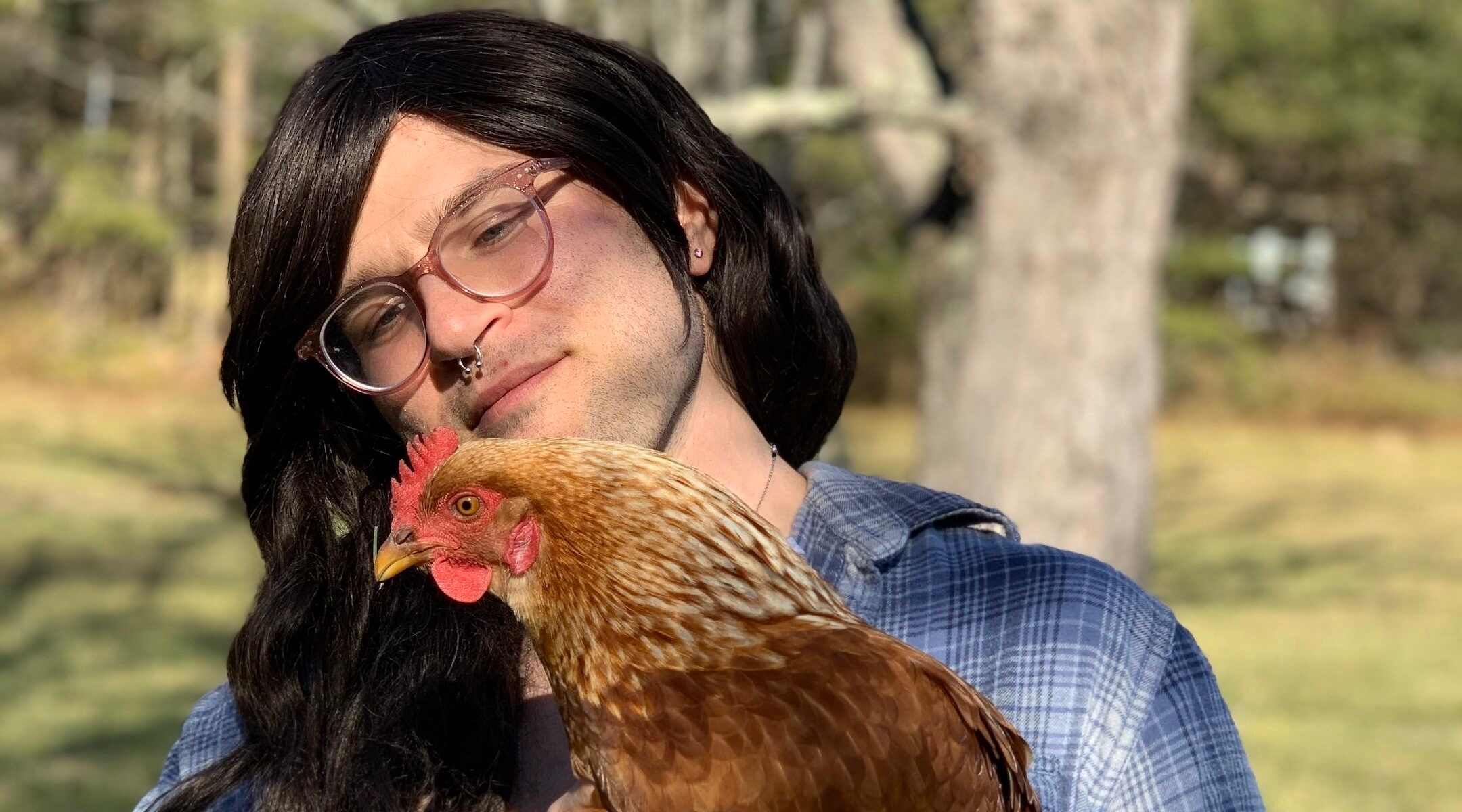 (JTA) — Alex Kohanski began using the gender-neutral they-them pronouns on their first day of the Jewish farming fellowship Adamah in the fall of 2019.

Though they were assigned a male identity at birth, Kohanski had never felt fully at home in their body. As a child, they once looked at their naked body in a mirror and thought God had made a mistake.

But over the course of the three-month program that has graduated scores of Jewish farmers, Kohanski grew more comfortable — both with their choice to pursue farming as a profession and with their transgender identity, even wearing a dress in public for the first time. In one particularly poignant moment, Kohanski was invited by the women in their cohort to join them for a pre-Shabbat mikveh dip in the lake.

By the time the program ended, Kohanski was identifying as trans.

“I went to Adamah because everyone was telling me this is like a great queer place to learn, like you will meet many trans and queer Jews there,” said Kohanski. “It’s like a mecca for that kind of thing.”

It’s a little-noticed feature of the booming Jewish farming space that among the many who find an emergent Jewish identity through the cultivation of soil are a minority who find something more: a new relationship to gender.

No fewer than 10% of participants in Adamah over the program’s 17-year history have changed their gender pronouns in the course of the fellowship, according to Shamu Sadeh, the program director. The overwhelming majority have changed from feminine pronouns to gender-neutral pronouns.

The trans presence was hard to miss at the first Jewish Farmer Network conference last year, where the affinity table in the dining room for queer farmers frequently overflowed as participants bled into adjoining tables, often hanging around to talk long after meals ended. At least one in six participants at the 2020 conference were trans or non-binary, and at the 2021 virtual conference one in three registrants used non-binary pronouns.

“There’s something about exploring identities,” Sadeh said. “People who are in the process of balancing, figuring out, or just open to reconsidering their identity, between how they were socialized, how they were identified as kids. I also think there is something about body and strength, different versions of strength, and using your body in a productive way.”

Part of that is the deliberate effort to make Jewish farming spaces welcoming to trans and non-binary participants. Adamah has a well-earned reputation for radical inclusivity and the JFN conference organizers went out of their way to welcome trans farmers, even creating a panel at this year’s conference for them to share their experiences.

But part of it is also directly related to the experience of being close to nature and the healing power many trans farmers find in the physicality of farming and in the natural world’s indifference to how their bodies align with their gender identity. 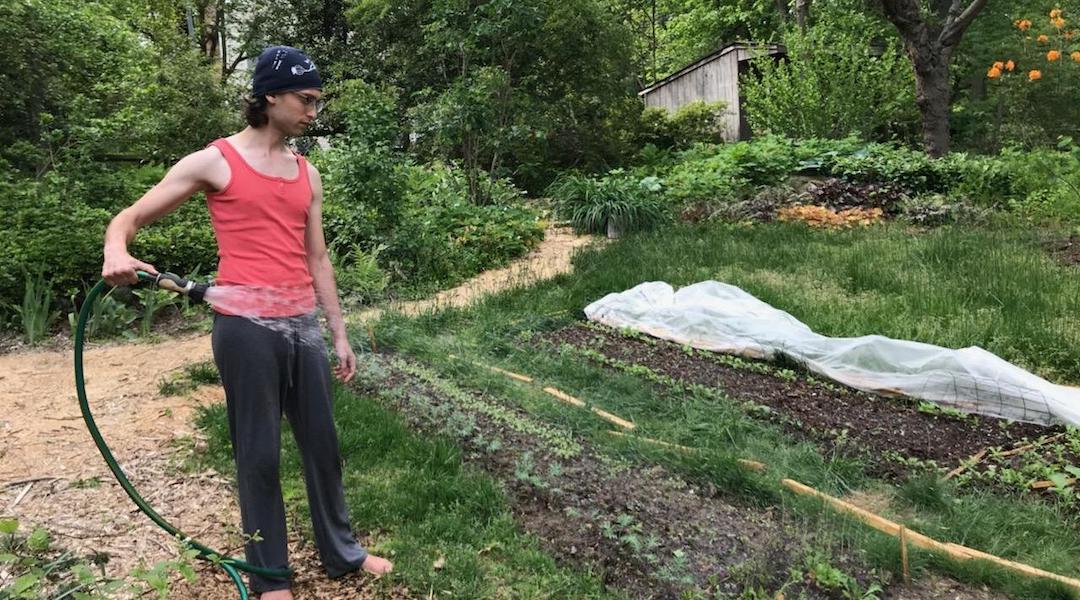 “There’s a home, a sense of belonging to the dirt,” said Simcha Halpert-Hanson, 35, a trans rabbinical student at Hebrew College who did Adamah in 2016 in part to heal from a painful breakup that resulted from their partner’s discomfort with their body.

“The trees literally don’t care what I am,” Halpert-Hanson said. “The water doesn’t care. Be any shape, any way. There is no concept of fat or thin. That’s immensely important to feel safe and feel belonging. And since the regular world, the civilized world, is so obsessed with standards and yardsticks, then it makes sense as a calling for trans folks to be able to spend their time in nature.”

Micah Chetrit, who founded the Midbar Project, a Jewish educational farm, on the grounds of a synagogue in Tucson in 2018, said the physicality of farming helped catalyze his embrace of his trans identity.

“It’s a connection to your body that you may never have felt before,” Chetrit said. “And that led me to think where else in my body is the feeling not authentic? And I think for anyone — and there are a lot of people who get into farming and realize they’re trans — I believe it’s because you are figuring out what doesn’t feel good. And if the gender stuff doesn’t feel good, if the identity doesn’t feel good, then you’re prompted to make that change.”

To some extent, the strong trans representation in the Jewish farming world reflects the changing demographics of American agriculture overall. The legions of young people drawn to farming over the past decade are far more likely to be female, non-straight and trans than farmers overall, who in the U.S. have traditionally been overwhelmingly white and male.

A 2017 survey of 3,500 farmers under 40 found that 1% identify as transgender and another 2% identified their gender as “other” or declined to specify. Nationally, estimates of the transgender population, while inherently difficult to ascertain, converge at around a half-percent.

In a 2017 paper, Isaac Sohn, a researcher at the University of New Hampshire who has studied queer farmers, reported three reasons trans farmers say they are attracted to life on the land that broadly map to what trans Jewish farmers report about their experiences. According to Sohn’s research, trans farmers like the gender-neutral dress associated with farming, the relative isolation of rural communities that permit space for gender development, and doing tasks typically reserved for cis men.

“I suspect that this is true across the Jewish and gentile farming world that there are a tremendous number of trans farmers,” said S.J. Seldin, one of the founders of the Jewish Farmer Network. “Even given barriers to income and wealth, it could even be disproportionate because of the healing that comes from being in relationship to land.” 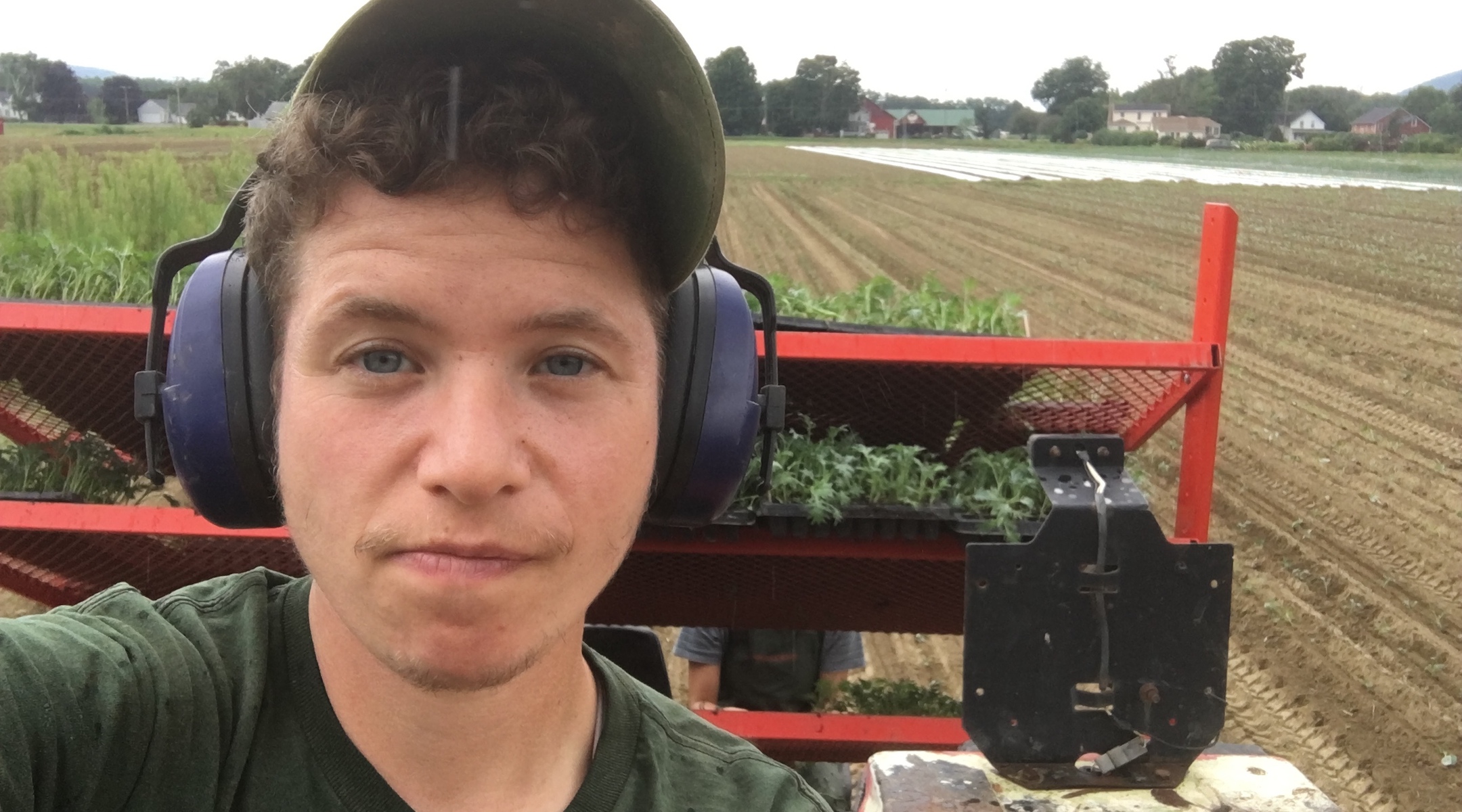 Seldin’s own experience makes the point. Until recently, they went by their birth name and use feminine pronouns. But over the past year, they came to recognize that they didn’t feel they were among their peers with cisgendered women. At last year’s JFN conference, they were continually drawn to the trans and non-binary Jewish farmers in attendance.

“That’s where I felt like I belonged,” Seldin said. “And I think that to have had that embodied experience of like, ‘Oh, this is where my soul is drawn to from a place of like, oh, this is who I am and who my soul is.’ I didn’t know that was one of my favorite parts of the conference at the time — or I think I did, but didn’t know why. And now, over a year later, it makes a lot more sense. That was your soul finding its people.”

Trans Jewish farmers broadly agree that there’s a natural overlap between farming, Judaism and their gender identity, but the nature of that relationship is complex and often hard to disentangle.

For some, there’s a natural refuge from the inner turmoil of gender dysphoria in the non-judgment of the natural world. For others, it’s rooted in the physicality of the work and a renewed connection to their body. Still others find it in work that’s typically solitary and more often than not performed at a remove from societal expectations, which lifts the veil off an inchoate sense of transness and offers a safe place to try on an emerging identity. For most, there are overlapping elements of all three and more.

“There’s one memory of laying on a pile of compost and understanding my trans identity deeper,” said Shai Schnall, 30, a shepherd in Mendocino County, California. “All of my previous life experiences are true and honest and me and I’m composting them and growth is coming. And something new that is also true and also aligned and deeply Jewish is coming to life because I’m giving myself that space to decompose. So I’m just like, birth and death and renewal that exists in plants exists in my trans identity, exists in my Jewish identity. It’s all there.” 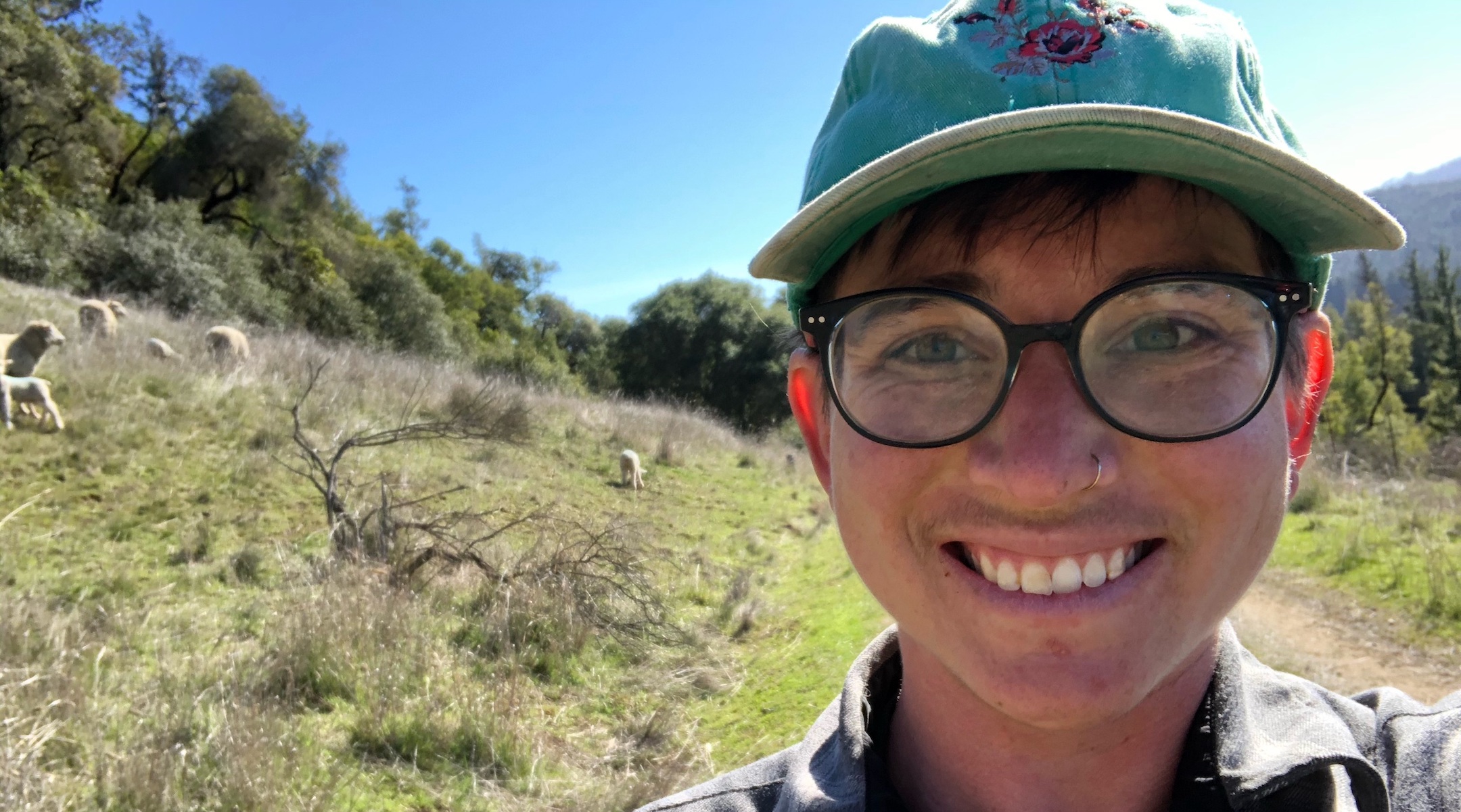 Shai Schnall is a shepherd on a farm in Mendocino County, California. (Courtesy of Schnall)

Through their mid-20s, Schnall identified as a straight cisgendered woman. But in 2016, at a Jewish celebration of the new Hebrew month attended by queer and trans Jews, a friend described herself as a trans-femme and a lightbulb went off in Schnall’s head. They began using they/them pronouns as a way to give shape to long-simmering feelings about gender they were never able to articulate. In 2019, Schnall began to identify as transgender after moving to California to work at Sister Moon Farm, a queer Jewish farm in Potter Valley.

“Coming out to the farm at Sister Moon, where folks didn’t know me, and I was able to just say what felt true,” Schnall said. “I was able to say I’m trans-masc and also really want to still wear sparkles. And just like the complexity of gender was able to take shape there in a way where I wasn’t putting the same norms or expectations on myself that I was in other places.”

For Shoshana Mackay, a trans woman who lives on a Jewish farm in North Carolina, her journey to farming preceded her embrace of her trans identity. But once that process began, she began to notice all kinds of gender non-conforming behavior in the plant and animal world, which provided a sense of comfort that her trans identity wasn’t some aberrant impulse she had to justify.

“There’s a lot of energy for some trans people, myself included, convincing ourselves that this experience is valid and legitimate,” Mackay said. “And so to see like a goat that is biologically female — egg-producing, pregnancy-having, with an ovary — behave in a host of behaviors that a goat vet will tell you are male goat behaviors … it’s just nature throwing darts at a board and it’s beautiful and it’s a part of ecology.”