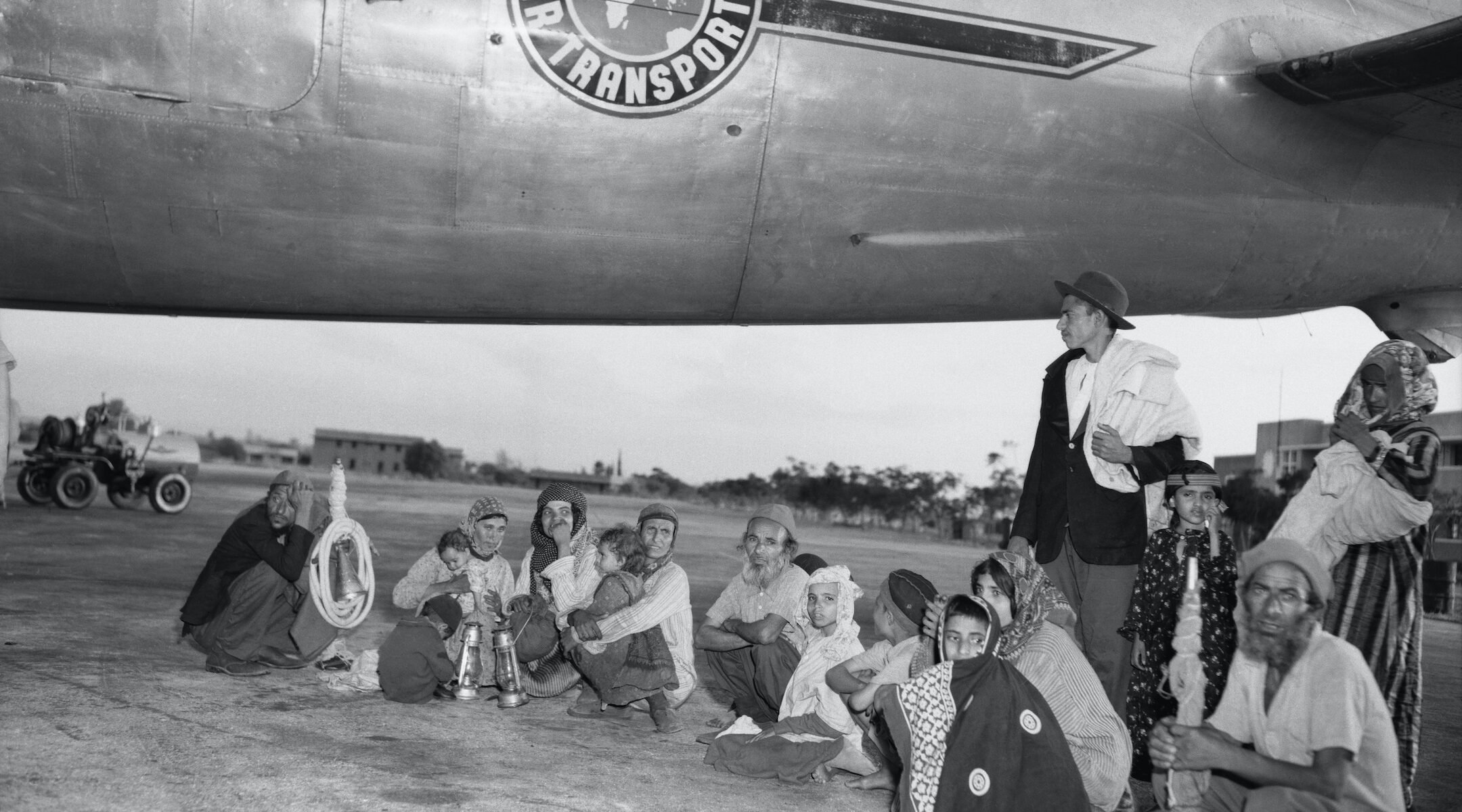 A view of Yemenite Jews who were flown into Israel in 1950 under "Operation Magic Carpet." (Bettmann/Getty Images)
Advertisement

(JTA) — The Israeli government approved a plan Monday to provide compensation of up to $60,000 to some of the families of children who went missing while in state care in the 1950s.

But advocacy groups and several of the families have already rejected the plan, calling it a cynical move designed to silence their larger demands for accountability. They are demanding an official apology, an expansion of the eligibility criteria, and further access to state records that might shed light on the fate of their relatives.

The compensation plan — amounting to roughly $50 million — represents a new phase for what Prime Minister Benjamin Netanyahu this week said was “among the most painful affairs in the history of the state of Israel.”

Over the years, hundreds and perhaps thousands of Jewish families from Middle Eastern countries, chiefly Yemen, reported that their babies and small children disappeared in the decades following Israel’s establishment.

Many suspected that hospital and social work officials abducted their children and gave them away to Ashkenazi families in Israel and the United States, who were thought to be better caretakers and, in some cases, had lost their own children during the Holocaust.

A full inquiry into the allegations has never been carried out, but several state commissions concluded that most of the missing children must have simply died and were hastily buried. The commissions dismissed claims of any conspiracy to abduct the children.

Still, Netanyahu said, “The time has come for the families whose infants were taken from them to receive recognition by the state and government of Israel, and financial compensation as well.”

Roughly a million Jews from Middle Eastern countries arrived in Israel after the country’s founding in 1948. Many of these Mizrahi immigrants were relegated to poor and crowded housing conditions or to tent dwellings in the country’s periphery while Ashkenazi immigrants from Europe received preferential treatment in employment, education, and other areas.

This painful period contributed to an ethnic divide that persists in Israel to this day, as seen in voting patterns, for example. Netanyahu’s Likud party found a formula for electoral success by appealing to the historic wounds of Mizrahi Jews.

Among Yemenite Jews in Israel today, it is common to hear stories of relatives who died mysteriously at a young age or went missing without explanation. Some in government and academia have suggested that whatever happened was not malicious but rather the tragic result of the chaos of Israel’s early years, when the country was poor, war-torn and overwhelmed by the influx of immigrants.

Many believe, however, that some officials took advantage of the chaos and the linguistic barriers of those days to systematically kidnap children from hospitals and clinics and deliver them to Ashkenazi families.

Families were told their missing children died from illness but most were never shown a burial site. Suspicions were inflamed in the 1960s as many families received mailed military enlistment orders ahead when the children would have come of age for service.

Three government-appointed commissions that looked at the claims said they found no evidence of collusion to disappear the children. Journalists and independent researchers have since repeatedly surfaced evidence that pokes holes in the commissions’ findings.

To be qualified for the new payments, a family must be among the 1,000 or so who have previously reported their case to authorities. The window to apply for money runs from June 1 to Nov. 30, and applicants must sign a waiver releasing the government of any further liability.

In cases where it is clear that a child died and the family was not notified, families are eligible for about $45,000. In other situations, where the child’s fate is unknown, the payment is about $60,000.

The statement announcing the decision said the government “regrets” what happened and “recognizes the suffering” of families. “It is not in the power of a financial plan to provide a remedy to the suffering caused to families,” the statement said. “However, the State of Israel hopes that it will be able to assist in the process of rehabilitation and healing of the social wound that this affair has created in Israeli society.”

Advocates who have been campaigning for years on this issue said the plan falls short.

Amram, a group that has collected accounts from some 800 families, said the compensation plan was inadequate because it was drafted without direction from the families and without acceptance of responsibility or apology.

“Without this component, a process of correction and healing isn’t possible,” the group said. “Amram repeatedly demands that the state of Israel take responsibility for the severe injustice.”

Activist Rafi Shubeli, whose Forum Achai represents some of the families, also said the proposed resolution is a unilateral action by the government and will not lead to reconciliation.

“Our struggle will continue,” he was quoted as saying by the Associated Press. “This affair isn’t going away.”