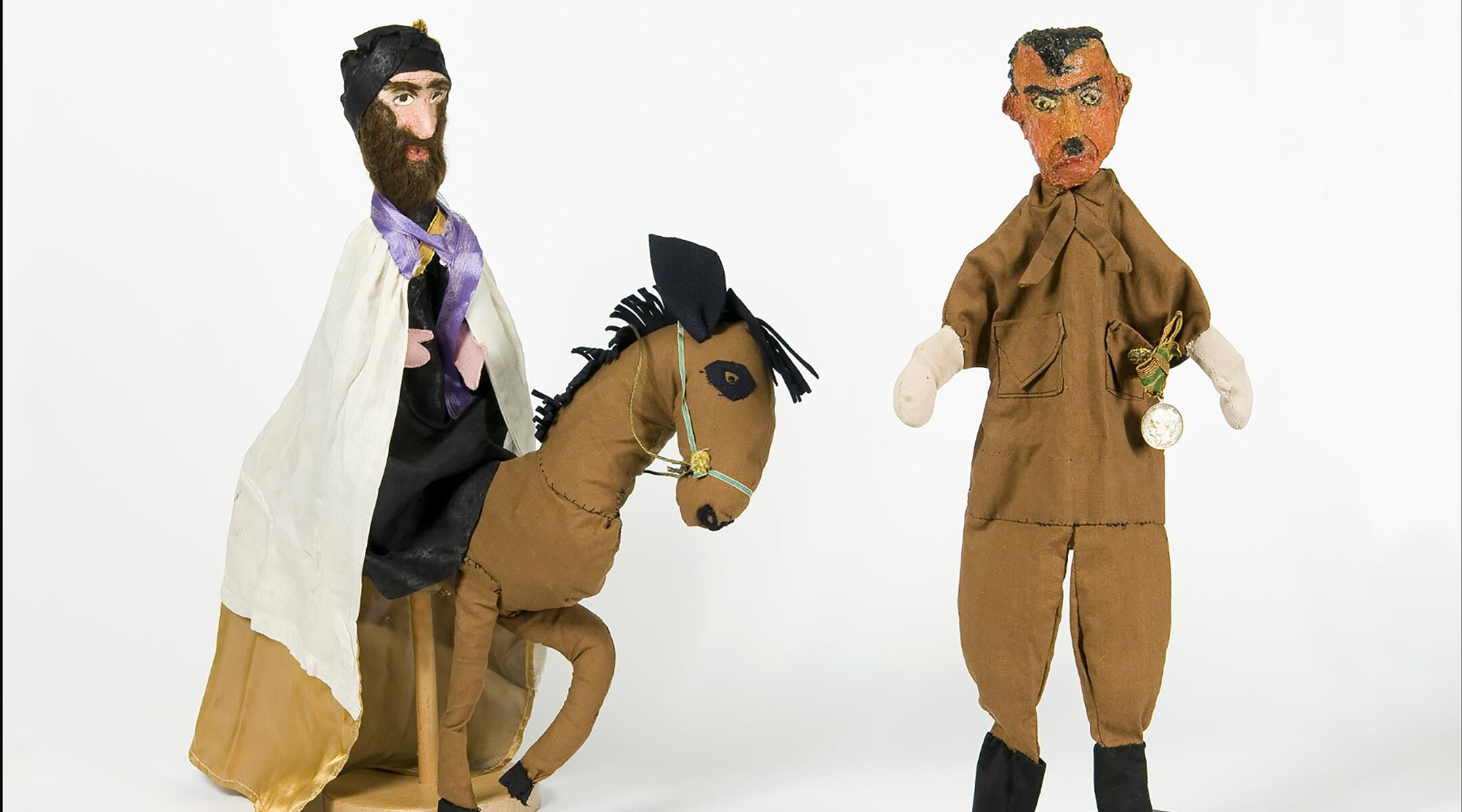 Puppets of Mordechai and Hitler made by Nechama Mayer-Hirsch in 1951. (Courtesy of the Jewish Historical Museum of Amsterdam)
Advertisement

(JTA) — When she was 10 years old, Nechama Mayer-Hirsch sat down to make puppets for a Purim spiel and crafted one of the man responsible for her father’s murder.

The puppet version of Adolf Hitler wasn’t Mayer-Hirsch’s favorite from the set she produced for the Purim theater show in 1951. That designation went to Queen Esther, the heroine who foils the planned murder of Persia’s Jews by Haman, an official who ends up getting executed by hanging by his master King Ahasuerus.

But it was the most unusual. Rather than portraying Haman with his trademark three-pointed hat, her puppet had Hitler’s mustache and wore a brown gabardine suit.

“I just figured he needs to be Haman, that this role fits Hitler,” Mayer-Hirsch, a decorated historian who has specialized in documenting Dutch Jewry beyond Amsterdam, told the Jewish Telegraphic Agency.

The puppets joined a storied tradition of fashioning Haman after real-life oppressors that peaked in the immediate postwar years. And seven decades later, Mayer-Hirsch’s childhood work is in the collection of the Jewish Historical Museum of Amsterdam, where curator Peter Buijs says the Hitler puppet is a “unique item” that provides a window into how Holocaust survivors used Hitler imagery to work through their traumas.

Today, many in Europe, and especially Jews, would find it inappropriate to make and display Hitler puppets, Buijs said.

“But in the immediate aftermath of World War II, it was a more natural sentiment, especially for people whose lives were torn apart because of the Nazis,” he added.

Hitler himself suggested that he saw himself in Haman. In a Jan. 30, 1944, radio speech that wrongly identified the Persian king as Jewish, the Fuehrer said that if Nazi Germany did not prevail, “the devastating Jewish Ahasuerus could celebrate the destruction of Europe in a second triumphant Purim festival.”

One striking example of a Purim-related Hitler depiction was documented in 1946 at a displaced persons camp in Landsberg, Germany, near Munich. Not even a year after the Nazis’ defeat, Jewish Holocaust survivors living in Landsberg put on a Purim spiel dramatizing the arrest and execution of Hitler, who had committed suicide 11 months earlier.

That spiel, which was one of numerous Hitler-themed spectacles put on for Purim by Jews in the postwar years, also featured at least one child wearing an oversized concentration camp inmate’s uniform. The child posed for photos smiling next to men dressed up like soldiers who firmly held a refugee portraying Hitler while wearing uniforms and a swastika-shaped necktie.

“In the DP camps, these plays sometimes took the form of revenge fantasies against Adolf Hitler and other Nazi leaders,”  the museum’s website says. “A number of photographs document scenes of Hitler hanging from the gallows, Hitler and Joseph Goebbels as paupers begging in the street, or Hitler burned in effigy.”

One of the most striking syntheses between Purim and the Holocaust was made in 1944 by a Moroccan Jewish teacher and scribe from Casablanca named Prosper Hassine. On a long strip of parchment, he penned a seven-chapter text he titled “The Book of Hitler.” It uses archaic biblical language to chronicle the history of the Holocaust and of North African Jewry in the first half of the 20th century.

The book by Hassine, who immigrated to Israel and whose family donated his book to the Yad Vashem Holocaust museum, does not have a happy end. But it does retell the liberation of Morocco by the Allied forces.

Persecution in Europe may have promoted the Purim story from obscurity to a major holiday in the first place, according to Yuval Malachi, an Israeli historian and owner of the Historia podcast.

“The story of Purim may be rooted in events that happened somewhere in the fourth century BCE, but it remained relatively unknown among Jews until Maimonides issued guidelines about it in the 13th century,” Malachi told JTA, noting it was the first time that a rabbinical figure determined that Jews are supposed to get completely drunk on the holiday.

The story of Purim, recounted in a text called the Book of Esther and believed to have been written somewhere between the third and fifth centuries, “resonated with Diaspora communities that had experienced pogroms and persecution because it’s a story about surviving exactly this sort of hostility.”

The custom of creating Purim effigies is so organic to the holiday that it predates even the tradition of dressing up on Purim, which is widely thought to have emerged sometime before the 15th century in Italy as a Jewish counterpart to the Carnival dress-up traditions in Venice, Rome and beyond.

But Jews had been making puppets and effigies – including of their enemies — for centuries earlier, Malachi said.

“Until recently, dressing up on Purim was an unknown concept in Middle Eastern Jewish communities. But making a puppet of Haman and hanging it on a tree near the synagogue was the holiday’s highlight for centuries in Yemen, for example,” he said.

The puppets would often get burned, “but in Europe this led to hostility from non-Jews who thought the Jews were burning effigies of Christians, so it stopped in Europe,” Malachi said.

In Azerbaijan, couples from the Mountain Jews community had a role-playing tradition around a Purim villain effigy, according to Malachi. While the man was out praying, the woman would paint a face on a wooden log. The man would demand to know who is in his home, the woman would pretend not to have noticed, and the man would tell her the log was the evil Haman and would chop it up and burn it.

A Hitler Purim effigy made its first documented holiday appearance in 1934 at Israel’s main Purim event, the Tel Aviv annual float procession called the Adloyada. (The name is a reference to the Aramaic-language rabbinical commandment in the Talmud that Jews get drunk on Purim “until they can’t tell apart the blessed Mordechai from the accursed Haman.”) The open-mouthed Hitler effigy was depicted riding a tank with guns pointing at terrified children.

After the war, Hitler effigies were burned regularly In Israel and Europe well into the 1970s at traditional bonfires on Lag b’Omer, a holiday that commemorates the end of a plague that killed thousands of an ancient rabbi’s students.

In the predominantly haredi Orthodox community of Antwerp in Belgium, Hitler effigies are still burned today at Lag b’Omer fires. But in most places today, Hitler-related imagery is taboo, and Purim celebrations typically focus on the festive.

This became evident in 2006, when a high school senior from Omer, an affluent suburb of Beersheba, provoked an outcry from Holocaust survivors and others for winning his school’s costume contest for what his critics thought was a Hitler get-up.

Miriam Yahav, a well-known Holocaust survivor from Poland who died in 2018, complained about the costume to the Maariv daily, which ran the story on its front page. She called the costume “unforgivable” and wondered, “as someone who beat Hitler, what is becoming of this society?”

A spokesman for the Omer municipality, Nir Nisim, apologized for the affair, “which regrettably can be misinterpreted to mean that Hitler is a role model.”

The student also apologized. But, he added, he didn’t dress up as Hitler at all, but rather as the caricature of Hitler performed by Charlie Chaplin in his classic 1940 film “The Great Dictator.” (Others have made the same mistake: An American weather forecaster recently had to apologize after she chuckled over a cat named “Kitler” whose picture appeared on air. “I think Kitler kind of looks like Charlie Chaplin here,” she said.)

For her part Mayer-Hirsch, whose Hitler depiction is being preserved for history, said she didn’t recall any angst about including the Nazi leader in Purim celebrations. After being placed with a foster family during the war, she was reunited with her mother, who survived and later remarried.

“I suppose no one objected,” she said, “because I made those puppets with my two stepsisters for the whole family.”