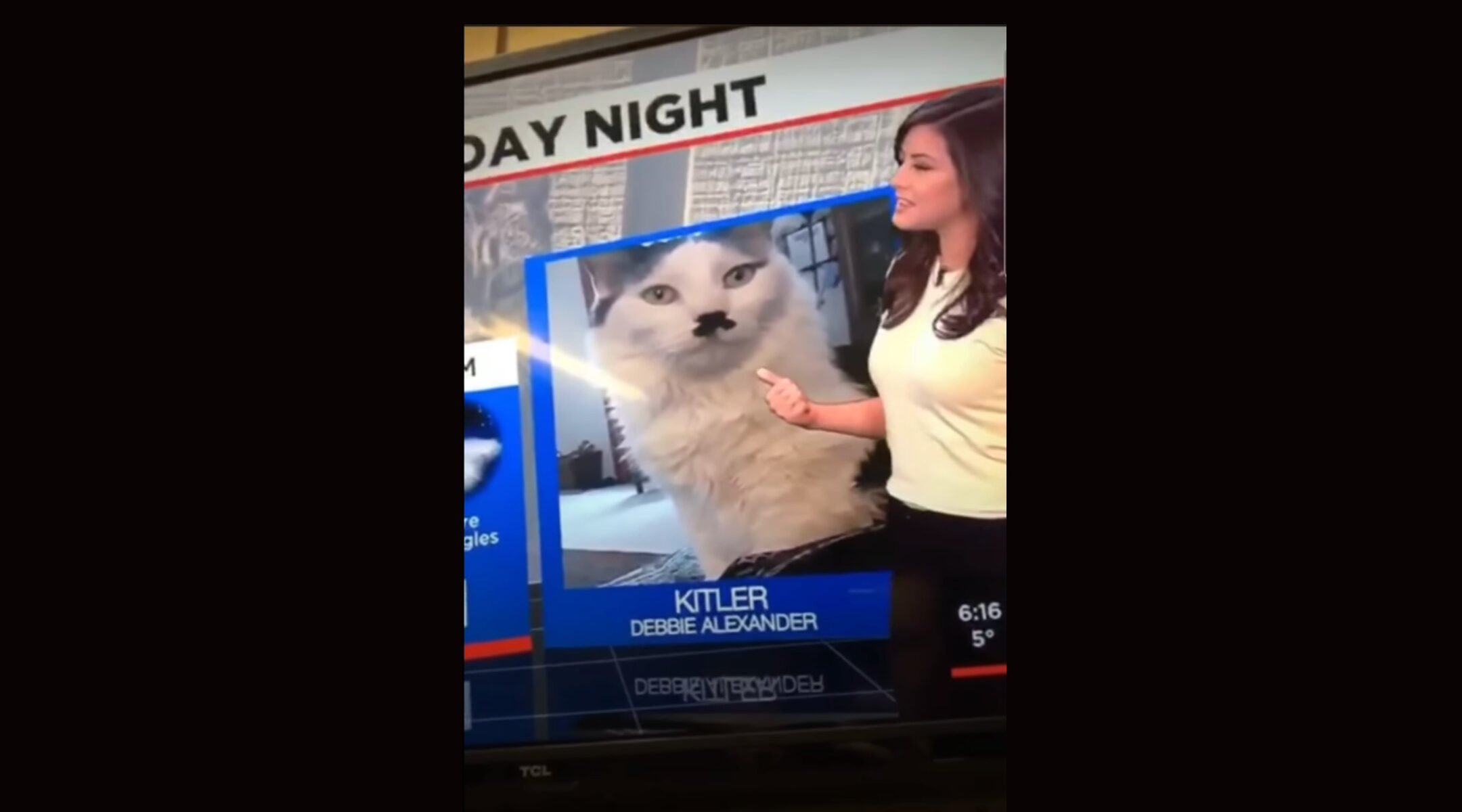 Alena Lee gave a shoutout to "Kitler" on her Saturday night weather broadcast. She apologized the next day. (Screen shot from YouTube)
Advertisement

(JTA) — Alena Lee, a meteorologist at Kansas City’s KCTV5, has a tradition: Every Saturday night, she features a pet submitted by a local viewer to be featured in a “Caturday” shoutout during her weather update.

This weekend, Lee pulled up a picture of a white cat with a black patch just below its nose whose resemblance to Adolf Hitler would have been obvious even if its name hadn’t been “Kitler.”

But it was, a fact that was spelled out in capital letters below the cat’s picture. And Lee read it without indicating that she saw anything amiss about the cat’s name. In fact, she said she saw another famous figure from the 1930s in the cat’s face.

“I think Kitler kind of looks like Charlie Chaplin here,” Lee said, referring to the comic star of silent films who was born just four days before Hitler in 1889. “Maybe we’re going to call him Charlie Jr.”

Viewers reacted negatively to the segment, questioning how the cat picture and name could have made it through the production process. “This is disgusting and you need to make a public apology immediately,” one local wrote on Twitter, tagging the news station.

On Sunday, Lee offered just that. Speaking on air, she explained that the picture had been given to her and said she had not set out to offend.

“I never intended to hurt or offend anyone by using the picture that was given to me,” Lee said, adding that she would not repeat the offensive name. “I understand my mistake and am deeply sorry. In the future, I will be more diligent with this content to ensure it doesn’t happen again.”

You can see the segment, with an offended viewer’s voiceover, here.

The Kansas City cat is hardly the only one whose markings give rise to the association: A “Kitler” board on the website Reddit has 25,000 subscribers. And an entire website, CatsThatLookLikeHitler.com, was created to showcase examples. The site says it is designed not to glorify the murderous Nazi leader but to “reduce him to an object of ridicule.” Two of the final four pets pictured on the site, which was last updated in 2014, were named Kitler.