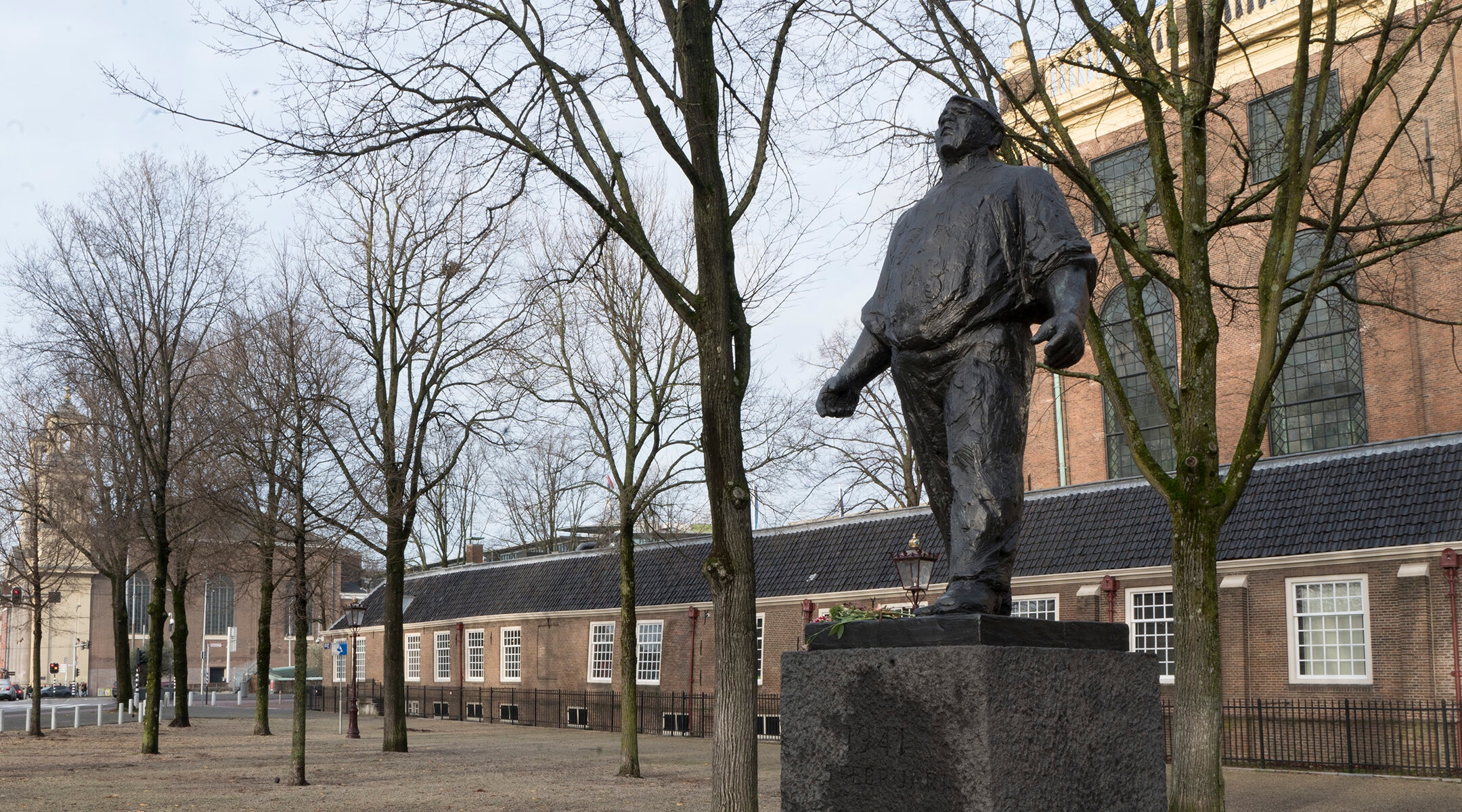 The Dock Worker, a statue that stands in front of the Portuguese Synagogue, was inaugurated in 1952 to commemorate the participants of the 1941 February Strike in Amsterdam. (Cnaan Liphshiz)
Advertisement

AMSTERDAM (JTA) — Eighty years ago on Thursday, this city was silent. The soft bell chimes of the ubiquitous trams, the main mode of local transportation and a constant presence to this day, were conspicuously absent.

It was the start of a consequential yet often-overlooked milestone of the Holocaust: the February Strike.

On Feb. 25, 1941, at least 100,000 Dutchmen stopped working to protest the Nazis’ persecution of Jews, bringing the economy to a halt for days. Although it was soon broken and German authorities retaliated with even more violence, it galvanized the Dutch resistance and became a lasting symbol of it. Today it is known as the first and largest act of civilian insurrection over the treatment of Jews during the Holocaust.

The strike also cemented the country’s positive image after World War II, depicting the Dutch as martyr-like resisters of Nazi rule — a  narrative that has begun to falter.

On Thursday, dozens of people, including Mayor Femke Halsema, gathered around a statue commemorating the strike for its 80th anniversary ceremony and laid wreaths at the statue. Among those present was Jessica de Vries, a Jewish woman whose late mother was a Holocaust survivor. Her mother “never missed a single commemoration ceremony,” de Vries told Het Parool.

“It meant the world to her that others protested the persecution of Jews. She passed on to me this gratitude and the feeling of not being alone. We always came here together,” de Vries said, “and now that she’s gone I come here for her.”

The annual ceremony around the statue — this year’s was limited by social distancing measures — once was Amsterdam’s main Holocaust commemoration event. In recent years, however, the rite has been diminished in favor of other commemorations, such as events remembering the Kristallnacht pogroms anniversary and the May 4 national Memorial Day, which both focus on the 107,000 victims of the Holocaust in the Netherlands rather than on the people who protested their persecution.

The shift has been part of a broader growing awareness about Dutch complicity in the Holocaust. It was a rampant phenomenon that contributed to the Netherlands having the highest death rate (75%) of Jews in the Holocaust of any Nazi-occupied country in Western Europe. Yet this reality had been eclipsed for decades by the country’s sterling reputation, thanks in part to the resistance’s efforts to save Anne Frank.

“Despite having the worst record of any Western country, Holland has for a long period of time maintained a positive image,” Suzanne Rutland, a prominent Jewish studies researcher from the University of Sydney, once wrote in an essay titled “A Reassessment of the Dutch Record during the Holocaust.”

Back in 1941, the strike was preceded by other historic events.

A few days earlier, a large group of Dutch Nazis crossed Amsterdam’s Blue Bridge over the Amstel River and, with a confident stride, walked in the direction of the city’s main synagogues.

It was part of a series of intimidating actions by the militia of the local NSB Nazi party against Jews following the German occupation of the Netherlands the previous year. The perpetrators were so complacent that they didn’t even bother to come armed.

The sortie did not go as planned for the militia members, however. They were greeted by dozens of Jewish men wielding iron bars that had been prepared in advance following a previous raid. A brawl ensued, ending with the Nazis’ retreat and the death of one of their leaders, a hardware store owner and father of eight named Hendrik Koot.

It prompted a deadly German response. Shortly after the bridge scuffle, occupying authorities rounded up about 400 Jewish men in Amsterdam, all of whom were deported and murdered except for two survivors. New research shows that a quarter of the men were killed near the Mauthausen concentration camp in an experimental gas chamber in preparation of that invention’s deployment from 1942 onward as part of the Nazi “final solution” for Jews.

Within days of those arrests, death notices with falsified information, citing diseases and cardiac arrests, were delivered on Friday night to the victims’ families by rabbis working for the Jewish Council, a body that the Nazis forced local Jews to establish so they could better control the Jews.

“This unusual move by the Germans was designed to instill terror,” said Johannes Houwink ten Cate, a historian and one of the Netherlands’ leading Holocaust scholars. He added that the Nazis “as a rule did not inform Jewish families of the deaths of their loved ones.”

As the first mass murder of Jews anywhere in Western Europe and the first major atrocity committed in the Netherlands by the Nazis, the February arrests indeed terrorized Amsterdam’s Jews. But in a city where Jews have been a part of the fabric of society for centuries, the action would not go unanswered.

On the morning of Feb. 25, the silence was deafening.

“Beginning the strike with the public transportation was brilliant because this meant you didn’t need to spread the word,” ten Cate said. “Within 15 minutes of the strike, the whole city knew.”

But the strike’s organizers, primarily local union members with communist affiliations, also circulated flyers with the headline “Strike! Strike! Strike!” — a slogan that remains a local icon of the war years today.

The flyers specifically mentioned Jews, an unusual action at a time when resistance movements across Europe sought to avoid such distinctions.

“We demand the immediate release of the arrested Jews!” the flyers read. “Show solidarity to the targeted Jewish part of the working population! Extract Jewish children from Nazi violence, take them into your families!”

The strike spread to five other municipalities in the Amsterdam vicinity — Hilversum, Utrecht, Weesp, Zaanstad and Velsen — and lasted for two days before the Germans and their collaborators ended it. The German occupation forces went on a manhunt for the organizers, killing nine. One was Leendert Schijveschuurder, a Jewish communist with the tragic distinction of being the first Dutch civilian whom the Germans executed by firing squad in the Netherlands.

The occupiers also stepped up their persecution of Jews and quickened their removal from the public sphere following the strike, according to historians Jacques Presser and Ben Sijes. However, following the strike, roundups and deportations mostly happened at night in the Netherlands and throughout much of Western Europe, where the Nazis took far greater efforts to conceal their actions than in the east.

After the show of solidarity at the February Strike, “the occupying forces tried to avoid overt violence,” the Anne Frank House, a private museum housed in the family’s old hiding place, wrote on its website.

Pleun de Kort, a research assistant with the University of Amsterdam’s Holocaust and Genocide Studies program, called the strike a mix of “bravery and fiasco” in a 2014 article because it did not have “the effect hoped for” by its organizers.

But longer term, de Kort wrote, the strike helped consolidate a sense of solidarity that galvanized resistance to the Nazis. It also empowered Jews, according to Presser, who in a 1965 book wrote that “for many Jews, it was one of the most powerful experiences during the occupation” because they felt the general society had their backs.

Legacy after the war

For decades, Dutch authorities and society highlighted and celebrated the strike, which bolstered the country’s relatively positive image in the postwar years. Queen Juliana, whose own mother was accused of being indifferent to the Holocaust, in 1952 inaugurated a statue for the heroes of the strike.

The statue, which now stands in front of the Portuguese Synagogue in the Jewish Cultural Quarter of Amsterdam — the area that used to be the heart of Jewish life here — depicts a burly dock worker striking a defiant pose.

But the narrative has changed over time, as research has uncovered rampant Nazi collaboration by Dutchmen that led to the murder of at least 75% of their Jewish compatriots.

One study from 2013 showed that thousands of Jews were traced down by professional Jew hunters known as the Henneicke Column, named after Wim Henneicke, a taxi driver. They collected a per capita bounty of at least 7.5 guldens — the equivalent of a week’s wages working as unskilled laborers.

Another discovery from that year underlined the callousness with which survivors were met upon their return. In Amsterdam and a dozen other municipalities, the survivors were made to pay property taxes that they had failed to pay because they were hiding from the Nazis or in camps.

Following these discoveries and others, Dutch Prime Minister Mark Rutte for the first time apologized last year for how the wartime government in exile and authorities “failed in the responsibility as provider of justice and security” for Dutch Jews. Rutte and his predecessors for years had resisted calls to apologize long after the governments of countries such as Luxembourg, Belgium, France, Germany and Austria had said they were sorry about their citizens’ wartime actions.

In response, enthusiasm for commemorating the February Strike has diminished. But that’s not a bad thing, according to ten Cate.

“In a way, the way things stand is more honest,” he said. “And we now focus on Jewish suffering, not non-Jewish heroism.”