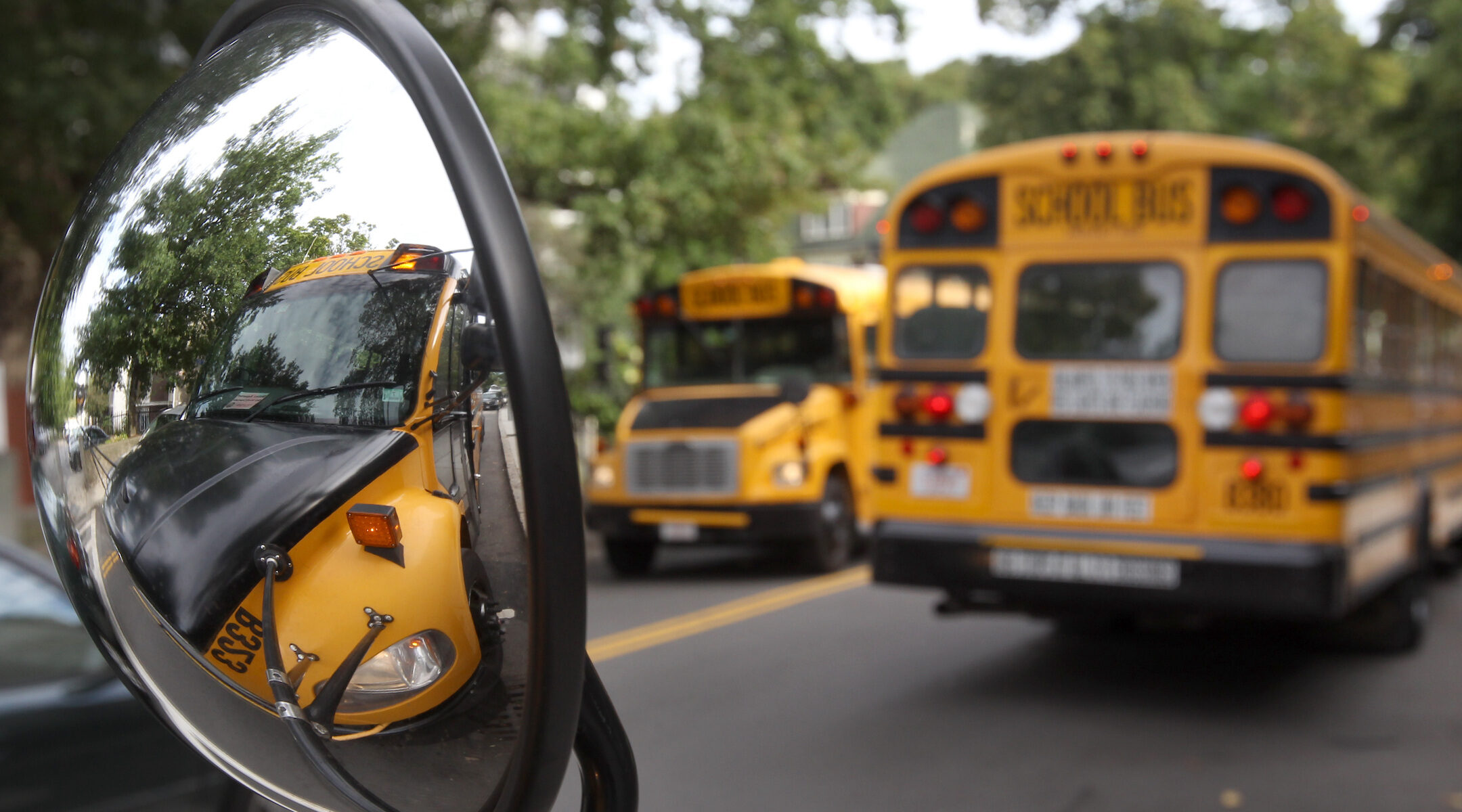 School buses in Boston lined up on the first day of school in 2014. (David L Ryan/The Boston Globe via Getty Images)
Advertisement

(JTA) — An unusually early Rosh Hashanah is causing cities across the United States to rethink the timing of the first day of school this fall, sometimes under intense pressure from families.

Rosh Hashanah, the Jewish New Year, begins in 2021 on the evening of Sept. 6 — it’s also Labor Day, in many places the traditional end of summer. A first day of school on Tuesday, Sept. 7, would require Jewish families to choose between religious observance and what they hope will be the first normal school day in more than a year.

So from upstate New York to Minnesota to suburban Washington, D.C., school districts are tweaking their schedules — or not, thus facing criticism from Jewish families and advocates for religious inclusion.

In Minnesota, where the Tuesday after Labor Day is the traditional first day of school, many districts have chosen to begin the school year earlier or later, although several are starting on Wednesday, the second day of the two-day Jewish holiday.

“The decisions of the various school districts recognize the importance of Rosh Hashanah as well as the reality that — hopefully — this will be the first somewhat normal school day in a post-pandemic academic world,” Steve Hunegs, executive director of the Jewish Community Relations Council of Minnesota and the Dakotas, told TC Jewfolk, a website about Minnesota Jews. “The school districts appreciate that, and appreciate the importance of all students beginning on an equal footing in this very important day of school.”

Some districts resolved the scheduling conflict long ago. The school board in Virginia Beach, Virginia, voted to rework the calendar for the 2021-22 school year last April. And at least one Minnesota district, Robbinsville, made the switch years ago after being alerted to the conflict by Jewish families.

Others are considering changes now and running up against thorny questions about diversity, inclusion, and the separation of church and state. As government entities, school districts are not supposed to make decisions on the basis of religion, though they can revise the schedule if so many students and teachers would be absent that operating school would be inadvisable. Making changes amid requests from one religious minority could also open the door to petitions from others.

A school board task force in Fairfax County, Virginia, a suburb of Washington, D.C., tried to balance those concerns by recommending that the district close on four holidays celebrated by a significant number of students and staff members: Rosh Hashanah and Yom Kippur, the Hindu holiday of Diwali and Eid al-Fitr, a Muslim holiday. Attendance data showed that teacher absenteeism was higher than average on all four holidays, and a higher-than-average number of students were absent on Yom Kippur and Eid al-Fitr.

After the district produced a schedule that did not include those days off, the board last week demanded a new version. The superintendent, Scott Braband, said he had erred by not prioritizing the board’s recommendations when planning for next year.

Local Jewish parents involved in an interfaith push to change the first day of school said doing so would benefit all students, not just those who observe Rosh Hashanah.

“Having days off is a way for children to learn to appreciate the diversity in their community and show respect,” Anna Stolley Persky, a Fairfax County parent who is working to have Jewish holidays recognized, told a Washington Post columnist. “Understanding different holidays becomes normalized.”

Chicago is weighing opening schools a week early, a proposal that district officials say is meant to add time for learning but followed comments from Jewish parents at a board meeting last month.

And families in the Williamsville Central School District outside Buffalo, New York, are pressing the district to reverse a decision to start school during Rosh Hashanah. The district has maintained Yom Kippur as a day off for decades, and this year it adopted Juneteenth, a holiday commemorating the end of slavery in the United States, as a day off. But the superintendent said changing the first day of school because of Rosh Hashanah had been considered and rejected.

Now parents are complaining, and the school board plans to address the schedule at a meeting this month.

“It’s our job to really listen to our community members,” the board’s president, Teresa Leatherbarrow, told the Buffalo News. “They are making it known to us that this is important to them.”

The Rosh Hashanah issue is present only in a fraction of the more than 13,000 school districts in the U.S. Especially in the South, many schools start well before Labor Day, meaning that students who do not attend during Rosh Hashanah never miss the first day. And some districts that do maintain a Labor Day start — sometimes required by lawmakers who want to ensure a full season for tourist attractions — have few or no Jewish students or teachers.

Plus, a few large districts have long baked Jewish holidays into their calendars. In New York City, for decades there were so many Jewish teachers and students that having classes on Jewish holidays was a fool’s errand. In the 1970s, Jewish teachers successfully lobbied to guarantee that the city’s spring break would always align with Passover.

Now the district has relatively few observant Jewish teachers or students; Orthodox schoolchildren in the city almost all attend private schools. But the expectation not to have school on major Jewish holidays has survived, at times resulting in quirky calendars, such as a five-day gap between the first and second days of school in 2010.

New York City added two Muslim holidays, Eid al-Fitr and Eid al-Adha, to its closure calendar in 2015. The following year it began closing schools for one day to mark the Lunar New Year, a holiday celebrated in Asian cultures.

David Bloomfield, a professor of education law at Brooklyn College and the CUNY Graduate Center, told the Jewish Telegraphic Agency in 2020 that he thought districts should ramp up their protections for students and teachers who miss school for religious reasons instead of trying to adjust the calendar to please everyone.

“With the growth and sensitivity toward diversity, it’s one thing for a hermetic community to observe its traditions,” said Bloomfield, who was involved as a parent when his own children attended New York City schools. “But as we become more diverse, we have a harder time accommodating all of those important ceremonial obligations.

“My answer would be not to pick and choose who’s worthy of accommodation, but to have a principle of secular disruption as opposed to a religious hierarchy.”