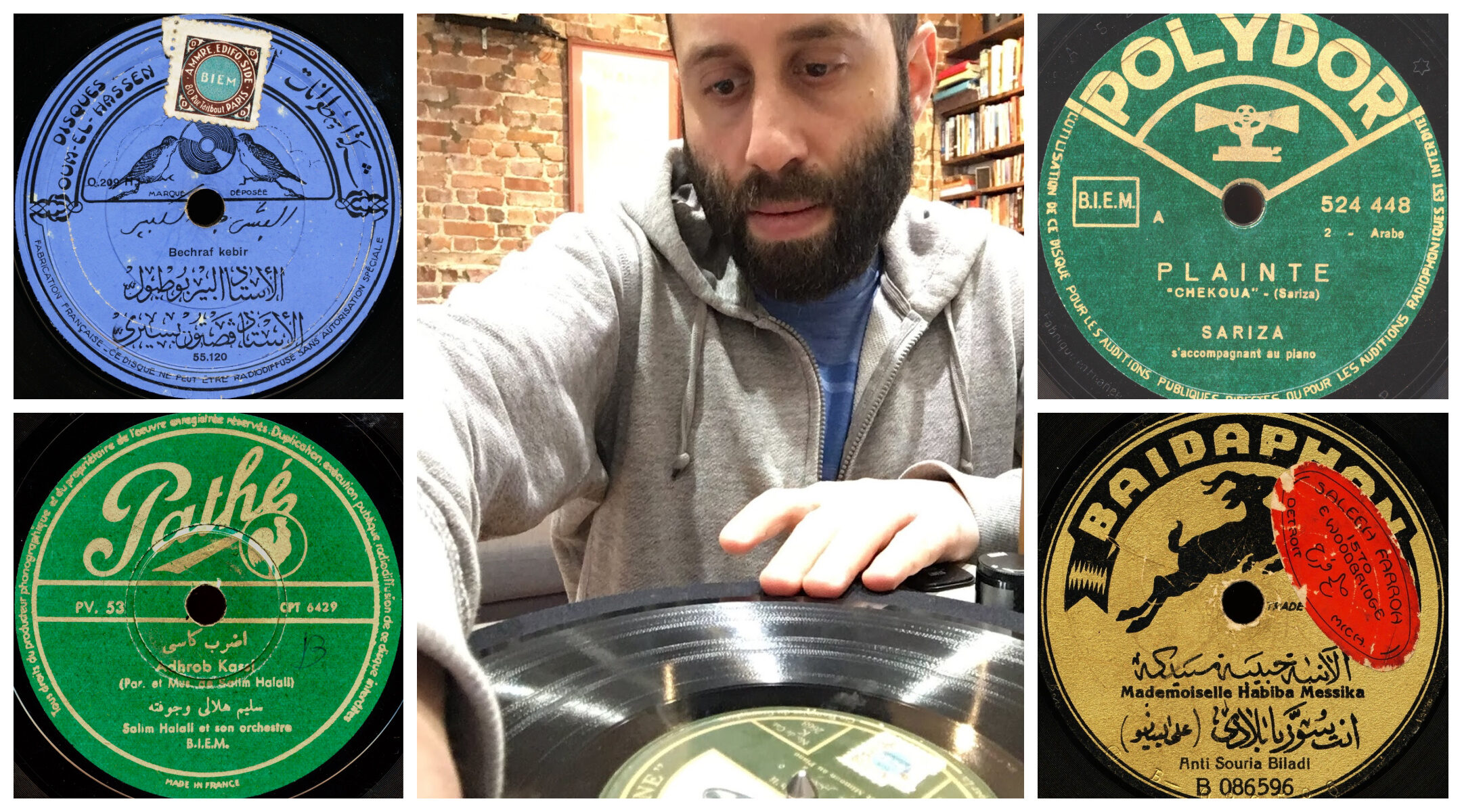 Chris Silver, a professor of Jewish History at McGill University, collects records from around the world for the first archive of North African Jewish music, currently housed in his apartment in Montreal. (Courtesy of Chris Silver)
Advertisement

(JTA) — The package from Estonia arrived the other day. More precious items, from Malta and Tel Aviv, are still in transit. As he waits for them in his apartment in Montreal, Chris Silver is stalking certain sellers on eBay or plotting a return to his favorite Parisian flea markets and Casablanca emporiums.

In this way, Silver has amassed a collection of rare phonograph records from the era of Jewish musical stardom in North Africa, a period roughly corresponding with the first half of the twentieth century.

A professor at McGill University, Silver now possesses about 500 albums recorded by Moroccan, Algerian, and Tunisian Jewish vocalists and instrumentalists. It’s the first archive of its kind.

But Silver estimates that the genre encompasses thousands of more titles — which are all in peril. That’s because the standard medium for the period was not vinyl, but shellac, a brittle material. Drop a shellac disc on the floor and it will break into pieces.

“Whenever I find one, no matter its condition, I always think it is a miracle because just by the nature of the material, it wasn’t supposed to survive,” Silver said.

The records in his collection represent a bygone musical world but they are also vestiges of the great Jewish communities that were once ubiquitous across the Maghreb, an Arab name for Northwest Africa. The hundreds of thousands of Jews who lived in the region emigrated in the aftermath of Israel’s founding and as France dismantled its colonial regimes.

The exodus happened in waves over the course of about twenty years, and the reasons for departure varied with social status and local conditions. The rise of Zionism and Arab nationalism combined to make these countries generally less hospitable to Jews.

And while there was a Jewish presence in various anti-colonial movements, many Jews had thrived under the French system, belonging to an elite class whose status came into doubt in the new era. Amid the chronic instability, many Jews sought opportunity in France, Canada, Israel and elsewhere, largely bringing an end to a 2,000-year-old diaspora.

Silver, who is Jewish but grew up in Los Angeles without a strong sense of Jewish identity, became interested in the music industry through his father. Roy Silver was not a musician, but rather worked as a manager for Bob Dylan, Bill Cosby, Joan Rivers, Richard Pryor, and many other artists. He was involved in the release of the experimental John Lennon and Yoko Ono album “Two Virgins,” that one featured a nude image of the couple on its cover.

With an upbringing that made him aware of the music industry’s potential for controversy and drama, Chris Silver flew to Morocco in 2009. The country and the wider region had captured his imagination in college, and he wanted to explore it for himself. One day on his trip, he visited a record store in Casablanca. The proprietor of the shop treated Silver to a musical journey, playing record after record and noting casually which of the artists were Jewish. A lot of them were, and Silver wondered what had happened to them after they had left the region and moved to countries where Arabic was not the dominant language.

In one famous example, singer Zohra El Fassia, a cultural icon in Morocco, moved to Israel and was quickly relegated to a remote, dusty corner of the country, with few opportunities to perform, as memorialized in a 1976 poem by Erez Bitton.

With time, Silver grew more curious to learn about the earlier period, the heyday of these artists. And he wondered if there was a richer history to be discovered beyond archival documents of conventional historical research.

The musical record provided what he was looking for. Each album usually indicated not only the name of the performer but sometimes also the composer and lyricist. The name of the record label and the place of pressing were important details. The lyrics and melodies encoded on the shellac told him many stories.

“Here we have a history of North African Jews in their own words in Arabic through the music, which is traditional and popular and everything in between,” Silver said.

He learned to listen for things like shoutouts naming members of the orchestra, or sudden interludes with a musician offering their personal story. He encountered the cultural seepage of American influences, as evident, for example, in Arabic renditions of the classic “Yes, Sir! That’s my Baby.”

Or, take the music that Tunisian Jewish star Habiba Msika recorded in the late 1920s in Berlin. Faraway from French protectorate authorities, she incorporated subversive messages about her homeland.

“On those records, if you listen to them until the end, she’ll shout out something like ‘Long live Egypt’ or ‘Long live the Independent Levant.’ And then the orchestra erupts into applause,” Silver said.

Msika’s daring artistic production and lifestyle earned widespread attention, including from Pablo Picasso and Coco Chanel, and tragically, from a murderous former romantic partner, who set fire to her apartment, killing her at age 27.

Famous and universally adored, the particular Jewishness of these musicians was not a secret. They openly identified themselves as Jews, and even if not, their dialects and accents gave them away. The first training ground for many Jewish artists was the Shabbat table and the synagogue, which generated a musical style that many non-Jews wanted to emulate, according to Silver.

“There are many stories of Muslim musicians who would position themselves outside of the synagogue on Saturday mornings to learn a new or different melody,” he said.

Silver has cultivated a global community around this musical repertoire. He shares tracks and commentary on social media and through a dedicated website called Gharamophone, a portmanteau of gharam, which means “love” or “passion” in Arabic, and gramophone. Over the past few years, he has racked up some 200,000 plays through SoundCloud alone.

One of the most important audiences he is serving is a younger generation of musicians in Israel and North Africa. They may have previously found a few low-quality YouTube videos, but now they have access to dozens of artists and hundreds of songs.

One of the best examples is offered by the musicians Neta Elkayam and Amit Hai Cohen. They are a married couple who live in Jerusalem and have performed to large audiences in their country, as well as in Morocco and all over Europe. Below is a clip from their live performance of “Abiadi,” an interpretation of and tribute to the Moroccan icon Zohra El Fassia.

“I never wanted to just collect or to possess,” Silver said. “I wanted to collect in order to bring the music back into conversation with people. Everything I’m endeavoring to do boils down to that. And I’ve had much success with it.”