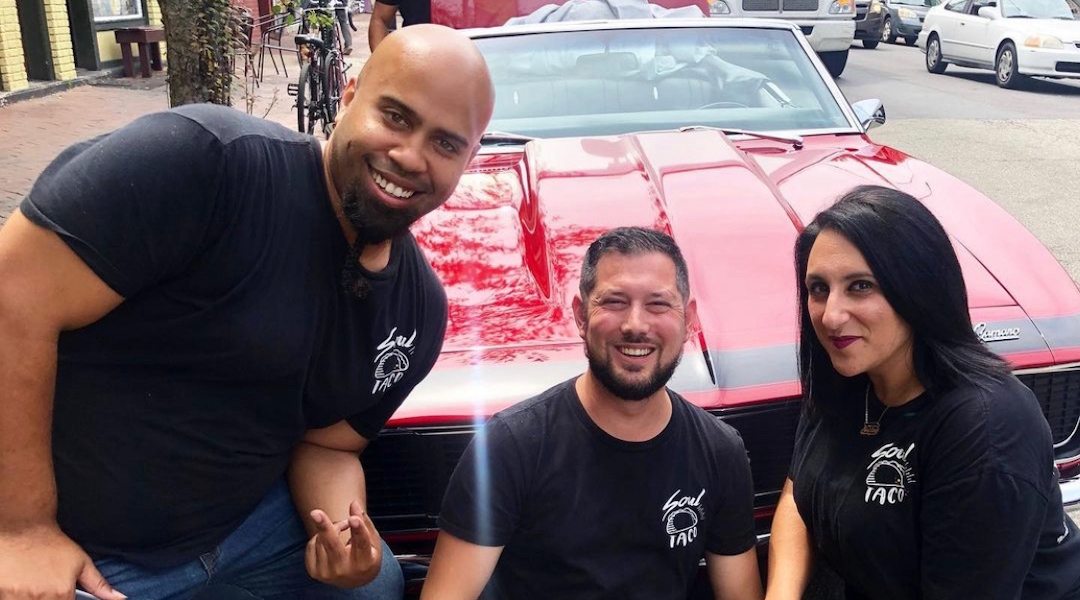 (JTA) — Like many Americans, Ari Augenbaum, Trey Owens and Narine Hovnanian closely watched the protest movement that followed the death of George Floyd during the summer of 2020. Floyd’s death sparked familiar discussions among the friends about the history of race and oppression in the United States.

The three restaurateurs, who run a popular Virginia eatery called Soul Taco, figured they would use food to serve up healing, history and, they hope, a unique dining experience.

During a late-night conversation at their Richmond restaurant, they decided to launch JewFro, a pop-up-style spot that fuses Jewish and African cuisines. (Richmond restaurants are open for in-person dining, although JewFro offers takeout service as well.)

“JewFro,” Augenbaum said, “was born out of a conversation that I’m sure many Americans were having about the Black Lives Matter protests.”

Augenbaum, Owens and Hovnanian already had experience melding cuisines: Soul Taco combines Latin American flavors and Southern food. Since its October 2018 opening, Soul Taco has enjoyed a meteoric rise, including being featured on a January 2020 episode of Food Network’s “Diners, Drive-Ins and Dives.”

JewFro by day is a Jewish deli that specializes in house-cured meats and artisanal sandwiches with African spices. By night, the eatery offers up classic Jewish and Israeli dishes with African flair, as well as modern takes on African dishes with Jewish flavors: grilled chicken marinated in South African Peri-Peri sauce over Israeli couscous, or Zigni (an Eritrean beef stew) brisket over matzah polenta with braised kale and stewed tomatoes.

A recent Sunday brunch featured fresh baked challah with house cured gravlax and Dukkah, the Egyptian nut and space blend. Diners could wash it down with a harissa mimosa, flavored with the Tunisian hot chile pepper paste.

While creating the menu, the three friends made an interesting discovery.

“When we started researching some of the dishes for this concept, we realized that a lot of the ingredients and cooking methods were almost identical,” Augenbaum said. In fact, “the similarities were more prominent than the differences.”

Augenbaum, a Jew from Maryland, credits Owens, an African-American from Richmond, with the idea that eventually gave birth to JewFro. 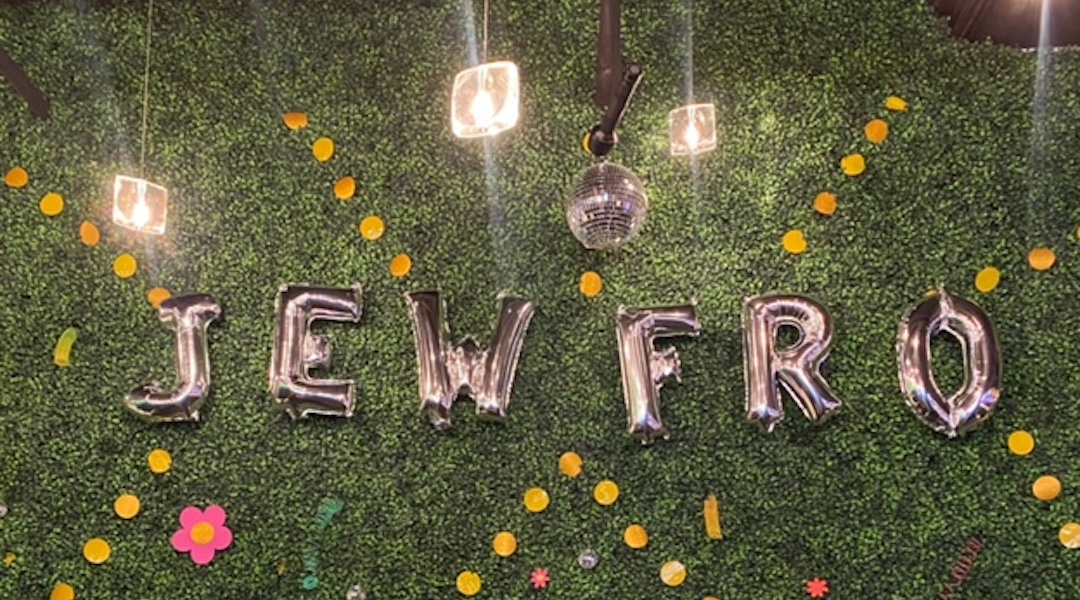 The entrance to JewFro features a disco ball. (Courtesy of JewFro)

“Trey proposed that we pay homage to both of our cultures as a show of unity through food,” Augenbaum recalled.

He and Hovnanian, an Armenian American, instantly thought it was a great idea. The similarities, they agreed, went beyond cuisine.

“While two-thirds of our ownership is white, all three of us come from a place where our people were persecuted,” Augenbaum said.

They all have years of experience in the restaurant and hospitality industry.

Hovnanian, whose parents were born and raised in Iraq and Jordan, is no stranger to Middle Eastern cuisine. From her parents she inherited a love for labneh, halvah and hummus, and she credits her Southern California upbringing with exposing her to various cuisines. In addition to her work as CEO at JewFro and Soul Taco, she runs two other restaurants and has both real estate investment and event production companies.

Owens, JewFro’s director of operations, points to his work on both naval supply ships and international cruise lines in fostering an interest in other cultures. He has spent the past 15 years working in the restaurant industry. Owens also serves on Richmond Mayor Levar Stoney’s COVID-19 restaurant task force. Along with his two business partners, he participated in Black Lives Matter marches last summer.

Augenbaum was raised in an Orthodox Jewish household where his family kept kosher and he ate classic Ashkenazi fare like potato kugel and gefilte fish. A gig with a kosher caterer at the age of 13 eventually led to decades of work in the foodservice industry, including running restaurants for celebrity chef Bobby Flay and Hollywood actor Ashton Kutcher. Along the way he picked up several awards from the Restaurant Association of Metropolitan Washington, D.C.

Augenbaum serves as JewFro’s senior culinary director, a position that allows him to indulge in his favorite pastime: experimenting with old cuisines and new recipes. He calls the decision to combine Jewish and African fare “bold.” The two cuisines, he says, are rarely fused.

“We haven’t seen any other restaurants doing this. I think that the main reason for that is that African food is not very prominent in American cuisine overall,” said Augenbaum, who trained with Morou Outarra, an American chef who hails from the Ivory Coast.

By contrast, “Jewish delis are popular and Israeli cuisine has become very popular in the last few years with Michael Solomonov at the forefront of that movement,” he said, referring to the award-winning Philadelphia chef.

However, “when it comes to Jewish food on a refined fine dining level, outside of the kosher world, there really is a lot less.”