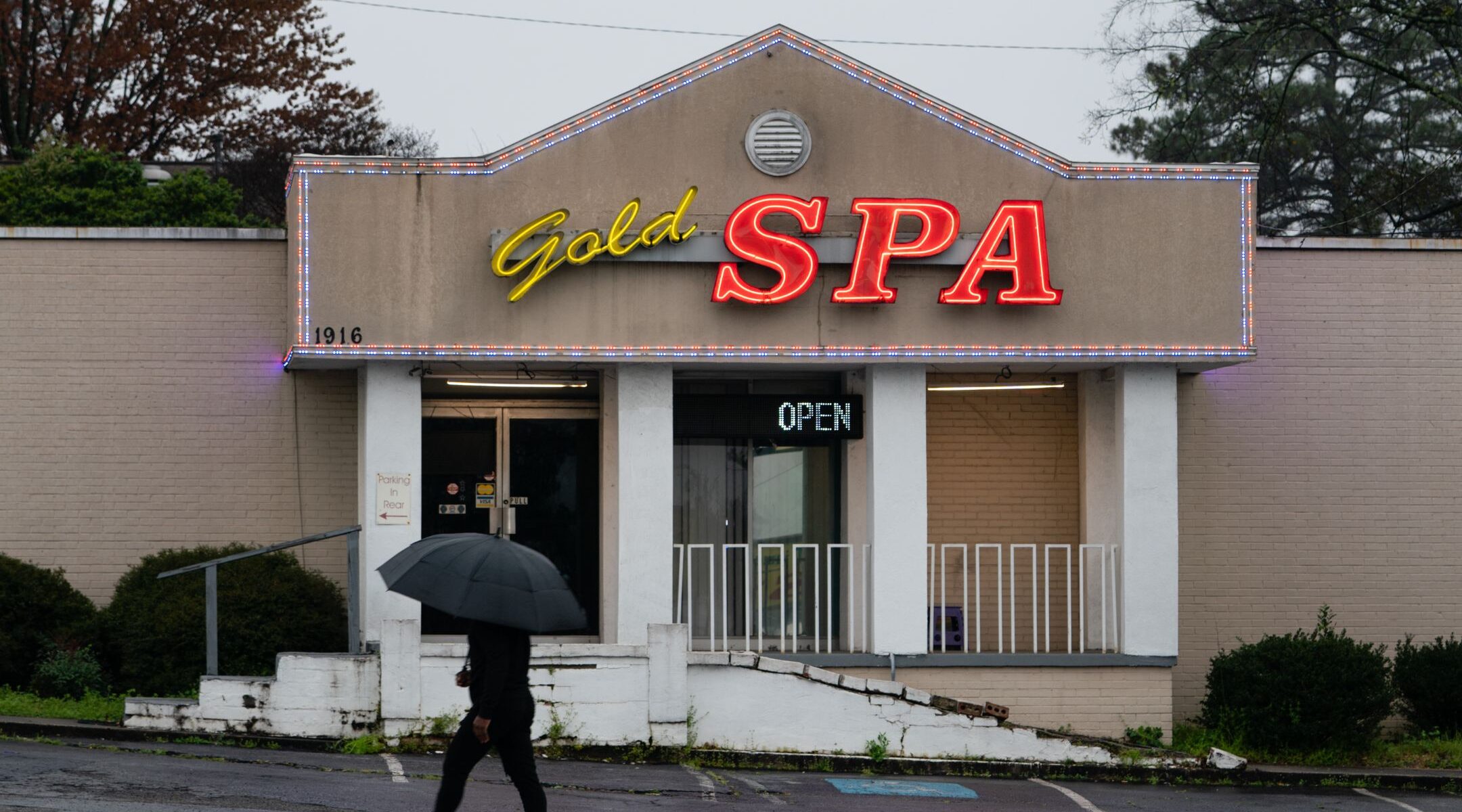 A man walks past a massage parlor where three women were shot and killed in Atlanta, March 17, 2021. (Elijah Nouvelage/Getty Images)
Advertisement

(JTA) — Jewish groups are rallying in support of Asian Americans following a string of murders Tuesday at massage parlors in Atlanta that left eight people dead, including six Asians.

Police in Georgia say the 21-year-old suspect may have been motivated by hatred of women and not anti-Asian bigotry. But in the wake of reports of rising levels of anti-Asian harassment and violence amid the coronavirus pandemic, the attack is likely to exacerbate the community’s fear regardless of the alleged gunman’s motives.

“It’s clearly going to have an effect on the psyche of the Asian-American community,” Dov Wilker, the regional director for the American Jewish Committee in Atlanta, said in an interview. “Anti-Asian hate crimes have been on the rise nationally, and this will put the community on edge.”

Wilker said he was working with other local Jewish groups to put out a solidarity statement. He was also reaching out to Asian-American partners who joined local Jewish groups in pressing for the passage last year of a state law that would enhance penalties for hate crimes, as well as to the Japanese and Korean consulates in the city.

Leslie Anderson, the director of the Atlanta-area Jewish Community Relations Council, said the Jewish community has worked with local Asian-American communities on a range of legislative and social justice issues.

“We don’t know yet if it’s a hate crime,” she said. “Given the rise of violence against the Asian American-Pacific Islander community, it certainly fits in with that pattern.”

“Our hearts go out to them, we are concerned about them and making sure they’re OK,” she said.

“While the motive for last night’s terrible violence remains under investigation, I express my love and support and stand in solidarity with the Asian American community, which has endured a shocking increase in violence and harassment over the last year,” he said in a statement.

The Asian-American community has substantially increased in the Atlanta area in recent years, driven in part by the expansion of manufacturing plants owned by Asian corporations. Asian groceries and restaurants now dot suburbs that once were the domain of white conservatives.

“Deeply disturbed by the horrific attack in Atlanta,” Jonathan Greenblatt, the Anti-Defamation League’s chief executive, said on Twitter. “While there is still much we don’t know, we do know this: alarm bells have been ringing, hate toward the #AAPI community has been rising — and it is our civic and moral duty to speak out to #StopAAPIHate.”

David Harris, CEO of the American Jewish Committee, made a similar pledge.

“In the aftermath of these horrific attacks that appear to have targeted women of Asian descent, we continue to stand with and pray for the Asian-American and Atlanta communities, especially the families of the victims and all those who suffered trauma,” its director, Rabbi Jonah Pesner, said in a statement.

The Orthodox Union decried the attack and called for unity. “Americans of all faiths and ethnicities must join together to do everything we can to put an end to hate and help our neighbors, especially as we work together to defeat the COVID-19 pandemic,” it said in a statement.

In October, the ADL issued a study showing a dramatic increase in anti-Asian sentiment online following President Donald Trump’s tweet that he had tested positive for the coronavirus. Trump had repeatedly referred to COVID-19 as the “China virus” because of its origins in the Wuhan province.

The National Council of Jewish Women said the attack could only be understood in the context of attacks on women and minorities.

“That last night’s horrific attack targeted women of color working low wage jobs is no coincidence and is the direct result of systemic racism and misogyny,” NCJW said in a statement. “Women of color are the most likely to suffer the consequences of racism, misogyny, and white supremacy and women are most at risk to become victims of deadly violence.”

“This is a national crisis fomented by politicians who have chosen to point fingers and spread fear instead of taking action to keep everyone safe from the pandemic,” the group said. “Their words and rhetoric are once again echoing in gunshots, as they have in Pittsburgh, El Paso, and most recently in the halls of the Capitol building, and they must be held accountable. As Jews, we know that freedom and safety for any of us depends on the freedom and safety of all of us.”

HIAS, the leading Jewish immigration advocacy group, drew a line between the attack and bigoted rhetoric.

“While the investigation into these killings has just begun, it seems that misogyny also motivated these murders,” it said in a statement. “As we have seen time and time again, hateful attitudes and speech can lead to horrific violence.”

The Jewish Democratic Council of America, a partisan group, noted the access to guns.

“The nexus between white supremacy, guns and violence against women constitutes a national emergency,” the group said in a statement. “This act of unspeakable hate in Georgia is the latest in the rise of violent attacks and vitriolic rhetoric targeting Asian Americans.”