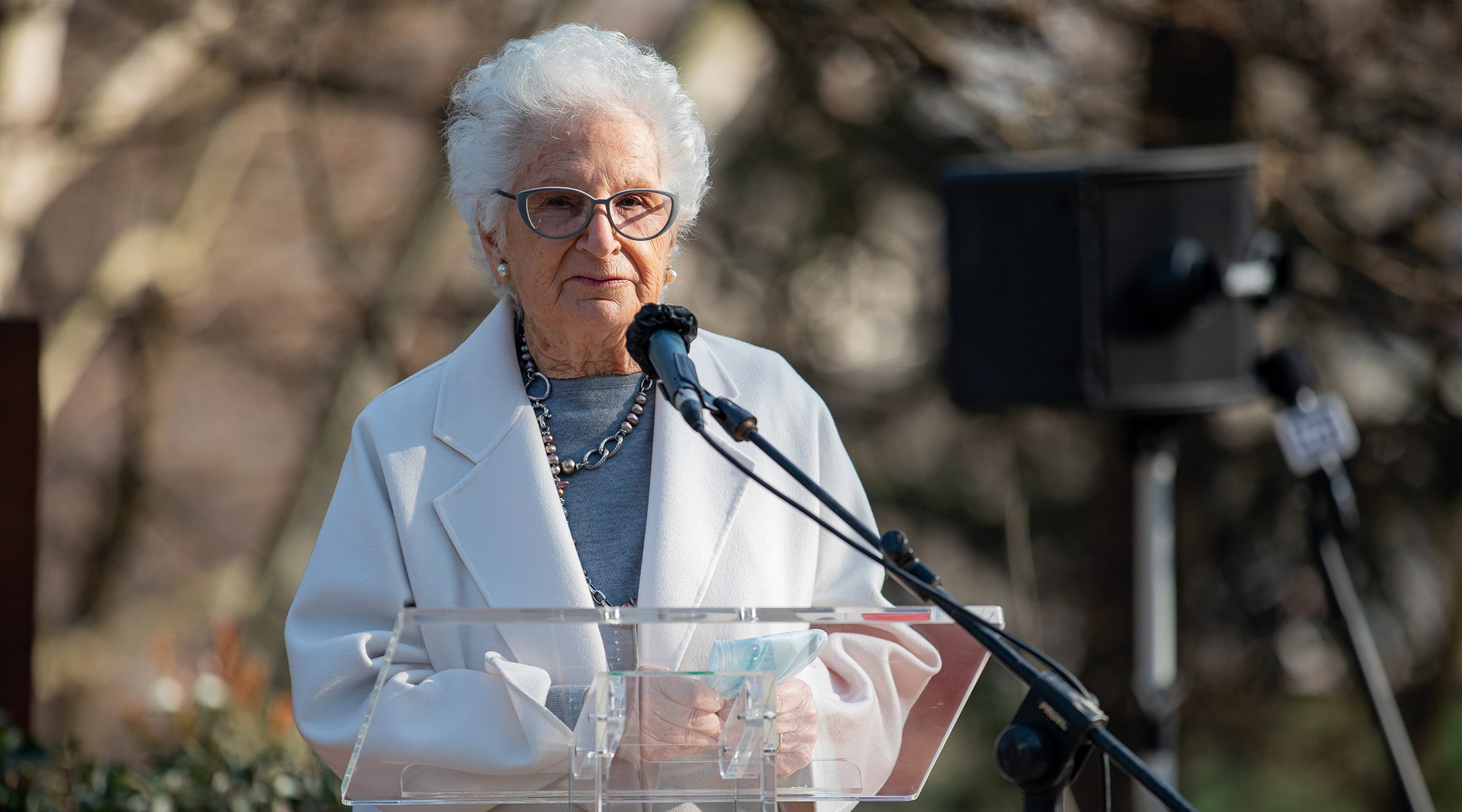 (JTA) — The reassuring speeches, the morale-boosting flyovers and the evening balcony applause for medical staff have done little to impress 90-year-old Liliana Segre.

A prominent lawmaker in her native Italy who barely survived Auschwitz as a teenager, she has maintained a sober attitude throughout the COVID-19 pandemic, which hit Italy early and hard in February 2020.

“In the disease’s early days, there were flags on the windows and singing from the balconies,” she told La Repubblica last month. “I remained pessimistic. I saw that in reality there isn’t much left of that fraternity.”

Segre has been sounding the alarm about divisions within Italian society for years as one of the country’s most vocal Holocaust survivors. Her critical voice and indefatigable efforts to warn her countrymen about the dangers of indifference and hatred have made her a hero to many — and a target for many others.

The subject of multiple death threats, Segre has been under police protection since 2019. In February, a renewed wave of hatred against her surged online after the government in Milan, where she lives alone, posted a video of Segre being vaccinated against COVID-19 and recommending that Italians follow her example.

Segre said she was not deterred by the attacks.

“Those who, like me, have lived through the War are used to the idea of ​​death and loss and the need to resist and be strong and move forward,” she told La Repubblica.

Her insistent and often poetic remonstrance on the rise of far-right ideologies in Italy and Europe have sounded for years.

“Racist violence is now a river without banks, the product of a collective madness wisely fed by the sowers of hatred,” she said in an interview with La Repubblica in 2018 shortly after President Sergio Mattarella named her “senator for life” — a distinction reserved for five notable presidential appointees among the Italian Senate’s 321 lawmakers.

Segre, a longtime activist for Holocaust education, was already 87 then, but she soon became one of the upper house’s most visible and active members.

She effectively created a governmental commission for the fight against racism, a move approved by the Senate in 2019 despite opposition from the then-ruling Lega Nord, a right-wing populist party.

She also picked a public fight with the education minister at the time, urging Marco Bussetti to reconsider his decision to remove history as a subject in the 2019 high school matriculation exam.

“A final exams without history frightens me,” Segre said in an interview in which she described herself as “a voice crying in the desert of the dead.” 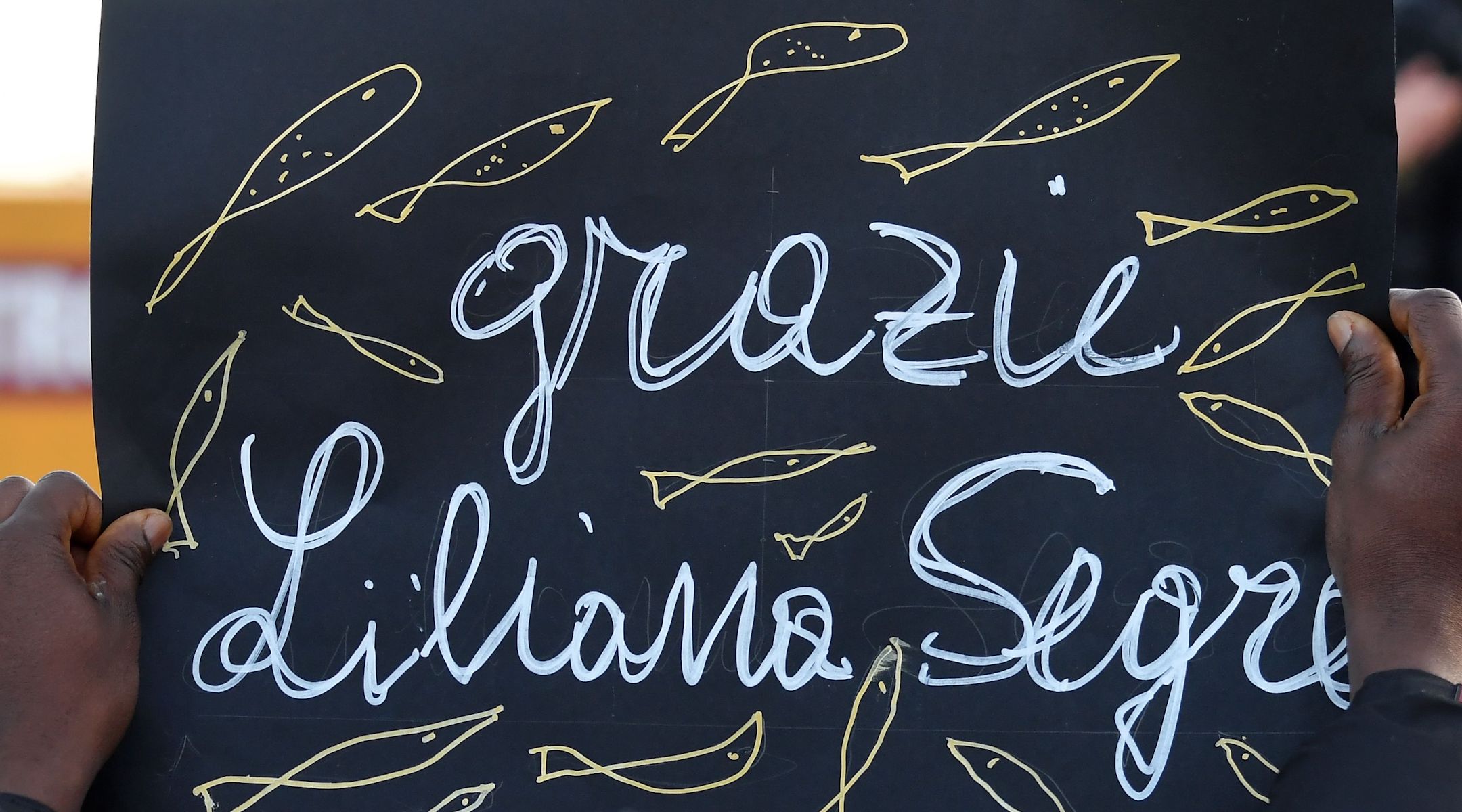 A demonstrator holds a placard reading “Thank you Liliana Segre” during a demonstration in Rome of the “Sardine Movement,” which was formed to oppose the far-right League Party, Dec. 14, 2019. (Andreas Solaro/AFP via Getty Images)

Last month, she endorsed a grassroots effort to bring to parliament a bill on banning “fascist and Nazi propaganda.” As a senator who would be asked to vote on the bill if it materialized, Segre knew that she was breaking the Italian legislative branch’s protocol by endorsing a measure that was not yet submitted. Doing this was “inappropriate,” she wrote on Facebook. But she supports the bill nonetheless.

In January, Segre said she would decline an honor from the city of Verona because it had named a street for Giorgio Almirante, an ally of Benito Mussolini, Italy’s wartime pro-Nazi leader and an inspiration to Adolf Hitler.

These and other actions have invoked death threats and anti-Semitic rhetoric against Segre in Italy, the birthplace of fascism where Lega Nord, which is often described as far right, became part of the government for the first time in 2018.

In December 2019, she received about 200 pieces of hate mail a day, including threats on her life, which prompted police to place her under special protection. The development shocked thousands of Italians, including 1,000 mayors who on Dec. 10, 2019, marched with Segre in her native Milan while wearing Italian flag sashes.

A crowd chanted “Liliana” when Segre met the mayors below the central glass dome of the city’s iconic Galleria Vittorio Emanuele II. Thousands of pedestrians marched along the Galleria and cheered singing the anti-fascist anthem “Bella Ciao.″

Instead of assuring her supporters of their efforts’ success, she told them in a speech to expect the hatred toward her to continue, though it would not deter her. But, she added, “We can leave hatred to the anonymous keyboards. Let us now talk about love.”

This year, too, many Italians have found her approach reassuring. Segre often reminds adoring interlocutors that she’s “just an ordinary person,” and she spoke candidly about being “terribly lazy,” unproductive and unmotivated even to read during the COVID-19 lockdown. Her wry sense of humor, compassionate message and fearlessness have also made her many fans.

Segre has also channeled the country’s deepest fears, ones that are new to many Italians but painfully familiar to her.

“I have to tell the truth, the thing that scares me the most is to die alone,” she told Moked, the Jewish-Italian news service, last year. “I have already seen those who died alone, but I didn’t think I, too, would be on the frontline.”

It took decades before speaking about the Holocaust became possible for Segre, who entered Auschwitz at 13 and nearly died in the death marches on which the Nazis took the survivors when the Russian army neared the camp.

Before 1991, Segre “never mentioned” the Holocaust, nor did people close to her, the eldest of her three children, Alberto, told La Gazzetta del Mezzogiorno last year.

“It was an absolute taboo,” he said. “We knew that something terrible had happened” from Segre’s Auschwitz tattoo, showing that she was prisoner number 75190.

The Holocaust wasn’t even openly discussed between Segre and her late husband, Alfredo Belli Paci, a conscientious objector who was also imprisoned in a concentration camp for refusing to serve in Mussolini’s army. He died in 2008.

His first words to Segre during a chance meeting on a beach: “I know what this is,” referring to her tattoo, she recalled in a 2012 interview for Corierre della Sera. “I felt understood, without having to say anything.”

As she worked through the trauma, Belli Paci was her rock, she told the paper.

“I would have gone crazy if not for him,” she said.

The couple married in 1951 in a Catholic ceremony, though Segre has always identified as Jewish. 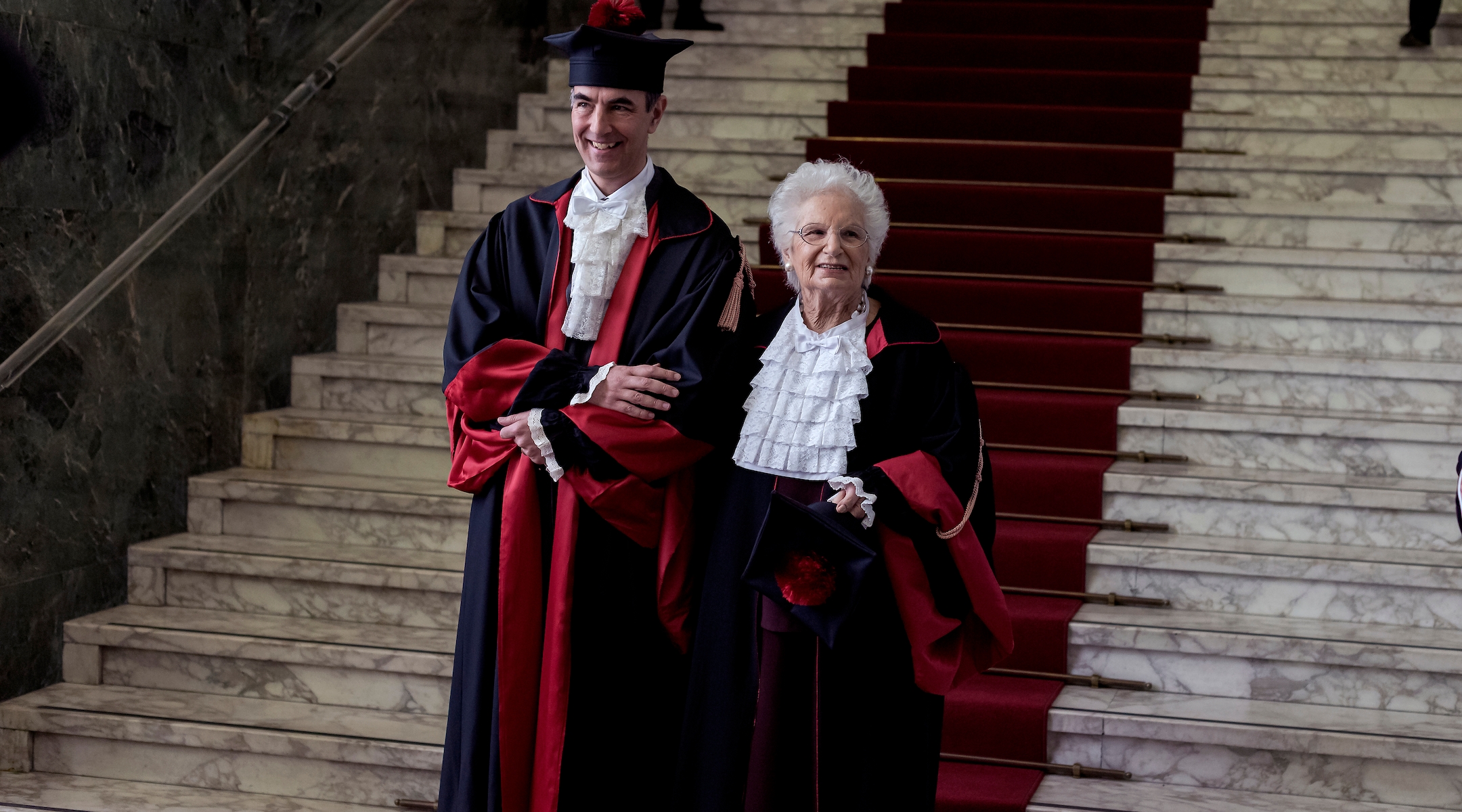 In 1991, she suddenly felt confident enough to start testifying. It became a full-time profession. Segre has visited thousands of schools and spent countless hours recalling every detail of her survival, including how a Swiss border officer handed her and her father back to Italian police after they crossed the border.

“I remember everything perfectly,” she recently said in an interview with the Italian Academy for Advanced Studies at Columbia University. “Exhaustion, pain, loneliness, but above all hunger and cold, cold and hunger. And the presence — I would say the physical presence — of death. That’s it.”

When Segre began sharing her story, the European Union was widely seen as a bulwark against the resurgence of ultranationalism. The emergence of the union’s flaws in doing that has strengthened her resolve to fight political extremism, she said in the Columbia interview.

“What remains of that project? Very little,” she said. “The emperor has no clothes; the democratic antibodies are beginning to show their first wrinkles. Fascism never died, and the failure of the ruling classes is out there for all to see.”

Segre is not optimistic about Italy’s future, where fascism has always persisted, she told La Repubblica in 2018, adding, “Except that after the war we were ashamed to express it.” Time, she said, “has erased the memory of tragedies. And now these racist and xenophobic impulses reappear violently.”

But Segre finds solace in the countless schoolchildren with whom she has shared her story, she said in a 2019 speech in Milan.

“When I found the strength to testify, I looked into the eyes of young listeners,” she said. “I look into them still. And I see in them future candles of memory.”