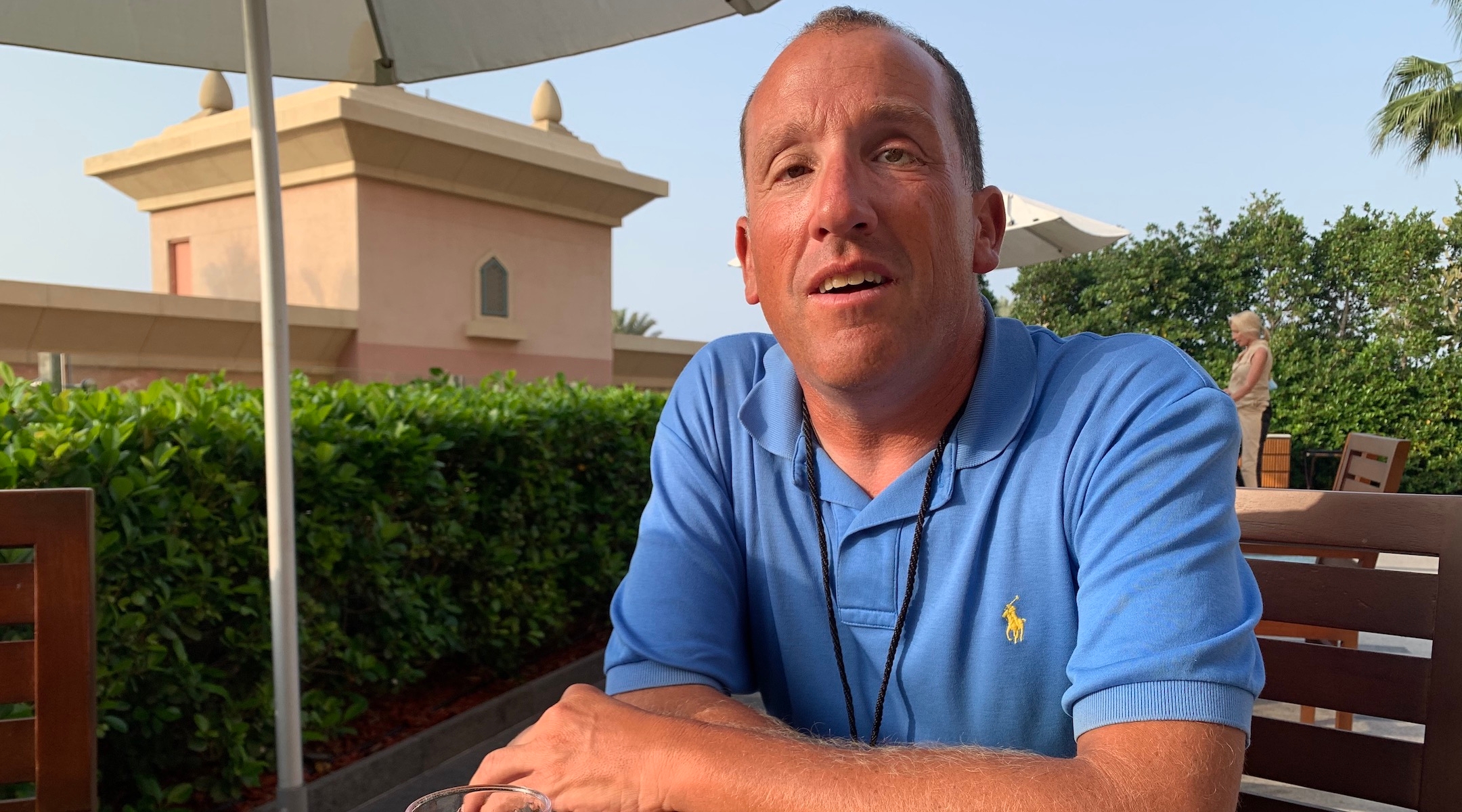 Richard Bernstein, a justice on Michigan's state Supreme Court, lived in Dubai for months after he got stuck there en route to Israel in January. (Asma Ali Zain)
Advertisement

DUBAI, United Arab Emirates (JTA) — On a recent weekday afternoon, if you had walked down the Palm Jumeirah Boardwalk, a promenade overlooking the Arabian Gulf that encircles this capital city’s famous palm-shaped artificial island, you may have encountered a man repeating legal texts line by line to himself for hour after hour.

That man is Richard Bernstein, 46, a judge serving on the Michigan Supreme Court. He had been living in Dubai for more than two months and is now in Israel, where he flew last week. And the texts he was reciting — memorizing in some instances — were court filings from the week’s cases.

Bernstein, who has been visually impaired since birth due to a genetic disorder called retinitis pigmentosa, is blind. So he studies his cases by calling his clerks, having them read the filings to him sentence by sentence, then repeating the documents until he’s familiar enough with them to form an opinion.

His walks, which were often as long as 20 miles, could take six hours, with Bernstein traversing the nearly 7-mile boardwalk multiple times. The court convenes on Wednesdays, when it can hear up to 26 cases in one day.

“If I am reviewing a murder case, it will be a three-week transcript which can’t work in Braille,” Bernstein said in an interview over local delicacies outside the five-star Atlantis Hotel, where he stayed. “I internalize these cases, not word by word, but to know all the key legal issues that are relevant within that case.”

He added, “The Palm’s crescent is like a runway without obstacles, so I have my phone and cane to navigate while focusing on my work assignment at the same time.”

Usually Bernstein, a Democrat who was elected to an eight-year term in 2014, would be doing this work from Lansing, Michigan’s capital. But in January he stayed in Dubai for two weeks on his way to Israel for a visit, to avoid quarantining there once he arrived. During that time Israel closed its borders, and Bernstein was told he could either stay in Dubai or fly home.

He chose to stay in Dubai. With the court meeting virtually due to COVID, he didn’t need to return home, despite the eight-hour time difference. He’s even taken both doses of the COVID vaccine there. He plans to return to Michigan before the court begins meeting in person again.

“I had already started becoming close with so many incredible people here and so I decided to stay back,” he said. “As a blind person it is very challenging to travel and do things on your own. But the beauty of this country is that you are never alone. So many people have helped me around here that I know this area like the back of my hand.”

Walking 20 miles a day is not a challenge for Bernstein, an avid runner who has competed in 22 marathons and the full Ironman triathlon. In 2012, a cyclist crashed into him in New York City’s Central Park, leaving him with a broken hip and pelvis, and landing him in the hospital for 10 weeks.

Bernstein walks now because he says it hurts less to be in motion. He appreciates that the UAE officially refers to people with disabilities as “people of determination,” a term coined in 2016.

“I absolutely love this expression,” he said. “We should no longer use the word disability but people of determination, and I can’t think of any better description.”

Growing up, Bernstein fought for disability rights in school and continued to do so throughout his career. He earned his undergraduate degree from the University of Michigan, a school he later took to court because its football stadium, the largest in the Western Hemisphere, did not have adequate accommodations for people with disabilities. When he applied to law school at Northwestern, he refused to take the LSAT because it asks test-takers to analyze graphs and other visual materials. The school admitted him based on his other qualifications. Bernstein later sued the American Bar Association to end such discrimination on the tests.

He has also taken legal action to force Detroit’s public buses to fix broken wheelchair lifts, and sued Delta Airlines and Detroit’s airport to obtain accommodations for disabled flyers, according to his official biography. He has also worked with the Israel Defense Forces to create more opportunities for soldiers with disabilities, according to the Detroit Jewish News. He is now continuing that work in Israel.

Much of that legal advocacy came at his family’s personal-injury law firm, the Sam Bernstein Law Firm, where Bernstein worked for years after graduating from law school until he won election to the state Supreme Court. Founded in 1968 by his father, Sam, the Sam Bernstein Law Firm is now a household name in the metro Detroit area where it’s headquartered, thanks to its high-profile cases and attention-grabbing ads, including commercials that have featured actor William Shatner and the number 1-800-CALL-SAM. Bernstein’s two siblings, Mark and Beth, also work at the firm.

Bernstein is up for reelection next year and isn’t worried about being away from Michigan for the time being. If he were still in state, as he plans to be in the future, he said, he’d just be doing the same work while sitting in his apartment.

In Dubai, Bernstein was able to advocate for disability rights locally while also doing his work as a Supreme Court judge. He recently met here with children who have special needs and gave a lecture on disability rights at Al Ihsan, an Emirati anti-poverty charity.

“I have worked harder here than anywhere else,” he said. “I have been giving speeches and presentations and, in fact, doing two jobs simultaneously.”

Although he is a democratically elected official who was living in an absolute monarchy, Bernstein said he valued being in Dubai because of the opportunity it gave him to help locals with disabilities. He noted that he’s also advocated for disability rights in China, where he didn’t feel that autocracy should have been a barrier to helping people with disabilities.

“As a guest in this country, I can only create connections and friendship and not focus on other things,” Bernstein said. “I have to focus on specific areas where I can be of help, and that’s what I am trying to achieve.”

Update: This story has been updated to reflect the fact that Bernstein was in Israel at the time of publication, where he is currently staying. He had said his visit to Israel would be temporary and that he intended to return to Dubai but now says he has no specific plan to do so.

It has also been clarified to reflect that his initial stay in Dubai was to avoid a quarantine upon arrival in Israel and that he said he plans to return to Michigan when courts there reopen in person.