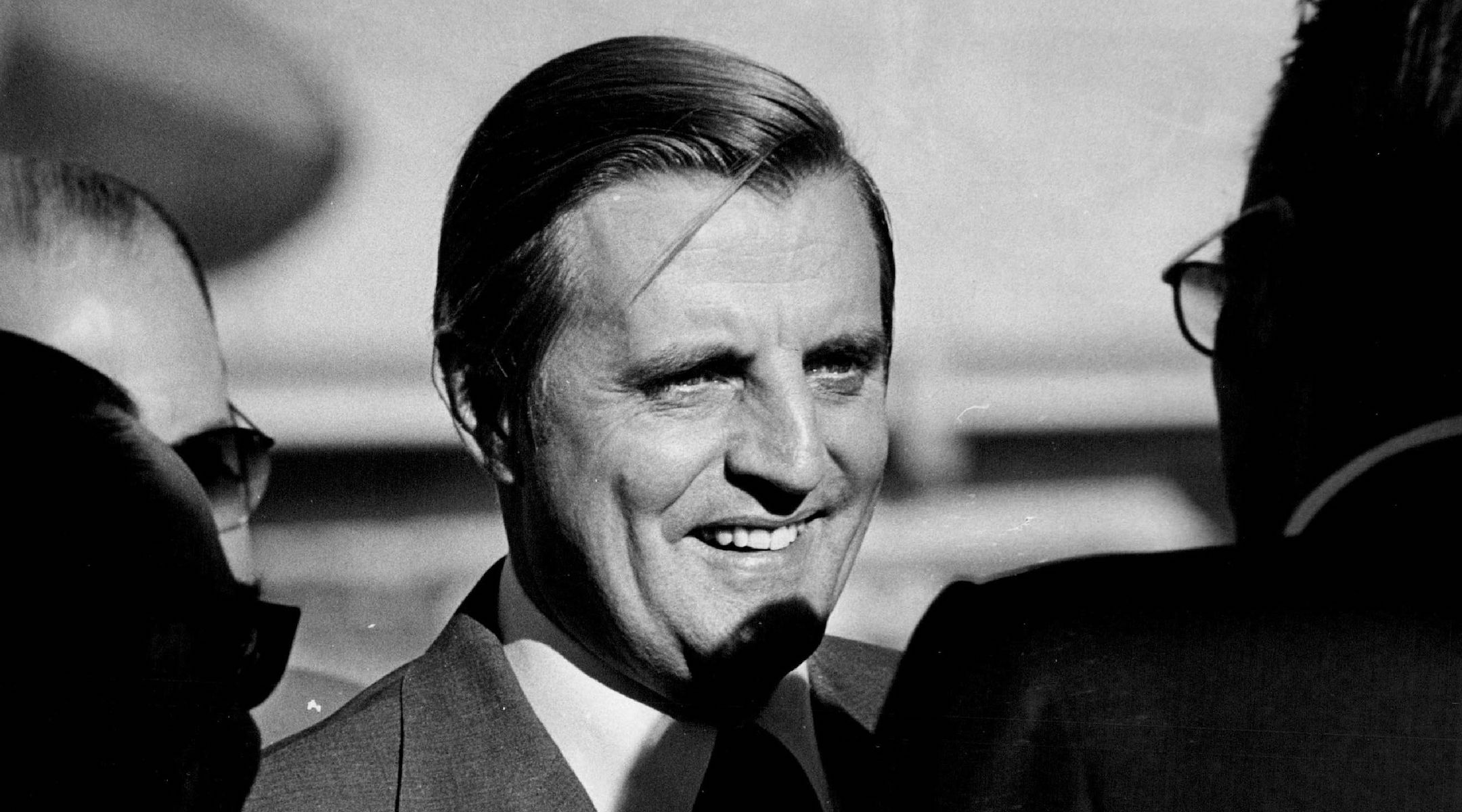 (JTA) — Walter Mondale, the former vice president who represented a time in American history when being pro-Israel and progressive were often synonymous, has died at 93.

He passed away Monday at his home in Minneapolis, multiple sources reported.

From the launch of his national political career, Mondale was close to the national Jewish and pro-Israel communities. He found in those organizations willing partners in his endeavors to expand civil rights, and they found in him an avid advocate of Israel.

Mondale acted as a buffer between President Jimmy Carter, under whom he served as vice president, and Israeli Prime Minister Menachem Begin when the talks that culminated in an Israel-Egypt peace deal turned tense. Begin was said to favor the company of the affable Mondale over Carter, who was standoffish.

Mondale was one of three U.S. lawmakers present at the dedication of Israel’s Knesset building in 1966 — he was a Minnesota senator at the time — and he led a delegation to Israel in 1978 to mark the country’s 30th anniversary.

Israel policy was one of the few areas where Carter and Mondale differed. (The other was Mondale’s impatience with what he believed was Carter’s tendency to scold the American public.) In 2007, appearing with Carter on CNN in an interview marking 30 years since they assumed office, he gently pushed back at his friend’s book published not long before, “Palestine: Peace not Apartheid,” in an exchange that was otherwise all mutual admiration.

“I have read the book,” Mondale said. “I think there’s a lot of good materials in there. I do have a few problems with it, but if I might, I’d like to talk to the president about it first.”

In 1981, already eyeing the 1984 election, Mondale broke with Carter — and with Reagan, the incumbent president — on selling advanced spy aircraft to Saudi Arabia. Both Carter and Reagan favored the deal, and it was a major contention point with AIPAC, the pro-Israel lobby. Mondale went so far as to lobby his former Senate colleagues to oppose the deal.

Mondale’s 1984 campaign to retake the White House from Reagan brought in major Jewish support in the form of both donors and endorsements. Support for Israel and progressive causes did not appear to be in tension in that era, as they can be today. Roger Altman, a fundraiser for Mondale in the race, told The New York Times that his candidate was a natural for New York “because he has supported issues that are important here, domestic issues, urban policy and foreign policy issues, like Israel.”

Mondale made freeing Soviet Jews an issue in his campaign and slammed his rival Jesse Jackson for consorting with Louis Farrakhan, the anti-Semitic leader of the Nation of Islam. He was endorsed by the leaders of the major Jewish religious streams — Orthodox, Reform and Conservative.

Arab Americans said Mondale excluded them from his campaign out of deference to pro-Israel supporters. 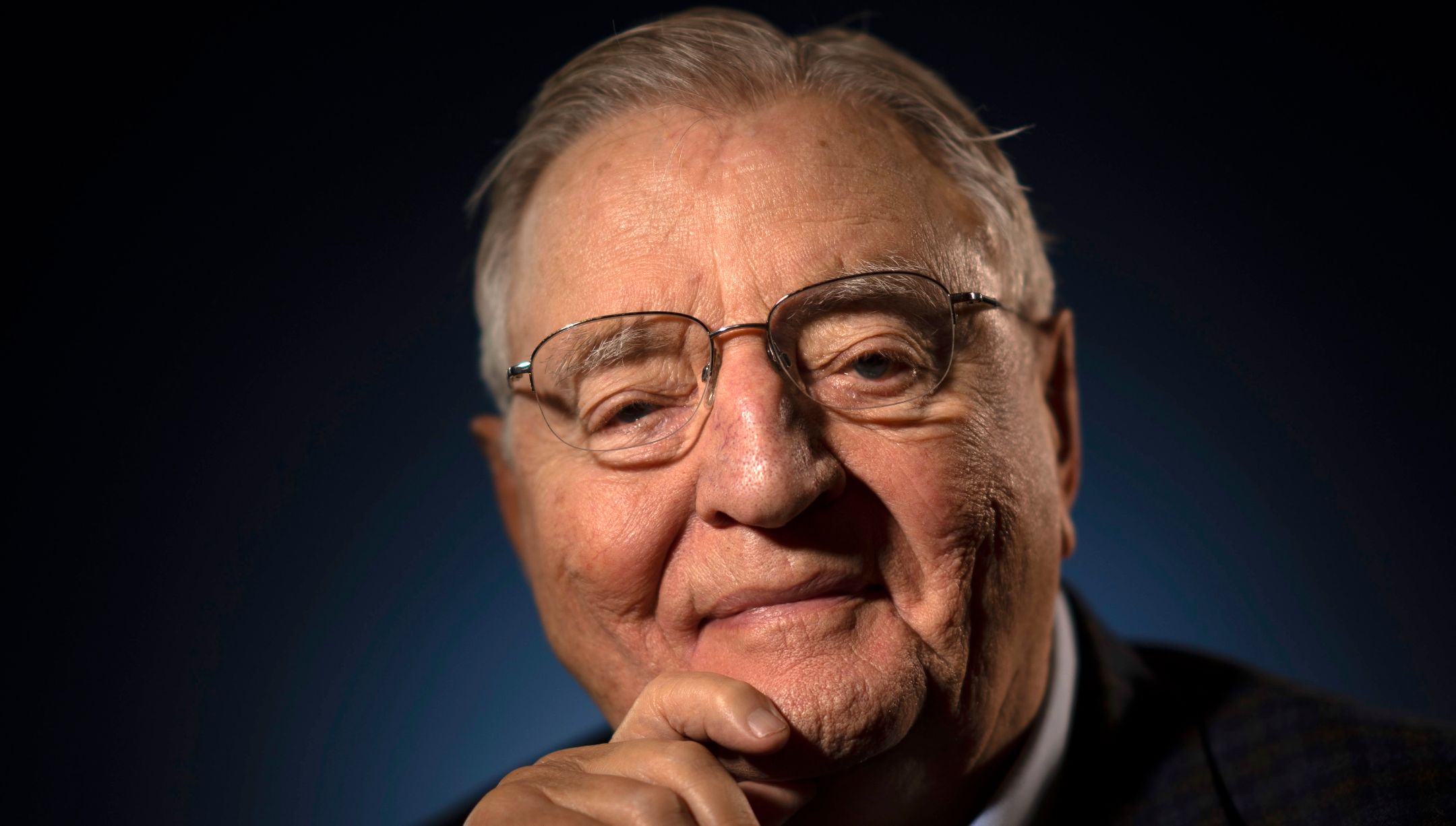 Mondale, who came to Washington in 1964 as Hubert Humphrey’s handpicked replacement as a Minnesota senator when President Lyndon Johnson named Humphrey to be vice president, set multiple precedents in his long career.

When Carter tapped Mondale to be his running mate in 1976, Mondale was the first vice president to negotiate — and secure — an active vice presidential role that placed him next to the president. That set the tone for almost every vice president to follow, and some of his successors, including Al Gore and now-President Joe Biden, said as much on Tuesday in mourning Mondale’s passing.

Mondale set another precedent in 1984 when he named a woman, Rep. Geraldine Ferraro, D-N.Y., as his running mate in the presidential race he lost to Ronald Reagan.

Mondale suffered one of the most decisive defeats in modern times, taking only his home state of Minnesota — by a bare majority — and the District of Columbia in the Electoral College. But he restored the close relationship between the Jewish community and the Democratic Party, earning 70% of the Jewish vote in an election in which almost 60% of the ballots were cast for Reagan. In 1980, Carter had been the first Democrat in two generations to lose the majority of the Jewish vote.

It would not be Mondale’s last electoral defeat. In 2002 he stepped in 11 days before the election to run for Minnesota senator after Paul Wellstone, the well-liked Jewish incumbent, died in a plane crash. He lost narrowly to Norm Coleman, a Jewish Republican.

Mondale never flagged in his good cheer and his self-deprecation — qualities he may have held to a fault, once saying in the 1970s that he did not have the stomach to be president.

Fulfilling his constitutional duty in 1981 to announce the results of the Electoral College, Mondale noted that George H. W. Bush had received 489 votes to be vice president and “Walter F. Mondale of the state of Minnesota has received 49 votes.” He cracked up laughing, and added “A landslide!” and the entire chamber — Republicans and Democrats — rose to applaud him.

The president of J Street, Jeremy Ben-Ami, was hosting the liberal pro-Israel group’s annual conference on Monday night and had just conferred a peacemaker award on Carter when he interrupted his remarks to note that Mondale had died.

“On a night when we honored President Jimmy Carter for his many contributions to peace, we are very sad to learn of the passing of his Vice President, Walter Mondale,” the group said on Twitter.

Mondale is survived by two sons. He was predeceased by his wife, Joan, and by a daughter.

Knowing over the weekend he was going to die soon, Mondale sent a note to the staffers who worked for him over the years. He was typically self-effacing.

“I always knew it would be okay if I arrived some place and was greeted by one of you!” he said.