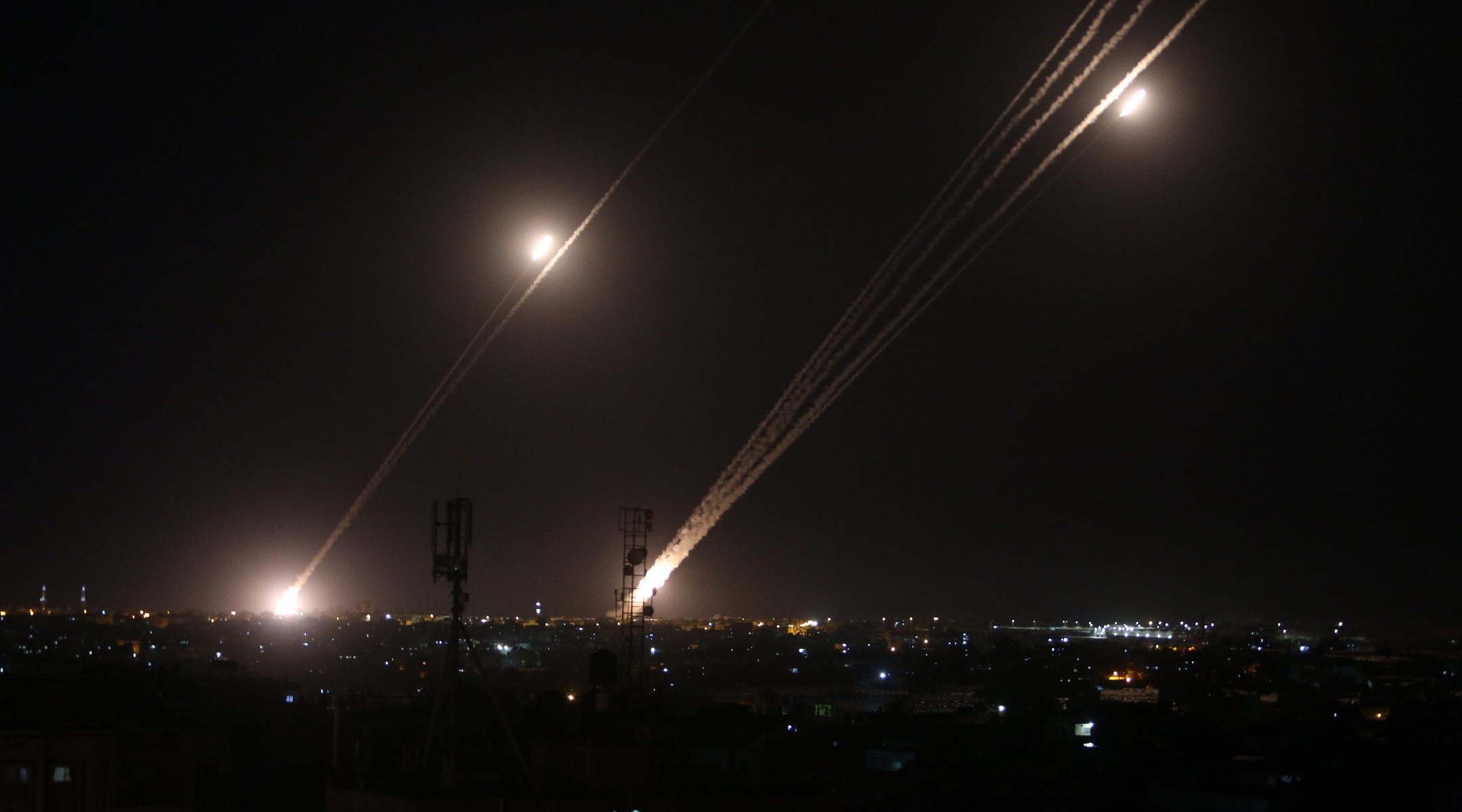 Rockets are launched toward Israel from the Gaza Strip early on May 12, 2021. (Abed Rahim Khatib/Flash90)
Advertisement

JERUSALEM (JTA) – On Sunday evening at sunset, I stood on a balcony in Jerusalem overlooking the Old City walls munching on finger food, mingling with colleagues and physically shaking hands at my first in-person conference since the pandemic began.

Several Knesset members were on hand, and Israeli President Reuven Rivlin dropped by to deliver remarks to the assembly, a conference on Israel-Diaspora relations held by the Israeli newspaper Makor Rishon.

But the real thrill was being at an actual gathering with over 100 people after more than a year of coronavirus restrictions. Thanks largely to Israel’s successful vaccination drive — we all had to show our inoculation certificates at the door — the evening felt like a sign that life was finally back to normal.

Just 48 hours later, I was huddled in a bomb shelter with my wife and children, rockets booming around us amid the wailing of air raid sirens in our midsize city halfway between Jerusalem and Tel Aviv.

Over the past few days, clashes in and around Jerusalem’s Old City have escalated into a full-scale confrontation — not only between Hamas and Israel, but between Arabs and Jews. Beyond Hamas’ rocket attacks on Israeli cities and Israeli airstrikes in Gaza, there have been violent riots in some Israeli cities with sizable Arab populations.

Tensions had been building steadily for days, brought on by the convergence of the last days of Ramadan, the Jerusalem Day celebration of Israel’s conquests in the 1967 Six-Day War, a court case freighted with nationalist conflict involving disputed homes in the eastern Jerusalem neighborhood of Sheikh Jarrah and an apparent pent-up appetite for confrontation.

The scale of violence has taken most Israelis by surprise. Hamas rockets reached Tel Aviv, and rocket fire toward Israel’s main airport, Ben Gurion, prompted its evacuation and the halting of flights on Tuesday night. In the Arab-Jewish city of Lod, Arab-Israeli protesters torched synagogues and assaulted Jews, and Jews shot at Arabs. As of this writing, six Israelis and more than 50 Palestinians have been killed.

After a harrowing night of rocket attacks on Tuesday, Israelis are girding themselves for more. Soldiers are being dispatched to the front. Prime Minister Benjamin Netanyahu has promised greater pressure on Hamas.

The last thing that most Israelis wanted right now was a war with the Palestinians. After a pandemic year that included three extensive national lockdowns and the reordering of daily life to deal with the coronavirus, a modicum of normalcy finally had returned.

The economy was picking up again. Schools, restaurants and offices had fully reopened. The total number of active COVID-19 cases in the country had dropped to under 1,000. Families were planning in-person bar mitzvahs and weddings. I bought tickets to a rock concert for later this month. Among friends, the talk no longer was about virus numbers but about which countries we might be able to visit this summer given Israel’s enviable good health.

But ignoring the Palestinians can have consequences.

While Israelis celebrated their victory over the virus, Palestinians were mostly left to fend for themselves, subject to an agonizingly slow vaccination drive with an insufficient stockpile of doses. The Palestinian national liberation movement had stalled amid persistent Palestinian infighting, the Palestinian Authority’s general ineptness, Israel’s success in keeping the conflict on a very low burn and fading interest in the Palestinian issue among the rest of the Arab world.

Israelis may not have noticed it, but a new generation of young Palestinians was growing increasingly restless.

Meanwhile, inside Israel, Arab citizens of the country were seeing an alarming rise in internecine violent crime in their own cities, and practically begged the Israel Police to take greater action. Their pleas were all but ignored. For most Israeli Jews, the problem was seen as happening over there to those people, not something they needed to worry about.

Now it’s all blown up. The last few days have seen the worst violence between Israelis and Palestinians since 2014, and Israeli Arabs are joining the fray in what may be unprecedented numbers. Many schools that only recently reopened after the pandemic are now closed again — this time due to the rocket fire. One Haaretz columnist warned of a civil war.

“The artillery fire and sirens across Israel don’t scare us like the unrest in mixed cities and Arab towns” inside Israel, wrote the columnist, Rikki Shprinzak. “I’m sure we’ll triumph over Hamas in Gaza, but we don’t have to beat the Arab public in Israel.”

Several converging factors suggest things could get worse before they get better.

Hamas, which rules the Gaza Strip, wants to show it’s still relevant. Arabs in the West Bank and Gaza want to express their anger. Israeli Arabs are fed up with their status as second-class citizens, and they’re redirecting the violence that has plagued their own communities toward their Jewish neighbors.

For Israel’s embattled prime minister, who just failed at the chance to form a coalition government after the nation’s fourth election in just two years, the violence offers a last-ditch chance to demonstrate his security bona fides and, perhaps, scuttle efforts to replace him.

So Israel is stuck. Stuck in a political quagmire. Stuck with the Palestinian problem. Stuck with Israeli Arabs no longer content to have their problems ignored or maligned. Stuck with Hamas in Gaza.

Most Israelis have come to accept that periodic conflict with Gaza is inevitable for now. The army’s crackdowns there sometimes are referred to as “mowing the grass.” But after every confrontation Hamas comes back like a bad weed.

Most Israelis are eager to get this round over with. They want to go to the beach. They want schools to be reopened. Israel only recently signed agreements with the United Arab Emirates, Bahrain, Sudan and Morocco. They don’t want the Palestinians ruining the party.

But wishful thinking and short-term fixes will not make the country’s long-term challenges go away, even after the air raid sirens stop wailing.

For now I wait, dragging my children’s mattresses into our apartment’s concrete-reinforced safe room, tucking them in and hoping for a quiet night.