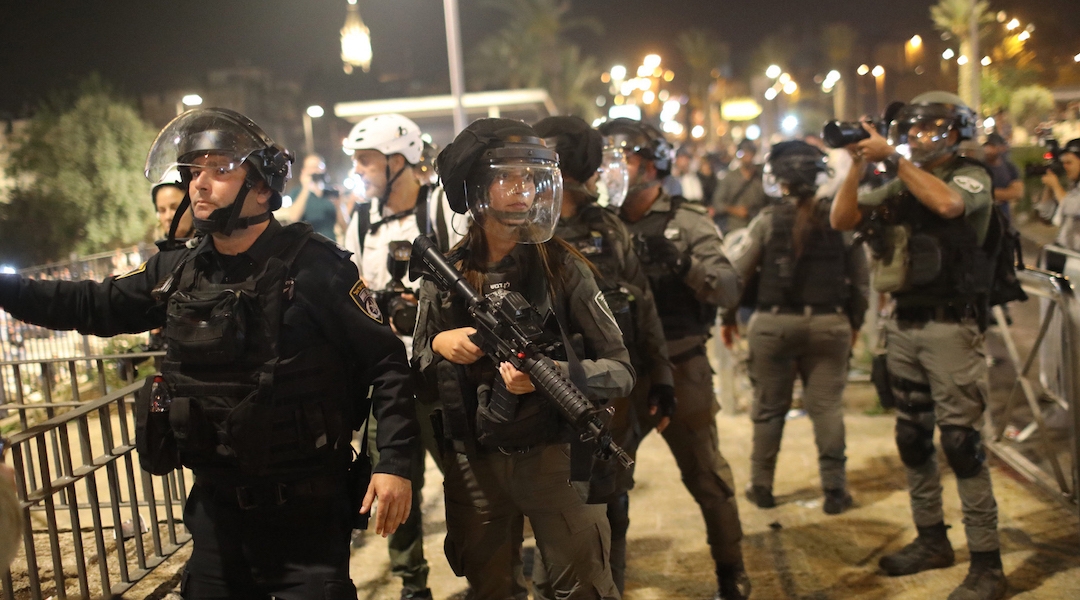 It feels like Israel is in chaos. What is going on? And why is it happening now? Here’s what you need to know.

What is happening in Israel right now? Is this another war?

Not yet — but things aren’t looking good. For weeks, Palestinians in Jerusalem have been fighting with Israeli police and crowds of far-right Jews, all during the Muslim holy month of Ramadan. Over the past few days, those fights escalated, and Israeli police repeatedly stormed the Temple Mount, which Muslims revere as the Noble Sanctuary. Hundreds of Palestinians and dozens of Israeli police officers have been injured.

In one unfortunately illustrative scene circulating on social media, a fire burned in a treetop Monday on the Temple Mount as Orthodox Israeli men danced and sang in apparent celebration at the Western Wall below, chanting “May their name be erased.” The fire on the mount appears to have been started by fireworks shot by Palestinians.

On Monday, the violence got worse when Hamas as well as other Palestinian militants in the Gaza Strip shot more than 150 rockets and other projectiles into Israel. Israel responded by bombing Gaza, and Hamas says 20 people have died. Both sides seem like they’re preparing for the fighting to last for days.

Israel has been fighting wars with Palestinians for years. Is this different?

It might be. Israel sometimes fights wars with Hamas, and there are also recurring waves of unrest around the Temple Mount. But the two don’t usually erupt at the same time. Now they are, and they might be feeding into each other.

Never underestimate how important Jerusalem is for both Israelis and Palestinians. Israeli Jews view it as their undivided capital, full of millennia of Jewish history. The Temple Mount in Jerusalem’s Old City is Judaism’s holiest site. But that same sacred space is also the third holiest site in Islam and is the site of the Al-Aqsa mosque. Jerusalem’s Old City is a central meeting place for Palestinians in eastern Jerusalem, and they view the city’s eastern half as a future capital of a Palestinian state.

As a result, both Palestinians and Israelis believe eastern Jerusalem belongs to them. And the ethno-religious tensions in the city are always at risk of erupting.

So what happened this week that made those tensions erupt?

The long answer: This week marks the end of Ramadan, which sees thousands of Palestinians come to Al-Aqsa and the Old City to pray and gather. Monday is also Jerusalem Day, when Israelis celebrate the Israeli reunification of Jerusalem in 1967. Every year, on Jerusalem Day, a crowd of right-wing Jews marches through the Old City, and has historically chanted racist slogans.

Palestinians have been protesting in the Old City for weeks. First, they opposed barriers that Israeli police erected for crowd control, which prevented Palestinians from gathering at night, when Muslims break their daily Ramadan fast. Then, following a string of Palestinian attacks on Jews a couple weeks ago, far-right Jews marched through the city and fought with Palestinian protesters. Both Palestinians and Jews were injured in the fighting.

Then, last week, the Palestinian protests escalated because of a dispute elsewhere in eastern Jerusalem, in a neighborhood called Sheikh Jarrah, where dozens of Palestinians may be evicted from their homes.

Wait — I’ve seen #SaveSheikhJarrah on Twitter. What’s that about?

Sheikh Jarrah is an eastern Jerusalem neighborhood that some Israeli Jews refer to as Shimon Hatzaddik. During the 1948 war, Jews who had been living in Sheikh Jarrah fled the area and weren’t allowed to return when Jordan took it over. Jordan gave housing in the neighborhood to a small number of Palestinian families who had fled Israel in the war and were not allowed to return. Those families had to begin paying rent to Israelis once Israel took eastern Jerusalem over in 1967.

Over the past decade or so, a group of Israeli Jews have petitioned Israeli courts to let them reclaim ownership and evict the Palestinian tenants. Some of those evictions are being considered in Israeli court now. Dozens of Palestinians would be forced to leave their homes if the evictions go through.

Israel’s Supreme Court had been expected to confirm that ruling on Monday, which was a big reason why tensions in Jerusalem were on the rise. On Sunday, owing to the violence, the ruling was delayed.

For both right-wing Israelis and Palestinians, the Sheikh Jarrah fight symbolizes the larger battle over Jerusalem. The Jews who seek to live there believe they are the rightful owners of the land — and that Israel is the rightful sovereign of eastern Jerusalem. Palestinians see the evictions as Israel trying to ethnically cleanse them from the city where they’ve lived for generations.

And both sides feel that the more Jews live in eastern Jerusalem, the harder it will be to establish a Palestinian capital there. But they disagree over whether that’s a good thing.

So… what’s the hashtag?

The people tweeting #SaveSheikhJarrah are speaking out against the planned evictions. And members of congress — like Alexandria Ocasio-Cortez — who are tweeting about the evictions want to stop them from happening. Other members of Congress who are more pro-Israel have focused on condemning the rocket attacks from Gaza.

Secretary of State Antony Blinken spoke about both issues on Monday — condemning the rocket attacks and the violence in Jerusalem, and praising Israel for postponing the court ruling on Sheikh Jarrah.

What about Israel’s politicians? Didn’t they just have an election?

They sure did — and it isn’t clear who will be in charge of Israel by the end of next week. The election results were inconclusive, and Israeli politicians have spent the last month and a half jockeying for power.

As of now, Benjamin Netanyahu is still prime minister. But he might be ousted by a coalition of opponents that spans the political spectrum —and agrees only that it’s time for him to go. That coalition appears to be close to forming a government, but it isn’t there yet. And debates about the fighting may split the balance they’re trying to achieve — especially because they need the support of an Israeli-Arab party to achieve a majority.

That means that, while all of this violence escalates, Israel is being headed by a transitional caretaker government. For the past several weeks, Netanyahu and his opponents have been focused on sorting out the election, not on keeping the peace in their combustible capital city.

For now, every Israeli leader is saying the same thing: That rocket attacks will not be tolerated and that the military must respond. But no one knows when an official Israeli government will be sworn in — or how effective that fragile government will be in a crisis.

(Palestinians have political drama of their own. A Palestinian national election — the first in well over a decade — was just postponed again. So Hamas may be trying to show its prowess in war rather than at the ballot box.)

But Netanyahu said in a speech Monday night that the fighting may continue for “some time” and that those who attack Israel would “pay a heavy price.” Rocket fire from Gaza has continued into the night in Israel.

In the past, some escalations have died down after a few days. Others have not. In the last major war in Gaza, in 2014, more than 2,200 Palestinians and more than 70 Israelis were killed.

The current conflict is shaping up to be the first major one under a revised world order, where Palestinians are more isolated in the Arab world than ever after a series of nearby countries signed treaties with Israel. Meanwhile, the Joe Biden administration, which could potentially broker peace, isn’t as close with Netanyahu as Donald Trump was, and hasn’t built robust relations with the Palestinian leadership yet.

So if help is going to come from the outside, it’s unclear where it would originate. That means that any path to ease tensions may have to come from inside a region that has already (literally) gone up in flames.

Whether the unrest of the past few days turns into the next round of major conflict remains to be seen.