Jerusalem in tumult, 9 dead in Gaza, as Israel and Hamas exchange fire 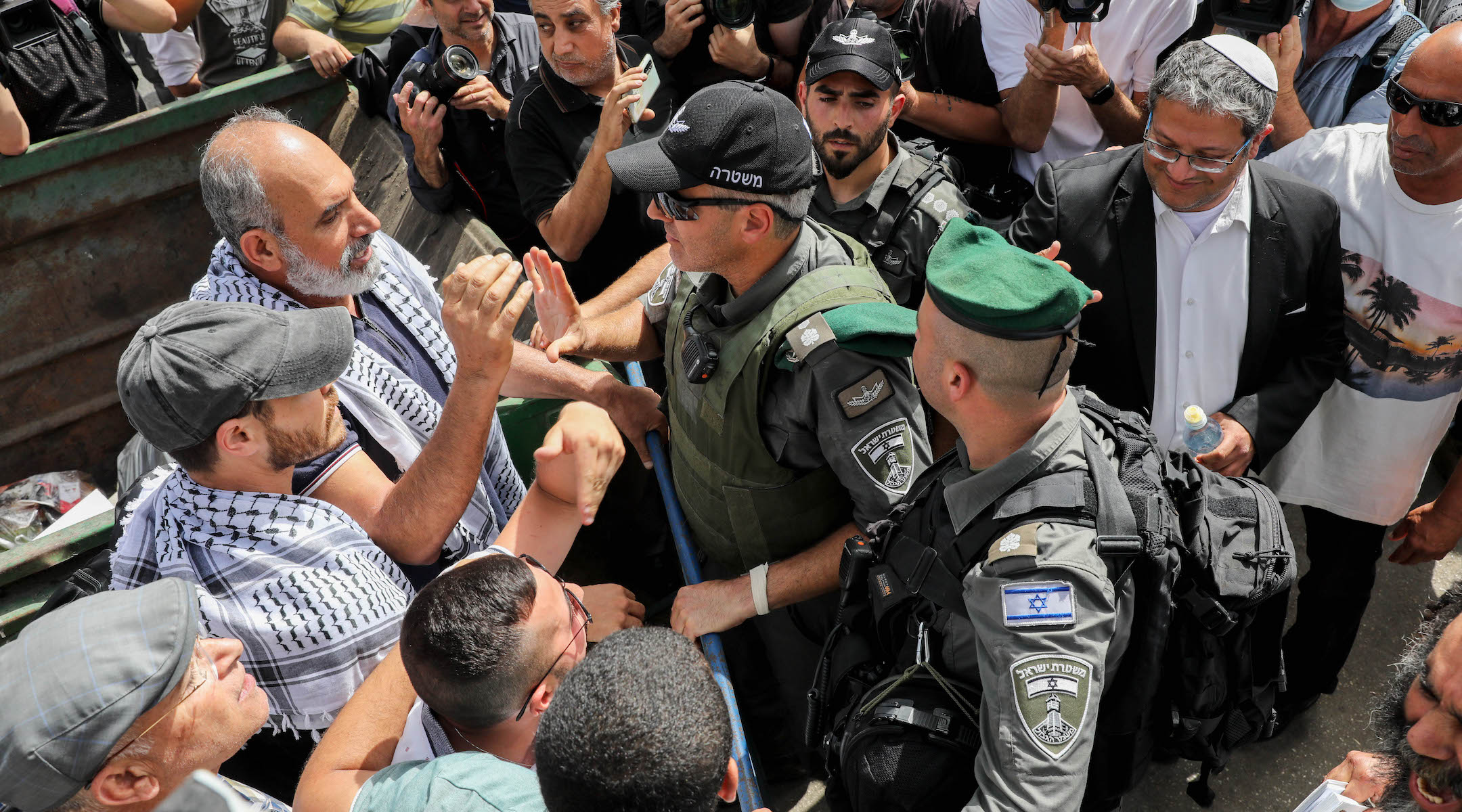 Israeli security forces clash with protesters during a protest against Israel's plan to evict Palestinians from the eastern Jerusalem neighborhood of Sheikh Jarrah on May 10, 2021. Itamar Ben-Gvir, a far-right Israeli lawmaker, is at right wearing a white kippah. (Olivier Fitoussi/Flash90)
Advertisement

(JTA) — Israel’s parliament was evacuated and crowded streets in Jerusalem were sent into tumult as air raid sirens sounded ahead of a rocket barrage from Gaza, an attack that could spark a broader conflict in the city and region.

The rockets, fired by the Palestinian militant group Hamas in the Gaza Strip, came as Jerusalem has been enduring weeks of violence, which have taken place during the Muslim holy month of Ramadan and have centered around the city’s holiest sites for Jews and Muslims.

The violence is now threatening to spiral into a broader conflict, as Israel has bombed Gaza and Israeli Defense Minister Benny Gantz has vowed to respond with an “iron fist.” Hamas reported that nine people were killed in Gaza, including three children.

The rockets came as Israeli police have repeatedly fought with Palestinians on Jerusalem’s Temple Mount, which Muslims revere as the Noble Sanctuary and which is the site of the Al-Aqsa mosque. Hundreds of Palestinians and dozens of Israeli officers have been injured in the fighting there and elsewhere.

The violence threatened to get even worse later on Monday. In the afternoon, hundreds of right-wing Israelis gathered for a nationalist march through the Old City to celebrate Jerusalem Day, which marks the reunification of Jerusalem following Israel’s capturing the eastern half of the city during the 1967 Six Day War.

The march was due to go through the Old City’s Arab Quarter. In the past, it has featured racist chants and led to conflict between marchers and Palestinians. Because of the recent violence, police changed the route of the march to avoid flashpoints for conflict. The march’s organizers briefly canceled it in protest before changing their minds.

The rockets, fired by the Palestinian militant group Hamas, came during the march. Hamas reportedly shot seven rockets at Jerusalem and dozens more at Israeli towns that border the Gaza Strip, which Hamas controls.

No injuries were reported from the rocket fire, but the sirens sent the city into panic. Videos circulating on social media showed parents shielding their children and crowds scrambling at the sound of the alert, which rang throughout the city.

One video, posted by Times of Israel reporter Tal Schneider, showed Israel’s parliament, the Knesset, evacuating at the sound of the siren.

A tree on the Temple Mount caught on fire, and the blaze was visible from the Western Wall Plaza. The fire has been extinguished.

Palestinian protesters have repeatedly clashed with police in and around Jerusalem’s Old City in recent weeks, during the Muslim holy month of Ramadan. At first, the conflicts centered on barriers that Israeli police erected at the Old City’s Damascus Gate, which prevented crowds of Muslims from gathering there. Later, a crowd of right-wing Israelis chanting racist slogans clashed with Palestinian counter protesters.

More recently, tensions have focused on the eastern Jerusalem neighborhood of Sheikh Jarrah, which Israelis sometimes refer to as Shimon Hatzaddik, where hundreds of Palestinians face eviction by court order. Jewish Israelis claim to be the rightful owners of the property based on land claims that predate Israel’s establishment in 1948, when Jews were expelled from eastern Jerusalem.

While Israel has sought to portray the potential evictions as a private real estate dispute, Palestinians see the evictions as ethnic cleansing. Palestinians as well as left-wing Israelis have been protesting such evictions in the neighborhood for years. But this year, the protests have spread to elsewhere in East Jerusalem, as well as to Arab-Israeli neighborhoods and communities throughout the country.

Israel’s Supreme Court was set to rule on the evictions this week but postponed the ruling due to the clashes surrounding the neighborhood.