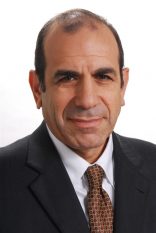 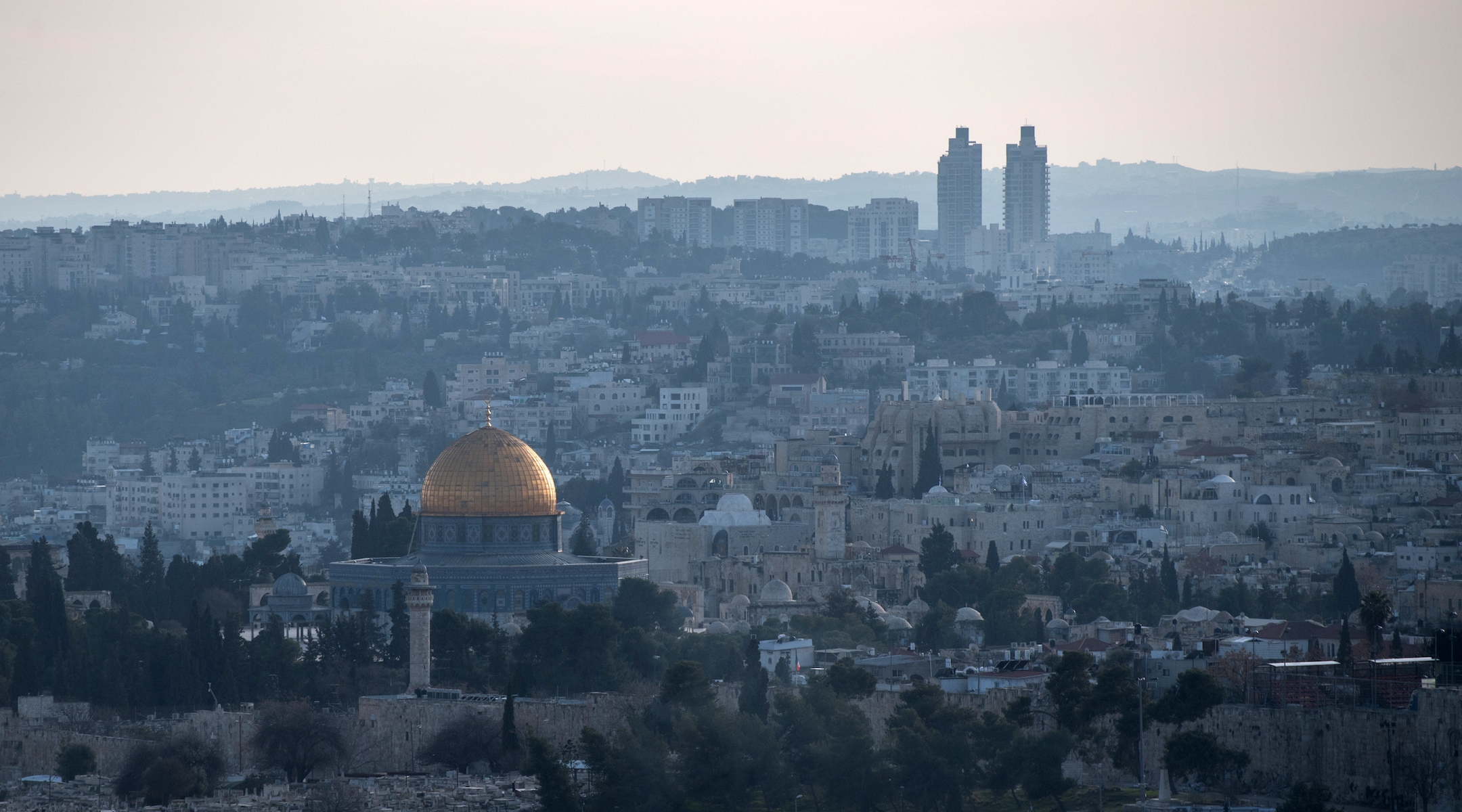 Jerusalem, seen from the east, with the Temple Mount (Haram al-Sharif) in the foreground. (Flickr)
Advertisement

(JTA) — After Hamas launched seven missiles at Jerusalem from Gaza this week, forcing the unprecedented evacuation of the Knesset and the city’s District Court, a new escalation was inevitable. Once again, Israel’s capital is at the center of the Israeli-Palestinian conflict, one intertwining religious tension between Muslims and Jews with political arm wrestling over both the city and the Palestinian territories.

And once again, the future of the city of Jerusalem, in particular the future of eastern Jerusalem and the Old City, lays at the very heart of the charged narratives of both sides to the conflict.

Following the destruction of the Second Temple in 70 C.E. and until the establishment of the State of Israel in 1948, the Jewish people had no land and no sovereignty. From a scattered Diaspora, oppressed and persecuted Jews remembered Yerushalayim, cherished it and prayed facing the Old City from wherever they lived.

Since Israel’s establishment, 3,000-year-old Jerusalem as its eternal capital has been a self-evident fact.

I grew up in a divided Jerusalem. I was 14 in 1967 when Israel, attacked by five Arab states supported by eight others, swiftly conquered the Gaza Strip and the Sinai Peninsula from Egypt, the Golan Heights from Syria — and the West Bank and eastern Jerusalem from Jordan, bringing biblical areas and the Old City’s Temple Mount under Israel’s control.

Israel opened the Old City’s holy sites to all faiths for the first time since the British Mandate ended 19 years earlier, establishing rules for access and worship by Jews and Muslims. Under these rules, known as the Status Quo, Muslims may visit and pray on the Temple Mount, while Jews may visit during limited hours. Jews, however, are prohibited from praying at what our tradition considers the Holy of Hollies.

A decade later, in 1977, I was among the thousands of Jerusalemites lining the streets to enthusiastically greet President Anwar Sadat of Egypt, who courageously accepted an invitation from Israeli Prime Minister Menachem Begin to speak at the Knesset, paving the way for the Israeli-Egyptian peace agreement. Just four years earlier, I was fighting against the Egyptian enemy in the Yom Kippur War.

At the July 2000 Camp David summit in which I participated — one of several attempts to reach an Israeli-Palestinian permanent agreement — President Bill Clinton urged PLO Chairman Yasser Arafat to negotiate Jerusalem directly with Israeli Prime Minister Ehud Barak. Arafat replied: “I will not sign without Al-Quds (Jerusalem).” He blew up the summit because he was unwilling to compromise on Jerusalem, insisting on sovereignty over the entire Old City, except the Jewish Quarter and the Western Wall.

The Israeli peace negotiators at Camp David were actually attempting to ensure the continued survival of a Jewish Jerusalem, a city with a Jewish majority, as has been the case since 1844. One that would be, in Clinton’s words, larger and more vibrant than any in history, alongside Palestinian Al-Quds.

Arafat’s “contribution” to peace at Camp David was his assertion that there was never a Temple in Jerusalem, but in Nablus. Sadly, today, even Palestinian moderates continue to espouse this dogma: “For Islam, there was never a Jewish Temple at Al Quds but a distant mosque,” the late chief negotiator Saeb Erekat once said.

Such “Temple denial” makes future negotiations with the Palestinians even more difficult.

Resolving the future of Jerusalem meant resolving the custodianship and sovereignty of a complex of holy places: the area within the walls of the Old City and the “Holy Basin,” which encompasses most of the sites sacred to the three monotheistic religions, including the Temple Mount (Haram al-Sharif), the Western Wall, the Church of the Holy Sepulcher, Gethsemane, Mount Zion, the City of David, the Mount of Olives and the village of Silwan. Beyond these are other urban areas, to the north, south and east, whose future remained in doubt and in dispute, and which were consequently also on the table at Camp David.

Following the Camp David Summit, when the Palestinians launched the Al Aqsa intifada in late September 2000, Jerusalem again became a pivotal target for their suicide bombings and despicable terror acts. During those bloody years, 2000-2005, we raised four children, aged 8-16, in Jerusalem. It became an ordeal, with their classmates, teachers and friends being killed and wounded by Palestinian terrorists.

Given this history, this week’s rapid deterioration into violence was predictable. Prime Minister Benjamin Netanyahu has a long record of miscalculated decisions over Jerusalem, poking fingers in the Palestinians’ eyes, inflaming the city and withdrawing only once the damage is done. The decisions he has taken recently, as an outgoing premier of an interim government, are no exception. He and his supporters accuse former prime ministers, including Yitzhak Rabin, Shimon Peres, Barak, Ariel Sharon and Ehud Olmert — and any future government exclusive of Likud — for Hamas’ belligerence. These allegations are groundless.

Netanyahu should revisit Olmert’s 2008 proposal to Palestinian Authority President Mahmoud Abbas. It included the two capitals, Al Quds and Yerushalayim; a special regime to be established in the Old City/Holy Basin; and shared oversight of its holy sites by a special multinational committee consisting of representatives from five nations — Saudi Arabia, Jordan, Palestine, the United States and Israel. All of the above would be carried out only in the framework of a comprehensive peace agreement.

Israel also should revive the provision in the Israeli-Jordanian peace treaty, giving Jordan its “special role” in “Muslim holy shrines” and acting with it to “promote interfaith relations.”

Saving the Zionist enterprise while respecting the Palestinian right to self-determination requires a solution in Jerusalem. It demands courage, leadership and national responsibility. President Biden’s administration should be hands-on for both the process and the ultimate vision of a two-state-for-two-people reality, which is indispensable. It is attainable throughout a series of transitional phases, interim agreements and independent steps, all compliant with a continuous negotiation process. It is clearer now that there are no bypasses to the Israeli-Palestinian conflict resolution, contrary to what President Trump and Netanyahu would have liked us to believe with the festivities over the Abraham Accords as stand-alone peace agreements.

Despite many challenges inherent in the Israeli-Palestinian peace process, with Jerusalem at the head of the list, only a two-state reality will work for the benefit of a Jewish and democratic Israel, consistent with the Zionist vision.

Gilead Sher
is Rice University's Baker Institute Fellow in Middle East Peace and Security in Honor of Yitzhak Rabin. He served as Chief of Staff and Policy Coordinator to former Israeli Prime Minister Ehud Barak and as a senior peace negotiator. He is a co-chair of the Israeli NGO Blue White Future and chairs the board of Sapir Academic College, the largest public college in Israel, situated two miles from the Gaza border.
The views and opinions expressed in this article are those of the author and do not necessarily reflect the views of JTA or its parent company, 70 Faces Media.