‘It looks dire but I’m hopeful’: Jewish and Arab coexistence activists respond to the violence in Israel’s streets 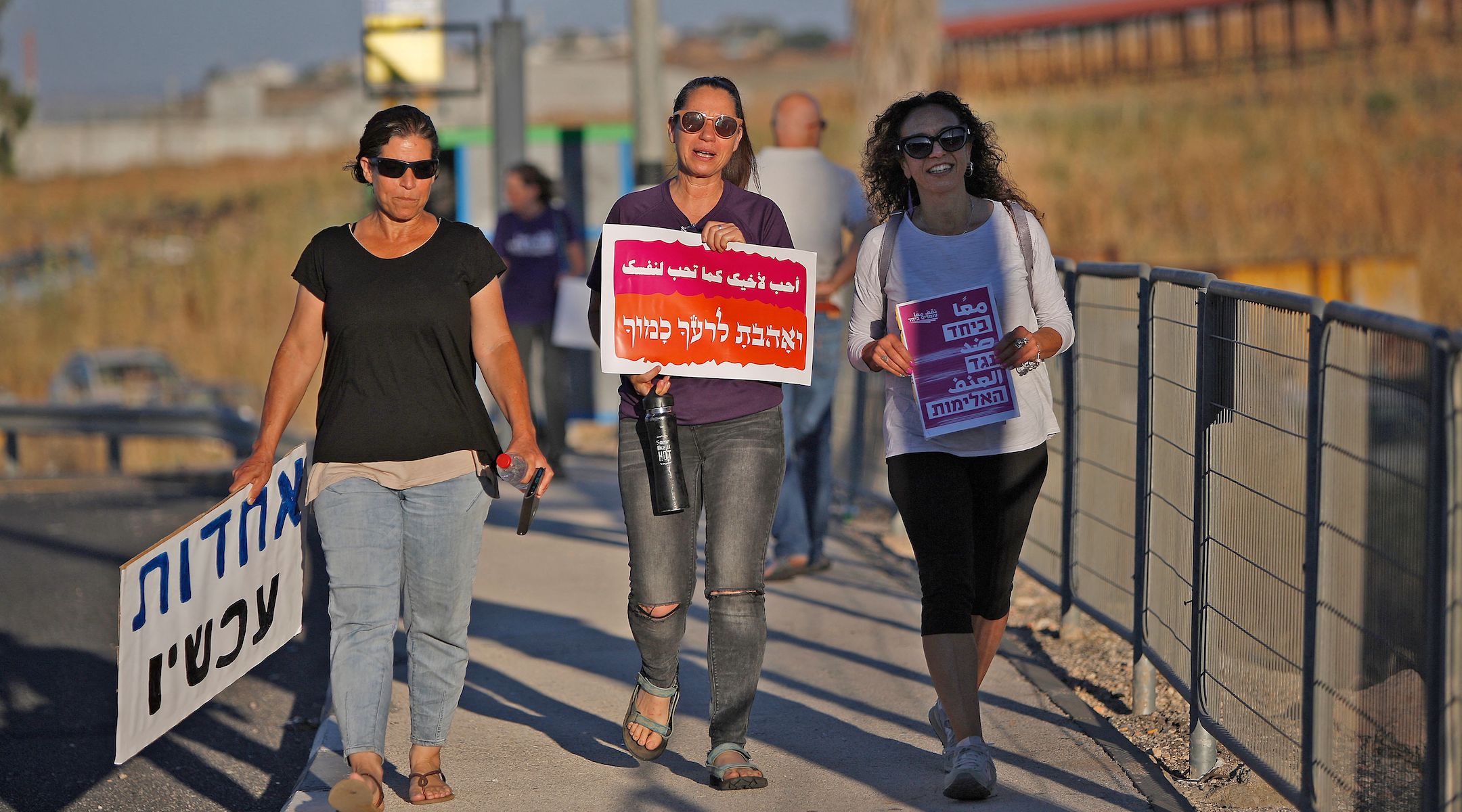 Three women walk in a demonstration for coexistence in northern Israel on May 11, 2021. The sign in the middle says "Love your neighbor as yourself." (Jalaa Marey/AFP)
Advertisement

(JTA) — This has not been an easy week for Lama Abuarqoub, a Palestinian from the West Bank who has worked for years to build understanding between Israelis and Palestinians.

A teacher and mother of five, Abuarqoub speaks regularly with Jews through Encounter, a group that brings Jewish Americans on tours of the West Bank to meet Palestinians. She also been active in efforts to bring Jewish and Palestinian women together to push for peaceful coexistence.

Yet on Wednesday, she was thinking not about peace but about the current conflict, posting on her Facebook page pictures of two Palestinian youths, one from near her village, who she said were killed this week by Israeli soldiers. It was a sign of how quickly her hopes had fallen.

“My first thought was that we’ve been working years and years for building bridges between the two people, for trying to make peace,” she said, referring to her feelings after Monday night, the first night of Hamas rocket attacks and Israeli retaliatory bombings. “And it took us years to take, like, three steps forward, and in one night — 10 steps backward.”

The past few nights have indeed been grim for Abuarqoub and others who work for a shared society in Israel, as weeks of clashes in Jerusalem have given way to a heated, lethal conflict between Israel and Hamas in Gaza that has spilled over into the streets of many Israeli cities.

On Tuesday, Arab protesters in Lod, an Arab-Jewish city in central Israel, burned synagogues, shops and cars. There were raucous Arab protests in other cities as well.

On Wednesday, crowds of Jewish protesters took to the streets chanting “Death to Arabs” and vandalizing Arab-owned stores. Jews and Arabs in different cities were sent to the hospital with injuries, including one Arab man beaten brutally by Jewish rioters on live TV. And on Wednesday night, the Israeli ambulance service Magen David Adom reported that one of its fleet had been attacked in Lod while providing first aid to somebody there.

The unrest continued on Thursday night in Israel as well, as a police officer was shot in the Arab-Jewish city of Ramle.

For those who have worked to build ties between Israel’s Arabs and Jews, the scenes offered a stark contrast to others that grabbed headlines over the last year. During the pandemic, visible cooperation between Arab and Jewish first responders and medical staff helped propel within Israel the notion that shared society could work, according to Mickey Gitzin, the Israel director of the New Israel Fund, a group that helps fund a number of coexistence groups.

“There was a feeling we were going forward,” Gitzin said. Instead of simply advancing broad notions of equality, NIF recently introduced programs advocating for increased Arab leadership in the public sector.

The outbreak of violence this week, he said, exposed the fragility of the shared society enterprise.

“We feel that we’re very successful,” Gitzin said. “And all of a sudden, that happens and it kind of, like, shakes everything.”

And yet Abuarqoub, Gitzin and other coexistence activists say they aren’t giving up. Already, the New Israel Fund has organized two forums to discuss coexistence during the crisis. And despite the carnage, they feel like their work is bearing fruit: The infrastructure they created to advance coexistence in times of crisis is up and running. By mobilizing local networks of allies, activists say, they’ve been able to help shape the national conversation and, hopefully, restore calm.

“The past couple of years, we had a serious shift in the notion of Arab-Jewish partnership within civil society, a shift that is very, very important,” said Sally Abed, a Palestinian Israeli citizen who is a leader of Standing Together, a civil society group. “I don’t think that shift will change — if anything I think it will anchor and it will help us, actually help us, try and impact the conversation that’s happening right now.”

One such think tank, the Abraham Initiatives, was behind a letter this week from local Arab and Jewish politicians urging calm in their cities, including Lod and Haifa. John Lyndon, the executive director of ALLMEP, an umbrella body for some 150 coexistence groups, said statements from senior Israeli lawmakers urging calm were due indirectly to efforts like that letter and another one like it, from a different network of local politicians.

“Many of our members have strong relationships with local mayors in towns and in shared cities,” he said. When Israeli leaders condemned the Arab-Jewish fighting, he said, “A lot of that is from the ground up, from those local leaders saying no, we need you to be out here in front of this.”

On Wednesday, a broad spectrum of Israeli leaders all echoed that call in one way or another, from Israeli Prime Minister Benjamin Netanyahu to Ayman Odeh, the leader of the Joint List, an Arab Israeli party. Similar statements came from centrist leader Yair Lapid and Mansour Abbas, an Islamist politician who has emerged as a political kingmaker in Israel.

“Nothing justifies Arabs lynching Jews, and nothing justifies Jews lynching Arabs,” Netanyahu said Wednesday night. “We won’t take it. That isn’t us — not this violence, not this wildness. We will return governance and order to Israeli cities everywhere. To all the cities. To mixed cities, to Jewish cities, everywhere.”

On Thursday, which is also the Muslim holiday of Eid al-Fitr, Jewish and Arab Israelis began to come together publicly, at the grassroots, to call for coexistence and an end to the violence. Local officials from both communities in Israel’s south met to jointly demand an end to the violence. Around Jerusalem as well as in Israel’s north, areas that have large Arab and Jewish populations, hundreds of people demonstrated for coexistence, handing out flowers to passing drivers and singing “Give Peace a Chance” to the accompaniment of a ukulele.

Activists say they’re in a better place than they were in 2000, when there were similar scenes of unrest across Israel at the start of the Second Intifada. Back then, coexistence projects all but collapsed. Gilad Halpern, a podcaster for the Tel Aviv Review, wrote on Twitter that the landscape had radically changed in the decades since.

“I’m old enough to remember the dreadful feeling of an irreparable rupture between Jews and Arabs in October 2000,” he wrote. “Yet we are at a much better place today, in terms of inter-communal relations, than we were then. It looks dire but I’m hopeful.”

In an interview, Halpern listed one sign he sees of an integrated society more likely to survive this week’s violence: routinely hearing Arabic in Tel Aviv outside the confines of Jaffa, and on the Tel Aviv University campus. “That’s something I never heard as a teenager and a young adult,” he said. “It’s just anecdotal, but I think it means a lot.”

Still, coexistence advocates know they are working amid fraught conditions. Gitzin outlined a number of vulnerabilities, including persistent inequality of opportunity for Arab youth, police actions that discriminate against Arabs, a government funding program launched a few years ago that prioritizes Arab cities, but not Arab populations in shared cities.

Another vulnerability, he said, is a reluctance among Israelis to understand that many Arab citizens identify with the Palestinian populations in the Gaza Strip, and will criticize the Israeli army — which many Jewish Israelis revere — for a bombing campaign that has so far killed dozens of people, including children.

Television panels bringing together Israeli Jews and Arabs this week have erupted into shouting matches, with Jewish Israelis accusing Arab citizens of treason for sympathizing with the victims of the Israeli raids. Abed said she had endured such a panel on Tuesday night, but also saw it as an opportunity to show Jewish Israelis that Palestinians and Arab Israelis identify with each other across borders.

Lama Abuarquob said she feels that, despite the recent violence, Israelis and Palestinians still had only one choice — to keep getting to know each other in the land they share.

“We have to start putting plans and making programs, working on more practical and deeper procedures that would lead to more communication between the two peoples,” she said. “Because if people get together, talk to each other, they will listen to each other.”