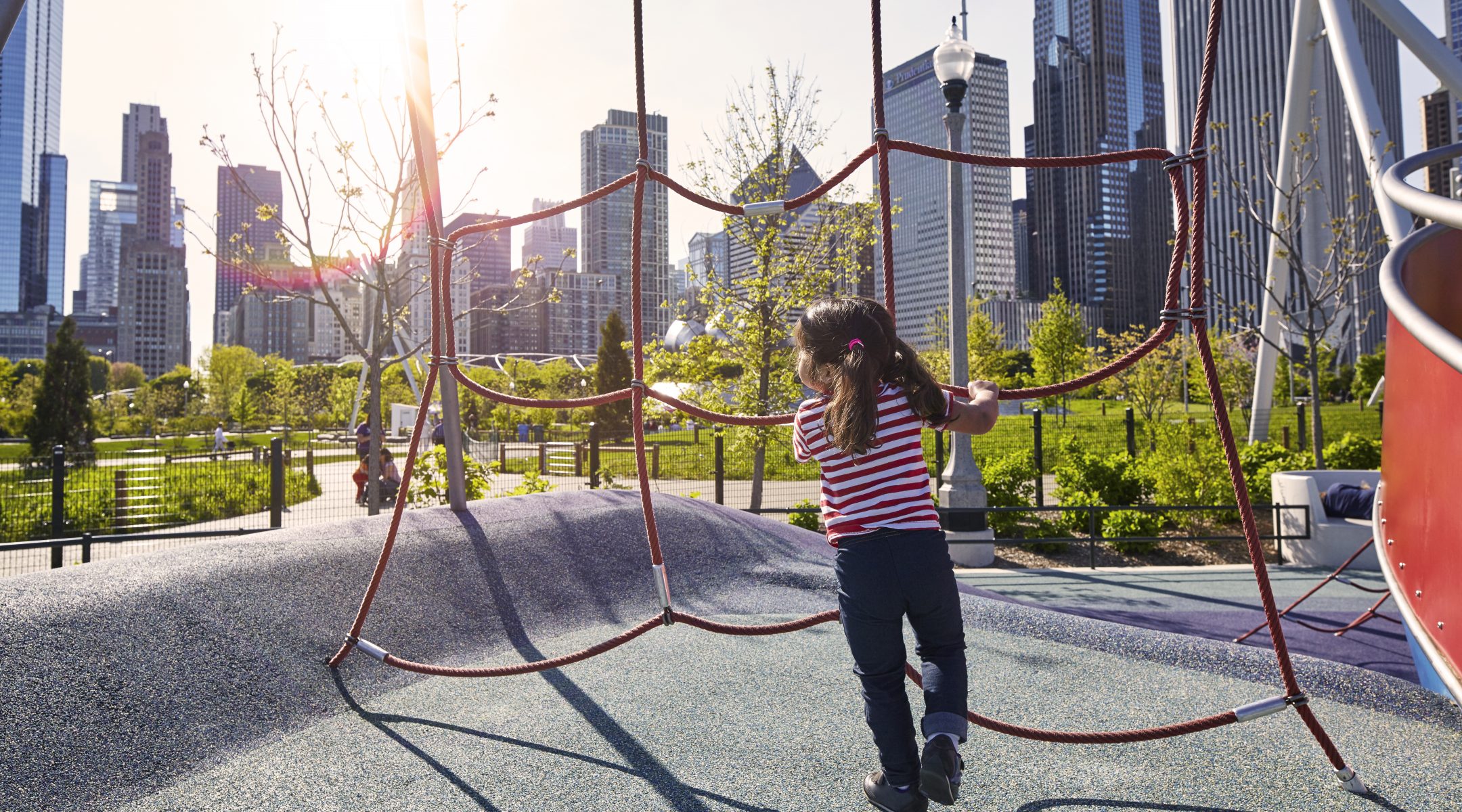 A 42,000-member Facebook group for Chicago mothers, MamaHive, was torn apart over debate about the Israeli-Palestinian conflict in May 2021. Getty)
Advertisement

(JTA) — The tens of thousands of Chicago mothers in a private Facebook group called MamaHive typically post about sleepless babies, strollers and playgroups.

But on Sunday night, with the latest conflict between Israel and Hamas in Gaza entering its second week, a post went up that broke the mold.

“We, the admins of MamaHive Chicago, take a strong stance against the terroristic acts being committed against the Palestinian people,” the post said. “Anyone appearing to justify the occupation, genocide and apartheid that is taking place will be immediately removed. If you feel in any way supportive to those committing these heinous acts, please feel free to remove yourself.”

Within minutes, tensions flared in the comments. In one heated exchange, after a Jewish mother compared the group to Hamas and said she would quit, another mother called her a “genocide lover.” In response, the Jewish mother wrote “go f–k yourself terrorist!” followed by an emoji of an obscene gesture.

Within hours, two of the founding mothers, one Jewish, had been ousted and dozens of other Jewish members were kicked out or quit in protest. And within days, the woman who posted the comment faced professional consequences, while online, the 42,000-member group had effectively imploded, making MamaHive the latest Facebook community to collapse spectacularly over political issues unrelated to its stated purpose.

“This group was about having a safe, supportive, resource-rich forum for parents to talk about their experience of parenting,” Alina Slotnik, one of the group’s founders, told the Jewish Telegraphic Agency. “It was meant to be inclusive and always welcoming, and it breaks my heart that somebody would create a politically or religiously based litmus test for this group.”

Slotnik, who is Jewish, found herself at the center of the conflict in the moms’ group late Sunday night, as tensions around the Middle East conflict ran high in Chicago. Earlier that day, a major pro-Palestinian march drew thousands of protesters downtown, and a smaller group gathered in Skokie, a heavily Jewish suburb. There, two people broke a synagogue window and affixed a Free Palestine sign to its door in an incident that police have labeled a hate crime.

That night, Dana Hamed, a Palestinian mother and makeup artist from suburban Chicago who is one of the moderators of MamaHive, gave a heads-up to the rest of the moderators that she had an idea for a post. She shared a post that she had published on Jan. 7, the day after the Capitol siege, declaring MamaHive to be unwelcoming to supporters of treason, and wrote, “Hey guys, I would like to make a post like this but for the genocide occurring in Palestine right now. Just giving a heads up in case it ruffles some feathers.”

Six fellow administrators, about half the group, soon “liked” her post, and at least one wrote, “I support you,” according to screenshots from the group that JTA obtained from multiple sources. Shortly afterward, the post to the complete group went live.

Hamed was thinking not just about the Jan. 6 insurrection but about another episode when MamaHive had turned uncharacteristically political: during last year’s racial justice protests.

The first responses were ones of relief and solidarity. “Thank you for this!” one woman with a Palestinian flag overlay on her profile picture wrote. “I was completely shocked at the lack of mention about this topic in this group.” In short order, the post had racked up 350 likes.

But Jewish members of the group, sensing that the post contained an implicit invitation for them to leave the group, quickly responded with concern. “This is a diverse group of Chicago mothers,” one wrote. “There are many Jewish mothers, Israelis, and those who support Israel in this group. There are also many who support peace for ALL people. I don’t understand this stance or statement at all.” Multiple mothers endorsed her comments.

From there the conversation intensified. Echoing debates about the conflict that have raged across social media, some mothers pressed the case that Israel is a colonizing nation committing genocide against Palestinians, while others argued that Israel is acting in self-defense when it fires missiles into Gaza. One heated exchange ended with one member writing to a Jewish mother, “Oh shut the heck up with your Hamas excuse bulls–t. Hamas was started looooonnnggggg after Israel started killing Palestinian people. That argument is so old. Find something else.” 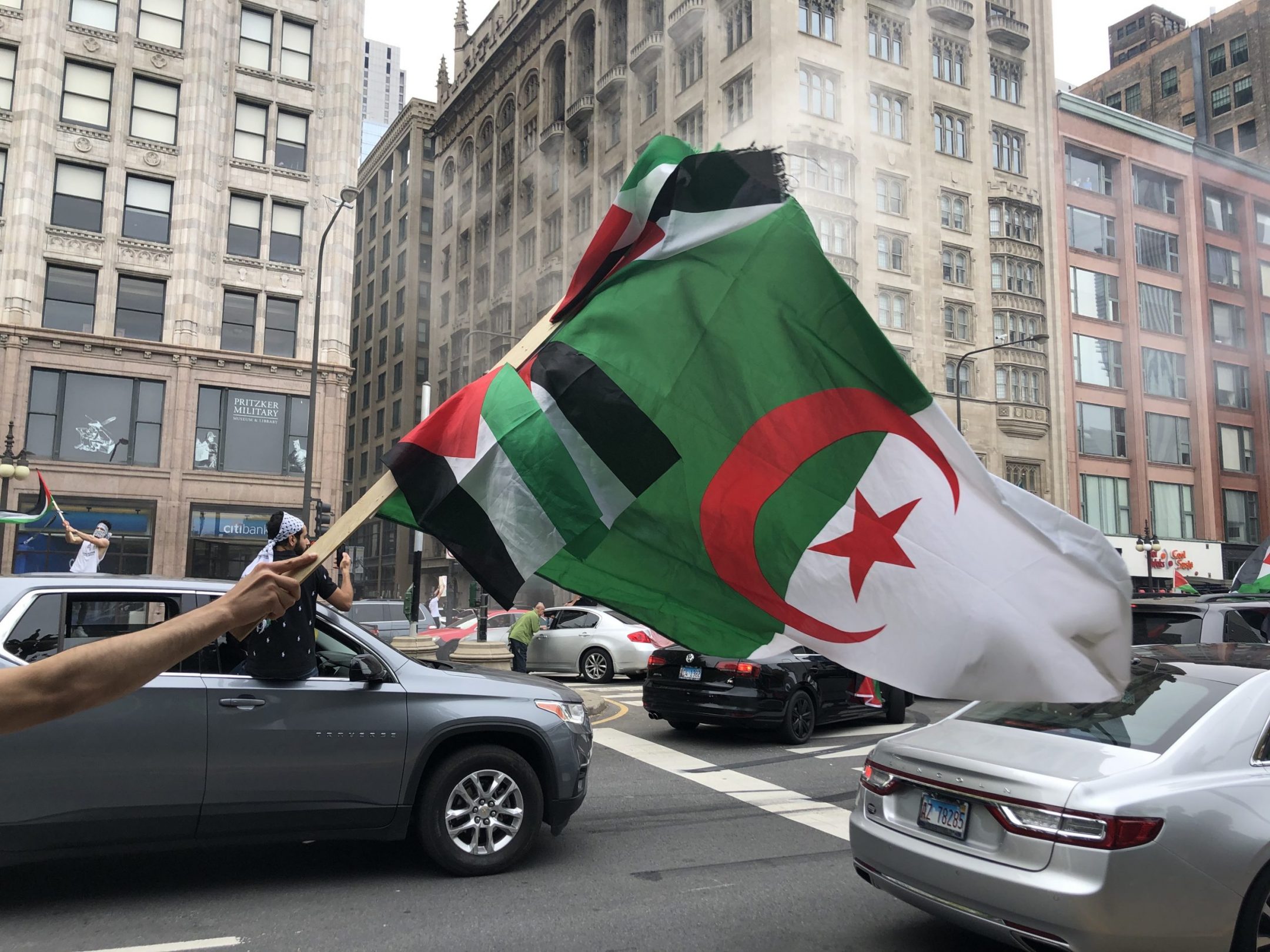 Demonstrators wave Palestinian flags in downtown Chicago after a march, May 16, 2021. (Philissa Cramer)

Slotnik soon weighed in as a founding administrator, saying that Hamed’s post “does not speak for me” and arguing that the topic did not belong in MamaHive. (The group was called MamaTribe originally but changed its name last year in a bid to distance itself from language that could be offensive to Native Americans.)

“There are loads of groups for those discussions. This is NOT IT,” she wrote. “I am also deeply against any political litmus test for participation in this group. We are a welcoming community.”

Slotnik’s post drew more than 100 likes, but in private, administrators were disparaging her interjection.

“Her fellow Jewish friends got on her case about it and she came out to be the savior,” one moderator wrote in a chat only visible to the group’s administrators. (Moderators in Facebook groups have the power to remove and block posts and members, while administrators can also change the group’s rules and remove or add moderators. Both have access to a shared chat for group managers.)

“Trying to silence me. Typical Zionist move,” Hamed wrote in the administrators’ chat. “Exactly why I posted, so people could know the truth.”

The administrators were also busy policing the comments in the group. The chat shows that at least one person posting pro-Palestinian comments was censured for her tone and set to have her future posts require approval before other group members could see them. But more frequently, scrutiny appeared to be aimed at those who challenged the premise of Hamed’s original post.

“I’m removing her and everyone that liked this,” one administrator posted about a comment she had deemed in violation of the group’s rules. But it wasn’t clear to which comment she was referring. Another asked for details: “The murder of Jews comment?” The first administrator clarified, saying she was referring to a comment that said, “Please stop supporting terror.” That post also included the words “Free Gaza from Hamas!! Stand with Israel!” At the time, it had been liked nine times.

The mothers group was not the first to be wracked with tension over the Israeli-Palestinian conflict. In 2017, the Upper East Side Mommas Facebook group, which then had 28,000 members, erupted in fighting after the author of the children’s book “P is for Palestine” posted about her book. (The group imploded last year amid accusations of racism by its moderators.)

Several mothers in MamaHive Chicago reached out to the local office of the Anti-Defamation League, which monitors antisemitism and extremist activity. The group isn’t taking any specific action related to the MamaHive saga but is attuned to the ways in which it represents an emerging frontier for hate online, according to David Goldenberg, the ADL’s Midwest regional director.

“The intensity of hate is increasing at frankly alarming levels,” he said. “And it’s occurring in nontraditional spaces.”

When Hamed did not remove the original post, Slotnik did — or at least tried to. Twice the post returned after briefly disappearing, according to multiple people who were following along. And by the end of the evening, Slotnik had been removed from the group completely. So had Rainbow Partridge, another co-founder, even though she had not posted in the group over the course of the evening. Hamed denied removing either of them — who did so is unclear.

“Sadly, the group has been stolen from us by people who want to misuse a platform we have carefully built and nurtured,” Slotnik and Partridge wrote Wednesday in a public post in a different group for MamaHive community members. They added, “Our hope is that the remaining moderators and admins of the MamaHive group reconsider their actions and agree to honor the rules and mission of the group moving forward.”

Inside the group, the remaining moderators appeared to be doubling down. On Monday night, one posted that Hamed had faced fierce criticism over her post, noting that “her job has been called, her family threatened.” She and 10 others who signed the post emphasized that they stood by it.

“Let us all be clear we stand by Dana and every mom and child who is being impacted by recent events in Palestine,” the post read. “Speaking against any violence and acts of harm against children and oppressed people has been and will continue to be allowed in this group.” 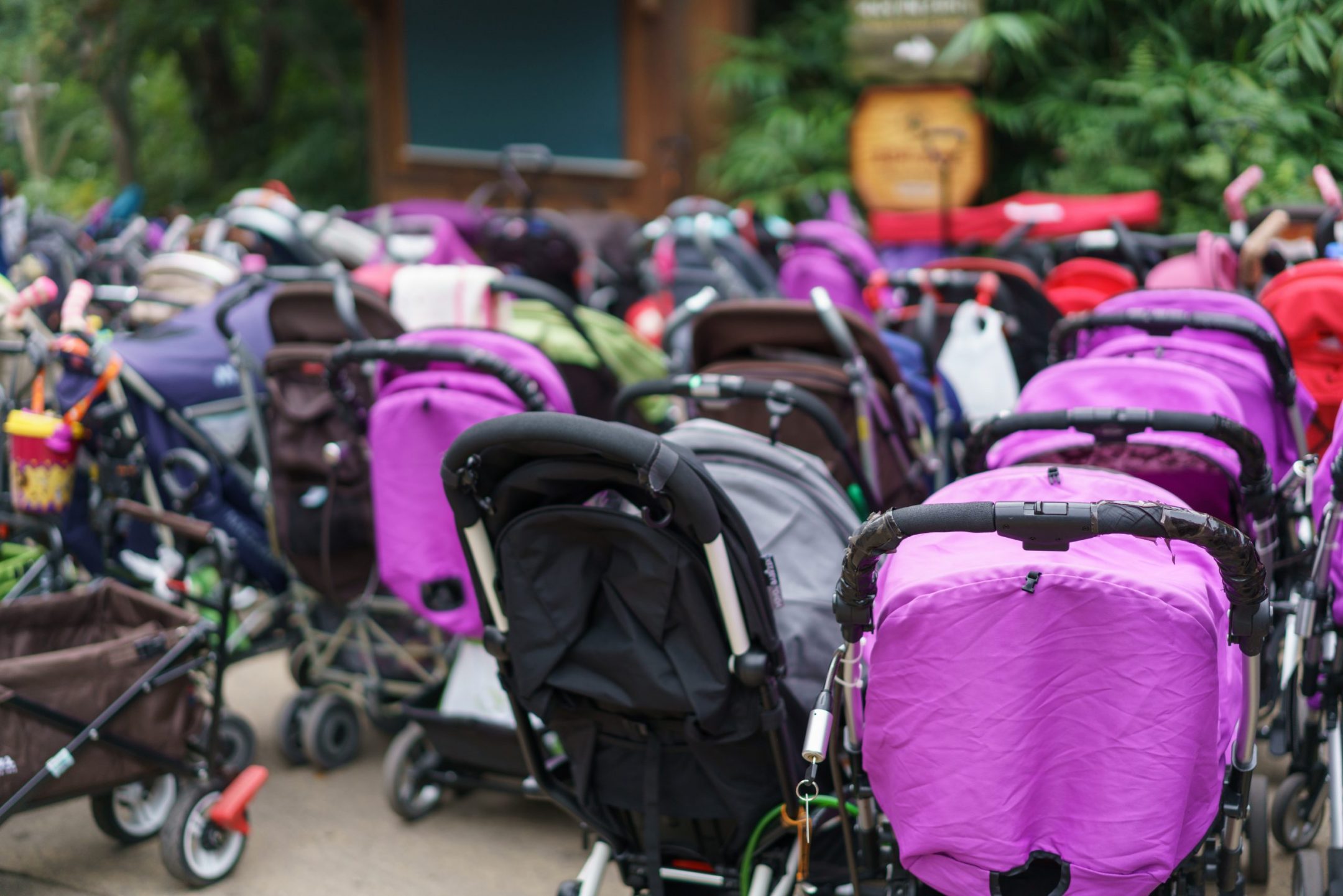 Mothers groups on Facebook typically focus on baby gear and parenting advice. But they sometimes erupt into conflict. (Getty)

The post also included a message in capital letters: “Speaking out against genocide does not equate being against an entire religion or group of people.” Hamed, too, has emphasized in her posts that she believes criticism of Zionism and Israel does not constitute antisemitism. On Wednesday, she posted an Al Jazeera report from a rally held Friday in New York City by Jewish Voice for Peace, an anti-Zionist Jewish advocacy group, following it on Thursday with a quote from Ilana Glazer, the Jewish comedian, saying, “I know as a deeply proud Jew that my criticism of Israel is actually really Jewish because it is with truth-seeking intentions.”

Hamed told JTA by email that she believes “anti-Zionism is not anti-Semitism” and said she had faced fierce blowback over her post. That included losing a freelance makeup styling position with JWC Media, which produces luxury lifestyle magazines focused on Chicago’s upscale suburbs.

She said she would write the same post today, even knowing what would lie ahead.

“I have received death threats, had my personal information shared without my permission online and strangers have called my clients,” Hamed said. “Despite this, I have no regrets about posting a statement, approved by admins, about our collective support of Palestine. As Americans, we must all speak up when we see injustice, inequality and apartheid.”

Goldenberg said Hamed’s experience only heightens his concern about what happened in MamaHive and may be unfolding in other Facebook groups, which are private and operate according to their own rules.

“The idea of death threats or any threats being leveled against anyone on either side is unacceptable and we would support law enforcement being involved,” Goldenberg said. “I’m concerned about continued escalation not only on social media but in real life.”

For now, MamaHive has been “archived,” meaning that it doesn’t appear in Facebook searches, existing members cannot add posts and no new members can join. The ousted administrators and mothers say they are holding out hope that their vision for the group can one day be restored.

“I was shocked, disheartened and angry to see a moderator of this 42,000-person group use her position to advance her political views. As a Jew I felt targeted,” said Rebecca Kristall, a group member since 2015 who said she was removed from the group this week. “The only litmus test for being a part of the group should be that you’re a mom in Chicago.”