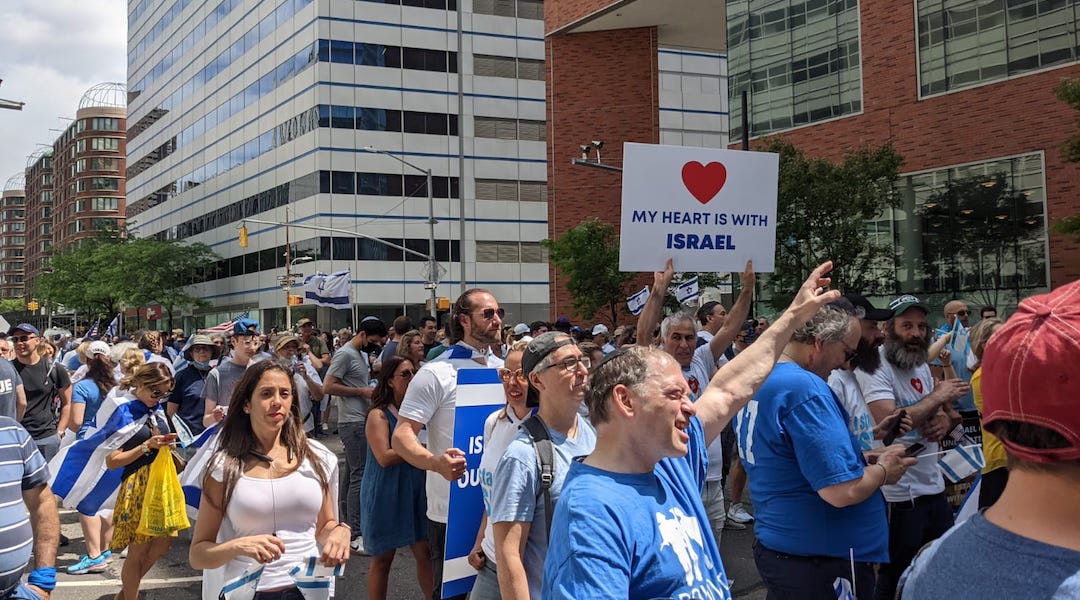 Attendees at the pro-Israel rally in New York City on May 23, 2021. (Ben Sales)
Advertisement

NEW YORK (JTA) — Hundreds of people rallied for Israel in New York City days after a ceasefire between Israel and Hamas in Gaza, and following a string of antisemitic assaults and harassment in the United States.

The demonstration on Sunday in lower Manhattan, organized by the Israeli-American Council and other pro-Israel organizations, principally featured traditional messages of supporting Israel. Speakers asserted that Israel and Jews in New York City faced a common enemy.

“We are here today against terror, united against terrorism,” said Tal Shuster, one of the event’s organizers, in a speech. “We do not accept any type of terror, not in New York, not in Israel, not anywhere in the world.”

The rally, one of 15 similar demonstrations organized nationwide, came after weeks in which Jewish communities across the country experienced antisemitism during and after the conflict in Gaza and Israel. In New York City, amid dueling pro-Israel and pro-Palestinian rallies on Thursday, multiple Jews were assaulted in the street.

In the days following, Jews across New York posted on social media about being threatened, harassed or otherwise attacked for being Jewish. The reports were reminiscent of a string of antisemitic incidents in New York in the months before the pandemic shut down street life globally. Nationwide, the Anti-Defamation League recorded an increase in antisemitic incidents in the first week of the Israel-Hamas fighting.

There were attacks on synagogues and individual Jews in other cities as well.  Synagogues in Florida, Illinois and Arizona were targeted. Earlier in the week, two antisemitic incidents were caught on video in Los Angeles.

The antisemitic incidents have led some to refrain from wearing Jewish symbols publicly out of fear of being attacked. But people at the New York rally said that even though the news of the recent attacks concerned them, they hadn’t gotten to the point of taking off their kippahs or jewelry featuring Stars of David.

“I want to show the world that the Jewish nation is strong and will not give up, and to show that, walking with a kippa, I don’t need to be afraid,” said Gershon Abergel, an Israel who has lived in New York for 18 years and who wears a kippa. “It’s strange but it will pass. I’m trying to be strong.” 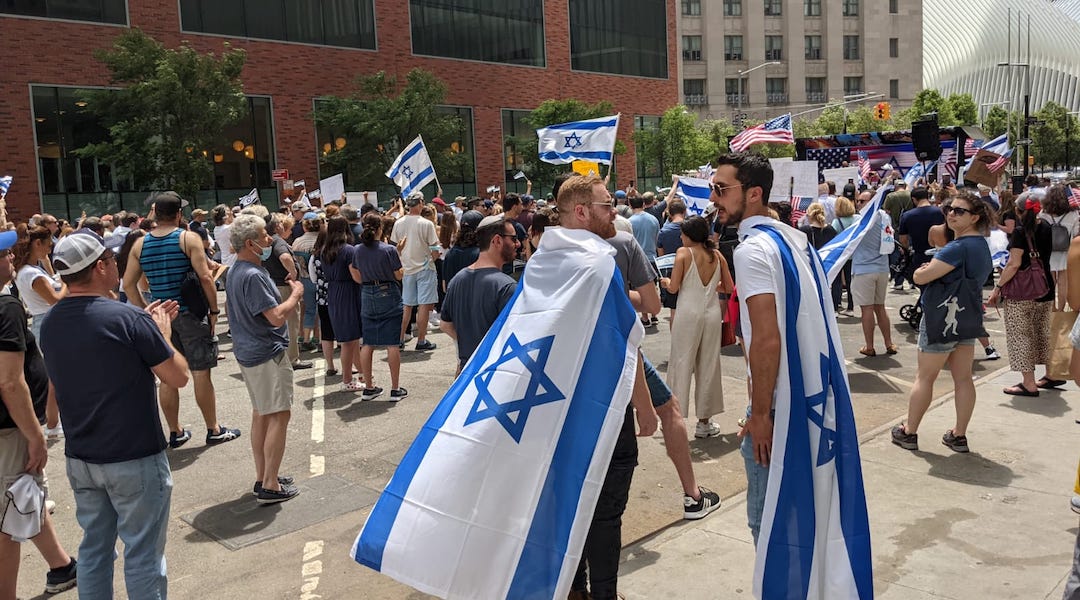 Speakers at the rally, held near the National September 11 Memorial & Museum, condemned the antisemitism amid an event that, mostly, was focused on Israel. Upbeat Israeli music blasted before the event agenda got underway, and demonstrators wore shirts that said “I stand with Israel” and, in Hebrew, “Israel is in my heart.” The backdrop to the dais featured two signs that said “Hamas = Terrorists” and “Stop supporting Hamas.” The crowd cheered for the NYPD near the beginning of the event.

Curtis Sliwa, a Republican candidate for New York City mayor and the founder of the Guardian Angels, a volunteer crime prevention organization, showed up wearing his trademark red beret. On the sides of the crowd, Chabad emissaries wrapped tefillin on men’s arms. Across a barricade far from the crowd, a small group of anti-Zionist haredi Orthodox Jews, from the Neturei Karta movement, protested the rally. But the rally was devoid of the physical fighting that occurred at the rallies on Thursday.

Peter Fox, a writer and pro-Israel activist, condemned Jewish extremists who assaulted Arabs in Israel in recent weeks at a speech at the rally. Elisha Wiesel, the son of Holocaust survivor and Nobel Peace Prize laureate Elie Wiesel, condemned “antisemitic Marxists” before saying that Israel and the Palestinians deserve to live in peace, and leading a chant of “Salaam Aleikum” — peace be with you, in Arabic — to emphasize the quest for peace.

“Jews are the oldest tribe but we cannot allow ourselves to be tribal,” Fox said. “Israelis and Palestinians alike deserve much better.”