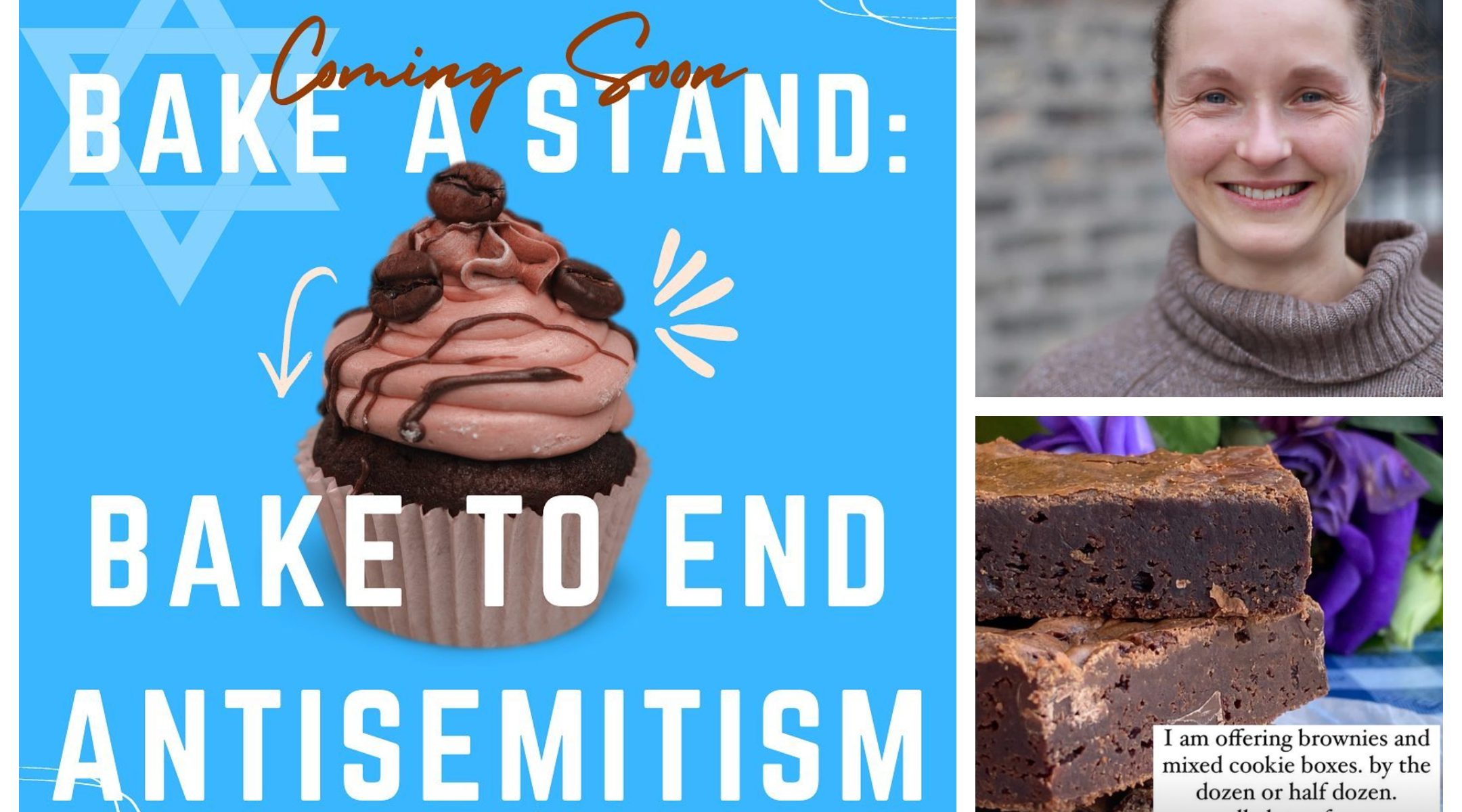 An online bake sale to combat antisemitism has drawn many Jewish participants, but Daniela Weiner, right, is among the few non-Jews to participate. (Sale ad courtesy of Whitney Fisch; other pictures courtesy of Weiner)
Advertisement

Weiner is not Jewish. But she has participated in benefit bake sales before, raising $1,500 last year for racial justice causes, and she also knew that some of her Jewish friends in the food world were alarmed by a recent spate of antisemitic incidents.

“Seeing a friend talk about this, crying on social media that she is afraid … I cannot even imagine,” said Weiner, who is originally from Austria and shares her creations on Instagram. “For me it was an instinct to join.”

Few other non-Jewish foodies made the same decision. It’s a dynamic that organizers of the bake sale say reflects a broader trend of Jews being left to fight antisemitism alone despite a social justice environment that prizes allyship.

Whitney Fisch, a longtime food blogger who is one of the organizers, said she knows of only two non-Jews on the roster of participants for Bake a Stand: Bake to End Antisemitism, which begins Friday. That’s not because they weren’t asked, she said.

“I’ve had people say no, I don’t know if I’m comfortable with this,” Fisch said. “There definitely have been people who claim to be allies for social justice and civil rights just straight up ignore me.”

Fisch and the sale’s other organizers said they are pleased by the turnout among Jewish food personalities, who will sell or auction baked goods and other products to benefit an Ohio Holocaust museum. Participants include Instagram food celebrities such as Jake Cohen, who plans to auction a copy of his “Jew-Ish” cookbook to his 346,000 followers, and Adeena Sussman, who has 130,000 followers for her posts about Israeli food. They also include dozens of people with much more modest followings: One woman in Houston, for example, is selling challahs for $18 and boxes of cookies for $10 to her 500 followers. 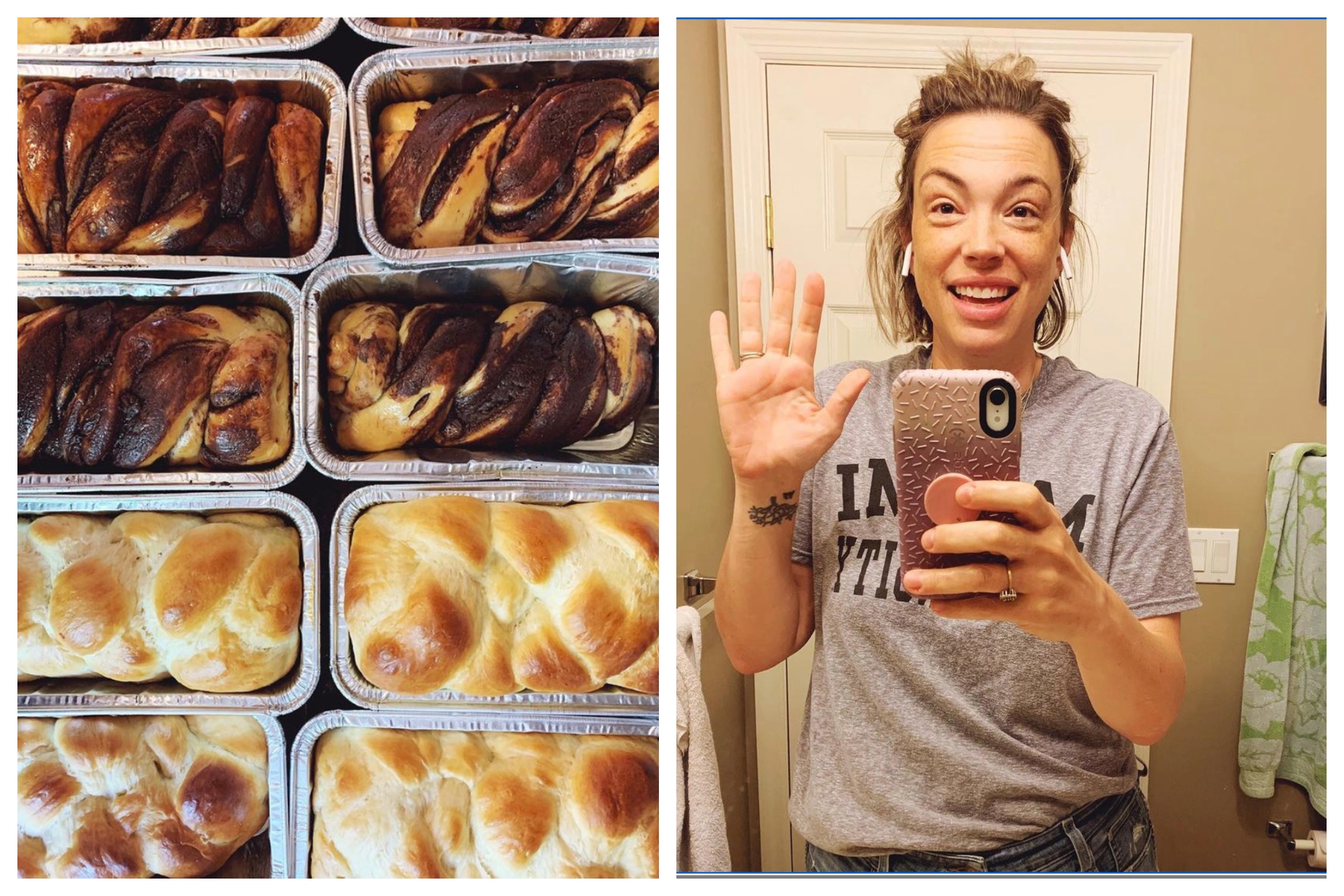 Whitney Fisch is baking 20 babkas for Bake a Stand, a bake sale against antisemitism that she organized. (Courtesy of Fisch)

Fisch, who plans to bake and sell 20 babkas, organized an in-person bake sale three years ago to benefit efforts to reunite families separated at the U.S. border. She said she was inspired to coordinate a virtual edition on top of her day job, running an Ohio Hillel, after seeing misinformation and one-sided narratives circulate during the recent Israel-Gaza conflict — then feeling alone in trying to push back.

“In our opinion, we felt there was such a knee-jerk run to condemn Israel, which allows for antisemitism to grow, and to not support anything related to combating antisemitism,” she said. “People seem scared to say they support a Jewish person’s right to live in this world without fear.”

The bake sale’s “values statement” contains no mention of Israel, and Fisch and her collaborators said they chose to direct proceeds toward the Holocaust and Humanity Center in Cincinnati, where Fisch lives, because the organization focuses exclusively on combating antisemitism and other forms of hate. Other organizations that include Israel advocacy in their work were deemed “too polarizing” for the bake sale, Fisch said.

The museum is preparing educational materials about antisemitism for participants to share on social media during the bake sale, according to its CEO, Sarah Weiss.

“One of my hopes with this is that it draws attention in a different way that other institutions wouldn’t get,” she said, noting that on Instagram, Jewish food personalities may be more likely than Jewish organizations to have non-Jewish followers.

Yet Israel continues to loom large for many of the participants. Weiner said she had received “very disturbing messages” since announcing her participation, including from a friend who told her, “I would not support this. Israel is killing innocent children.” Another sent pictures of children who died in Gaza and said she hoped Weiner would think about them while baking.

Leah Koenig, the author of multiple Jewish cookbooks, said she wanted to participate because she knew that some people in her life, including her in-laws, had grown fearful about wearing kippahs in public over the past several years. But she initially worried that others might equate her participation with support for the Israeli government.

“Are they going to think that I’m too far to the right?” Koenig said she asked herself. “I’ve decided I don’t care. Because at this point standing up as a Jew against antisemitism is important enough.”

Koenig worked with Fisch and Lindsey Silverman, a Los Angeles recipe developer and food photographer, to coordinate the bake sale’s launch. Unlike Koenig, Silverman hasn’t made her Jewish identity a focus of her food career, whose centerpiece is a blog and Instagram feed called Dolly and Oatmeal, where she posts gluten-free and dairy-free recipes from her Los Angeles kitchen.

“My religion or what I believed in has never been part of [my work],” Silverman said. “Now the two have kind of merged and I feel obligated and the need to stand up for my people. There’s no way I couldn’t.”

The initiative echoes last year’s Bakers Against Racism bake sale, which engaged more than 2,000 bakers and raised more than $1.6 million for racial justice initiatives in its first weekend — then evolved into a movement to elevate bakers of color. Many Jewish bakers participated.

Fisch said Bakers Against Racism, which both expressed solidarity with the Palestinians and rejected antisemitism in recent Instagram posts, had not responded to her invitation to share information about Bake a Stand. (The movement’s account did not respond to a message from the Jewish Telegraphic Agency.)

But she said she was excited by those who had, including Weiner, whom she praised Thursday on Instagram as “a queen and truly ally”  after learning that Weiner was Catholic.

Weiner has sold eight boxes of gluten-free brownies and cookies. She wants to raise $500, but she isn’t sure she’ll get there.

And Koenig, who is planning to auction a fruit galette to locals in New York City and her “Little Book of Jewish Sweets” cookbook to people farther afield, said she was proud to participate despite the lackluster turnout by allies.

“If it has to start from people within the Jewish community, it’s still important to do,” Koenig said. “It’s a good first step and we’ll see where it goes.”