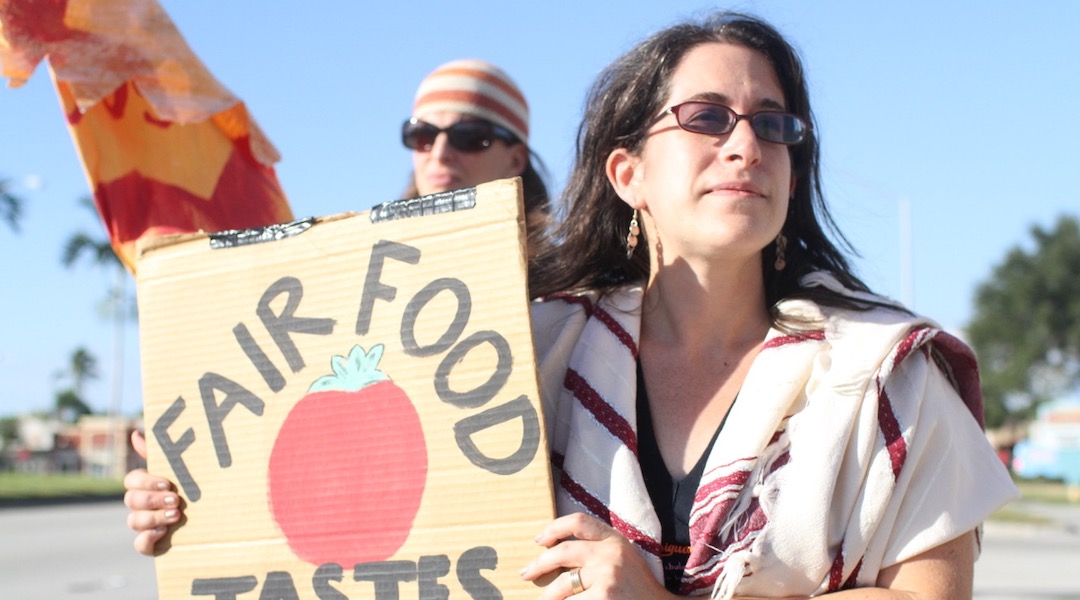 Rabbi Rachel Kahn-Troster spent a decade with the human rights group T’ruah, including years advocating on behalf of farmworkers. Earlier this year, she left to become the executive vice president of the Interfaith Center on Corporate Responsibility. (Courtesy of Kahn-Troster)
Advertisement

(JTA) — When Rabbi Rachel Kahn-Troster began visiting the tomato fields of Florida as an activist more than a decade ago, the stories of farmworkers being treated as slaves were still fresh. The Justice Department had discovered systemic abuse in the industry including cases of pistol whippings, confinement, starvation wages and rampant sexual assault.

But Kahn-Troster, who was working for T’ruah, a human rights group made up of rabbis and cantors, arrived at a hopeful moment. A farmworker organization called the Coalition of Immokalee Workers was putting pressure on the industry to change — and the effort seemed to be succeeding.

Grocers like Whole Foods and fast-food chains such as Taco Bell and McDonald’s were signing on to the Fair Food Program, a binding agreement to source their tomatoes from growers who pay better wages and are subject to a code of conduct. Kahn-Troster and dozens like her in the farmworker movement became known as “tomato rabbis,” who articulated their support through a Jewish lens and enlisted Jewish communities across the country in solidarity campaigns.

“I got to see the change in the fields in real time and it made a difference for the lives of tens of thousands of farmworkers,” Kahn-Troster said.

The fight isn’t over. The farmworkers are now pressing one of the last major fast-food chains that refuses to join the program: Wendy’s.

Kahn-Troster is part of the campaign targeting Wendy’s, but no longer as a representative of T’ruah. A few months ago she became the executive vice president of the Interfaith Center on Corporate Responsibility, or ICCR.

In the new role, she is helping lead a coalition of 300 institutions, many of them religious, that control $4 trillion in financial assets. As major shareholders on Wall Street, they push corporate America to act more ethically and responsibly. In the business world, the shorthand for doing the right thing is ESG, or environmental, social and corporate governance.

The Jewish Telegraphic Agency caught up with Kahn-Troster as she began her new job and just after as the ICCR put out a letter signed by 100 investors urging Wendy’s to join its peers and implement protections against abuses in its supply chain.

This kind of work — trying to change the practices of existing companies — is known as shareholder advocacy. It should not be confused with impact investing, which means pouring money into companies that happen to be aligned with your values.

Kahn-Troster talked about the differences between charity, grassroots activism and tackling injustice by speaking up at the corporate boardroom. And she shared some of her big and broad goals, like changing traditional ideas about how Jewish money can bring about positive change.

JTA: I noticed that there are many Christian entities and very few Jewish ones among the signatories of the Wendy’s letter. I also counted only a handful of Jewish groups (such as T’ruah, Reform Pension Board, Jewish Federations of North America) on the list of ICCR members. Why is that?

Kahn-Troster: Probably because there aren’t so many Jewish ESG groups — they weren’t part of the natural networks that this letter went to. And a lot of Jewish social justice groups aren’t plugged into corporate accountability campaigns.

One of my goals at ICCR is to bring more Jewish groups into this work. I think this is a good moment for it and groups with assets (like family foundations) might be asking new questions both about how to invest in ways that further their mission and how to leverage their assets to support their grantees and the systems change they are trying to achieve.

Wait, I am still stuck on why. Can you elaborate on why many Jewish communal institutions aren’t already part of this movement that counts many Christians?

Also, the Jewish community is not structured like the Christian denominations and doesn’t hold money in a lot of the same ways that Christian organizations do.

This is all beginning to change. We’ve seen some interest by Jewish Federations of North America and some other organizations in the area of impact investing, but still haven’t seen as much interest in shareholder advocacy that’s able to move companies.

Bringing in new faith groups is one of the exciting prospects of our next 50 years.

Why now? What makes it likely that you will get more Jews into shareholder advocacy?

I think there’s been a wake-up call since Jan. 6 where a lot of people, because the corporate response has been so strong, to say perhaps we should be ending our political donations to candidates who are trying to undermine democracy. Maybe that there’s an opportunity to look at new levers of power.

The COVID pandemic also magnified the risks that our ICCR members have been raising for a long time, like health and safety issues in the workplaces.

In the Jewish world, I think that our foundations, and hopefully our federations as well, are beginning to ask not just how do we give away our money in ways that express our values, but also can we leverage it in other ways? Shareholder activism by holding companies accountable for their direct impacts on people and the planet.

Who are the biggest players in the Jewish world? Who do you want to get on board?

I’d love to see this conversation move forward in our federations and I think that Jewish Funders Network has begun the conversation around impact investing, and there are the family foundations. But I also think that we need to get past the idea that any single one of them is too small to have an impact.

Really? Doesn’t moving Fortune 500 companies require you to be big?

I always say that I own one share of Wendy’s and have done an awful lot with that one share. I’ve used it to ask the question of the CEO at the shareholder meeting. I’ve turned it over to a farmworker so that they could ask a question of management forcing them to face the workers impacted by their decisions.

What’s your plan? How are you going to get more Jewish institutions involved?

Well, I just started a month ago. But I have worked for 14 years in the Jewish community and I hold a lot of relationships. I’ll be connecting with Jewish organizations in my new role, explaining who ICCR is and what it does.

Lots of having virtual coffee with people and then seeing if they’ll let ICCR present to their boards and meet at their conferences and just getting to be in the spaces where Jewish decision-makers gather.

Let’s talk about Israel. T’ruah is perceived by some as too critical of Israel. Are you worried that you might go to certain leaders in the Jewish community and face skepticism because of your background?

ICCR priorities are determined by its members and Israel is not one of our priority areas. I would like to really focus on getting the Jewish community involved in the core issues that we work on.

One of my guiding values is that every human being is creating the image of God, and that’s what God guided me at T’ruah as a human rights activist. It’s part of what attracted me to this interfaith community of people at ICCR. And I think that the Jewish community should be attracted to our work because of the ways that we’ve had an impact and our potential for impact.

I don’t think it is helpful for any organization to create a litmus test for people on staff. I think my track record as a human rights activist speaks for itself. And I think I can inspire people that real change is possible.