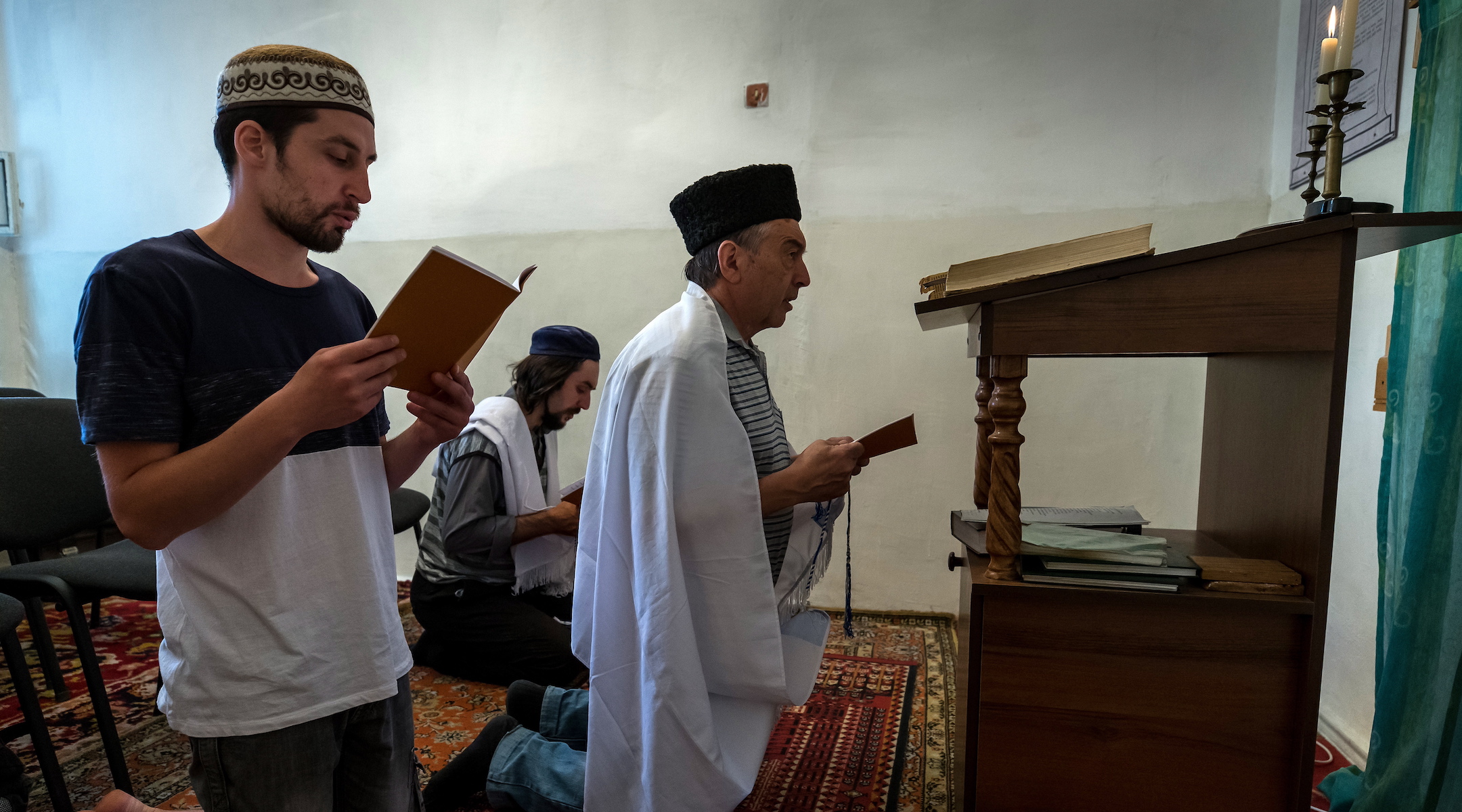 Crimean Karaites attend a religious service in a room outside their house of worship in Simferopol, Crimea, June 9, 2018. (Sergei Malgavko/TASS via Getty Images)
Advertisement

(JTA) — Two tiny sects with Jewish roots have been dragged into yet another diplomatic fight between Russia and Ukraine.

The few hundred Karaites who remain in Ukraine today are remnants of a sect that broke off from mainstream Judaism in eighth-century Iraq. They were documented in Crimea in the 13th century and nearly wiped out during the Holocaust.

The nearly extinct Krymchaks, meanwhile, are related to Karaites but are believed to be more heavily descended from Georgian Jews.

Last month, Ukrainian President Voldymyr Zelensky unveiled a bill that he said was designed to help preserve the heritage of the tiny minority groups, plus the Tatars, a Muslim people.

But by designating those groups “indigenous peoples,” Zelensky, who is himself Jewish, angered Russia, which zealously guards the interests of Ukraine’s ethnic Russian minority.

Russian President Vladimir Putin came out swinging, using the opportunity to further stoke Ukraine’s many preexisting interethnic tensions. He protested the bill’s perceived implication that ethnic Russians, who make up about a third of the population of Ukraine, and other groups are somehow not indigenous to it.

“The division into indigenous, first-class categories of people, second-class and so on — this is definitely completely abhorrent, reminiscent of the theory and practice of Nazi Germany,” Putin said Wednesday on the Russia 1 television channel.

Historians agree that the peoples that are now known as Slavs have inhabited Ukraine long before the arrival about 500 years ago of the Tatars. Ethnic Slavs also arrived centuries before the Jewish sects.

But Slavic cultures are not in danger of disappearing in Ukraine. In fact they are thriving amid a surge of nationalism in the wake of the 2014 conflict, a turbulent revolution that invited Russian meddling.

Things are different for the some 300,000 Crimean Tatars living in Ukraine and in territories internationally recognized as belonging to it.

Russia’s seizure of the Crimean Peninsula from Ukraine in 2014 has separated many families from the Tatar minority, which even before the war was dwindling due to assimilation, emigration and a low birthrate. The financial crisis created by the war, especially in eastern Ukraine where most Tatars lived, has expedited immigration to large cities and the disintegration of centuries-old communities.

The Karaites and Krymchaks are in far worst shape. Most of the 800 or so Karaites live in Crimea. In 2007, the Euro-Asian Jewish Congress estimated there were only 300 Krymchaks in Ukraine.

Recognizing this, Zelensky’s bill “promotes the development of ethnic, cultural, linguistic and religious identity of the indigenous peoples of Ukraine,” the document states. It prescribes special funding for media and cultural projects focused on preserving the heritage, languages and education of the three groups the bill designates.

A bitter dispute divides many ethnic Russians and ethnic Ukrainians in the country, which for the past five years has been dealing with breakaway enclaves of ethnic Russians in its eastern regions.

Ukraine’s Jews – about 50,000, according to a 2020 demographic study — also have been divided by this fight. At issue are the status of the Ukrainian and Russian languages and the state’s attitude to Ukrainian nationalists who collaborated with Nazi Germany to fight against the Soviet Union.

Some Jewish groups, like the Ukrainian Jewish Committee, join ethnic Russians in  vocally opposing the glorification of Nazi collaborators by government and private groups. But other groups, like Vaad, defend Ukrainian nationalist sentiment and opposition to Russia.

Ukraine’s Jewish organizations have not spoken about the bill on indigenous people.

Zelensky, a former actor with little political experience and plummeting approval ratings, has been careful not to anger Ukrainian nationalists. He has expressed displeasure about the naming of streets for nationalists whose troops murdered countless Jews during the Holocaust, but tends to focus on restoring the economy during COVID-19.

In attacking Zelensky over the new bill, Putin referenced Zelensky’s own ethnic identity. He suggested that Zelensky’s designation of Tatars, Karaites and Krymchaks as “indigenous” is an injustice to Ukraine’s Jews, whose presence there was first documented in the 11th century — about 200 years before the newly designated indigenous groups.

“Zelensky himself is a Jew ethnically,” Putin told Russia 1. “I don’t know, maybe he has mixed blood. So what will be done with such people? What will happen to them now? Perhaps their body parts should be measured like in Nazi Germany, so ‘real Aryans’ may be set apart from the fake ones? So now they’ll define a ‘real Ukrainian’?”

In Ukraine, critics of Putin said he was throwing stones from inside a glass house.

“In Russia, indigenous peoples are only allowed to dance around in national costumes,” Syres Bolyayan, a Ukraine-based member of Russia’s tiny Erzya minority – a Finno-Ugric group – told Radio Liberty. “Those who fight for the rights of their people are persecuted for extremism or get forcefully admitted into psychiatric hospitals.”