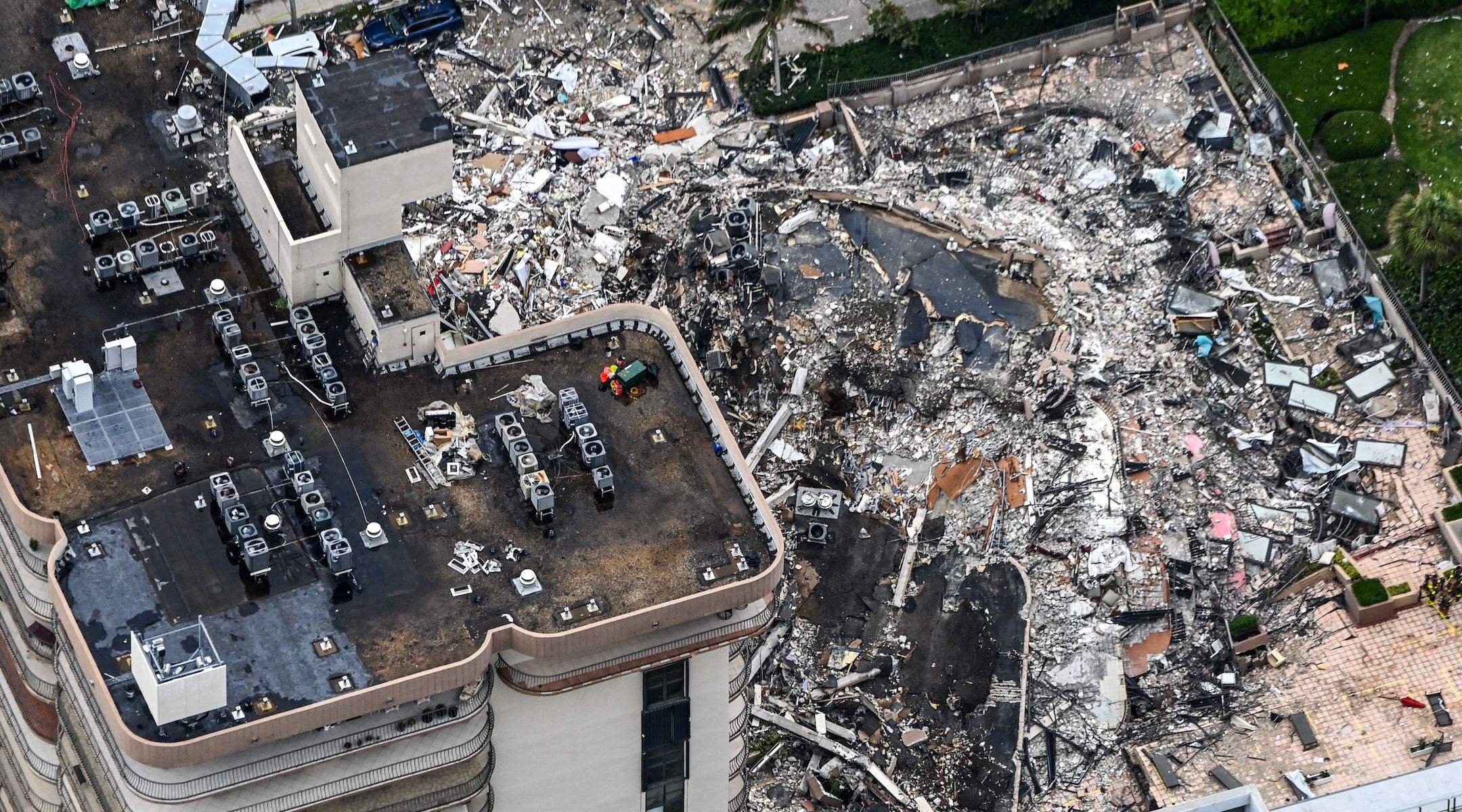 Search and rescue personnel working on site after the partial collapse of the Champlain Towers South in Surfside, Florida on June 24, 2021. (Chandan Khanna/AFP via Getty Images)
Advertisement

(JTA) — As the United States woke up to news of the building collapse in Surfside, Florida, it quickly became clear that the disaster is an American Jewish tragedy.

The 12-story building in the heavily Orthodox enclave near Miami Beach collapsed just before 2 a.m. Thursday, as families slept in its 55 apartments just blocks from the beach. As of Thursday evening, almost 100 people are believed missing, and even as rescue efforts continue, officials fear that many of them are dead.

At least one death has been confirmed. First responders pulled 35 people from the rubble and treated 10 people on the scene with at least two transported to a nearby hospital for care, officials said in a press briefing.

Jewish communities across the United States mobilized Thursday as the scope of devastation became clear. By early morning, Jewish WhatsApp groups were buzzing with names of missing people and requests for prayers. As the day went on, names and photographs of people presumed to have died in the collapse, potentially among the deadliest structural disasters in American history, began circulating as well.

Rabbi Sholom Lipskar of the Shul of Bal Harbour in Surfside was interviewed as he awaited information on missing congregants and worked to provide aid to the community.

“This is something that transcends our capacity for understanding,” he said on CNN. “We accept it and we have to learn, as we do in our culture, resilience and to move forward because challenges don’t hold us back.”

The missing included many Jews. COLLive, an Orthodox news site that covers the Chabad-Lubavitch community, published dozens of names on a list of people to pray for; some of the Hebrew names indicated that parents and children together were among the missing. The Chabad at the University of Chicago announced that the president of its student board was missing along with his girlfriend, also a college student.

An online fundraiser launched by The Shul of Bal Harbour, located a mile north of the collapsed building, had raised $240,000 from more than 2,000 donors within hours. That synagogue and another nearby Chabad also put out calls for toiletries, blankets and toys that could be distributed to survivors. Meanwhile, kosher restaurants in the area distributed food to first responders and to those who were displaced from the portion of the building that had not collapsed.

The Greater Miami Jewish Federation launched a campaign to aid the victims, setting up an emergency fund to assist with immediate as well as long-term needs.

“Be part of the Jewish community’s response,” the federation said in a mass email. “Help those affected by the collapse of the Champlain Towers South in Surfside, FL.”

Meanwhile, though the cause is as yet unknown, local officials are beginning to address how this could have happened.

“This was not an act of God,” Surfside Town Commissioner Eliana Salzhauer told USA Today. “This was not a natural disaster. Buildings don’t just fall.”