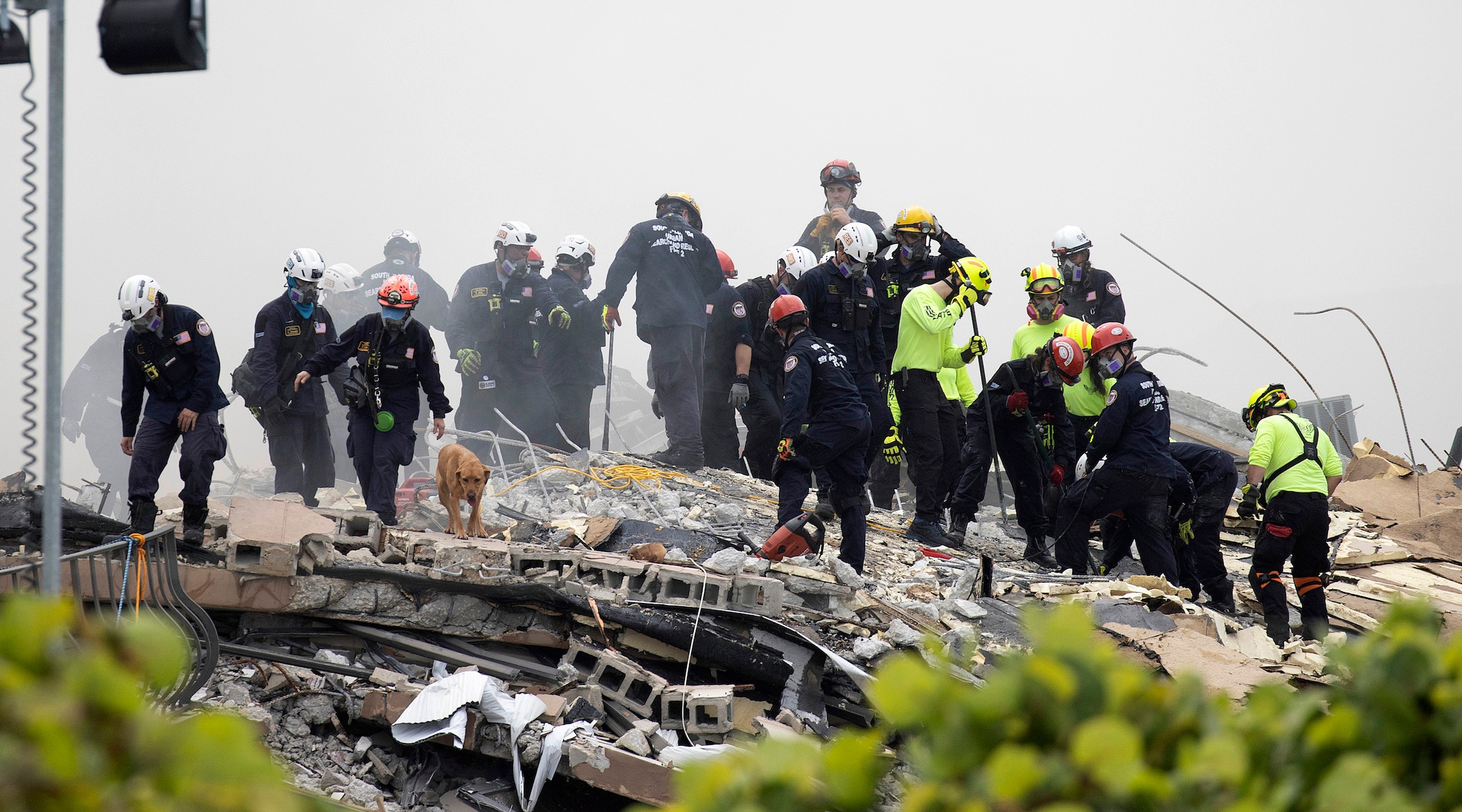 (JTA) — Among Rabbi Mayer Berger’s first thoughts on seeing the 12 stories of the Champlain Tower South pancaked upon themselves: This is like Sept. 11.

Then as now, destruction of unimaginable proportions claimed many lives without warning in a manner that rendered traditional practices for burying the Jewish dead impossible to perform.

Those practices call for bodies to be buried as soon as possible following death after undergoing a purification ritual called tahara. But with both Jewish and non-Jewish victims, and bodies difficult or impossible to identify, catastrophes like 9/11 or what happened in Surfside, Florida, complicate the work of those who volunteer to carry out the traditional practices.

“You have just kind of layers and layers of concrete and you know tiny spaces in between them. And that’s where you have to find the bodies,” said Berger, who leads the New York-based Chesed Shel Emes, one of the largest Orthodox burial societies in the country.

Dozens of local burial society volunteers are on standby in Surfside now in case a body is found, Berger said, and hundreds more in New York have signed up to travel to Florida if they are needed. The local efforts are being coordinated by the organization’s local leaders.

For now, the volunteers are praying from the sidelines for the missing people to be found alive. But they are preparing to be called in when the search and rescue mission becomes a recovery mission, and remaining on standby during Shabbat so they can give non-Jewish workers instructions on proper handling of any bodies recovered then according to Jewish law.

Because rescuers do not know what state the bodies will be in when they are found, the burial society members are preparing to deploy lessons learned from tragedies like 9/11 and the bombings that wracked Israel two decades ago.

Due to the amount of concrete and other building materials at the site, bodies may be buried under heavy layers of material, meaning they may not be found completely intact. They also may be harder to identify, making it more difficult to determine which bodies require a Jewish burial and which do not. And if any blood or other bodily materials are found disconnected from the body, those have to be collected and buried according to Jewish law.

Berger said the authorities in Florida were still working to determine the best way to proceed with the recovery effort. But he was confident that Chesed Shel Emes, which has a longstanding relationship with Florida’s police and medical examiners, would be included throughout so that the bodies of Jewish victims will be treated appropriately according to Jewish law.

“They don’t know yet if they’ll do it like 9/11, bucket by bucket, or if they’ll do it with a different approach,” Berger said of the Surfside site. “Whatever project, we’ll be included in it.”

Recovering bodies quickly is important under Jewish law. In the recent tragedy at Meron, in Israel, where 45 people died in a stampede during holiday celebrations last month, funerals began hours after the incident.

That isn’t possible in Surfside, where it is expected to take days, if not longer, to safely sift through the debris without putting the rescuers at risk or causing more of the building to collapse.

For families of the victims, recovering the remains of their loved ones as quickly as possible is important to the grieving process, according to Rabbi Simkha Weintraub, a social worker and rabbinic director of the Jewish Board of Family and Children’s Services in New York City who ran a support group for the families of 9/11 victims for 9 1/2 years.

“It’s both a terrifying state and a numb state for people: sleeplessness and irritability, not eating. It’s a really difficult place to be,” Weintraub said. “Once there is retrieval of the body they can proceed to go on the mourner’s path, to ready the body for burial, to speak to loved ones, to prepare a eulogy, all the things that are meaningful.”

Over the last year and a half, Chesed Shel Emes was kept busy with a more slow-moving tragedy in the form of the pandemic. During the first wave, which hit New York City’s Orthodox communities especially hard, the group’s volunteers sometimes performed taharas for as many as 50 bodies each day.

That experience has made Berger even more attuned to the trauma that can come with preparing many bodies at once. When the recovery effort begins in Surfside, Berger expects that teams of volunteers at the site will rotate in and out so that no one works too long a shift.

Volunteers shouldn’t underestimate the trauma they can experience working on a recovery like this one, he said, and they should take care of themselves so they can be good stewards for traditions that can bring comfort at a time of grief.