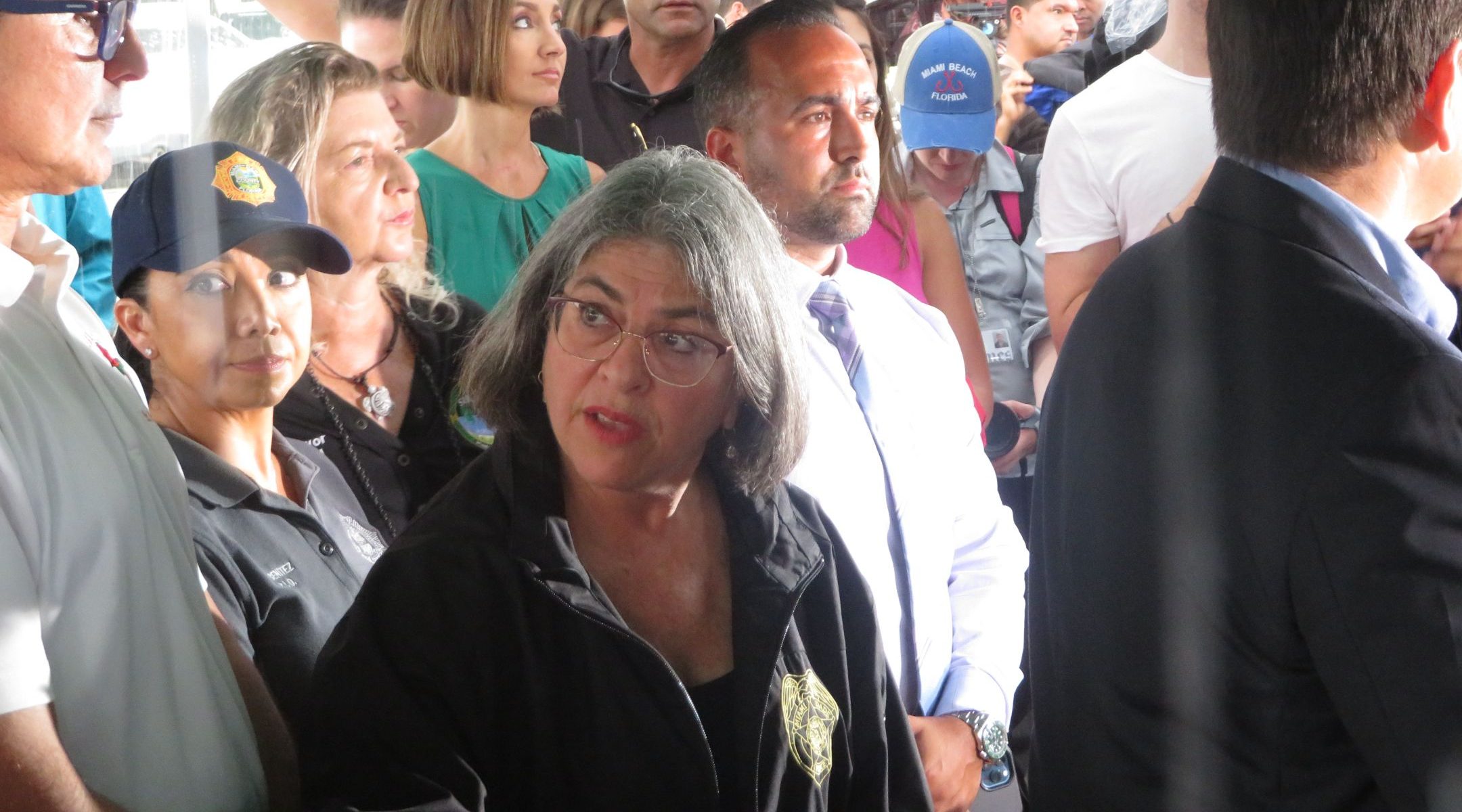 SURFSIDE, Fla. (JTA) — Miami-Dade County Mayor Daniella Levine Cava speaks fluent English and what she calls passable Spanish, but some of her constituents use a Yiddish word to describe her.

This beacon of pride for the local Jewish community has become a fixture of coverage of the deadly collapse of a 13-story condo building in this beachside community north of Miami.

Levine Cava, elected last year, is the first Jewish and the first woman mayor of Florida’s most populous county, as well as the first Democrat to win the job since 2004. The 65-year-old leader has also become the lead spokesperson for the Surfside recovery effort, as the county shares responsibility for building codes and violations along with the municipality. (Surfside has its own mayor, Charles Burkett, but his authority is limited.)

The Miami-Dade mayor appears frequently onsite as rescuers search for survivors, wearing jeans and a windbreaker with the county’s insignia — a contrast to the more formal wear that politicos sometimes favor. At a news conference Saturday, Levine Cava stood next to Sen. Marco Rubio, who sported a dinner jacket.

The other speakers at the news conferences offer hopes, prayers and thanks to the people carrying out the search. Levine Cava delivers details, in modulated tones. She has tracked the number of known dead and missing — nine and 150, respectively, as of the latest count. At least 40 Jews are among the unaccounted for; Surfside’s population of about 6,000 is one-third Jewish.

On Saturday, she described the cutting of a trench around the site to facilitate recovery — “it’s now 125 feet in length. Into the pile, it’s 20 feet wide and 40 feet deep,” she said.

Her tone is one of reassurance: The job will get done by people competent to do it.

“We have six to eight squads that are on the pile actively searching at any given time,” she said. “Hundreds of team members are on standby to rotate as we need a fresh start. So we are not lacking any personnel, but we have the best, we have the right people and the right number, and we are getting it done.”

Into that mix, Levine Cava constantly reminds listeners, she has brought in an Israeli rescue team — a big deal in South Florida, where a reverence for Israel is baked into every facet of local Jewish life.

“We’re grateful for the support that we have embedded from our Israeli and Mexican teams that have joined our operation,” she said.

The mayor met Sunday with Israel’s Diaspora affairs minister, Nachman Shai, and posted the photo on her Twitter feed and Facebook.

“We know how much this means to our entire Jewish community affected by this tragedy,” she said.

Reports have emerged since the collapse that structural engineers found damage at the complex in 2018 and previously. The Champlain Towers building was in the midst of a recertification process when it fell. Burkett, the Surfside mayor, expressed frustration in an interview with The Associated Press on Sunday.

“It should have been a very straightforward thing,” he said. “Buildings in America do not just fall down like this. There is a reason. We need to find out what that reason is.”

Levine Cava has been an unlikely political success story in Miami-Dade. She defeated a popular Republican opponent in a county that the GOP takes for granted in a state that Donald Trump handily won both times he ran for president. She was helped by her Spanish skills in a substantially Cuban county. Those skills were acquired through an upbringing that included stops in Latin America as her businessman father moved to cities such as Rio de Janeiro and Santiago, Chile.

U.S. Rep. Carlos Gimenez, a Republican, praised her leadership in a tweet Monday.

“Under her command, Miami-Dade’s search and rescue teams are doing an exceptional job given the excruciating conditions,” he wrote.

Levine Cava, who is married to a physician, has lived in the county for 40 years. She is a member of Beth Jacob Congregation and told Jewish Insider earlier this year that she and her husband have recently taken up Torah study. 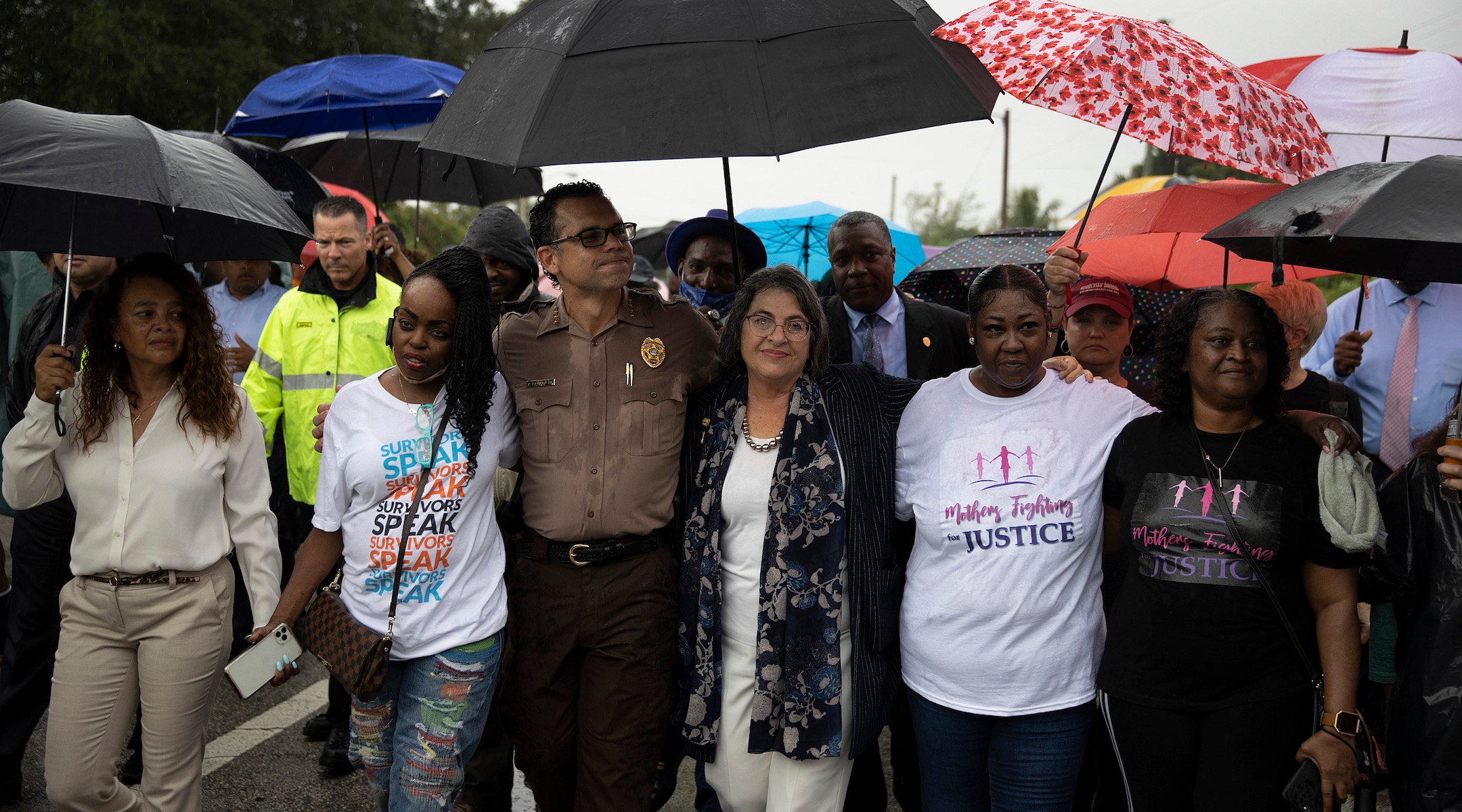 A lawyer, Levine Cava founded Catalyst Miami, which guides poor people through the bureaucratic process to receive benefits available to them, in the 1990s. During that decade, working for the Legal Services of Greater Miami, she assisted families in District 8, the southern part of the county, which had been devastated by Hurricane Andrew in 1994.

Ahead of the 2016 election, she moved from the wealthy enclave of Coral Gables, in District 6, to run in the less well-off District 8. Her profile in the district helped Levine Cava fend off accusations by her opponent that she was beholden to the left and ready to defund the police. On her watch, District 8 has added 80 members to its police force.

Last week, Levine Cava joined other mayors of large cities in meeting with President Joe Biden and asking for increased funding for violence prevention, including funding for police.

In an interview Saturday with the Jewish Telegraphic Agency following her news conference, Levine Cava said she loved Miami-Dade’s mix, particularly as it manifests in Surfside with the many Orthodox Jews and Latinos.

The mayor was sensitive to the demands of Orthodox Jews that she allow on the site of the building collapse Jews who are ready to carry out shemira, the mitzvah of watching over the dead until burial.

“She’s a good friend” of the community, Solomon said.

The community returns the love.

In January, a teenager, Goldi Lieberperson, wrote a column for Jewish Women’s Archive about why she saw Levine Cava as a role model. She described the glee she observed at a meeting of the local chapter of the National Council of Jewish Women following Levine Cava’s election. (Lieberperson’s mother and Levine Cava are NCJW members.)

“All I needed to do was drop in on one of the board’s weekly Zoom meetings to hear several rave reviews about her leadership skills and personal qualities,” Lieberperson wrote.

There were two comments on the post — from Lieberperson’s father and from Levine Cava.

“I love love love this portrait,” the mayor said.