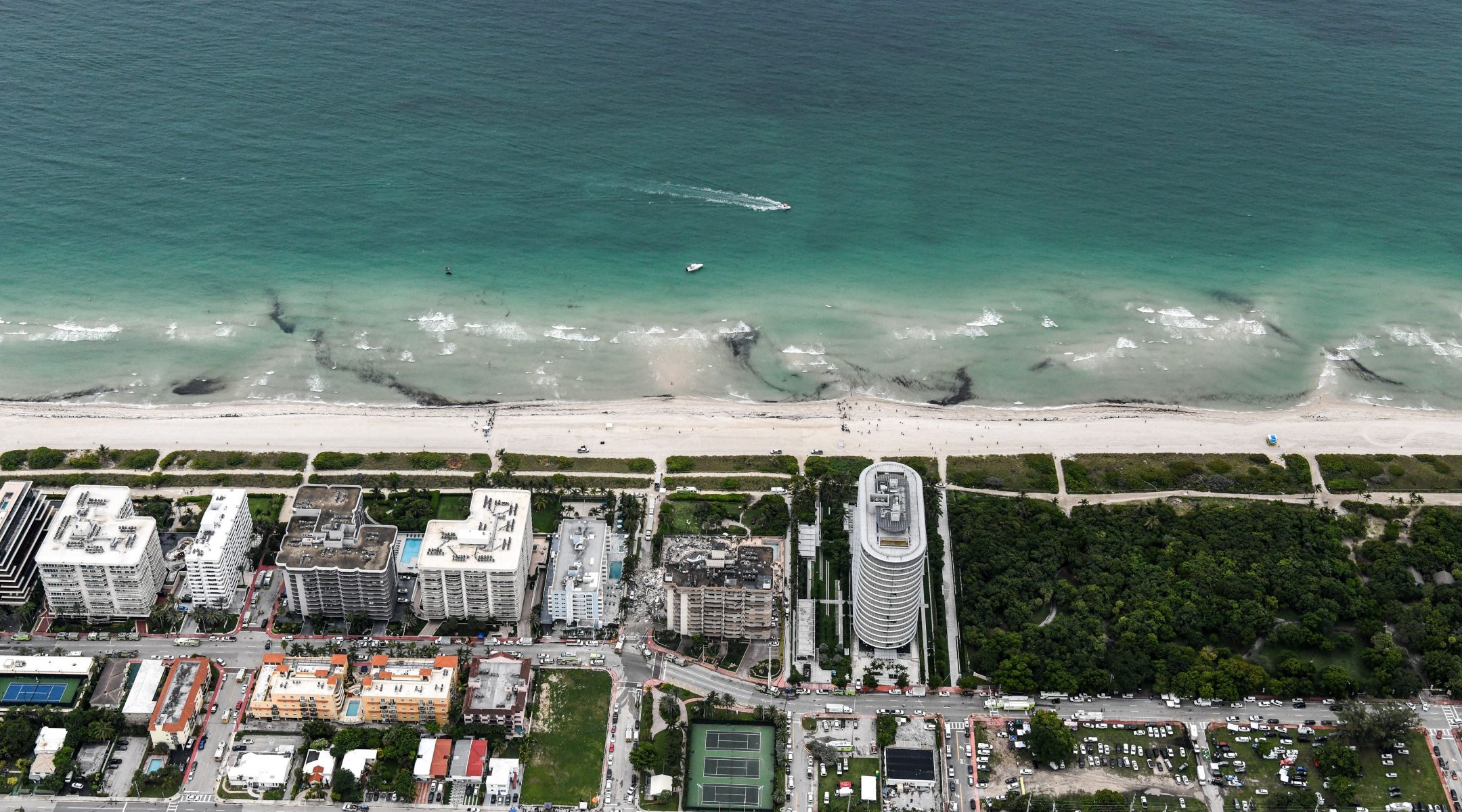 This aerial view shows search and rescue personnel working after the partial collapse of the Champlain Towers South in Surfside, north of Miami Beach, on June 24, 2021. (Chandan Khanna/AFP via Getty)
Advertisement

(JTA) — When a portion of Champlain Towers crumbled early Thursday morning, thrusting the beach town of Surfside, Florida, into tragedy, it also struck at the heart of a thriving and growing Jewish community.

As of Friday morning, four people had been confirmed dead, and local authorities say 159 remain missing. Search and rescue teams are still trying to find survivors in the rubble, and the cause of the disaster is still unknown. Jewish organizations and synagogues have mobilized to raise money and gather supplies for the building’s families.

Here’s what you should know about the Jews in and around Surfside as the city and community cope with an evolving catastrophe.

The area is more than a third Jewish, with a large Orthodox population.

Surfside is one of four small cities that together make up North Beach, the north end of Miami Beach, just east of the city of Miami. The area covers the top of a narrow stretch of land on the Atlantic Ocean. The other towns in North Beach are Bal Harbour, Bay Harbor Islands and Indian Creek.

The area is more than a third Jewish. In total, North Beach has more than 14,000 residents and more than 5,000 Jews, according to Ira Sheskin, who authored a 2014 Jewish population study on the greater Miami area.

Jews began arriving in significant numbers in the 1950s after widespread antisemitic discrimination from local establishments started to fade. Now an area where a hotel once advertised itself with the slogan “Always a view, never a Jew” is home to vibrant, observant Jewish life.

Miami Beach is freckled with synagogues and kosher restaurants. The Jews of North Beach, in particular, are more observant than American Jews as a whole, according to Sheskin. They’re 34% Orthodox, 24% Conservative, 18% Reform and 24% “just Jewish.” By contrast, American Jews more generally are about 10% Orthodox.

Sheskin said Jews are coming to North Beach for the weather, the beach — and the Shul of Bal Harbour, a large congregation led by a Chabad rabbi that Sheskin called “one of the most successful Orthodox shuls in the country.”

“What drew Jews is what draws Jews to Florida,” said Sheskin, a professor of geography at the University of Miami. Of the synagogue, he added, “They’re drawing a lot of people, a lot of young people.”

The area has a significant Latino Jewish population, as well as retirees and young families.

Miami has a large percentage of Hispanic Jews, many of whom come from families that came to the area after leaving Cuba, Colombia, Argentina, Venezuela and elsewhere.

North Beach is no exception. According to Sheskin, the area’s Jewish community is 30% Hispanic, though he said given the small numbers it’s hard to know from which countries North Beach’s Hispanic Jews hail. It’s only 1% Israeli.

The area’s Jews are also 13% Sephardic, compared to 3% of American Jews nationally.

Climate change is a mounting concern — but Jews may still come.

While the cause of the collapse in Surfside is still unknown, officials worry that climate change may have contributed to it. Sheskin says that in general, rising temperatures and sea levels are cause for worry, but he doesn’t expect them to deter Jews from staying in North Beach.

“There’s no question that as the climate changes, South Florida is going to be one of those areas that’s going to suffer,” he said. “The flooding is already there, you’re right along the water, you can get hit with hurricanes.”

He added, “We may see more and more buildings going up away from the water, but there’s such an attraction of getting up in the morning and looking out at the Atlantic.”

And even as the reality of climate change is felt right now, Sheskin said retirees may not place as much weight on the worsening effects that will hit the area down the line.

“It is a place where a significant Jewish population has grown and will probably continue to grow,” he said. “If you move in there and you’re 70 years old, what’s going to happen in 20 or 25 years is not as important.”