At a California Jewish festival, the post-pandemic joy is tempered by concern for rising antisemitism 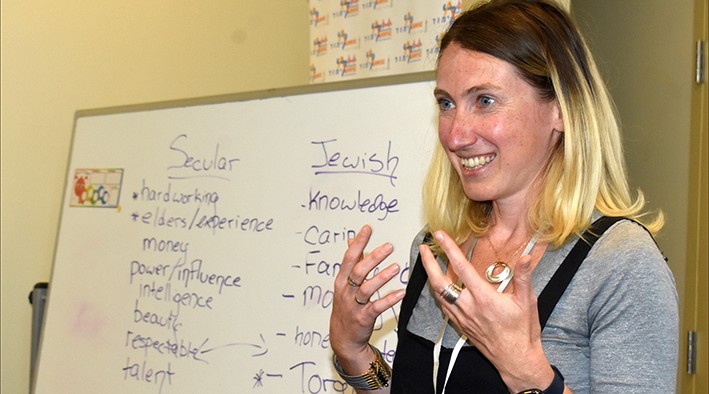 PALO ALTO, Calif. — When more than 150 Jews came together recently in this Silicon Valley city for what was one of the San Francisco area’s first large communal gatherings since the onset of the pandemic more than a year ago, there was more than a little concern in the air.

Speaker after speaker at the event, a Limmud FSU gathering of Russian-speaking Jews, warned of a growing wave of anti-Israel and antisemitic agitation building up in their state, the nation and around the world.

Elina Kaplan, president of a group called the Alliance for Constructive Ethnic Studies, which opposes “anti-Western” revisions to California schools’ ethnic studies curricula, railed against changes to the state’s ethnic studies curricula that the American Jewish Committee has called “fundamentally flawed” for its treatment of Jewish issues.

“I believe there is no bigger issue affecting American Jews today,” Kaplan said, warning that Jews come out looking badly as a result of the changes. “This will impact generations of students to come.”

Kaplan also noted a proposed bill in the U.S. House of Representatives that in the words of its sponsor, Rep. Betty McCollum, D-Minn., seeks to prohibit Israel from using U.S. taxpayer funds to “support the military detention or ill treatment of Palestinian children, and the forcible transfer of civilians in the occupied West Bank.” This week, Democratic Party leaders in California’s Santa Clara County are slated to hold a symbolic vote on whether to back the measure, which appears to have little chance of passage.

A native of Belarus, Kaplan was one of a dozen speakers, rabbis, musicians and entrepreneurs featured at the June 20 gathering organized by Limmud FSU West Coast. The event, held at the Oshman Family JCC in suburban Palo Alto, attracted Russian-speaking Jews from around the Bay Area.

“We all should say ‘baruch Hashem’ that we finally can renew Limmud’s extremely important meetings all around the world, starting today in Palo Alto, but hopefully there will be more and more in the months and years to come,” Shai said, using the Hebrew for “thank God.” “You are very important partners in building the bonds between Israel and the Diaspora, and I have a lot of admiration for what you do.”

Shlomi Kofman, Israel’s San Francisco-based consul general for the Pacific Northwest, referred to a June 9 protest against Israel that prevented the unloading of a Zim container ship at Oakland’s port. He said he’s worried about a “very harsh” wave of anti-Israel sentiment all along the West Coast.

“From Los Angeles up to Seattle, we’re seeing expressions of antisemitism,” said Kofman, a native of the former Soviet republic of Georgia.

“On college campuses, we hear of Jewish students facing intimidation and fear,” he said. “There’s a lack of knowledge, and people are influenced by social media and intersectionality.”

It wasn’t all gloom and doom at the event. Participants also celebrated the renewal of Jewish communal life after a year of social distancing.

“I’m so proud that after a long wait of over a year because of COVID-19, in which we had to stop our operations in the West, we’re coming back big time,” said Chaim Chesler, the Limmud founder. 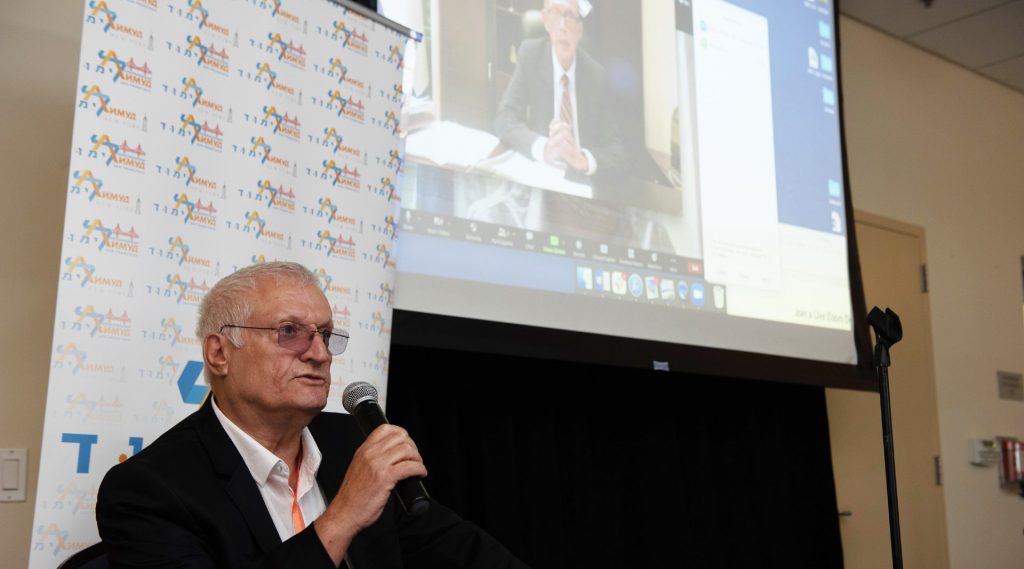 “We’re coming back big time,” Chaim Chesler, founder of Limmud FSU, said of his organization’s in-person activities after a year of relative dormancy due to COVID-19, June 20, 2021. (Igor Khodzinskiy)

Russian-speaking Jews in the Diaspora share a particularly strong bond with Israel, where many have family and where some lived after they first emigrated from the former Soviet Union.

One is Dorian Averbuch, the Moldovan-born CEO of Body Vision Medical. Founded seven years ago in the basement of Averbuch’s home in Ramat Hasharon, Israel, the Palo Alto-based startup aims to fight lung cancer through an advanced imaging system to detect lung lesions.

“We have the potential to increase the lung cancer survival rate from 10% today to 90%,” said Averbuch, whose company uses artificial intelligence instead of electromagnetic sensors when performing bronchoscopies. “The solution we developed shows superior clinical outcomes and offers potential annual savings of $10 billion for U.S. health care systems alone.”

Since the first conference in Moscow 15 years ago, Limmud FSU has put on over 75 events by 13 volunteer teams. Chesler and Sandy Cahn founded the organization, which has been led by Matthew Bronfman and Aaron Frenkel, as chairman and president, since its inception. In all, some 70,000 Russian-speaking Jews across the globe have participated in the group’s events.

“It’s great after this whole sad year, when people were so disconnected, to finally be part of a community again and see people’s faces,” said Ukraine-born Yana Rathman, the daughter of Jewish refuseniks during Soviet times.

Rathman, who has lived in the Bay Area for the past 30 years, offers themed walking tours of San Francisco, including a Jewish city legacy tour.

“The timing of this Limmud is especially important,” she said. “We’re going through confusing times with the rise of antisemitism. Most Russian-speaking Jews have already experienced antisemitism. It’s not some abstract concept for us.”

Marina Yudborovsky, CEO of the Genesis Philanthropy Group, one of Limmud FSU’s funders, said, “There is a deep thirst for opportunities to not just congregate, but also to delve into pressing issues, cultural heritage, the arts and, of course, volunteerism — which is at the heart of any Limmud event.”

The Genesis Philanthropy Group was among the event’s sponsors along with the Claims Conference, the Jewish National Fund (KKL), UJA-Federation of New York, the Blavatnik Family Foundation, philanthropists Diane Wohl and Tom Blumberg, and others.

Eugene Fooksman, a resident of nearby Menlo Park, presented the hugely popular Russian trivia game “What? Where? When?” and has attended many Limmud gatherings over the years.

“It’s great to resume this in-person format and see people I haven’t seen for a long time,” he said. “For two years there was nothing.”

Rabbi Ilana Baird immigrated to Israel in 1993 from Chelyabinsk, in Russia’s Ural Mountains. In 2006, she started a Russian-speaking synagogue in Haifa. Five years later, she and her American husband, a software engineer for Google, settled in the Bay Area. She’s on Limmud FSU’s organizing committee.

“Usually Russian-speaking Jews love to be with each other,” she said. “It’s not even a language or religious thing. They just want to be with people like them.”

Added committee co-chair Lilia Gorshteyn, who left her native Uzbekistan 30 years ago and now lives in Los Gatos: “It’s a great opportunity to be together, but we need more of this. One day is not enough.”