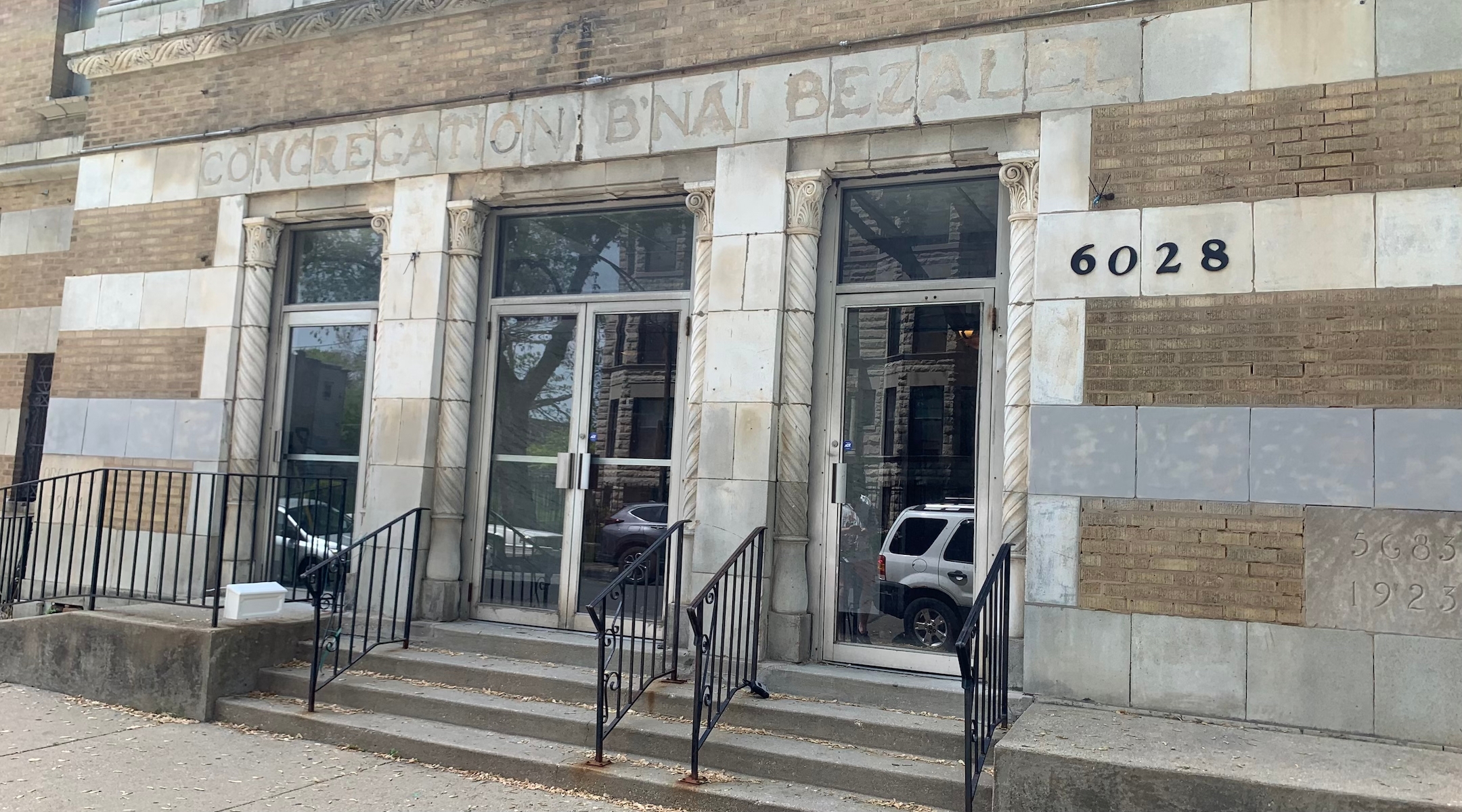 The exterior of Chicago's former B'nei Bezalel building in Woodlawn. Tom and Amber Ginsburg, who are renovating the structure, are inspired by the building's legacy as "a holy place." (Naomi Waxman/JTA)
Advertisement

CHICAGO (JTA) — Perched along a quiet, tree-lined street on this city’s South Side, the worn brick and concrete building on South Champlain Avenue is hard to miss.

The tall structure stands out among newer construction, a huge cross embedded in its front and wrought-iron Star of David window frames visible from the sidewalk. Casual observers can see the year it was erected, 1923, etched into a cornerstone. The letters that were once affixed above a row of doors are gone now, but their remnants are still legible: “Congregation B’nai Bezalel.”

Over the course of nearly a century, this 10,000-square-foot building in the Woodlawn neighborhood has served many religious communities, first as a synagogue and then as a series of churches. Over time, however, the building has fallen into disrepair — stairs sag, paint peels and stained-glass windows pull away from their frames.

Despite its appearance, the former synagogue’s service to its neighborhood isn’t ending. In fact, it’s on the brink of a new chapter.

Artist and teacher Amber Ginsburg and her husband, Dr. Tom Ginsburg of the University of Chicago School of Law, have purchased the property from the city of Chicago.

The pair are devoting themselves to rehabilitating and restoring the 98-year-old building to create an art space for them to work, teach and call home — in the process finding a new approach to Jewish life in a South Side neighborhood that was once a thriving Jewish community. 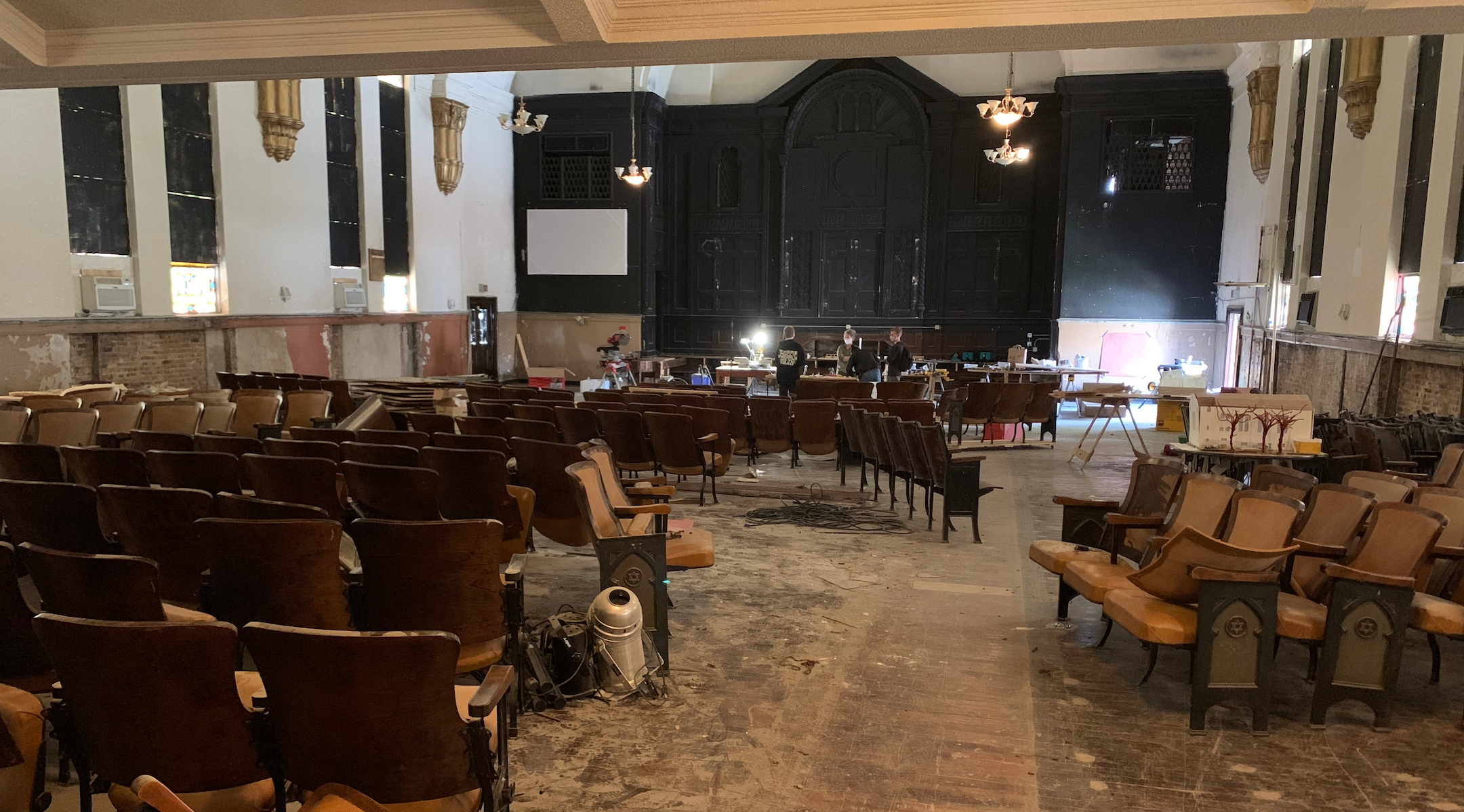 The former Congregation B’nai Bezalel building in Chicago’s Woodlawn neighborhood hasn’t held a synagogue in more than half a century. Now a local Jewish couple plan to rehabilitate the space into a carbon-neutral living and co-working facility with Jewish components. (Naomi Waxman/JTA)

The project is an entirely private one, without financial support from outside organizations. It’s an expensive and expansive endeavor but the Ginsburgs have soldiered on, inspired by the building’s legacy as “a holy place,” says Tom Ginsburg.

Once it’s complete, the couple envision a three-story family compound where their three adult daughters can visit, as well as an art club with rental studios for local creatives in need of workspace.

“It’s kind of an exercise in rethinking property,” Tom Ginsburg says. “We’re going to live here, but it’s not designed to just be our house. It’s designed to be a community space and a place for creative people to come do their thing.”

The Ginsburgs come from markedly different Jewish backgrounds. Tom came of age at Congregation Beth Israel — a Modern Orthodox synagogue in Berkeley, California. Amber’s parents were “hippies,” according to her husband, who had little connection to institutional Jewish life.

Now they attend services at Mishkan Chicago, a progressive nondenominational congregation, and participate in several minyanim, or prayer communities, including Yavneh at UChicago. They anticipate holding a rededication ceremony upon completion and could host minyanim in the future.

The Ginsburgs have been at work on the project for about a year and anticipate that reconstruction will take at least another 10 months. For the time being, project assistants buzz around with power tools and lots of questions, pausing occasionally to wolf down slices of pizza. 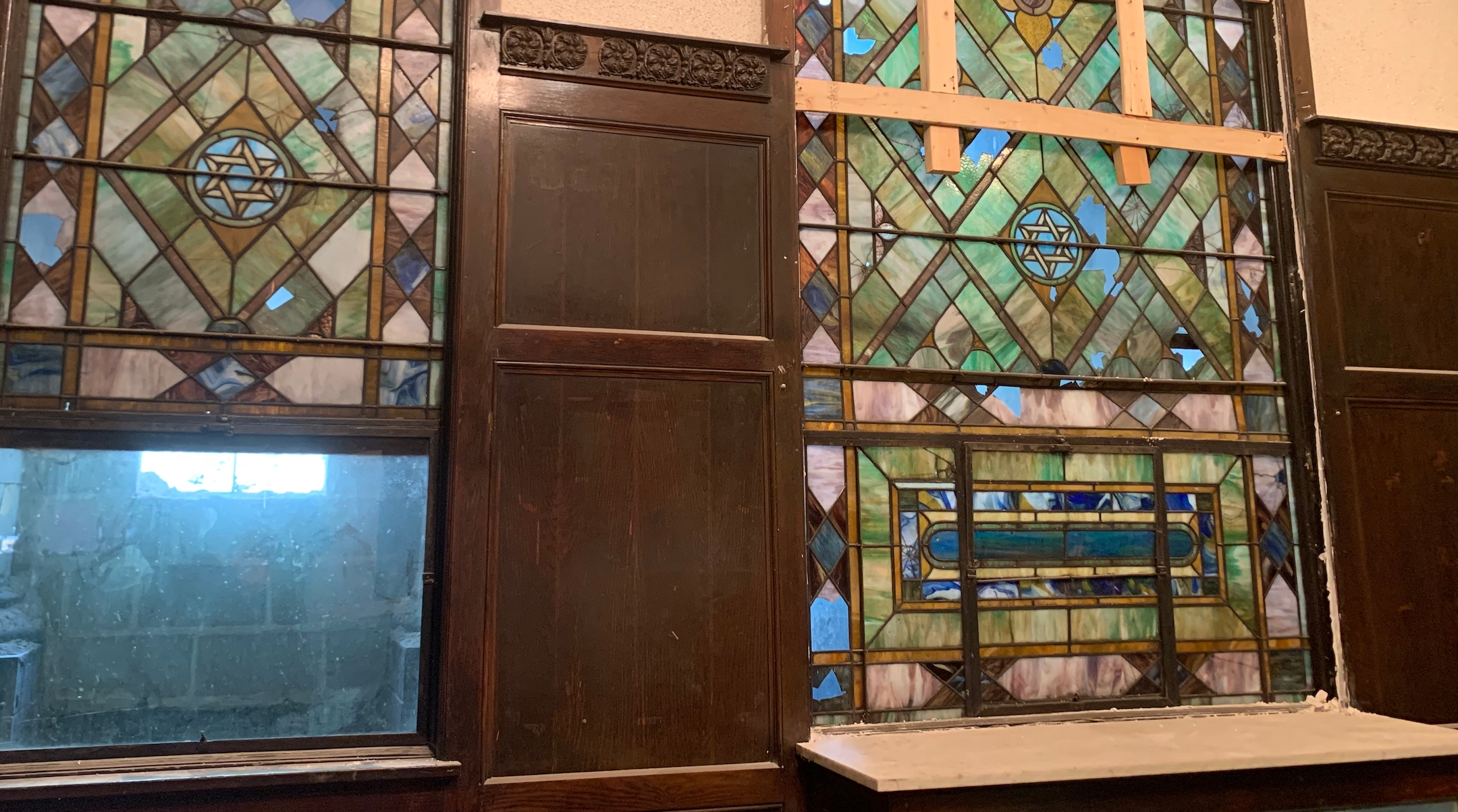 Stained-glass windows featuring Jewish iconography have survived decades longer than the congregation itself in the B’nei Bezalel building. (Naomi Waxman/JTA)

The basement, now gutted, will have its own separate entrance and eventually house a woodshop and artist studios. The former worship space on the main floor — a cavernous expanse with a ceiling that reaches at least 40 feet — will serve a variety of purposes, including as a place for family and community gatherings. The third and top floor, once the women’s section of the congregation, will become a private residence for family members.

B’nai Bezalel was founded in 1904 (accounts differ over its original location), and in the 1920s merged with two other synagogues: Congregations Beth Jacob and Anshe Mizrach, according to the Chicago Jewish Historical Society. The merger resulted in a new name: Beth Jacob B’nai Bezalel Anshe Mizrach. Worshippers from 1919 to 1920 gathered at Drexel Avenue and 62nd Street at a Jewish senior home, the Drexel Home for the Aged.

In 1955 the congregation relocated to South Shore, across the street from another Conservative synagogue, Congregation Habonim. B’nai Bezalel folded in the late ’60s.

The rise and fall of the B’nai Bezalel community mirrors that of the Jewish population of the South Side, which was home to a large and diverse population of Ashkenazi and Sephardic Jews into the 1950s, according to Irving Cutler’s 1996 book “The Jews of Chicago: From Shtetl to Suburb.” Around 1960, Black Chicagoans began moving to the area in large numbers. As a majority of Jewish residents migrated to the suburbs, synagogue membership dropped across many South Side neighborhoods.

In the years that followed, numerous churches used the building, including Freedom Temple Church of God in Christ, Woodlawn Community Church and All Nations Worship Assembly. Cosmopolitan Church of Prayer — a longtime local institution originally founded by the famed gospel singer Dr. Charles George Hayes — held worship services in the space into 2019.

The Ginsburgs have uncovered numerous relics over the course of demolition. Rows and rows of dusty pews bear large Stars of David. Other Star of David designs run throughout the space, left in place even as churches moved in and out of the building. The couple are eager to give away as many pews as possible. They’ve also found a genizah, a storage area for old and worn religious books before burial, that sat hidden beneath a stage for 70 years. The couple plan to display the books to highlight the building’s history. 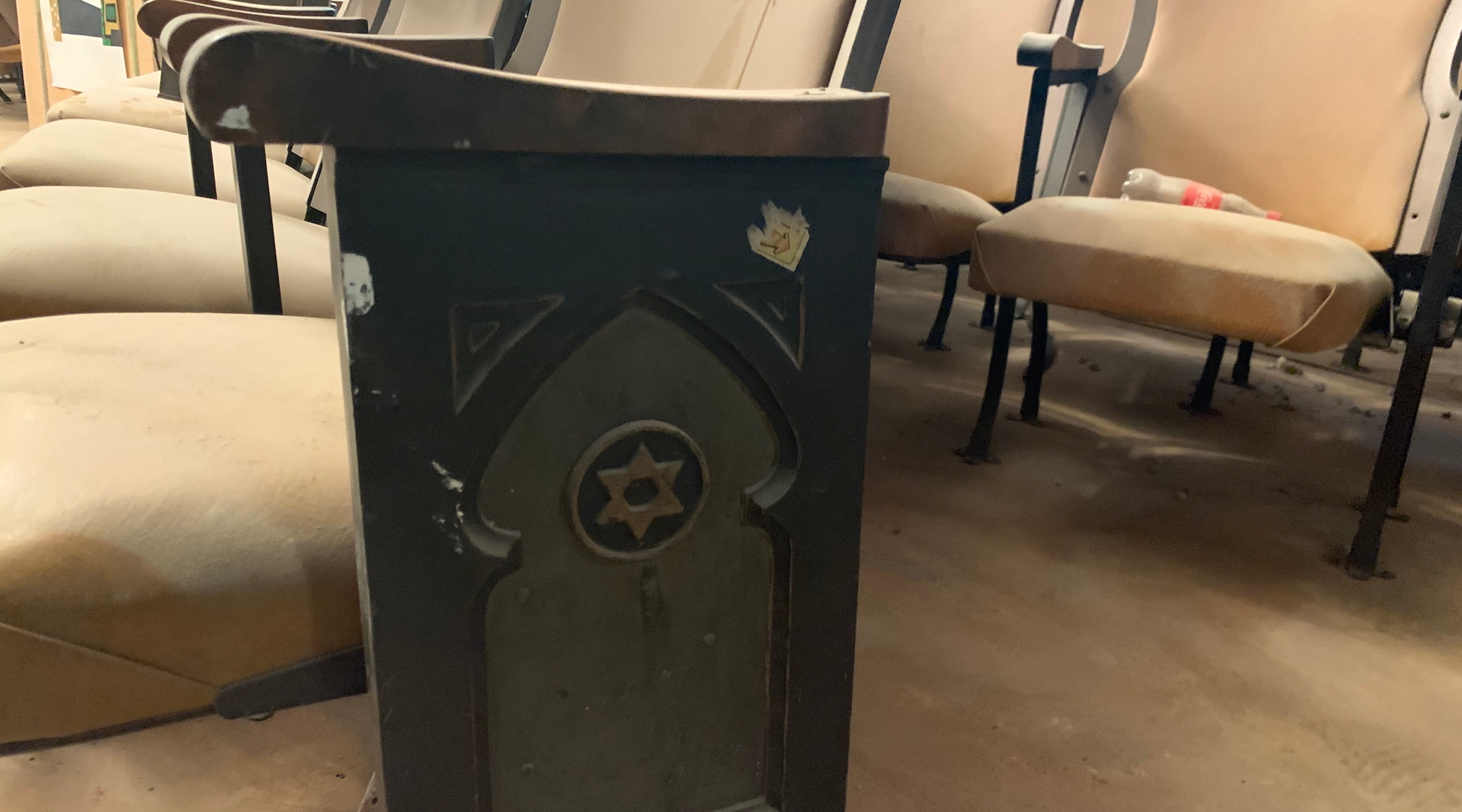 The former B’nei Bezalel building changed hands among several South Side churches over the decades, but signs of its Jewish roots remained — like pews featuring Star of David carvings. The planned renovation will put some of these artifacts from the original congregation on display. (Naomi Waxman/JTA)

The building may be Amber Ginsburg’s largest construction endeavor, but it’s not her first. In 2014, she oversaw a University of Chicago project called KilnHouse, a collaborative 380-square-foot ceramics center made out of a shipping container on campus.

The Woodlawn property leans on the concepts seen in the KilnHouse project: reconstruction, modification, reimagination of a preexisting place. How exactly to reimagine such space is a question that is also bedeviling the Chicago Loop Synagogue and other historic Jewish houses of worship that have fallen on hard times.

Though they are new to this block, the Ginsburgs lived for 12 years in the surrounding neighborhood and are eager to get to know residents. They’ve joined the local neighborhood association and have spent time with their alderman, Jeanette Taylor. They’d like to have a positive relationship with neighbors and embrace the history of Chicago’s Jews.

“We’re not renting this [space] out, we’re not raising anyone’s rent,” Tom Ginsberg says. “We’re just trying to create a public good … there’s a lack of [studios], and we want to encourage folks to make more art. We want to invest in a project that’s bigger than ourselves.”