Health salads — sweet and tangy slaw-like, cabbage-based salads that often include carrots, bell peppers and cucumbers — are a fixture of New York Jewish delis. They’re sold by the pound in the deli case or sometimes generously arrive alongside your complimentary plate of pickles. While the dressing is typically sweetened with sugar, the purported “health” is derived from the volume of raw vegetables and the notable absence of mayonnaise.

If you’re from New Jersey, you may also know this dish as Claremont salad. In the 1950s, the Bauman brothers operated the beloved Claremont Diner in Verona. The North Jersey eatery was famous for its cheesecake, but was known as well for its “courtesy” cabbage salad that came with every meal. Morris and Leo Bauman never claimed to have invented the salad, but it became so popular that local supermarkets started offering Claremont salad in their own deli cases.

East Coast Jewish delis aren’t the only places you can get this addictive salad. Across Eastern Europe and the former Soviet Union, you’ll find salat vitiminniy or vitamin salad. Like health salads, the base is typically made of cabbage and carrot, and may also include cucumber, pepper, tomato, onion and other seasonal summer vegetables. Again, the salad gets its healthy-sounding name because of its contrast to the many richer salads that make up Soviet cuisine, which tend to be made with lots of mayonnaise or sour cream. Vitamin salad dressings are also acidic but tend to include less sugar than health salads. Instead they may include raisins or apples for sweetness.

While the exact origin of health and vitamin salads is unknown, they have been popular among Ashkenazi Jews for decades. In the “Vilna Vegetarian Cookbook” by Fania Lewando, published in 1938, there are four separate vitamin salad recipes. (Lewando,  the first woman to publish a Yiddish vegetarian cookbook in Europe, died in the Holocaust while trying to flee the Vilna ghetto.) Each features a different combination of seasonal raw vegetables, shredded or chopped, and dressed with oil and lemon juice. 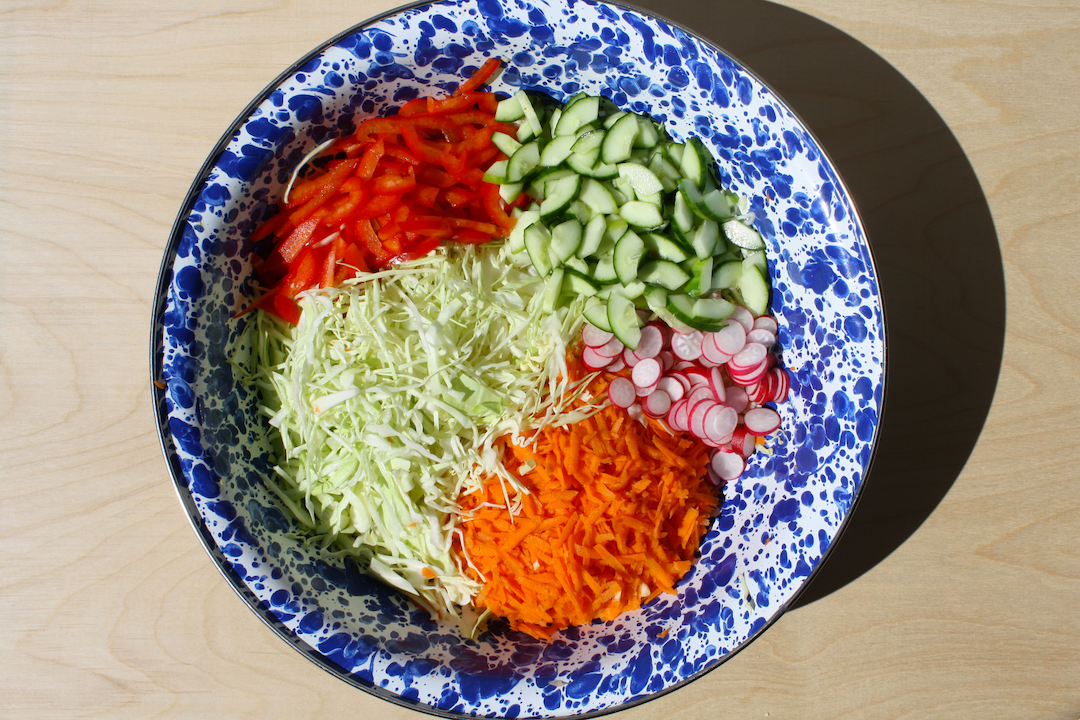 Whatever you call this salad, and however you make it, the idea is the same: Combine lots of hearty, raw vegetables in a salty, acidic, sweetened dressing. The salad will taste great right away and, like everything in the pickle family, it will taste even better as it continues to marinate in the fridge. This salad is refreshing, light and particularly satisfying when served ice cold on a hot summer day.