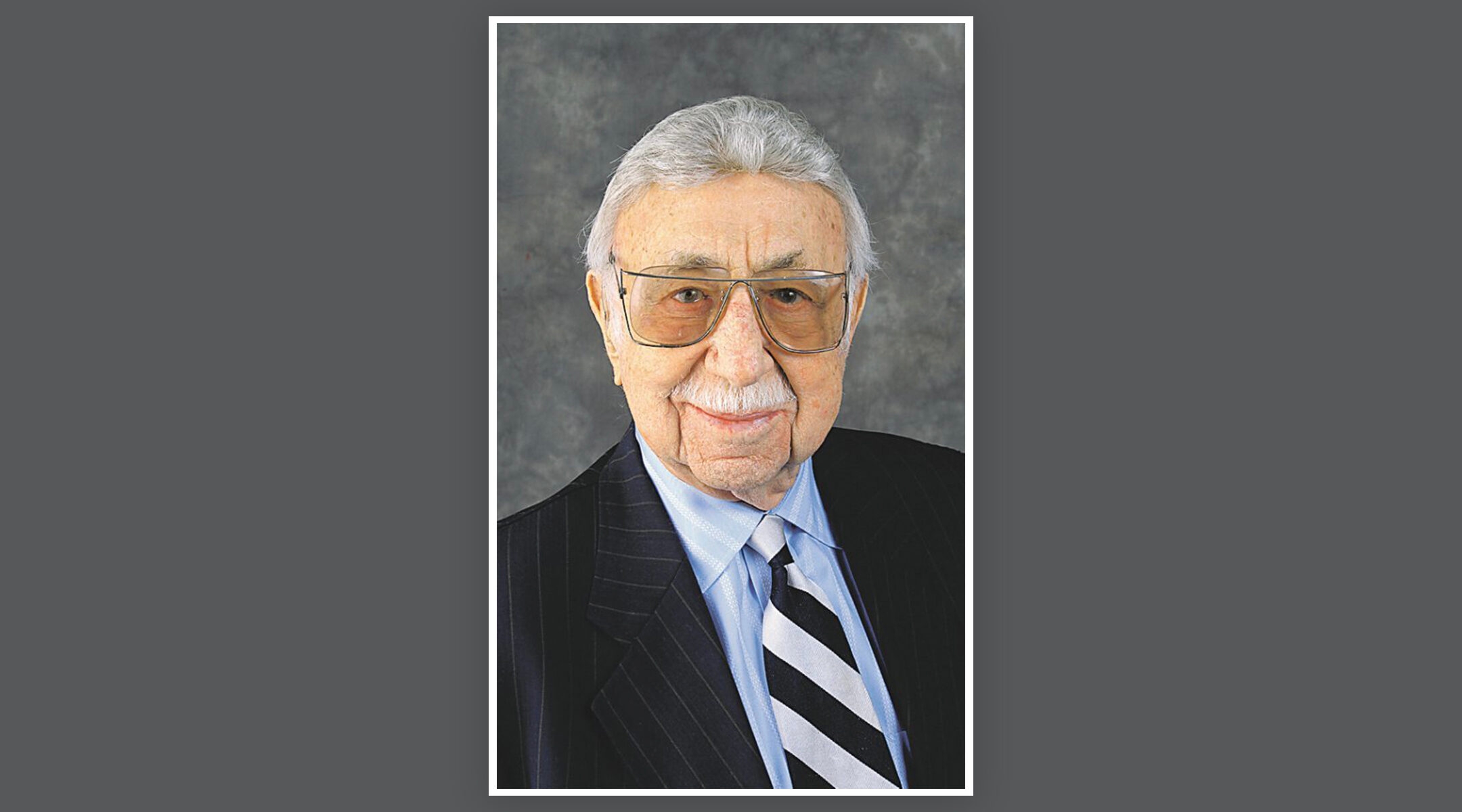 Danny Raskin was meeting with editors, working on ideas for a new column, in the hospital a week before he died. (Courtesy of the Detroit Jewish News)
Advertisement

(JTA) — Even until the very end of his life, in the hospital, 102-year-old Danny Raskin was working on his restaurant column for the Detroit Jewish News.

Raskin, whose historic career with the paper lasted 79 years, was meeting with his editors sharing his plan to retire “The Best of Everything,” the column he had written for decades, and replace it with a new column to be called “Rearview Mirror” that would look back on his century-plus of personal Detroit history.

That was a week before his passing on Monday.

“I think it’s just remarkable that up until the very end he had his wits about him, he was planning for the future,” said Jackie Headapohl, the Jewish News’ current director of editorial services. “He was still talking about writing. Who does that when they’re 102?”

Raskin’s death was announced by the newspaper. He had suffered a fall a couple weeks prior.

Raskin may well have been the longest-tenured journalist in American history, having written a column for the Jewish News every week since 1942, the year of the paper’s founding.

But his journalism career lasted even longer than that: The Jewish News’ founding editor, Philip Slomovitz, recruited Raskin from the Detroit News when he was 23 years old, and he had held previous positions as a reporter at the Lansing State Journal and, as a teenager, a columnist with the local Jewish Center newspaper.

For his first few decades at the Jewish News, Raskin penned an about-town column called “Listening Post” and worked as an ad salesman. But an affinity for the downtown Detroit restaurant scene led to him writing dining columns in addition to his other duties. From 1964 to 1986, Raskin wrote two columns a week, while also working as the paper’s top ad salesman — besting coworkers who were four decades younger than him.

In 1986, Raskin began to solely focus on restaurant reviews with his omnibus column “The Best of Everything,” which he penned until a few weeks before his death. He was a one-man encyclopedia of the metro Detroit dining scene, chronicling its changing fortunes amid the struggle and revival of the Motor City, and ending as the COVID-19 era thrust the restaurant industry into a new period of uncertainty.

Arthur Horwitz, former editor and publisher of the Jewish News, estimated that Raskin wrote more than 5,000 columns over the course of his career.

“Danny Raskin was the Lou Gehrig and the Cal Ripkin Jr. of column writing,” Horwitz said. “His readers were waiting every week for his column, and it kept him motivated and going for his entire life. He would not disappoint his audience. It was as if his own life depended on it.”

In Raskin’s final original column, which ran June 25, he implored diners to generously tip their servers and mused about the lasting impression that a good restaurant can leave on its customers, even during a time when many eateries were forced to close.

“If stoppage of restaurant dining ever did occur,” he wrote, “many eateries would be forgotten about … But not those who have made excellent marks for their customers to always remember.”

Raskin’s column, which Jewish News readers often cited as the paper’s most popular item, featured a mix of new restaurant coverage; remembrances of long-shuttered dining establishments from earlier eras; a portfolio of “Oldie but Goodie” jokes; and well-wishes to the community, all in Raskin’s distinctive, ellipses-heavy writing style. His column was the one constant in the history of the Jewish News, outlasting six editors (including this author); a merger with a rival Jewish paper; two sales; multiple redesigns; and, in 2020, a transition to nonprofit status.

“He was one of the most unique people I’ve ever met,” longtime Jewish News copy editor David Sachs told the Jewish Telegraphic Agency. “He enjoyed life to the fullest, and he had the highest standards of his writing.”

Sachs recalled that if Raskin didn’t like a restaurant, he preferred not to write a negative review. Instead “he would talk to the owner and tell him what he was doing wrong in the hopes that the owner would improve.”

“He realized how difficult it was for these entrepreneurs to stay in business,” Sachs said.

A Detroit native, Raskin grew up surrounded by members of the Purple Gang, the Prohibition-era Jewish bootlegger mob. In a 2012 interview with the Jewish News on the occasion of the paper’s 70th anniversary, Raskin recalled how he had once witnessed the “Purple boys” threaten a man at gunpoint over his antisemitic comments. He also said that a Jewish friend from Detroit serving as an infantryman during World War II dropped a bomb on Germany with “From Danny Raskin to Hitler” painted on the side.

“We put the picture in the paper,” Raskin recalled.

Notwithstanding brief side gigs in the recording industry (he passed on a young Barbra Streisand because he didn’t like her voice) and local TV advertising (he worked with legendary Detroit Tigers announcer Ernie Harwell), Raskin’s biggest and longest love was the Jewish News.

Raskin was married three times. His third wife, Frieda, was with him for 35 years until her death in 2010. He is survived by his son, Scott, president of the data marketing company Quotient Technology, and two grandchildren.

The author was the editor of the Detroit Jewish News in 2020-21.