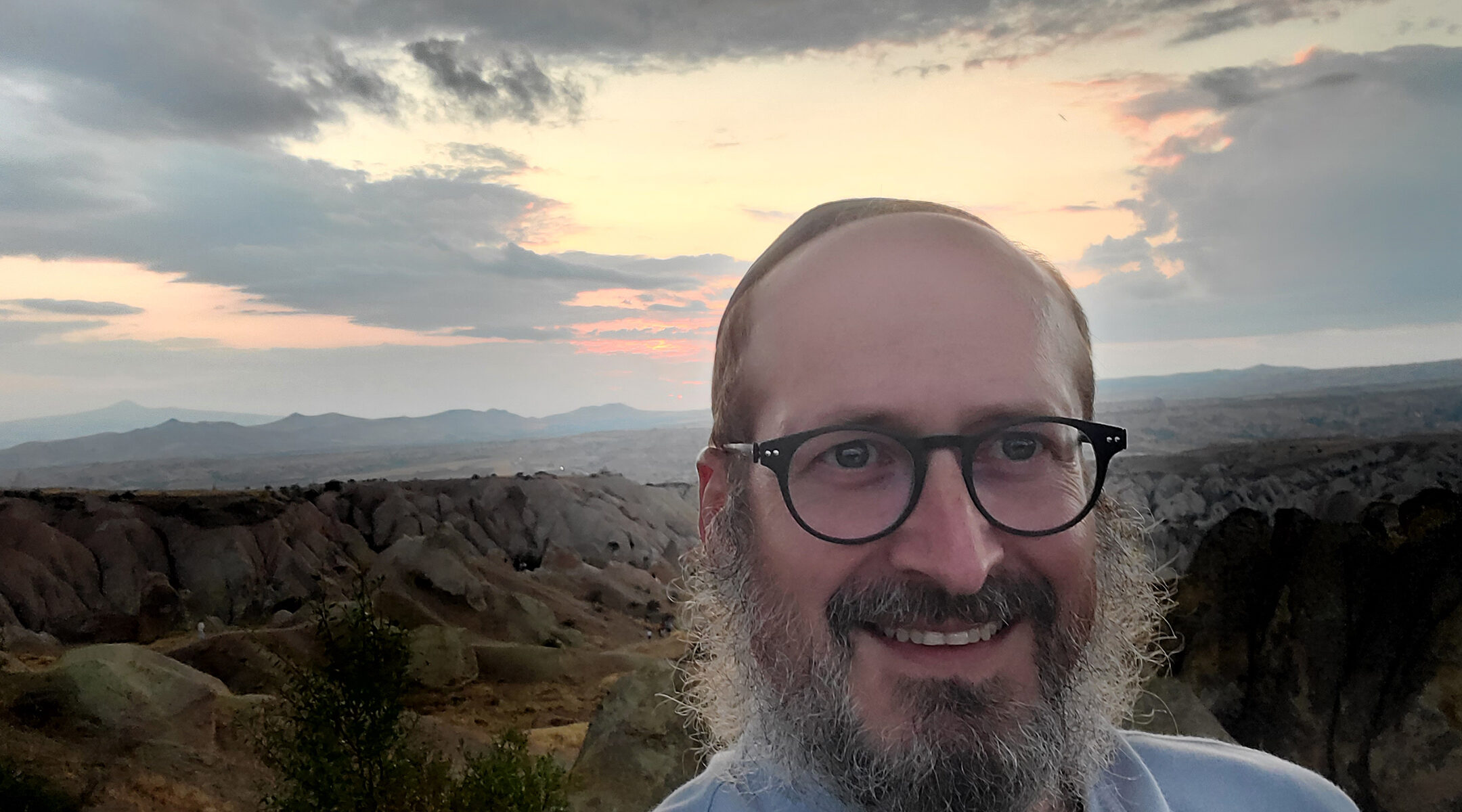 Rabbi Mendy Chitrik takes a selfie at sunset in Turkey on Aug. 9, 2021. (Courtesy of Chitrik)
Advertisement

(JTA) — Few Jews know Turkey like Mendy Chitrik, a rabbi who oversees kosher certification in dozens of factories across the country.

Over the past 20 years, Chitrik, a Chabad emissary who was born in Israel, has been logging thousands of miles annually across that country, which is larger than Texas and whose 12,000 Jews almost all live in Istanbul, the country’s largest city.

He’s made some discoveries along the way, from previously undocumented gravesites to observant Jews living far from Istanbul to unusual customs borne of cooperation with local Muslims.

This summer, Chitrik is documenting it all on Twitter during a three-week road trip across Turkey that includes stops at well known Jewish landmarks and off-the-beaten path sites alike. His goal is to raise awareness about a history that he says “falls between the cracks” for Jews who see the world as divided between an Ashkenazi and Sephardic Diaspora — and so far he feels he is succeeding.

“People — mostly non-Jews — who follow our trip invite us to drop by. Jews of Turkish and Greek descent let us know how moved they are,” Chitrik told the Jewish Telegraphic Agency. “And people who are just interested in the subject let us know how grateful they are for giving them access to these sites. It’s very heartwarming.”

Chitrik is doing it all while wearing a kippah and tzitzit, the fringes that some Orthodox Jews let hang outside their pants, making him an unusual sight in a Muslim country whose president last year drew a rebuke from the United States for a speech that was laced with antisemitism.

Online reaction to his road trip has included similar sentiments. Huseyin Hakki Kahveci, a nationalist author and journalist with more than 60,000 followers, wrote on Twitter that Chitrik’s itinerary “overlaps with places where there are fires,” referencing a spate of forest fires that have caused thousands to flee their homes in Turkey in recent days. “Rabbis know kabbalah, black magic, as well,” he wrote.

But in Chitrik’s experience, antisemitic attitudes rarely trickle down to the people he meets in his travels. Imams devote hours of their days to help him look for the sites he is investigating, Chitrik said. People on the street invite him to dinner and express their feeling of solidarity and fraternity with Jews.

“Coexistence of Jews and Muslims isn’t just a slogan for conferences,” said Chitrik, who chairs the Alliance of Rabbis in Islamic States, a body set up in 2019 to support Jewish life in Muslim countries. “It is and was reality.”

The road trip, which Chitrik and his son Chaim began on July 26, includes well-known stops that demonstrate Turkish Jewry’s deep roots, such as the ruins of the Sardis Synagogue. One of antiquity’s largest and oldest synagogues, built at least 1,500 years ago, it’s also famous for its well-preserved mosaic floor and walls, which were unearthed in 1962.

But there are also monuments that few people outside the Chitrik family even know exist, such as headstones of Jewish soldiers at Gallipoli, the site of one of the bloodiest and best known battles of World War I. The remains of Jews who fought for the Ottoman Empire lie there alongside their coreligionists from the French and British armies – part of a death toll of about 100,000 men.

In Tire (pronounced “teereh”), a once-great Jewish scholarly center located about 300 miles south of Istanbul, Chitrik went in search of a Jewish cemetery that locals had told him had been destroyed and buried beneath a new hospital.

“We found the hospital, and in a distant corner – intact headstones that I don’t think anyone knew were there,” he told JTA. After exposing and weeding the remnant patch of the cemetery – an arduous task any day, which they performed when it was 107°F — the Chitriks said the Mourner’s Kaddish over the graves.

The Chitriks’ road trip is about more than gravestones.

Wherever they go, they try to engage local Jews and Muslims, including clergy, exposing small parts of the rich but fading tapestry of customs that Turkish Jews have formed over centuries.

In Bursa, a city located 80 miles southeast of Istanbul, the Major Synagogue, a newly renovated structure that functions mostly as a museum, features rimonim, ornaments that are placed on Torah scrolls, that have a star and crescent — typical Muslim symbols.

When Chitrik finished examining the scrolls, he handed the keys to the Torah ark back to the caretaker, Yusuf. But instead of taking the key in his palm, Yusuf asked Chitrik to place the key on the back of his hand. Observing Chitrik’s confusion, the head of the Jewish community of Bursa, Leon Elnekave, explained in Ladino, the language of Sephardic Jews, “This way you won’t fight” over the key and the ark.

“I am not sure I really understand why, but I for sure won’t fight over it,” Chitrik wrote on Twitter about that interaction, which he described as a minhag, or custom, unique to Bursa.

Chitrik also introduced his followers to another Turkish-Jewish tradition, “mirkado,” possibly derived from “mercado,” the Spanish word for market. In this tradition, if a child was born after miscarriages or illness, the child is “bought” by a relative, who takes care of the needs until the child is 7 or 8 in an effort to cheat fate during those critical years.

Mirkado “is for changing the mazal,” Hebrew for luck, Moshe Habif, a member of the chevra kadisha, the Jewish burial society that takes care of burials in nearby Izmir, told Chitrik. With his followers, Chitrik shared the headstone of Yitzhak Polikar, who died at a very old age in Izmir and was buried at its Jewish cemetery in 1912. It showed that he had been “bought” as a child.

Although Bursa has only 60 remaining Jews, Elnekave is confident the community will persevere, he said.

“Every day one should work so that Judaism should thrive — and it will,” he told Chitrik’s camera in a mixture of Turkish and Ladino.

Chitrik’s travels are also taking him through the relics of one one of Turkey’s main Jewish groups, the Romaniotes, that, rather than thriving, was nearly wiped out by the Nazis.

Predating the Sephardic-Ashkenazi divide and belonging to neither group, the Romaniotes trace their presence in Greece and Turkey back to 70 AD, following the destruction of the Second Temple in Jerusalem.

Once the most prominent Jewish group in the region, the Romaniotes exist today primarily as a dwindling community only in Ioannina, Greece. Only a few dozen Romaniote Jews remain in Turkey today.

Chitrik attributes the lack of support for preserving Jewish heritage sites in Turkey to the near-annihilation of the Romaniotes, which means there are few Jewish families with a personal interest in their heritage, in contrast with the way that Sephardic and Ashkenazi Jews are invested in North Africa and Eastern Europe.

Instead, the fate of Jewish sites is left up to local authorities, leading to a stark mix of results.

Turkish municipalities in recent years have renovated multiple synagogues without much fanfare and publicity.

One stunning example is the Bergama Yabets Synagogue near Izmir. It was used as a stable until just several years ago, authorities renovated it, giving it a mesmerizing interior featuring checkered marble floors, stained glasses and a unique bimah, or pulpit, ornamented with modern-looking metal stripes and marble that phase into neoclassical columns with gold-colored wooden reliefs on the ceiling.

But other Jewish heritage sites, some very ancient, lie exposed to the elements and antiquities thieves, such as the ancient synagogue of Priene near Izmir. Its massive stones, including sculpted granite classical columns, which are coveted garden ornaments in the region, lie strewn across its ruins, and used at times by locals as picnic tables.

In Milas, a town further south of Priene, the local synagogue was torn down a few years ago, an education center built above it.

The Chitriks, who are traveling with a friend, Eliezer, also discovered graves that had been desecrated due to construction near the Milas Jewish cemetery, and reburied human bones scattered around them.

They also met Jews who asked for help in sustaining their Jewish practices far from the heart of Turkish Jewry. On Twitter, a Jewish woman from Antakya, a city located 500 miles from Istanbul near the border with Syria, asked the Chitriks to bring knives to perform kosher slaughter. To her and the handful of other Jews living in Antakya, the visit by the rabbi, who is a shochet, kosher butcher, was a rare opportunity to stock up on kosher meat.

Despite the wealth of its Jewish history, Turkey has seen little if at all of the organized road trips in the footsteps of Jewish heritage that have for years taken place in Europe. Chitrik hopes that can change.

“Turkey is a huge country, which complicates matters, but that doesn’t mean there isn’t potential for these kinds of trips here,” Chitrik said. “I hope my Twitter road trip gives people an appetite for it.”