Why are we still so obsessed with Hitler? An unconventional new documentary leaves the answer just out of reach. 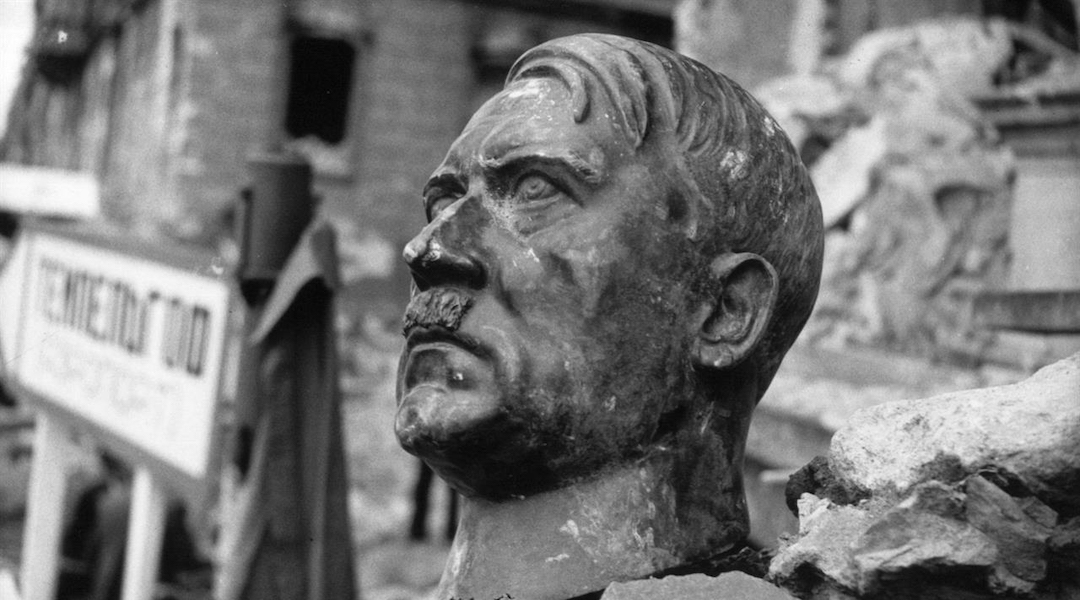 A still from the documentary "The Meaning of Hitler." (IFC Films)
Advertisement

(JTA) — “Is it possible to make a film like this without contributing to the Nazi Cinematic Universe?”

This line of narration comes early in “The Meaning of Hitler,” a fiery new documentary about the persistent hold Nazism has on our culture, directed by Petra Epperlein and Michael Tucker. It’s a cheeky reference to the Marvel Cinematic Universe, a world shared by the comic book giant’s many onscreen superhero characters. Like Marvel fandom, Hitler and Nazi obsession encourages cult-like devotion to a sprawling, interconnected alternate reality — except the Nazi Cinematic Universe’s shared fantasy is that Hitler had the right idea about the Jews.

Based on the classic book-length essay by the German journalist Raimund Pretzel (published under his pseudonym of Sebastian Haffner), “The Meaning of Hitler” is a globetrotting excavation into the heart of our society’s fascination with Nazis, antisemitism and fascist ideology. Why does he remain so visible today? Why have we anointed him as a figure of unique evil, rather than an evil that could be replicated in the modern day? And why do so many people still seem to admire or — worse — unconsciously emulate him?

Using Pretzel’s original text as a jumping-off point, Epperlein and Tucker throw side-eyes at the entertainment and political apparatuses that have propped up the Hitler myth in the decades since his bunker suicide. Their efforts, like the “Nazi Cinematic Universe” line, simultaneously hope to be sarcastic, self-deprecating, and genuinely insightful.

All of this is accomplished in an unusual style that mostly rejects the patient, structural framework of a standard documentary in favor of a free-associative approach more befitting an internet skim (or one of Leni Riefenstahl’s propaganda videos the film takes care to dissect). Large text flashes on screen (words such as “Savior” and “Evil”) as we move through space and time at breakneck pace. The viewer sees archival footage, which collides with present-day memorials, YouTube videos and clips from Western art (from “The Producers” to “Star Wars”). We are in Hitler’s bunker; now we’re at the site of his birth; wait, now we’re at a World Cup celebration in France; now we’re driving down the empty COVID-afflicted streets of New York; now we’re at the site of the Sobibor death camp, which the Nazis took care to destroy any trace of, and which therefore makes a handy metaphor for the dangers of forgetting or denying the lessons of the past.

We get some traditional biographical material on Hitler, too, and — this being 2021 — much discussion of present-day political moments that the filmmakers offer as parallels to fascist thinking, including Europe’s reactions to the migrant crisis; the rise of far-right nationalism in Germany and Poland; the Charlottesville march; and even former President Donald Trump. The directors know they are not the first to make any of these parallels: a cheeky opening sequence places its source material alongside Hannah Arendt’s “The Origins of Totalitarianism,” Timothy Snyder’s “On Tyranny” and several other books that make up the new canon for cosmopolitans concerned about fascism. (Is this also, in a way, a Nazi Literary Universe?)

A segment on antisemitism makes the surprising choice to juxtapose an interview with Deborah Lipstadt (recently nominated to be the U.S. State Department’s antisemitism envoy) with segments featuring disgraced British author David Irving. Yes, that David Irving — the one whose 1996 libel trial against Lipstadt infamously ended with a British court ruling that he was a Holocaust denier (and inspired the movie “Denial”). The filmmakers attend one of Irving’s distorted tours of Nazi death camps, during which they record him making all manner of antisemitic comments; they are appalled by what he stands for, and seem mainly fascinated that a man like him exists.

Irving’s inclusion in the film is the exception, though. The other talking heads are a familiar who’s-who of reputable WWII scholars, including Saul Friedländer and Yehuda Bauer, both Czech-born Jews whose personal Nazi survival stories inform their commitment to scholarship even in their advancing age, along with Nazi hunters Beate and Serge Klarsfeld, and assorted other experts and tour guides. All these figures who have devoted their entire lives to separating history from propaganda now must look on as the propaganda threatens to win out, and sensationalist documentaries about Nazis give way to ironic right-wing YouTube memes.

Everywhere we go, we also see the boom mics and clapperboards that remind us we are watching a movie — a trick Epperlein and Tucker also employed in their previous documentary, “Karl Marx City,” which investigated Epperlein’s father’s suicide in the former East Germany and which, like this film, was also a commentary on modern-day totalitarian forces. There, the filmmakers sought to make visible what the Stasi had repressed. Here, their deliberate presence has the feeling of a YouTube confessional, as they continually ask themselves what good their movie will do. Why take 90 minutes to warn everyone yet again about Hitler, they wonder, when every mention of him only seems to do more harm than good?

“The Meaning of Hitler” opened in theaters and on-demand Aug. 13.