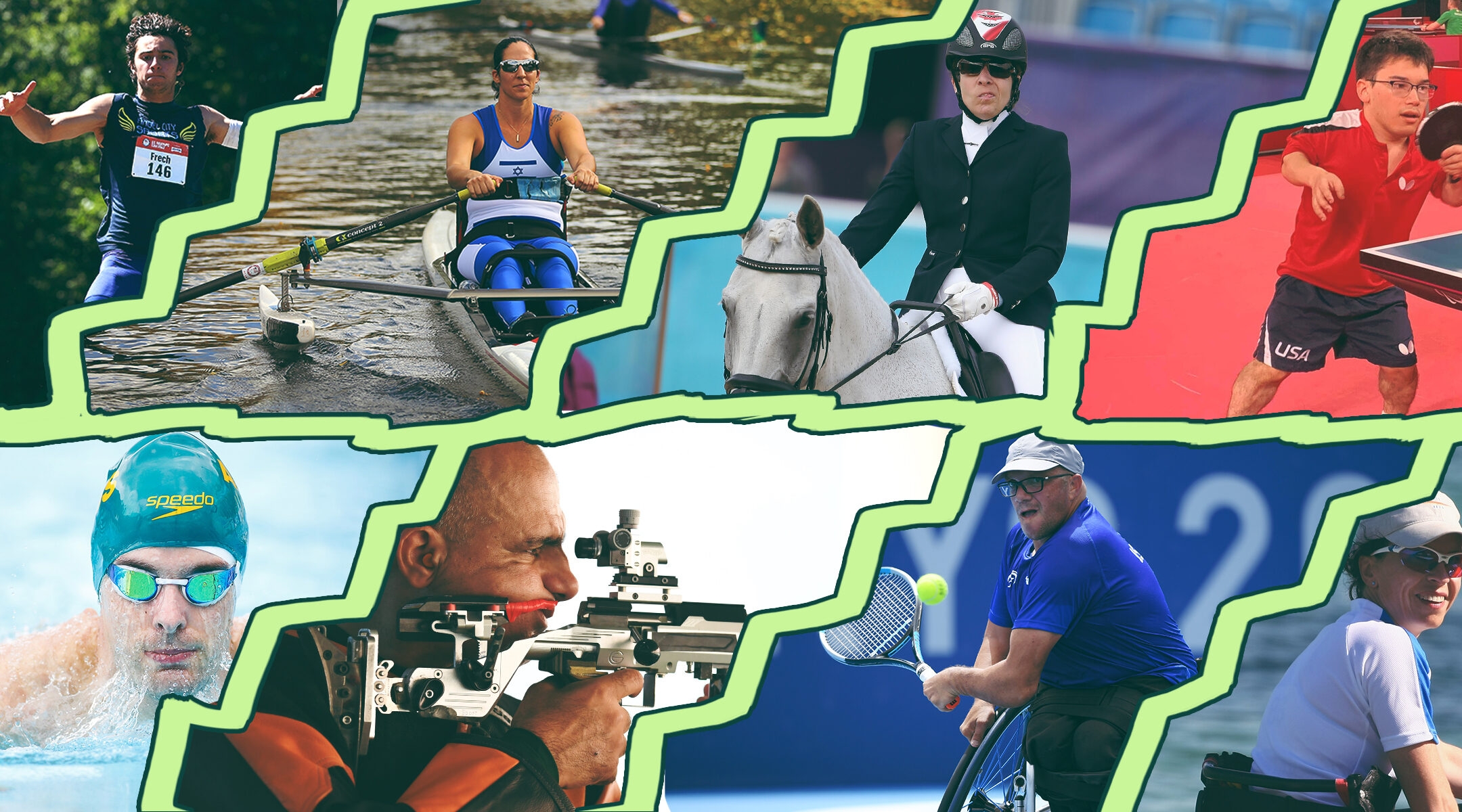 (JTA) — Weeks after the Olympics came to a close, Tokyo is filled again with athletes, for the 2020 Tokyo Paralympics. Among them are dozens of Jewish athletes looking to medal in an array of sports.

The Paralympics, founded by the late German-Jewish doctor Ludwig Guttman, are for athletes with physical disabilities. Some 4,500 athletes are set to compete in 539 events in the 16th Paralympics, which start Aug. 24.

Team Israel is sending 33 athletes to compete in 11 sports. But there are notable competitors as well to watch from the United States, Australia and Canada. Here’s our guide to some of the Jewish para-athletes to watch. 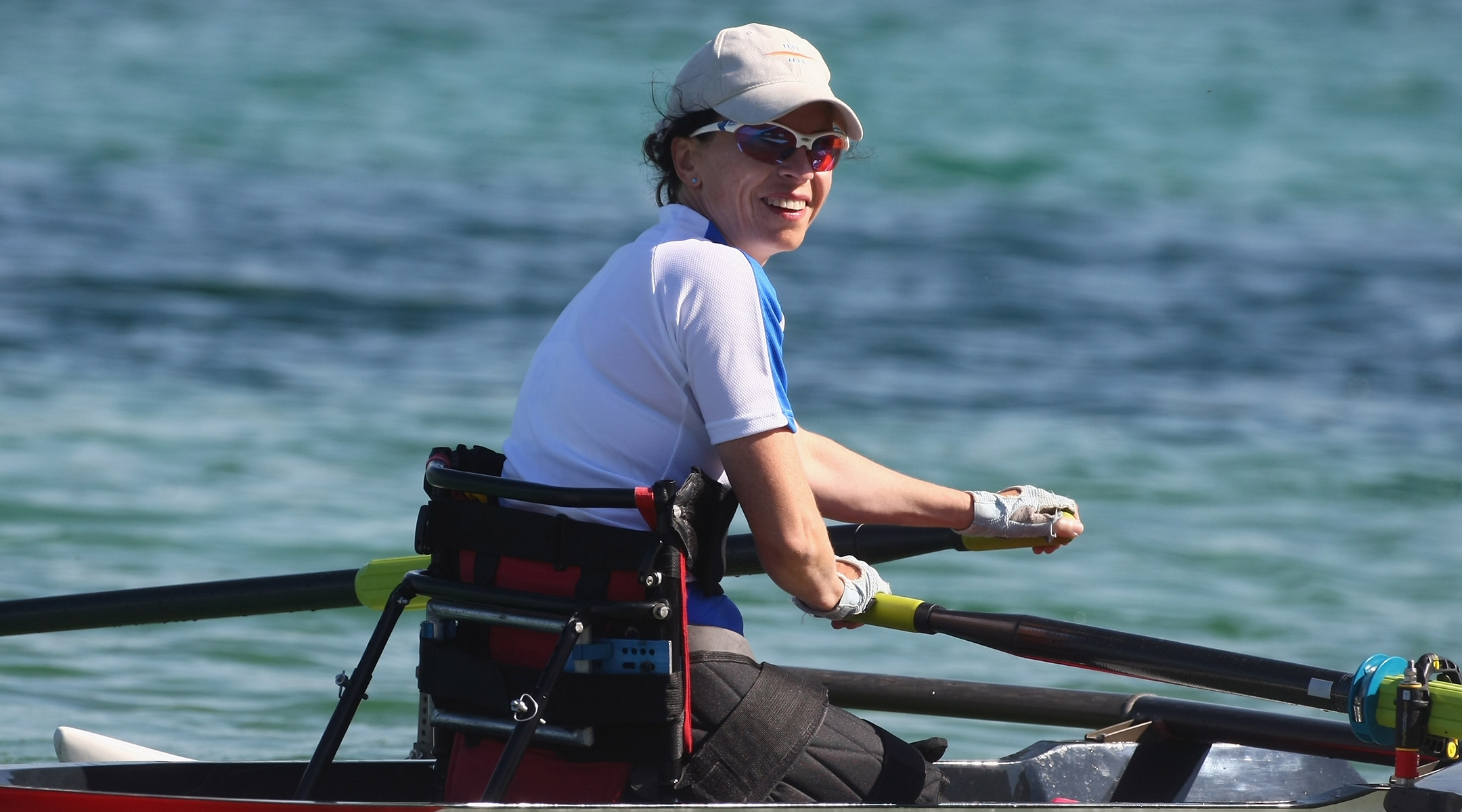 Pascale Bercovitch is a French-Israeli writer and film director — and four-time Paralympian. Born in France, Berkovitch was set to make aliyah to Israel when, at 17, she slipped at a train station and fell under an incoming train.

“I was totally in shock, I tried to call for help and I lay on the rails for 47 minutes on my own, it was such a long time,” Bercovitch told Reuters. “I didn’t know what would happen … was I going to survive? … I understood that all I was and all I knew was gone and I didn’t know how my new life would be, if I even had prospects of a new life.”

The accident resulted in the amputation of both her legs above the knee. The change would inform her life’s work. In 2000, Bercovitch made a documentary about the Israeli Paralympic swimming team in Sydney, “Three Hundredths of a Second.”

Eight years later, she became a Paralympian on her own, competing as a rower at age 40 in Beijing. In London in 2012, she was a hand-cyclist. In Rio 2016, she competed in kayak in paracanoe. And in Tokyo 2020, she will be competing in her fourth Paralympics — for the first time sticking to one sport for two straight games.

“I understood that there was no other choice than to fulfill your dreams,” she told the Jewish Telegraphic Agency in 2013. “Life can end in an instant. What’s important is to savor every moment. It didn’t matter how.” 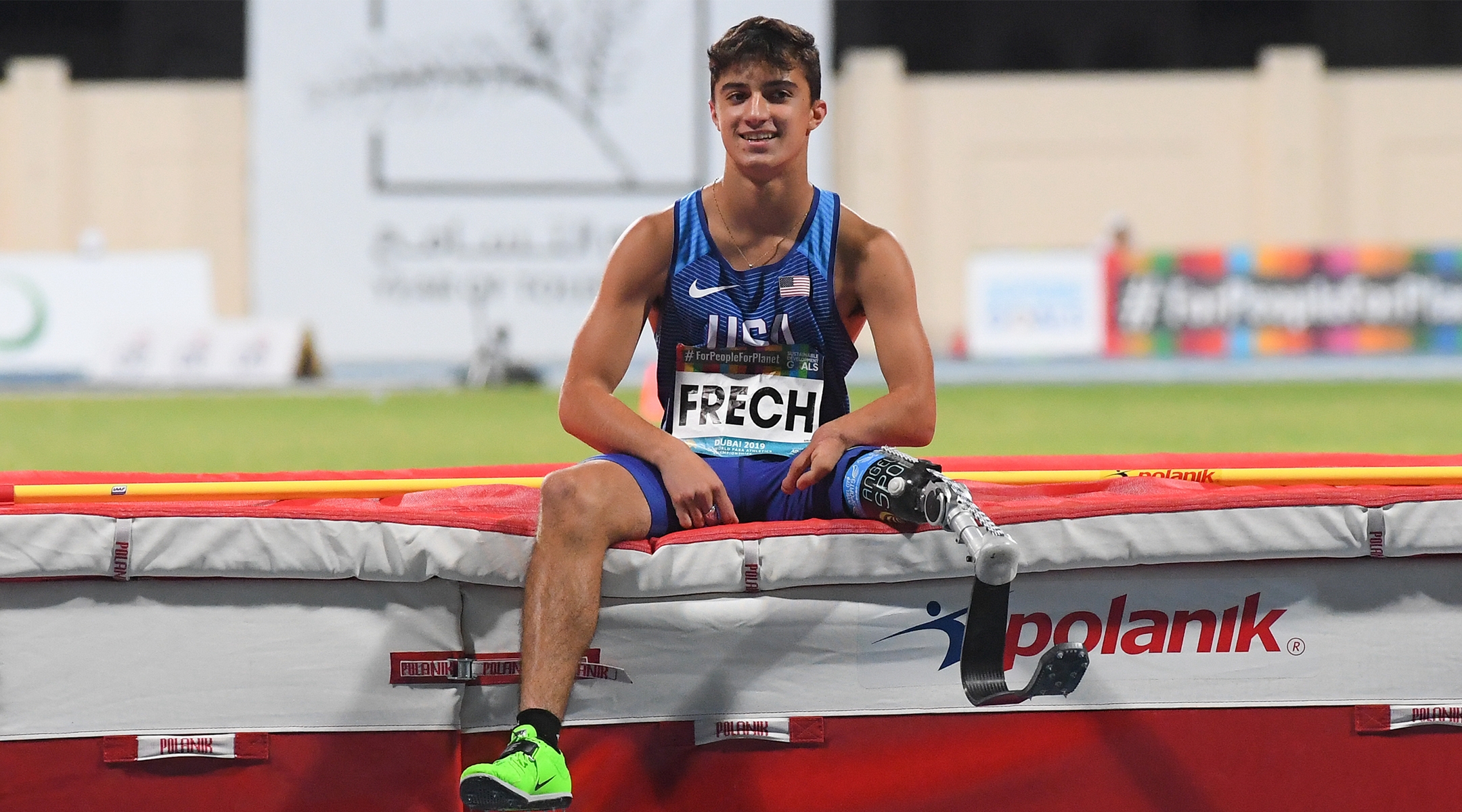 Ezra Frech is only 16 years old, but he’s already made a name for himself as a para-athlete. The Los Angeles resident will be one of the youngest athletes to represent Team USA this year, competing in the amputee classification for the high jump, long jump and the 100 meters.

Due to a congenital abnormality, Frech was born with only one finger on his left hand and missing his left knee and shinbone. At 2 he had surgery to remove the curved part of his leg, and had a toe attached to his left hand. By 9 he was advocating for adaptive sports on “Ellen,” and at the 2019 World Para Athletics Championships, at 14, he was the youngest competitor.

Frech’s mom, Bahar Soomekh, is a Persian-Jewish actress who fled Iran with her family in 1979. His dad, Clayton, left his job in 2013 to found Angel City Sports — to bring adaptive sports opportunities to Los Angeles.

“Everywhere you go, people don’t think you’re capable of what an able-bodied person can do,” Ezra Frech said earlier this year. “I’ll go to my high school track meet and they don’t expect the one-legged kid to go out and win the competition. When I was younger it got to me, but now it’s a motivation and excites me that I have a chance to prove people wrong, to shock them and turn some heads.”

Tahl Leibovitz was struggling with homelessness when he participated in a table tennis program for at-risk youth at the South Queens Boys and Girls Club in his hometown of New York City. In 1995, he learned his osteochondroma — overgrowth of cartilage and bone, characterized by sometimes-painful noncancerous bone tumors — qualified him for the Paralympic Games, and he made his debut the following year in Atlanta — where he won gold.

When not competing in para table tennis, Leibovitz works as a social worker and a coach at PingPod in New York. He launched a GoFundMe to help him pay for his travel to Tokyo.

“I have greatly diminished my work so that I am able to pursue my dream of once again standing on the medal stand with the Team USA flag raised!” he wrote.

Leibovitz, now 46, is competing in his sixth Paralympics and has picked up two bronze medals since his debut.

“I think this will be the best ever,” he said in a Team USA news release. “I am looking forward to an amazing experience with my teammates.” 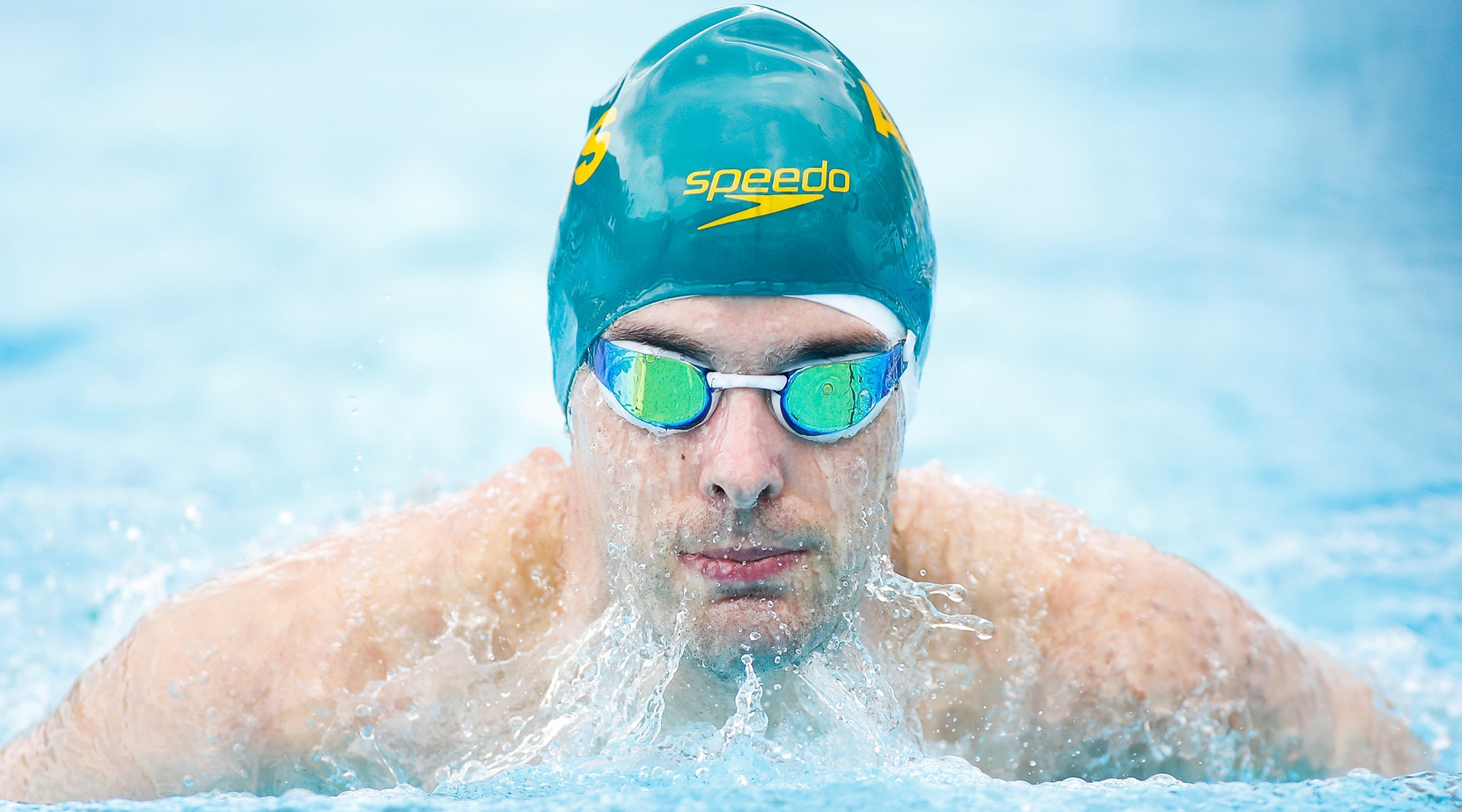 Matthew Levy is returning to compete in his fifth Paralympics. The Australian Jewish swimmer, 34, competes in the freestyle, butterfly and medley races.

Born premature at 25 weeks with cerebral palsy and vision impairment, Levy started swimming at 5 as part of his rehabilitation following surgeries. At 12, he realized he could swim competitively, and he made his Paralympic debut in Athens in 2004.

At the 2008 Beijing Games, Levy won his first medal — gold in the 4x100m medley. He won five more (a gold, a silver and three bronze) in London in 2012, and another bronze in 2016 in Rio de Janeiro. He’s looking to add to his medal count in Tokyo as the oldest member of the Australian Paralympic swimming team.

In 2014, Levy was awarded a Medal of the Order of Australia for his contributions to sport. And in 2017, Levy became the first person in its history to break a world record while competing in the Maccabiah Games, an international Jewish sports competition. 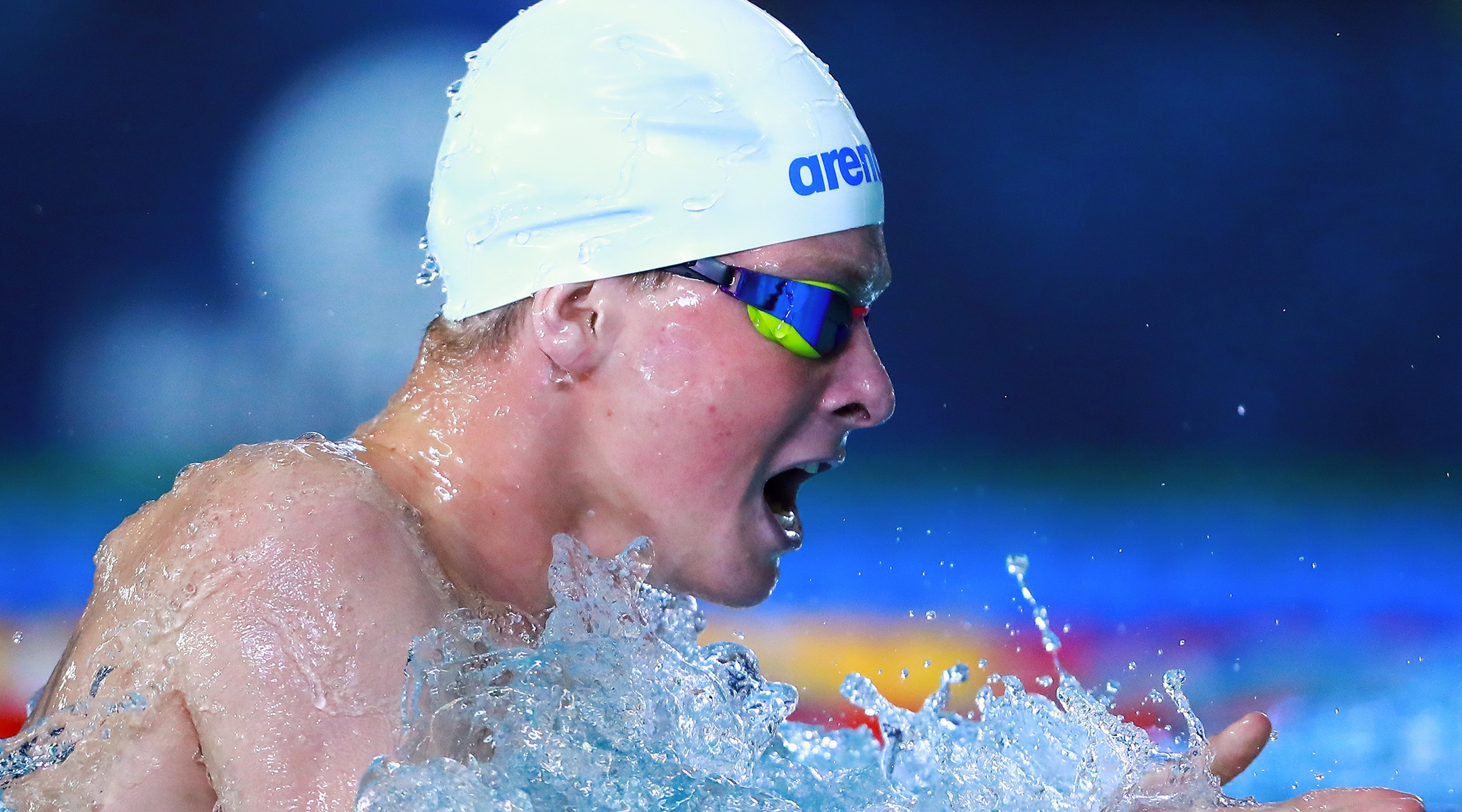 Ariel and Mark Malyar, 21-year-old twins, will be competing for Team Israel in Tokyo in their first Paralympics. Born with cerebral palsy, the brothers started swimming at age 5 as physical therapy.

“It’s great that the team has twin brothers in it. When we were younger there was a lot of competition between us, but now, not so much,” Mark Malyar said. 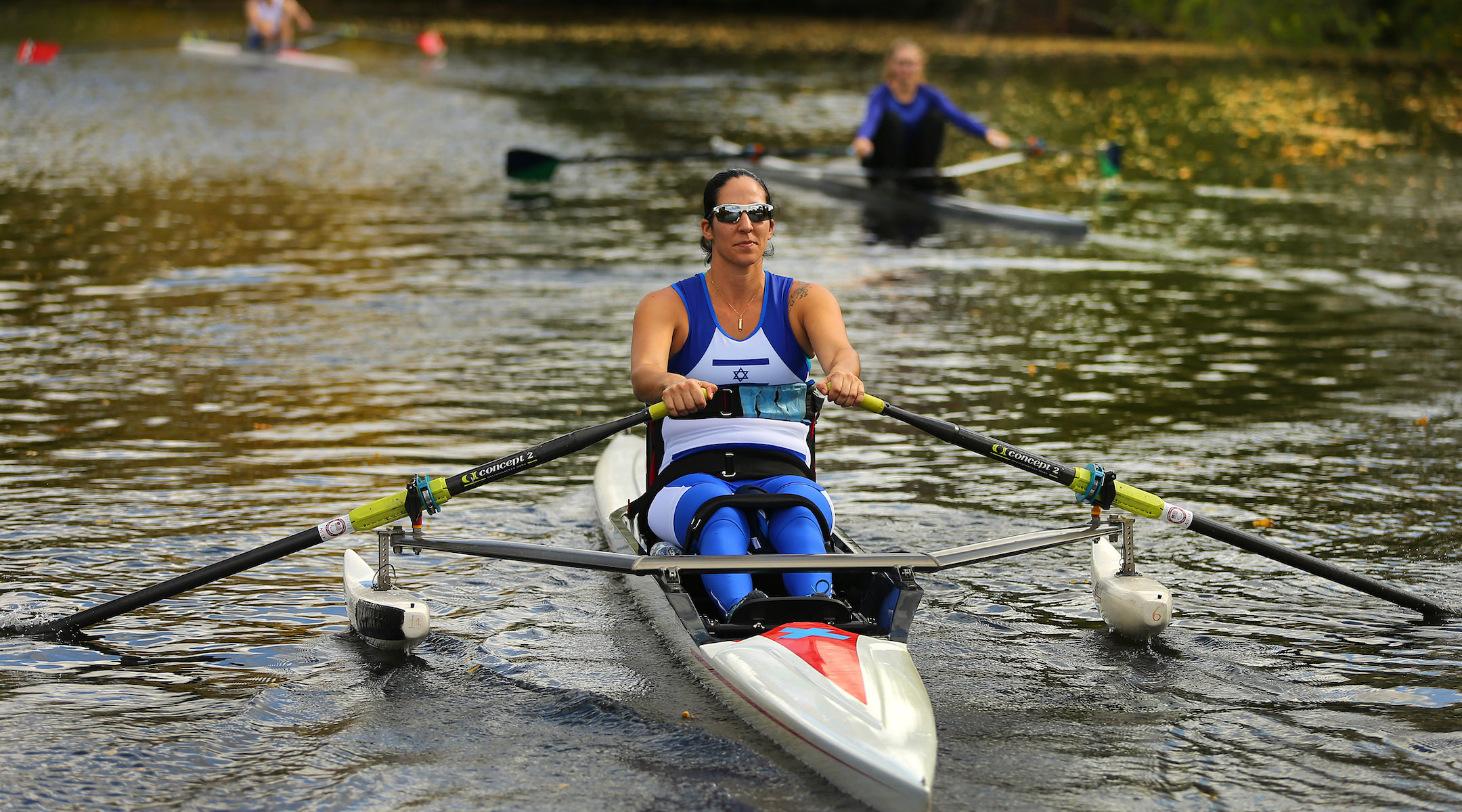 Samuel, 39, grew up playing basketball and was a member of the Israeli women’s national team. But in 2006, at 24, she suffered a spinal stroke and was paralyzed in her lower body. She started playing wheelchair basketball, then decided to try rowing to get to the Paralympic Games.

Her two biggest dreams were becoming a mother and winning an Olympic medal — and now she’s achieved both.

“If you want to be a very successful woman, you should have a woman by your side,” she once joked. With wife Limor Goldberg, she’s now a mom of two. And in Tokyo, at her third Paralympic Games, she’s going for gold.

Samuel was one of two flag bearers for Israel in the games’ opening ceremony Tuesday, along with boccia player Nadav Levi. 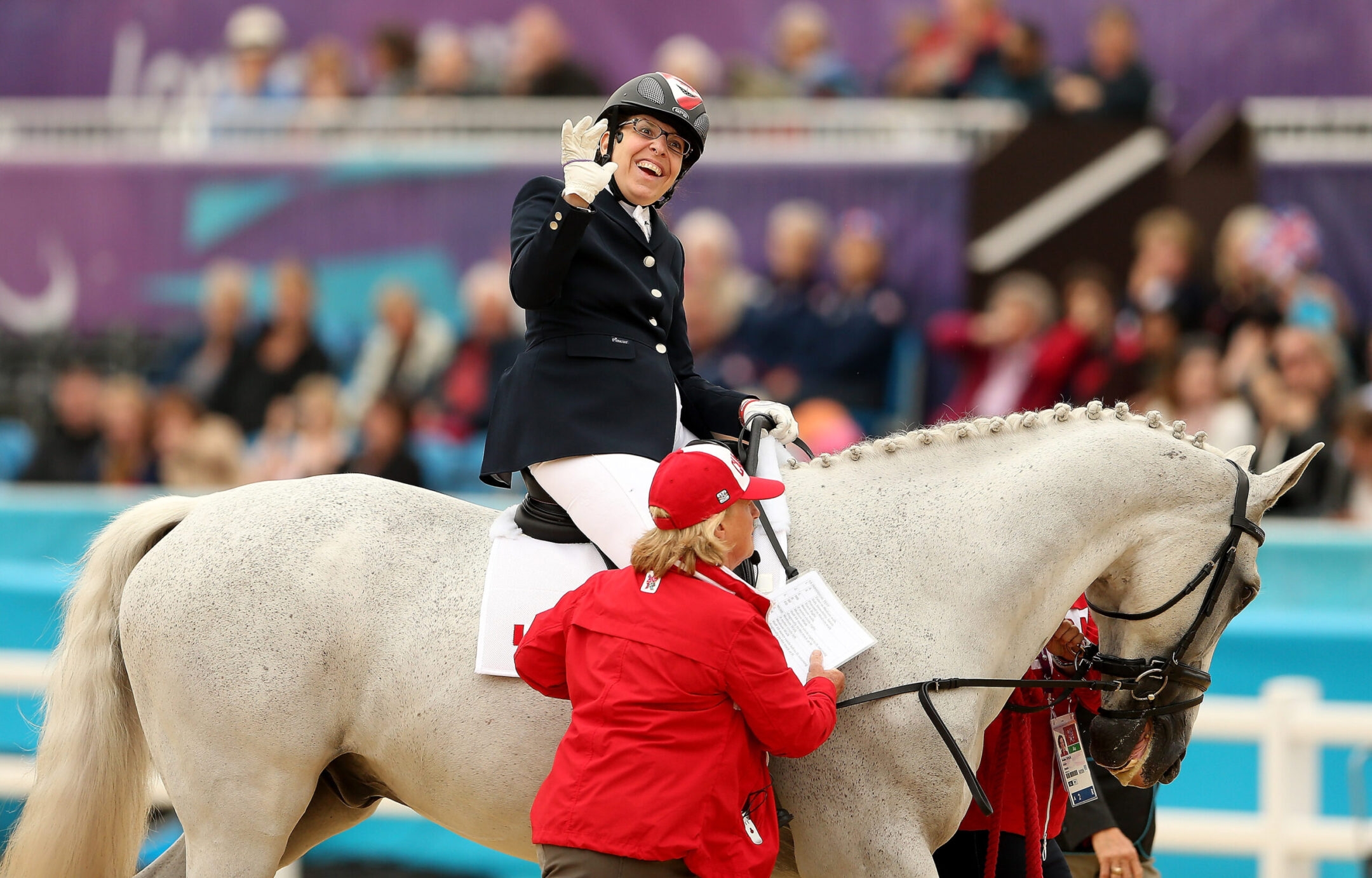 Jody Schloss grew up in Edmonton, Alberta, where she attended a Jewish day school, then rowed competitively at the University of British Columbia. (She has Jewish-Canadian pioneers on both sides of her family, according to a Canadian Jewish magazine.)

But at 23, she was in a car accident in California that killed her friend, put her in a five-month coma and ultimately left her unable to walk and with a speech disability. She had ridden horses since age 11 and turned to equestrian sports as part of her recovery.

Now 48, Schloss is competing in her second Paralympics, after an 11th-place showing in London in 2012. She’ll be riding a new horse after her longtime horse Rebus had to be treated with a medication that is banned from competition.

“Rebus was really angry that he wasn’t going,” Schloss told the Globe and Mail. “Lobin said he was excited, but I don’t think he knew how far he was going.” 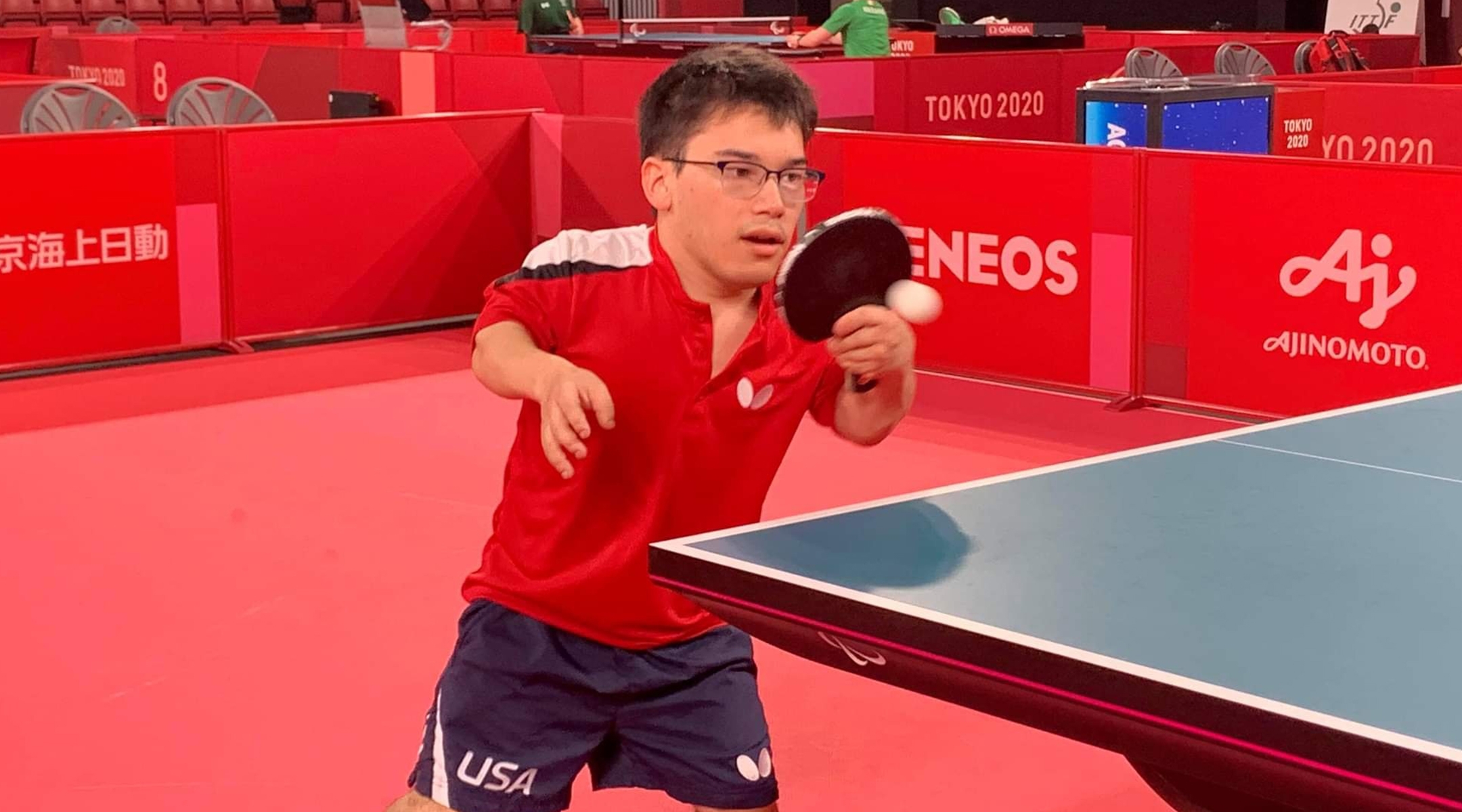 Ian Seidenfeld is a first-timer at the Paralympic Games. His dad, Mitch, is a table tennis Paralympian himself who competed in Barcelona in 1992, Atlanta in 1996 and in Beijing 2008, winning a total of four medals, including one gold. Mitch Seidenfeld has since transitioned into coaching, and served as a coach for Leibovitz, but now coaches his son.

Both Seidenfelds have Pseudoachondroplasia dwarfism, an inherited bone growth disorder. 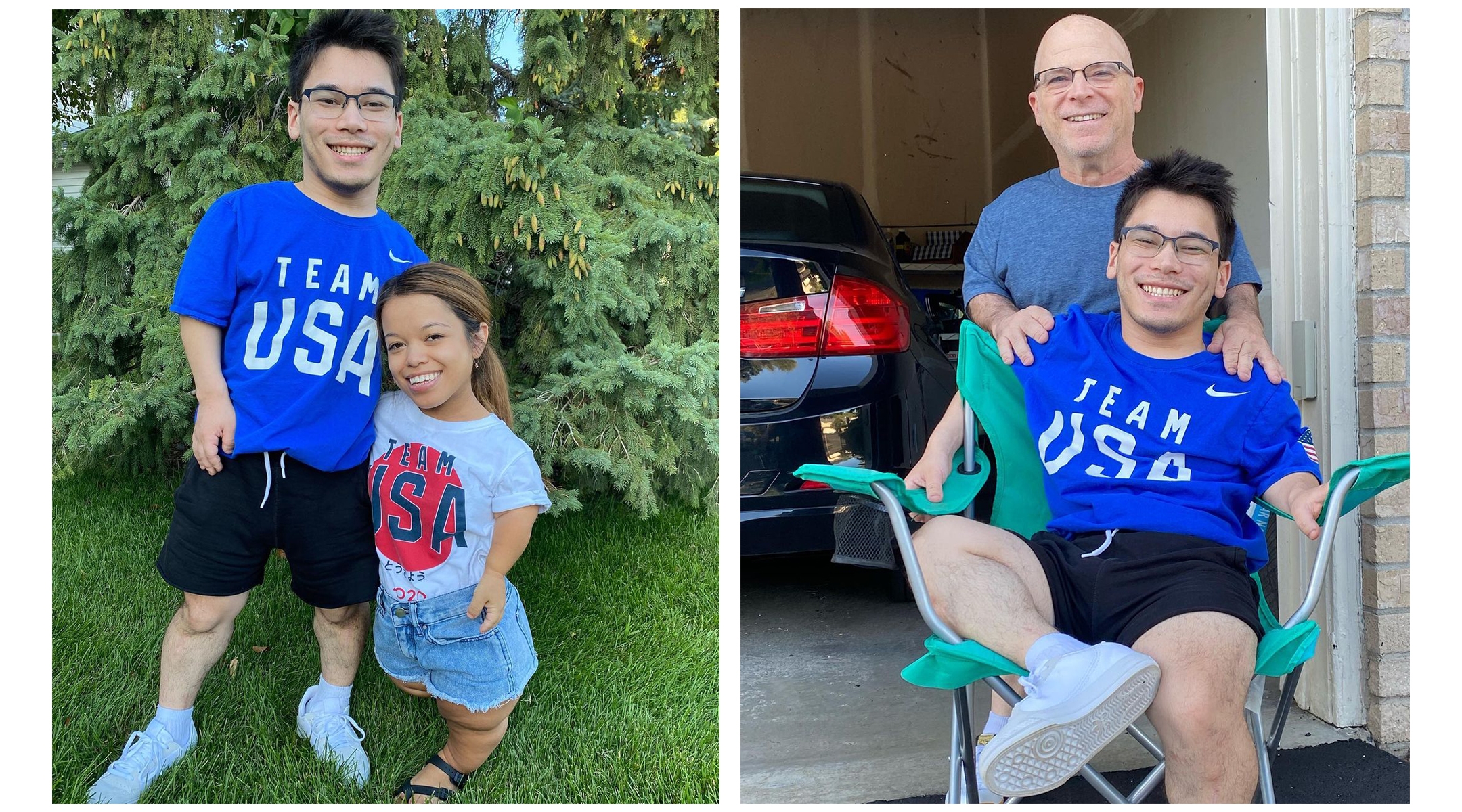 Left, Ian and his sister; right, Ian and dad Mitch. (via Emma Seidenfeld on Instagram)

Ian started playing when he was 6 years old and began competing at the international level when he was 12.

“Being compared to my dad, to be close to his level, would make me very happy,” the younger Seidenfeld told the Minneapolis Star-Tribune, his hometown newspaper. “The Paralympics has always been a goal, and my dad has always been very supportive of me. But I didn’t think it would happen this soon.”

The 20-year-old Asian-Jewish athlete continued: “I wasn’t ready in 2020. I think I’m much more ready now. I never like to say I’m confident, but I’m going to do my best.” 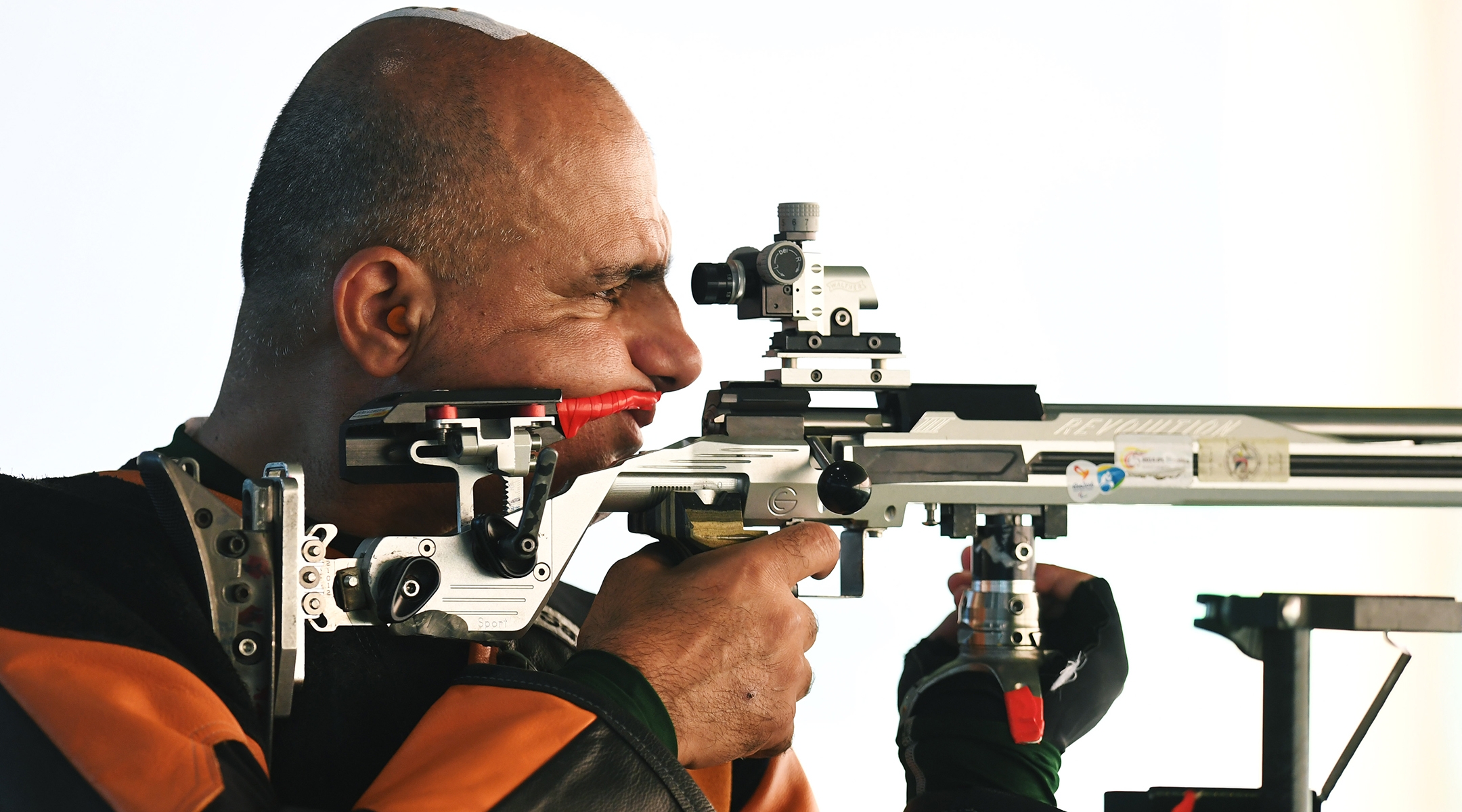 Doron Shaziri is set to compete in his eighth consecutive Paralympic Games — he’s won medals at six of them. The 54-year-old Israel marksman is aiming for his first gold.

Shaziri lost his leg at 19 when he stepped on a mine while on patrol in Lebanon in 1987 with the Israeli army, serving as a sniper. While at Beit Halochem in Tel Aviv, a rehabilitation center for disabled veterans, he discovered a passion for sport shooting.

“Shooting is a very mental sport and if you succeed it means you are mentally strong. That is the skill I work on most because I already have the technical skills,” Shaziri told Israeli media. “Unlike other sports, in shooting you should keep your adrenaline down because a high pulse is bad for stability. It’s not like running faster or hitting stronger. You have to go calmer.”

When not competing in Paralympic shooting, Sharizi builds custom wheelchairs for athletes. 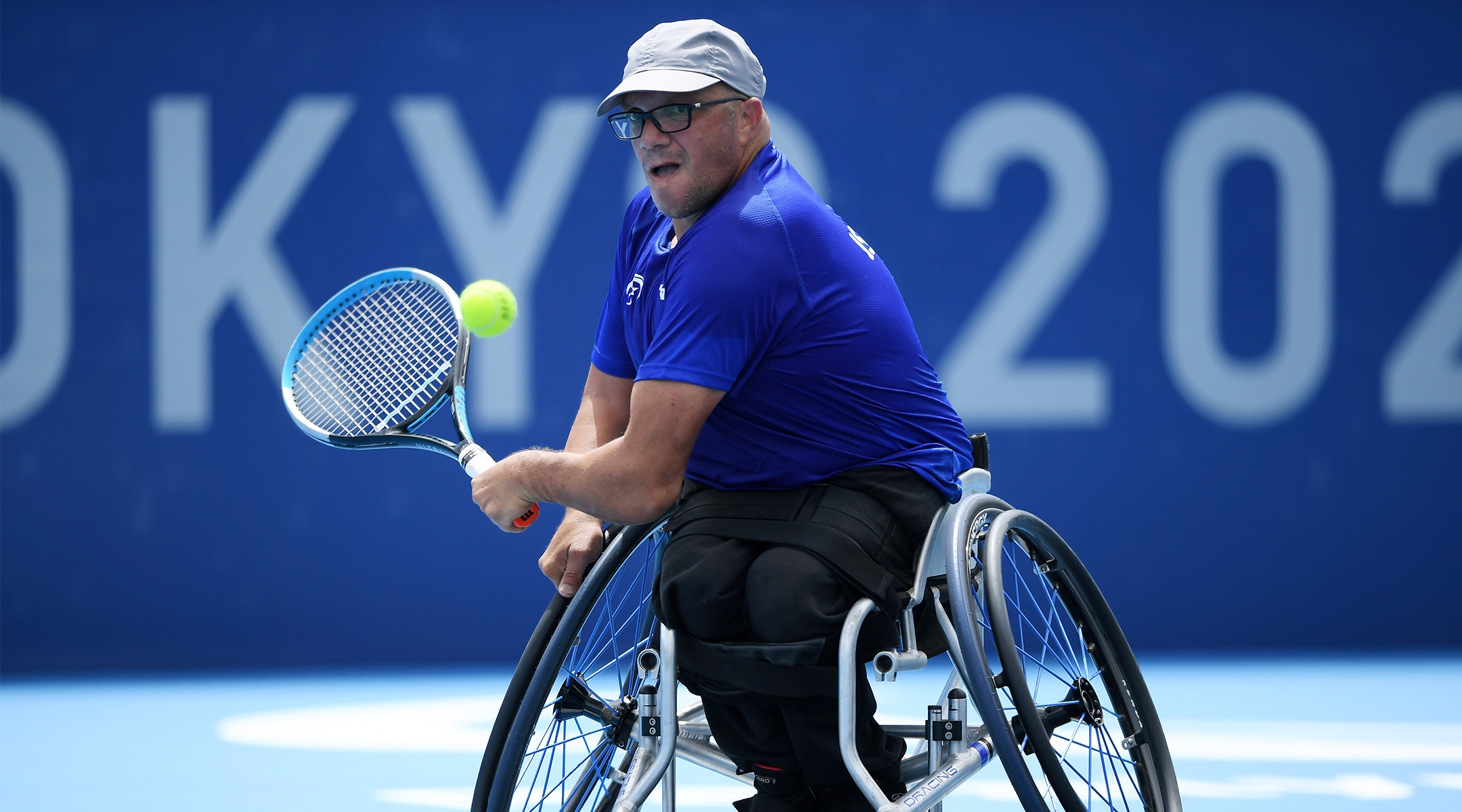 Shraga Weinberg, considered one of the best wheelchair tennis players in the world, is set to compete in his fifth Paralympics, aiming for his third medal. He won silver in the mixed doubles in Beijing in 2008 and bronze in the quad doubles in London in 2012. At Rio in 2016, he served as the flag bearer for Team Israel.

Weinberg, 55, was born with a genetic disorder called Osteogenesis imperfecta.