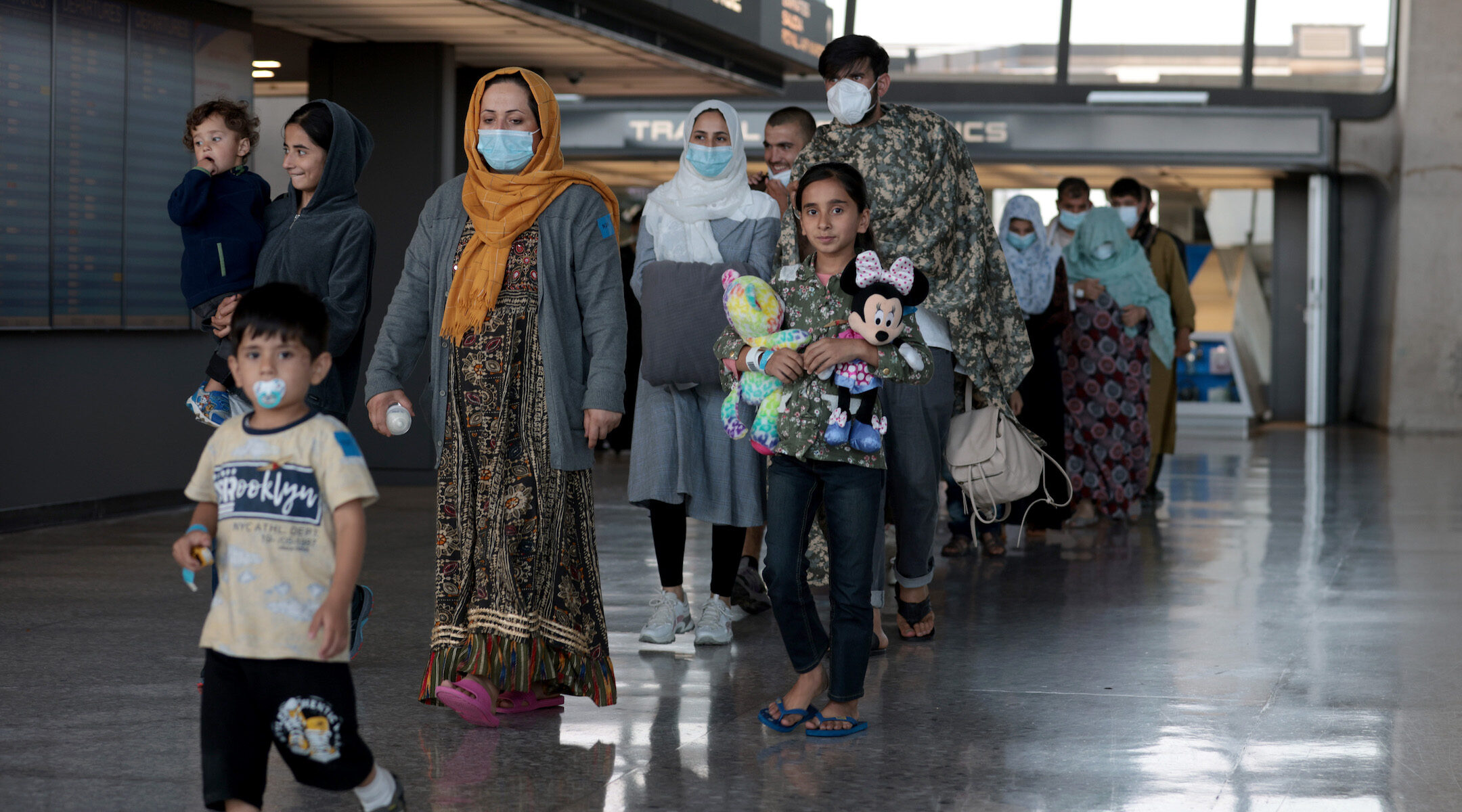 A family evacuated from Afghanistan is led through the arrival terminal at Dulles International Airport in the Washington area to board a bus that will take them to a refugee processing center, Aug. 25, 2021. (Anna Moneymaker/Getty Images)
Advertisement

(JTA) — Jewish communities around the world are reactivating their refugee-support networks as they prepare to help resettle Afghans who have fled the Taliban takeover of their country.

In recent weeks, tens of thousands of Afghans have been airlifted from Kabul after the Taliban retook control of Afghanistan with the U.S.  exit from the country after 20 years. Many will spend time in another country while they wait to be admitted to the United States, but some are already arriving – and needing support as they adapt to a sudden relocation and a new country.

The importance of welcoming strangers is so deeply rooted in Jewish tradition and experience that immigration issues have long enjoyed a bipartisan consensus in Jewish communities even amid deep polarization on other topics. Many cities have social services agencies that began to support Jewish immigrants and now work with new arrivals of all backgrounds, often coordinating with HIAS, formerly the Hebrew Immigrant Aid Society, to identify refugees and meet their needs.

Those agencies — and the Jewish communities that support them — are now scrambling to prepare for a wave of new arrivals as the United States wages an around-the-clock effort to remove as many people as possible who supported the U.S. military mission in advance of an Aug. 31 withdrawal deadline.

In California, Jewish Family Services of Silicon Valley and Jewish Family & Community Services East Bay are preparing to support 130 families, according to J., the Jewish News of Northern California. The East Bay organization has been helping Afghans resettle for years, but has never tried to support so many families so quickly, the newspaper reported.

“This whole thing has been just super expedited,” the group’s senior director of development, Holly Taines White, told J. “Doing this work is deeply rooted in our history and our values.”

White noted that the new arrivals hold what’s known as special immigrant visas, or SIVs, because they collaborated with the United States, meaning that many have experienced trauma throughout the upheaval in their country.

In Southern California, Jewish Family Service of San Diego told the Times of San Diego it has resettled 74 Afghans since Aug. 6 and is preparing for an untold number of additional arrivals.

“Most cases are assigned to JFS with little more than 24 hours’ notice before arrival, though all have prior connections — whether family or friends — to the San Diego region,” Etleva Bejko, the director of refugee and immigration services for the nonprofit organization, told the paper.

As of last week, Jewish Community and Family Services of Pittsburgh had already learned that it would resettle two Afghan families, including one that arrived on a tourist visa and now will be able to stay in the country. But it anticipated that the number would rise.

“We’re planning as if we’re going to receive more than a handful of families,” the local group’s director of refugee and immigration services told the Pittsburgh Jewish Chronicle. “We won’t see hundreds of people arriving at the same time, but this is going to be a slow process of refugees arriving for a long time.”

In Tampa, Florida, Gulf Coast Jewish Family and Community Services has resettled six Afghan families and expects four more next week, according to the Tampa Bay Times. The group pays for housing until refugees can begin working, but a representative told the newspaper that the tight housing market has made it challenging to find apartments for the new arrivals.

Jewish Social Services, the only refugee resettlement agency in Madison, Wisconsin, has resettled 61 refugees from Afghanistan since 2017, including 14 in the past three months. It’s expecting an influx now, the group told WMTV, a local TV station.

“We’re reaching out to potential landlords, we’re reaching out to hotel managers to say this is what we expect to happen, we don’t know when it’s going to happen, we don’t know for how long it’s going to be happening for, but as our partner, we would like you to know about it,” the group’s executive director told the TV station.

Jewish social services groups in Kansas City, Delaware and Seattle have all told local news organizations that they are standing by to support refugees who arrive in their areas.

Efforts to support Afghan refugees span the globe. In England, British Jews are drawing on their collective memory of the Kindertransport, which brought children from Germany to England during the Holocaust, as they gather money and goods for refugees who arrive there. The Bushey United Synagogue in Hertfordshire told the local Jewish News it had experienced an “overwhelming” response after asking for donations to support 30 Afghan families in the area.

We “recognize that our grandparents came into this country as refugees and all we’re trying to do is pay it back forward,” the synagogue’s rabbi told the BBC.