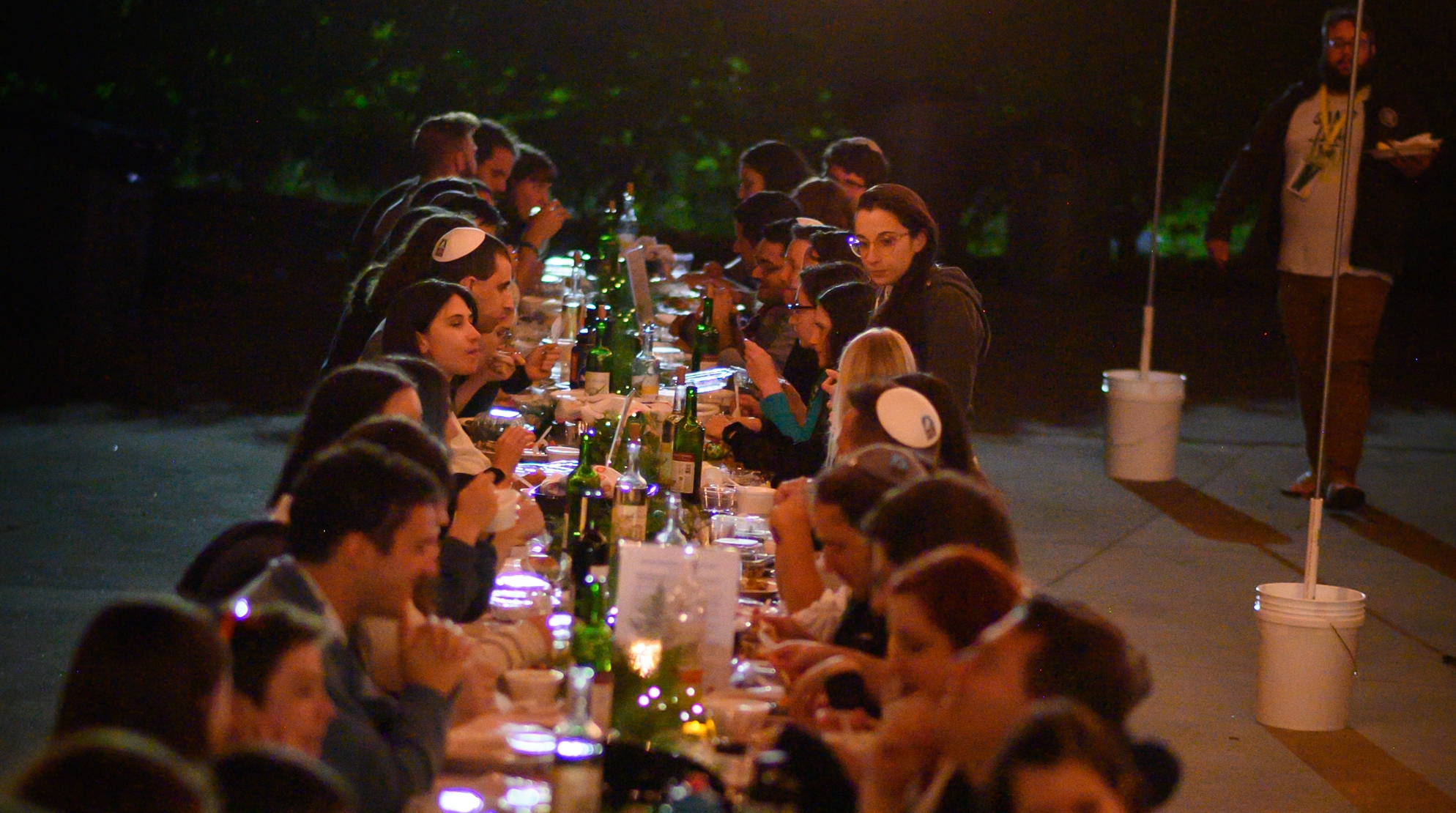 Shabbat dinner was one of the highlights of this month's Camp Nai Nai Nai, an adult summer camp experience. (Yoav Magid)
Advertisement

Under a perfectly blue sky, the campers gathered around Lillian Feldman-Hill as she showed them how to create a combustible mixture using water, soap and butane. Then she demonstrated how to blow huge fireballs with just cornstarch and a blowtorch.

Held on Labor Day weekend just before Rosh Hashanah, the camp drew some 100 adults in their 20s and 30s from throughout North America to have fun, make new friends and do Jewish.

The camp, whose session over the holiday weekend marked its first in-person experience since the onset of the pandemic, was born in 2017 of an effort to find ways to get young adults more involved in Jewish community. The camp targets those in the age range with the lowest levels of affiliation with Jewish community life.

Camp Nai Nai Nai is a program of Moishe House, a leading organization in engaging young Jews around peer-led programs, including some of whom live in subsidized co-living spaces. Unlike the events that Moishe House offers year round, Camp Nai Nai Nai provides an escape from the mundane and a chance to have fun like a kid again.

“Camp Nai Nai Nai represents a unique part of the year,” said Ira Markowitz, who was participating at camp for his third year. “It’s a place where the ordinary limitations of life are effectively suspended. You have more time to focus on the stuff you want to do as opposed to the stuff you have to do.”

This session, held Sept. 3-5 at a lakeside retreat in rural Waynesboro, Pennsylvania, featured the typical camp activities like a mud obstacle course, slip ’n’ slide kickball, zip lines, color war and sing-alongs, as well as more adult offerings such as alcohol, fire play and a workshop on being kinky. Camp Nai Nai Nai in early September 2021 drew some 100 adults in their 20s and 30s to have fun, make new friends and do Jewish. (Yoav Magid)

There were also three varieties of Shabbat services and plenty of Shabbat-friendly play shops, such as Israeli dancing and a session called “Funny They Don’t Look Jewish,” which focused on Jewish characters in superhero comics.

The campers came from as far as Texas and Canada. Some were Moishe House residents; others were regulars at Moishe House events. But plenty are not active in their Jewish communities back home and were looking for an opportunity to connect with Jewish peers in a fun, non-stressful environment.

“It’s nice to be around something familiar and being able to connect with people who share the same kind of identity with you,” said Joel Ravitz, 32, who traveled to the camp from New Jersey with his younger brother, Lloyd.

The campers came from a variety of races, genders, sexual identities and Jewish backgrounds.

“There aren’t obstacles here to being yourself and exploring who you are,” said Cleo Daniels, a nonbinary Mizrahi person of color with disabilities. “It’s so accessible for anyone to tap into anything and to be supported. Nobody is asking me to be anything less than authentic.

“I feel the wider Jewish world needs to learn from here about creating affordable and engaging ways of uplifting our inner child and making it a package for all sorts of people. There’s no agenda here. There’s no fundraising. You can come with whatever interests you have.”

Due to COVID-19, the camp had to make some changes: There were 100 campers rather than the usual 300, and the retreat was moved to Labor Day weekend from its traditional time on Memorial Day weekend.

All campers and counselors had to be vaccinated against COVID and present a negative PCR test upon arrival. The camp also ended a day earlier than normal so campers could return home before Rosh Hashanah. Many campers expressed disappointment at the abbreviated session — they wanted to stay longer.

On the final morning, the campers participated in a “Survivor”-themed color war in which they had to complete an obstacle course, build a raft to cross the swimming pool and take on multiple rounds of challenges that ranged from freestyle rapping to yoga. The points were made up and the winner didn’t matter: The idea was to cement new friendships and, as with regular Jewish summer camp, leave the campers with a positive experience and lifelong memories.

“What we’re doing here at camp is pretty special: It’s three or four days, but people develop really deep connections with one another and have a very special time here,” said Ben Suster, 27, a third-year counselor and former Moishe House resident.

Camp Nai Nai Nai is planning additional camp experiences in 2022 on the East and West coasts, as well as in the Midwest.

The camp has been hugely popular since its inception. This year, spots filled up within a week of the dates being announced. There was no camp in 2020 due to the coronavirus, though Nai Nai Nai did hold several online activities. But it was clear campers were aching for in-person contact.

“We know people are just itching to get together, and with precautions we can do it all safely,” said Lisa Klig, the camp director. “It’s a very valuable experience for everyone involved.”