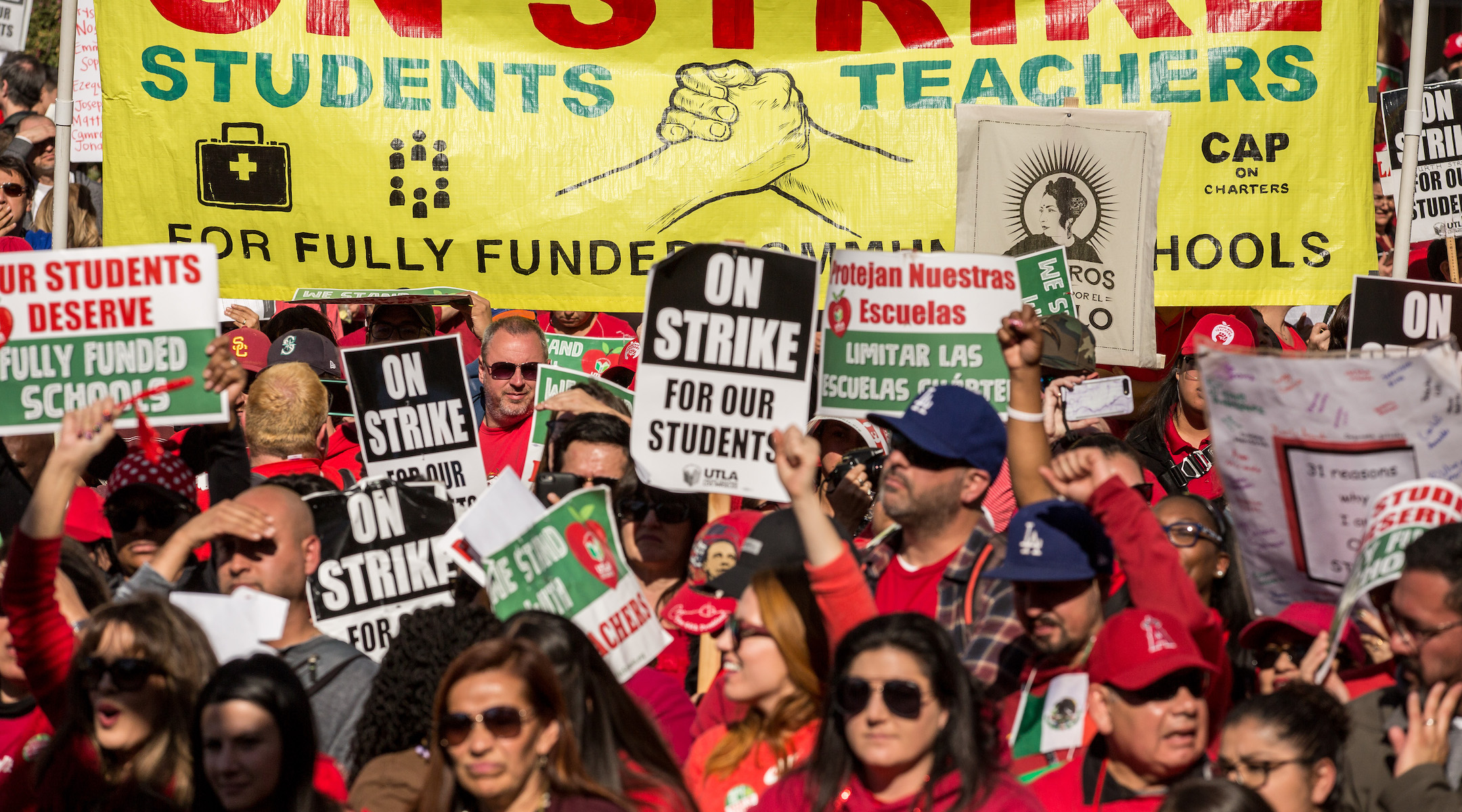 Members and supporters of the United Teachers of Los Angeles union wave and cheer in a downtown Los Angeles park at the end of a strike, Jan. 22, 2019. In September 2021, the union voted to indefinitely delay a controversial resolution to back the Boycott, Divestment and Sanctions movement targeting Israel. (Scott Heins/Getty Images)
Advertisement

For months, the United Teachers of Los Angeles, which has approximately 30,000 members, has been debating a motion to support BDS, or the movement to boycott, divest from and sanction Israel. The motion was first raised in the wake of the conflict between Israel and Hamas in Gaza in May. It has since been adopted by several local chapters of the union.

The resolution calls for the union to “endorse the international campaign for boycotts, divestment and sanctions against apartheid in Israel,” according to a copy of the resolution’s text in the publication Left Voice. It also declares the union’s “solidarity with the Palestinian people because of the 3.8 billion dollars annually that the US government gives to Israel, thus directly using our tax dollars to fund apartheid and war crimes.”

Los Angeles’ union was far from alone in taking up the BDS issue this year. Teachers unions in San Francisco and Seattle approved BDS resolutions, while the National Education Association, the largest national teachers group, voted down one motion in support of Palestinians and critical of Israel. (The other major national union, the American Federation of Teachers, has never taken up BDS, which its president opposes, on a national scale.)

Related: “Shut up and teach? Why labor unions like mine weigh in on the Israeli-Palestinian conflict“

On Thursday, the Los Angeles teachers’ union effectively voted not to vote on BDS. (The city council in Burlington, Vermont, did the same thing earlier this month.) The union’s House of Representatives approved a motion, put forward by the union’s board, “that the motions on Israel/Palestine from the May 2021 Area meetings be postponed indefinitely.” The motion to postpone said that BDS was “an extremely divisive issue that would seriously damage union unity at a time when we need solidarity in our coming contractual battles.”

Because the meeting, held remotely via Zoom, focused on the motion to postpone, union members never actually debated the BDS resolution itself. Instead, the debate over whether to postpone the vote served as a proxy for the debate over whether to boycott Israel, and members echoed arguments that have become familiar in BDS debates across the country.

Those who supported holding a vote on BDS depicted supporting Palestinian rights, and opposing Israel, as a moral imperative.

“I think there’s a feeling in general that we’re taking sides in a war, but as time goes on people are realizing this is an oppressor vs. oppressed situation,” said union member David Feldman. Referring to Israel, he said, “This is a Jim Crow or apartheid situation. What makes this situation one in which we have to take a stand is that American taxpayers fund what goes on there directly.”

Those who opposed holding a vote said wading into the issue would only damage the union or even open it up to claims of antisemitism.

“I have never seen a more divisive motion,” said union member John Perez. “This motion would be used by our enemies and they will hit us over our heads until doomsday.”

More than once, union president Cecily Myart-Cruz urged members to remain calm while debating the issue, or to at least not interrupt each other.

“We know that this is a heated conversation and people are going to speak,” she said. “So I would just ask that we don’t unmute ourselves to give your comment.”