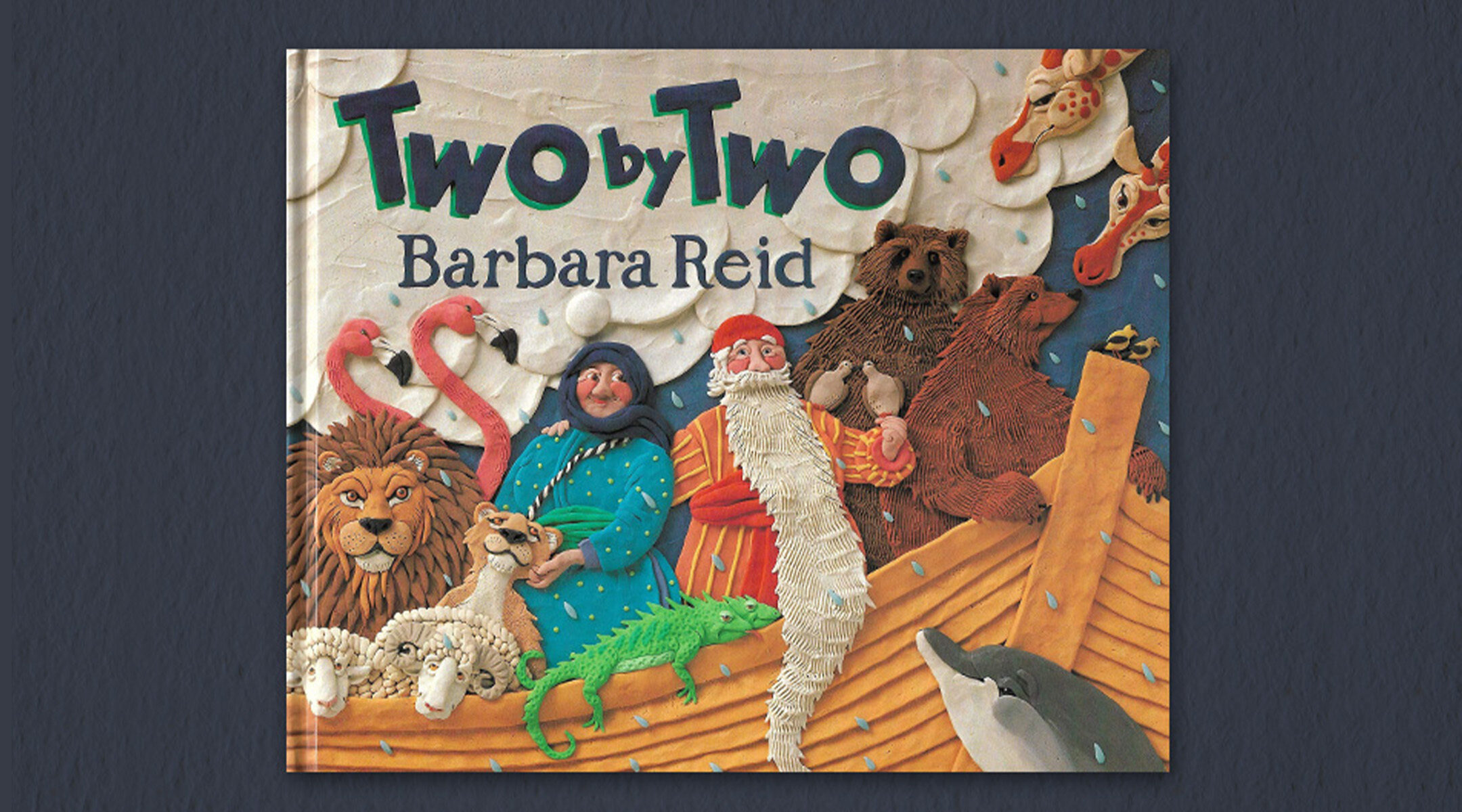 "Two By Two" by Barbara Reid is a whimsical version of the Noah's Ark story. (Scholastic)
Advertisement

(New York Jewish Week via JTA) — Our oldest son is named Noah, and as a result we collected a lot of children’s books based on the Bible story (which will be read in synagogues this Shabbat). On its face, the story of Noah and the flood, with its parade of animals, is just right for kids. In truth, it’s a weird and woolly story that gets weirder and woolier the more you think about it. If bedtime reading was supposed to be relaxing, we picked the wrong story.

Every kids’ version of a Bible story is a “midrash,” which is a Jewish method for explaining and expanding on the Hebrew canon. The closest English word is “homily,” but midrash is really literary analysis, except written in the form of parables, legal arguments and fan fiction. A midrash can fill in the gaps of the typically terse Torah. The famous bit about Abraham smashing his father’s idols? That’s a midrash, made up by the rabbis to explain how the future patriarch of the Jewish people came to reject his father’s bad example.

There is a formal literature of midrash, but the spirit of the enterprise lives on whenever people use the Bible as inspiration for novels, films, comic books – and children’s books.

Midrash is also what you leave out of a story. When its comes to Noah. there’s an awful lot an author or parent might prefer to leave out. First of all, it presupposes an exasperated God who, terrifyingly, decides to wipe out nearly all of humanity because of the sinful ways of the people He created. A kid just might ask exactly what all those sinners did to deserve annihilation.

And while Noah, his family and the animals survive their 40-day ordeal, and God makes a rainbow as a sign that he’ll never to do it again, you can’t help but think about the 41st day. In his new book, “The JPS Jewish Heritage Torah Commentary,” Rabbi Eli L. Garfinkel notes that when the Noah story is told to children, the tale is given “an age-appropriate cheery patina, depicting the ark and the animals with bright, primary colors. The actual biblical text, however, is anything but colorful and happy. It is a dark, dismal story, a tale of people who are left to mourn a lost and destroyed world.”

Kids’ books about Noah tend to glide past the sticky theology, but some deal with it. “Two by Two” by Barbara Reid, with amazing illustrations fashioned out of modeling clay, is a whimsical, pun-filled poem (“Space within was so restricted/Even the boas felt constricted”). But it opens by acknowledging that people “turned to evil ways” and with God declaring “Let them drown!”

Bright children might also wonder — just as the classic midrash does — why Noah doesn’t do more to save people outside of his immediate family. The rabbis solve this by suggesting that he took so long to build the ark – perhaps 52 or 70 years – because he wanted to give his fellow humans time to see what he was up to and repent. But there’s also Bart Simpson’s midrash, which comes to the opposite conclusion: Acting out the story, Bart has the people cry out, “Noah, Noah, save us!” To which Bart, as Noah, replies tersely, “No.”

The Little Golden Books “Noah’s Ark” deals at some length (for a kid’s book) with Noah’s unease and his neighbors’ contempt. After God tells Noah he is going to “Wash away the evil in the world,” Noah is next seen telling his wife and kids, “We must obey God!” You are left to imagine, as any good midrash writer would, the heated family discussion that came before this declaration. Any parent who tells his kid “We must obey God!” has probably lost the argument.

For those who don’t want story time to become a seminar on theodicy, there are books, like “On Noah’s Ark” by Jan Brett, that leave God out of the story entirely. Instead, Brett’s version begins with, “Grandpa Noah says that the rains are coming.” No God, no bad guys. Of course, this only ends up shifting the conversation from “Must we obey God?” to “Must we obey Grandpa?”

A lot of the children’s books instead treat Noah as an ecological cautionary tale. That’s a Jewish tradition too, based in part on the verses: “The earth became corrupt before God.” (Genesis 6:11) A literal reading suggests that humankind’s evil had infected the earth itself – a potent metaphor and prophecy for environmentalists. And Noah, as the savior of all life on earth, can be portrayed as the very first eco-warrior. In a science book for kids, “Planet Ark: Preserving Earth’s Biodiversity,” author Adrienne Mason takes the ark as a metaphor for the earth itself: “In many ways, our beautiful blue home – planet Earth – is like an ark sailing through the universe,” she writes. “Thankfully, there are many modern-day Noahs – groups and individuals – who are working hard to preserve Earth’s biodiversity.”

One of our favorite versions of the Noah story, “Aardvarks, Disembark!” by Ann Jonas, is essentially a roll call of the animal pairs as they leave the ark. The kids loved hearing us recite the odd names – aurochs, gerenuks, lechwes, peludos, urumutums – and we adults understood that a lot of these animals were extinct or endangered.

Parents know their kids best, and its up to them to decide what sort of lessons they’d like to impart and what books best help them do that. Is Noah about the wages of sin? The possibility for forgiveness and a fresh start? The need to protect a fragile planet? If your kid doesn’t ask you what they did with all the poop on the ark, you’re missing out an a peak parenting moment.

My Noah is all grown up, and the children’s books have been set aside in the hope that we’ll one day read them to grandkids. Given the headlines, I suspect that the Noah story and its themes — a reckless populace, a degraded environment, a retributive flood (or fire, or pandemic) — are only going to become more relevant. Bedtime with grandpa is going to be a bummer.