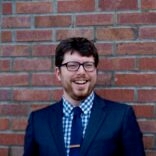 (JTA) — I grew up Jewish in Alaska. The Jewish community in Anchorage, the city where I grew up, did things their own Jewish way. It was the only kind of Judaism that I knew.

For example, I used to think that everyone had their bar or bat mitzvah during the summer, because in Alaska, anyway, that was the best time to invite relatives.

Later, of course, I encountered many forms of Judaism. I have lived in Jerusalem. I have worshipped and worked at Jewish communities too small for a synagogue and congregations with over 1,500 families. All these experiences convinced me to become a rabbi. But I would have never predicted that, after ordination at Hebrew Union College- Jewish Institute of Religion in 2017, I would come back to my hometown as a rabbi.

I now officiate at b’nai mitzvah in the very sanctuary where I received mine. As a lover of nature and someone who has grown to appreciate Judaism in smaller cities and towns, I feel Alaska is a great place to be Jewish. While some may think it’s distant and cold, I have always found it cozy and welcoming.

Except when it isn’t.

This past year, as our state officials and politicians decide on how to best fight COVID, we saw an uptick of people comparing health mandates to the Holocaust. During a contentious Assembly meeting on mandating masks in Anchorage, protesters against mask mandates started wearing yellow stars of David, appropriating the Holocaust and the Nazis’ genocide against the Jewish people. Anchorage’s mayor at one point even exclaimed that the Alaskan Jewish community would support these protesters’ message.

A small community of some 4,500 people, far from the large centers of Jewish life, might have been expected to let this go. Or perhaps grumble among ourselves and let “outsiders” object for us.

Instead, at a hearing on masks in September, one of my congregants, State Assemblyman Forrest Dunbar, read a letter I had written. “It was heart-wrenching for me when I noticed individuals were wearing yellow Stars of David, mimicking my Jewish ancestors who perished during the Holocaust,” he read, quoting me. “For myself and most Jews, seeing the yellow Star of David on someone’s chest elicits the same feeling as seeing a swastika on a flag or the SS insignia on a uniform. I believe it is a constitutional right to protest for your values. But I request that you do not use symbols that diminish the 6 million Jews who were murdered during the Holocaust.”

The mayor apologized the next day, thanks to the work of a confident Jewish community that showed him how hurtful his remarks were for Alaskan Jews.

Our confidence comes with deep roots. In 1900, a community of 60 Jews celebrated Rosh Hashanah in Nome using a Torah brought by Sam Bayles, a Latvian immigrant who sought his fortune in the Alaska Gold Rush. The Bayles Torah stayed in Nome until after World War I, when it was moved slightly south (537 miles) to my congregation, Congregation Beth Sholom in Anchorage, where it remains today alongside other Torah scrolls with their own uniquely Alaskan histories.

Their stories are much the same as the story of how Jews came to Alaska. Whether through a pioneering spirit, a sense of amazement or a need to connect with tradition in the farthest North, Jews have been coming to Alaska since before it was even a state.

I often feel that Jews in the lower 48 consider Judaism in Alaska to be diminished due to its isolation and its limited population. We certainly have our own unique problems here. Starting Shabbat is a difficult venture when our sunsets are swinging from light most of the night to dark most of the day. Moose get in our sukkot, and snowstorms and bears have prevented us from coming or leaving shul.

For example, our community, which has 160 family members, has no formal mikveh, or ritual bath, and yet we are surrounded by mikveh possibilities. Every one of Alaska’s 3 million lakes are pristine, and most of them are remote. Every summer I ready laminated mikveh prayer cards for Jewish Alaskans who wish to enjoy a mikveh experience against the incredible backdrop of rugged mountains and emerald green forests.

Most people’s Jewish experience, I imagine, come from a connection to Jewish institutions, Jewish professionals and Jewish friends. My Jewish experiences seem always to be nestled among the splendor of God’s creations.

The dispute over Holocaust analogies and its resolution was a great reminder that Jews in Alaska are a part of, not apart from, Alaska. We are not an isolated shtetl, but rather working members of the Alaskan community. There are several current Alaskan Jewish lawmakers, and we have been represented in state leadership all the way back to the framing of the Alaska Constitution. Prior to the current Anchorage mayor’s hurtful comments, three of the city’s previous mayors were Jewish.

We love this place, and we support it in every way we can.

Rabbi Abram Goodstein
is the rabbi of Congregation Beth Sholom in Anchorage, Alaska and the co-host of the podcast "What Divines Us."
The views and opinions expressed in this article are those of the author and do not necessarily reflect the views of JTA or its parent company, 70 Faces Media.