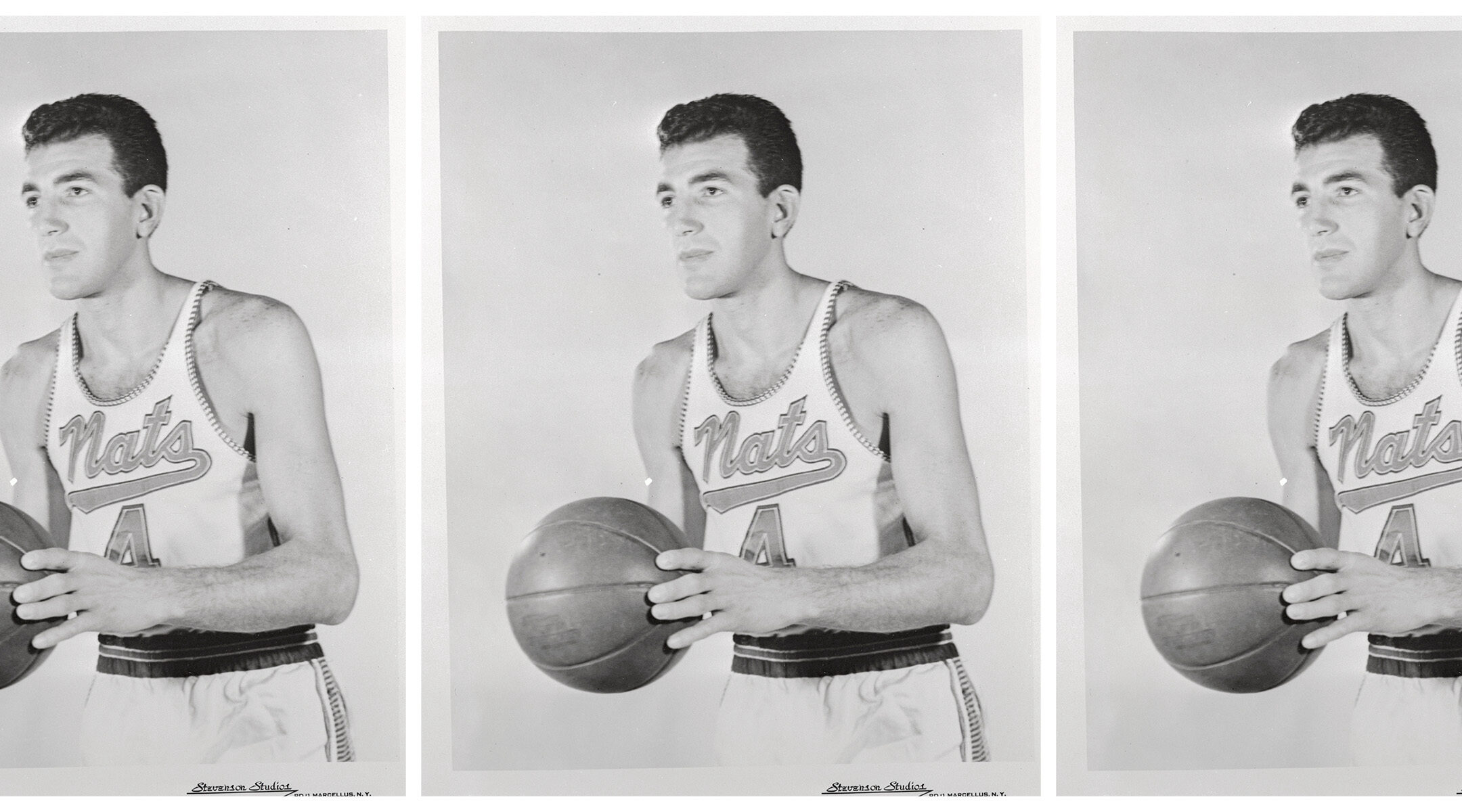 (JTA) — Twelve-time NBA All-Star Dolph Schayes is the only Jewish player on the NBA’s 75th Anniversary Team, a list created by a panel including legendary players, coaches and executives.

Billed as a list of the league’s all-time great 75 players (actually 76, thanks to a tie), the team was selected via voting by NBA greats and leading media members. When he retired in 1964, Schayes was the league’s career leader in games played, foul shots attempted and made, and personal fouls. He had led the Syracuse Nationals to the NBA title in 1955 and was named to the All-NBA First Team six times and the All-NBA Second Team six times.

Here are a few other important facts about the NBA’s greatest Jewish baller, who died at 87 in 2015:

1) Born to Romanian-Jewish immigrants, Schayes grew up in the Bronx and led DeWitt Clinton High School to a borough championship.

3) He came close to spending his NBA career as a hometown hero to throngs of Jewish fans at Madison Square Garden. But after drafting Schayes, the New York Knicks (then part of the BAA) were outbid by the Syracuse Nationals of the rival NBL (who had acquired his rights from the Tri-Cities Blackhwaks). The Nationals joined the newly formed NBA — the product of a merger of the BAA and the NBL — a year later.

4) He became the first player in NBA history to hit the 15,000-point mark by scoring 34 points in a 1960 game against the Bill Russell-led Boston Celtics (the previous season he torched the Celtics for a career high 50). On a related note: In 1961, he became the first NBA player to register 30,000 career total PRA (a statistic arrived at by totaling points, rebounds and assists).

5) Many of Schayes’ 15,000 points were scored with a two-handed high-arching set shot that teammates referred to as Sputnik. But Schayes was a versatile player who could also take it to the hoop and is often cited as a precursor to future highly skilled big men like Dirk Nowitzki.

6) That 1955 title came the year the NBA introduced the 24-second shot clock, which — along with the integration of the league — is often seen as the birth of the modern era of basketball. While many basketball players struggled to adjust to the new rules, Schayes adeptly made the leap.

7) The guy could shoot free throws! He led the league in free-throw shooting three times, finishing .849 for his career, and set a record by hitting 18 straight in a game in 1957. According to the NBA 75 write-up, Schayes would practice “on a 14-inch diameter hoop, which was fitted inside an 18-inch regulation hoop.”

8) After breaking his right arm in 1951, he played almost an entire season with a cast. On the bright side: The experience turned him into an even more lethal offensive threat by forcing him to learn to shoot with his left hand. In retrospect, this should come as no surprise…

10) When the Nationals moved to Philadelphia and became the 76ers in 1963, he spent one season as the team’s player-coach. After retiring as a player, he stayed on as coach. He was named coach of the year in 1966, after the team broke Boston’s nine-year stranglehold on the Eastern Division crown — but was fired after the 76ers were defeated by the Celtics in the playoffs. (The Sixers would win the title with a new coach the next season.)

11) It turns out drawing and committing all those fouls would come in handy — after his first coaching stint, from 1966-1970, he was the supervisor of NBA referees.

13) Schayes, who did not have a bar mitzvah, would say he did not grow up with much of a Jewish background. In a 1993 interview with Haaretz, he pointed to his first trip to Israel — in 1977 as coach of the U.S. men’s basketball team at the Maccabiah Games — as a seminal moment. “I grew up as a Jew,” he said of the opening ceremonies. “Every time I come I grow up even more.” The team won the gold.

14) His son, Danny Schayes, played in the NBA for 18 years. In the first edition of his “The Book of Basketball,” prominent sports writer and media mogul Bill Simmons dismissed the junior Schayes as one of the “all-time stiffs of the ‘80s.” But in later editions, Simmons retracted the swipe after additional research, saying he felt “terrible” after receiving “a long handwritten note” from the senior Schayes.

15) Following his basketball days, Schayes went on to become a real estate developer in Syracuse. In an interview in “Jewish Jocks,” an anthology dedicated Jewish sports figures, he quipped: “To put it simply, I own a lot of toilets.”