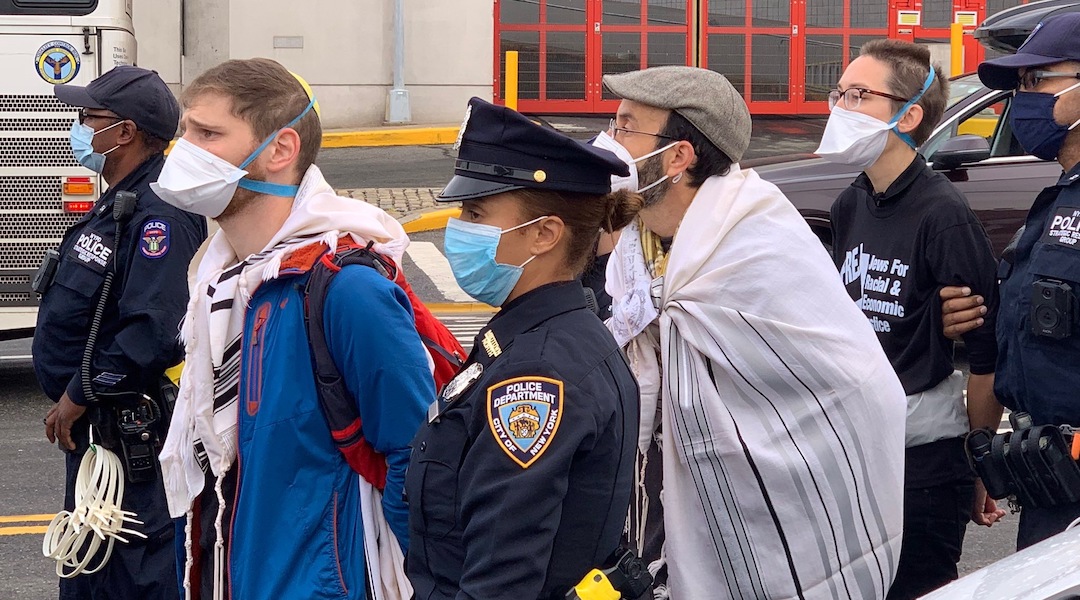 Rabbi Guy Austrian of the Fort Tryon Jewish Center in Upper Manhattan, in hat and prayer shawl, is among those arrested for blocking the West Side Highway in a protest demanding action on climate change, Oct. 25, 2021. (Courtesy William Bozian)
Advertisement

“Sunrise NYC rejects antisemitism in all its forms, and condemns the choices made by the DC hub,” Sunrise NYC tweeted Friday, aligning itself with a statement made by the national organization. “We stand with our Jewish members and the Jewish community against prejudice, and we will continue to stand arm in arm together during this urgent moment in the climate crisis.”

The statement came after the D.C. chapter called for the removal of  three Jewish advocacy groups from a voting rights rally. The request led to charges of antisemitism; the D.C. chapter apologized, although it reiterated its opposition to Zionism.

Jewish groups frequently partner with the Sunrise Movement and its affiliates, as the New York-based Jews for Racial and Economic Justice did on Monday morning when protesters shut stretches of Manhattan’s West Side Highway and FDR Drive to demand action on climate change.

Of the hundreds of protesters, more than 40 people were arrested, including Rabbi Guy Austrian from the Fort Tryon Jewish Center in Upper Manhattan.

JFREJ said it had no second thoughts about working with Sunrise NYC. “This was an NYC action and we were proud to do it with local partners,” said Sophie Ellman-Golan, director of strategic communications at JFREJ.

Most of the collaboration between the two groups has focused on backing and campaigning for progressive candidates in the upcoming city elections, she said. On Tuesday, JFREJ co-hosted with Sunrise Movement NYC, the Muslim Democratic Club of NY  and the Union of Arab Women a Zoom phone bank in support of Democratic City Council candidate Felicia Singh.

Rabbi Austrian did not respond to requests for comment.

The Manhattan highways protest was organized by Sunrise Movement NYC, in collaboration with JFREJ, Extinction Rebellion NYC and Fridays for the Future NYC.

“We chose to shut down these highways in part because both flooded during Hurricane Sandy,” said Veekas Ashoka, the protest’s organizer and an activist with Sunrise Movement NYC. This week marked the ninth anniversary of the superstorm that damaged much of the city.

Launched in 2017, the Sunrise Movement aims to mobilize young people around aggressive campaigns to make combatting climate change a political priority. Organizers of the Manhattan highway protest hoped their actions would reach President Biden ahead of the COP26 Climate Change Conference at the United Nations, which starts Sunday.

Shutting down Manhattan’s major arteries was also a metaphor in its own way, she said. “Traffic is a particular point of weakness,” Ellman-Golan said. “Everyone’s daily commute is going to change because of the climate.”