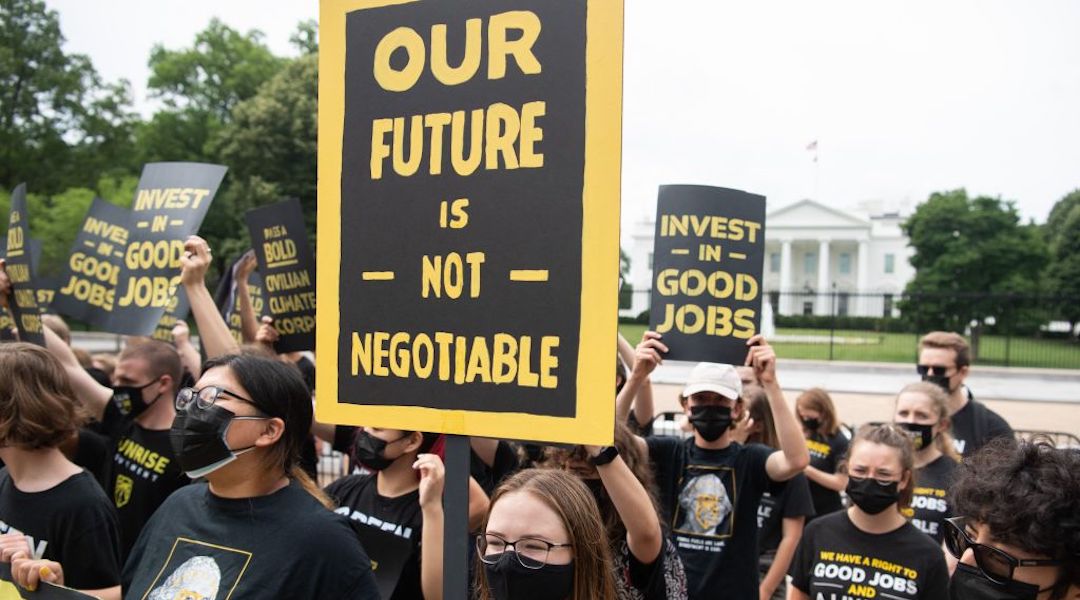 Protesters with the Sunrise Movement protest in front of the White House in Washington, DC, June 4, 2021. (Saul. Loeb/AFP via Getty Images)
Advertisement

(JTA) — Days after calling for a rally organizer to remove three Jewish advocacy groups from participating in a rally due to their Zionist beliefs, Sunrise DC, the Washington, D.C. affiliate of the national youth-led organization focusing on fighting climate change, issued an apology.

“In our statement we named three Jewish organizations and criticized their positions on Israel, but did not mention other organizations in the Declaration for American Democracy Coalition with similar positions. We apologize unequivocally for this. We now understand the way our action has fueled antisemitism, which benefits white nationalism and political movements that built power by dividing us, and endangers Jewish people drastically,” the group wrote in a statement posted to Twitter.

The group had previously pulled out of a voting rights rally because of the participation of the National Council of Jewish Women, the Reform movement’s Religious Action Center and the Jewish Council for Public Affairs — all groups that support Israel, which Sunrise DC called a “colonial project.”

“Given our commitment to racial justice, self-governance and indigenous sovereignty, we oppose Zionism and any state that enforces its ideology,” Sunrise DC said in a statement it posted to Twitter Oct. 20.

“To be clear, Sunrise DC’s statement and actions are not in line with our values,” the Sunrise Movement said in a statement Friday. “Singling out Jewish organizations for removal from a coalition, despite others holding similar views, is antisemitic and unacceptable.”

In the statement posted by the local group Sunday, Sunrise DC reiterated its opposition to Zionism. “We are committed to learning and growing as we continue to stand against Zionism, antisemitism, anti-Palestinian racism, and all other forms of oppression,” the group wrote.