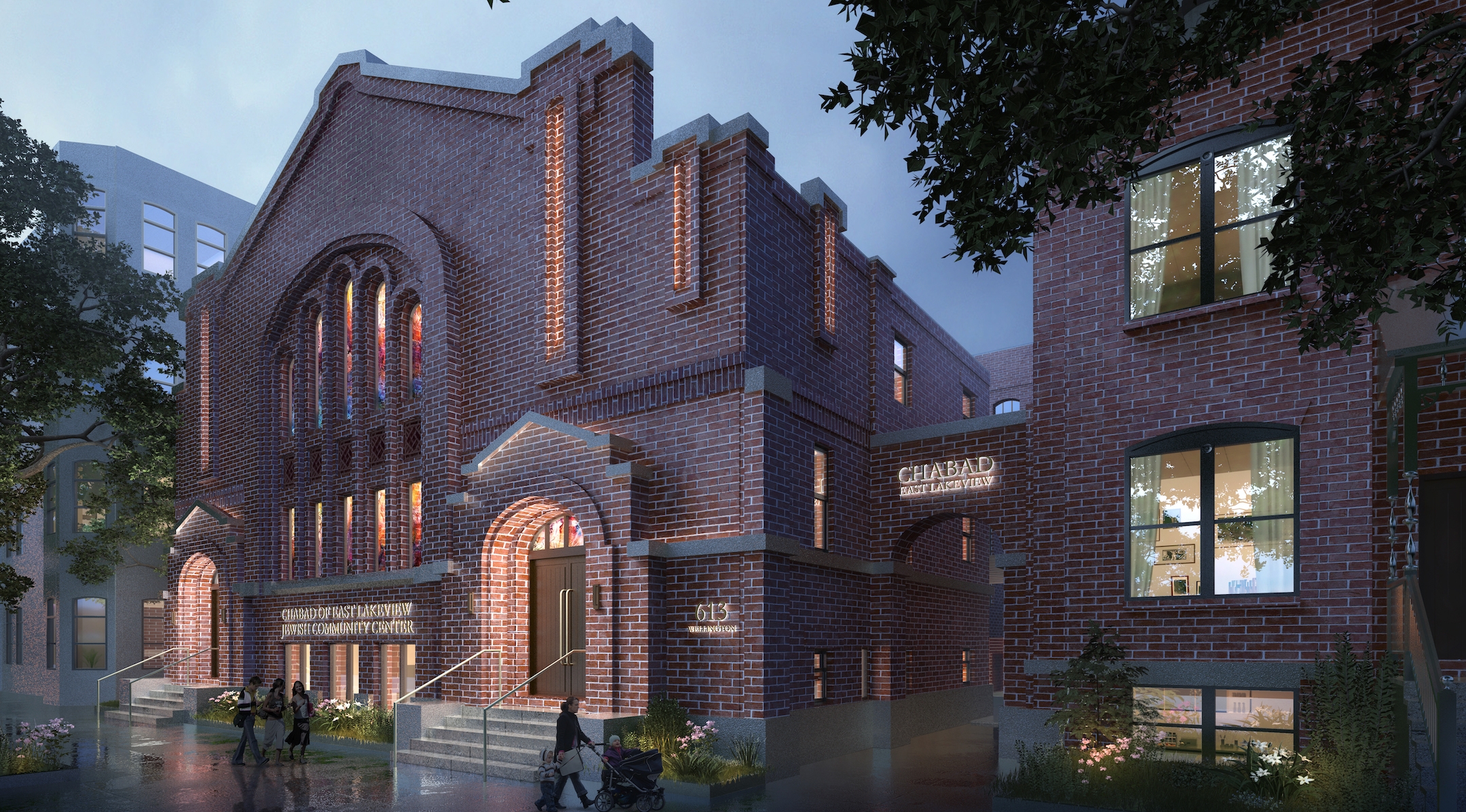 Chabad bought a historic church in Chicago last year and converted it into a Jewish center known as Chabad of East Lakeview. (Courtesy of Chabad)
Advertisement

(JTA) — Facing declining membership, a mainline Protestant congregation in Chicago’s Lakeview neighborhood listed its historic church complex for sale in the summer of last year. Church leaders were told it would take at least a year to complete the deal. But within days, an attractive offer came in, and a few months later the building’s $2.85 million sale closed.

The buyers were a pair of Chabad emissaries who had been serving Jews in the North Side neighborhood from their rented apartment since 2015. By converting the church complex, the Hasidic couple, Rabbi Dovid Kotlarsky and his wife Devorah Leah, could now realize their dream of expanding Chabad’s footprint and establishing a synagogue and preschool.

According to Chabad.org, key to making the purchase was a $2 million donation from Chicago tax attorney Jaques Aaron Preis, who heads the Phillip Leonian and Edith Rosenbaum Leonian Charitable Trust. Preis was quoted as praising Chabad’s “authenticity” and welcoming attitude.

The real estate transaction in Lakeview — a hub of Jewish life in Chicago, where large Reform, Conservative and Orthodox synagogues have long operated from stately buildings — represents just one of dozens of investments by Chabad in new buildings or in renovating and expanding existing properties.

In some regards, Chabad seems like an anomaly in the Jewish world. Many non-Orthodox Jewish institutions are unsure about what the future holds for their physical spaces after a year and a half of largely digital engagement — and after decades of declining synagogue membership for Judaism’s largest American denominations. Chabad, meanwhile, whose strictly Orthodox emissaries seek followers from across the range of Jewish beliefs and practices, appears to be confident about its capacity to attract large numbers of people to its centers.

The movement has embarked on at least $137 million in real estate projects since the start of the Covid-19 pandemic, according to numbers compiled by Chabad.org and reviewed by the Jewish Telegraphic Agency.

In Greenwich, Connecticut, the local Chabad paid $20 million to take over the site of a Jewish day school that closed last year. In Durham, North Carolina, a $3 million renovation of a historic inn — supported in part by Sarah Bloom Raskin, the Duke University law professor who is married to U.S. Rep. Jamie Raskin — was dedicated last week. And the Chabad at the University of Illinois is spending more than $7 million to own and renovate a massive Tudor-style fraternity house.

Because the thousands of Chabad emissaries around the world fundraise independently, Chabad’s news and public relations arm had to collect the data by gathering media reports and by carrying out an informal survey, according to Rabbi Motti Seligson, a Chabad spokesperson.

The survey turned up a number of capital projects that have not yet been publicly announced, including some purchases that are underway now. Seligson said the true extent of Chabad’s recent real estate expansion is likely much larger than the $137 million figure indicates.

But he said he wanted to release the information he had in conjunction with the 38th annual International Conference of Chabad-Lubavitch Emissaries, which takes place this week in-person in and around Brooklyn, New York. as well as virtually.

“We were doing an exploration of Chabad’s impact and growth to examine the effectiveness of various programs through this difficult time of the pandemic,” he said. “These numbers came into sharp focus as we looked at the level of engagement and our institutional and infrastructure growth.”

Seligson also pointed out that during the pandemic, Chabad minted 250 new emissary couples who went out to serve existing Chabad centers or establish new ones.

Even before the pandemic growth spurt, Chabad had already engaged some 37% of American Jewish adults in activities, according to recent survey data from the Pew Research Center.

Over the past 20 years, the number of Chabad synagogues in the United States has nearly tripled, reaching 1,036 in 2020, according to a tally by Joel Kotkin, a Chapman University professor who studies demographic trends, and independent researcher Edward Heyman. Over that same period, the overall number of synagogues declined by 29%.

“While their secular counterparts are shrinking, the Hasidim and other more traditionally observant Jewish communities in America are experiencing a surge of growth,” Kotkin and Heyman wrote in a Tablet magazine article analyzing their data.

While many Hasidic groups are growing primarily through procreation, Chabad, focused as it is on outreach, appears to be picking up a significant chunk of the Jews who have disaffiliated from the Reform or Conservative movements or who have never had much of an institutional affiliation to begin with. In its recent survey, Pew estimated that among Chabad participants, 24% are Orthodox, while 26% are Reform, 27% are Conservative, and 16% don’t identify with any particular branch of Judaism.

“In the present the core social needs of the Jewish world are filled by two kinds of organizations: One is Chabad, which is expanding rapidly and offers a full gamut of services,” Kotkin and Heyman wrote. (The other kind of organization is the local Jewish federation and its affiliated Jewish community centers.)

As Chabad proliferates, it is finding among the Jews it serves many willing donors. Sometimes, individual contributors like the Preisses in Chicago play an outsized role, but their gift was accompanied by $500,000 in small donations, according to Chabad.org.

In comments to Chabad.org, the Preisses explained why they gave to Chabad. “They focus on each mitzvah without criticizing. They’re so welcoming,” said Jacques Preis, who was raised Reform. “It’s not a diluted Judaism,” said Evelyn, his wife.

“Much of the funding for these campaigns is raised locally from people whose lives are personally enriched by Chabad in their community,” Seligson said. “They represent people from large donors to large numbers of small donors like college students who are committed to supporting Jewish life and programs that inspire them with whatever they can based on their means.”