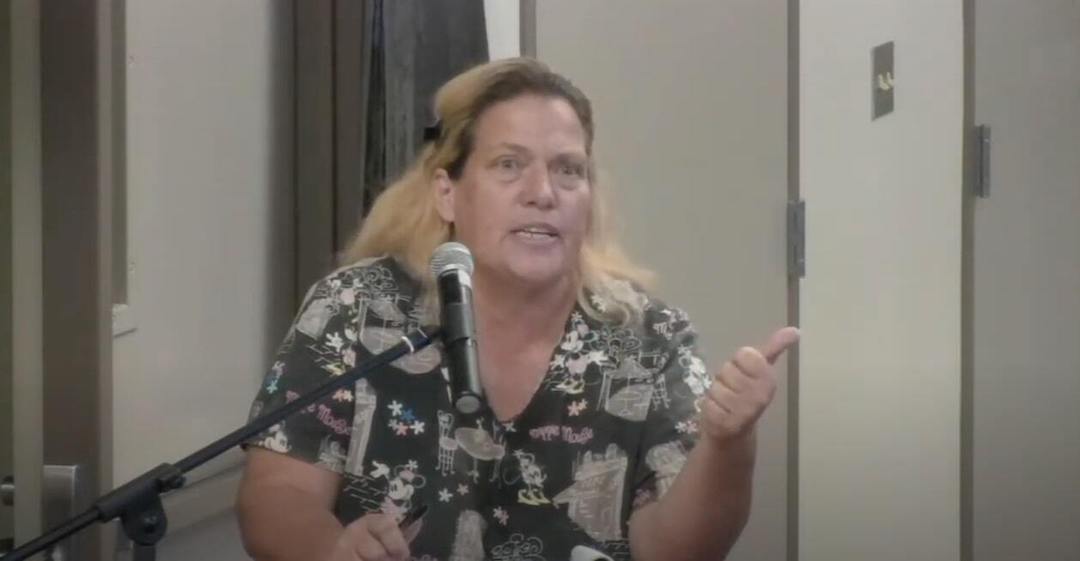 An individual, who identified herself as Melanie Rettler, accused “the Jews” of being responsible for COVID vaccines and running a shadow government in public comments to the Chandler Unified School District governing board. (Screenshot by Nicole Raz/Jewish News of Greater Phoenix)
Advertisement

(Jewish News of Greater Phoenix via JTA) — An antisemitic tirade at a school board meeting in suburban Phoenix last week has spurred an extensive response among local officials and Jewish leaders — some of whom say they were distressed that board members did not rebut the comment at the time.

During the public comment portion of the meeting of the Chandler Unified School District board, a woman who identified herself as Melanie Rettler spoke for over a minute about critical race theory and vaccines — topics not listed on the meeting agenda but at the center of heated public debate nationwide.

Her comment crescendoed with an antisemitic claim drenched in the language of right-wing conspiracy theories.

“Every one of these things, the deep state, the cabal, the swamp, the elite — you can’t mention it, but I will — there is one race that owns all the pharmaceutical companies and these vaccines aren’t safe, they aren’t effective and they aren’t free,” Rettler said. “You know that you’re paying for it through the increase in gas prices, the increase in food prices — you’re paying for this and it’s being taken from your money and being given to these pharmaceutical companies and if you want to bring race into this: It’s the Jews.”

The incident was the latest in a nationwide series of school board meeting disruptions, of the sort that the U.S. Justice Department is seeking to curb. But what happened next has spurred the most discussion locally.

Some Jewish organizations expressed outrage that Mozdzen and other board members didn’t respond more strongly to the antisemitism.

The Arizona chapter of the Israel American Council said it wrote to the Chandler board requesting that “in the future the board members themselves speak up the very moment such hateful lies are expressed.”

“Our history teaches us that allowing such racism to pass unchallenged only invites more of the same,” the group said in a statement.

Meanwhile, the Anti-Defamation League sent a letter to the board and each member expressing concern about the remarks and called the district to “publicly demonstrate — in the strongest possible way their commitment to fighting antisemitism and all forms of hate.”

The group added, “The lack of response from board members to last night’s public speaker who used blatant antisemitic tropes and stereotypes to promote anti-vaccine and anti-CRT views is simply appalling and dangerous.”

Exactly what school board members can do about comments like Rettler’s is unclear. Terry Locke, a spokesman for the school district, told the Jewish News of Greater Phoenix that it would be a violation of Arizona’s open meeting law for board members to discuss items that are not on the agenda.

Board members in Arizona are allowed to respond to criticism, but what constitutes criticism is not clear, and board members tend not to engage speakers extensively, a spokeswoman for the Arizona School Boards Association told the Arizona Republic.

The response after the meeting was more decisive. After Chandler’s interim superintendent, Franklin Narducci, learned about what had happened, he got in touch with representatives of the Jewish community.

Paul Rockower, executive director of the Jewish Community Relations Council of Greater Phoenix, praised the district’s outreach to and collaboration with the Jewish community. So did Rabbi Michael Beyo, CEO of the East Valley Jewish Community Center in Chandler, who said he is pleased and grateful that Narducci sought to collaborate.

“An ignorant person made an antisemitic comment. That’s not newsworthy,” Beyo said. “What is important is that the superintendent canceled all of his meetings [Thursday] in order to deal with this.”

Narducci collaborated with Beyo to craft a statement that condemned hate speech and denounced the antisemitic statements.

“The district reaffirms its commitment to use its influence as a public educational institution to teach students the value of an inclusive community and give them the tools to engage in our increasingly diverse society,” the final statement read. “Chandler Unified School District denounces hate speech at all levels.”

Beyo’s statement applauded the district governing board, administration and Narducci for “leading by example and speaking out against the hatred of all people.”