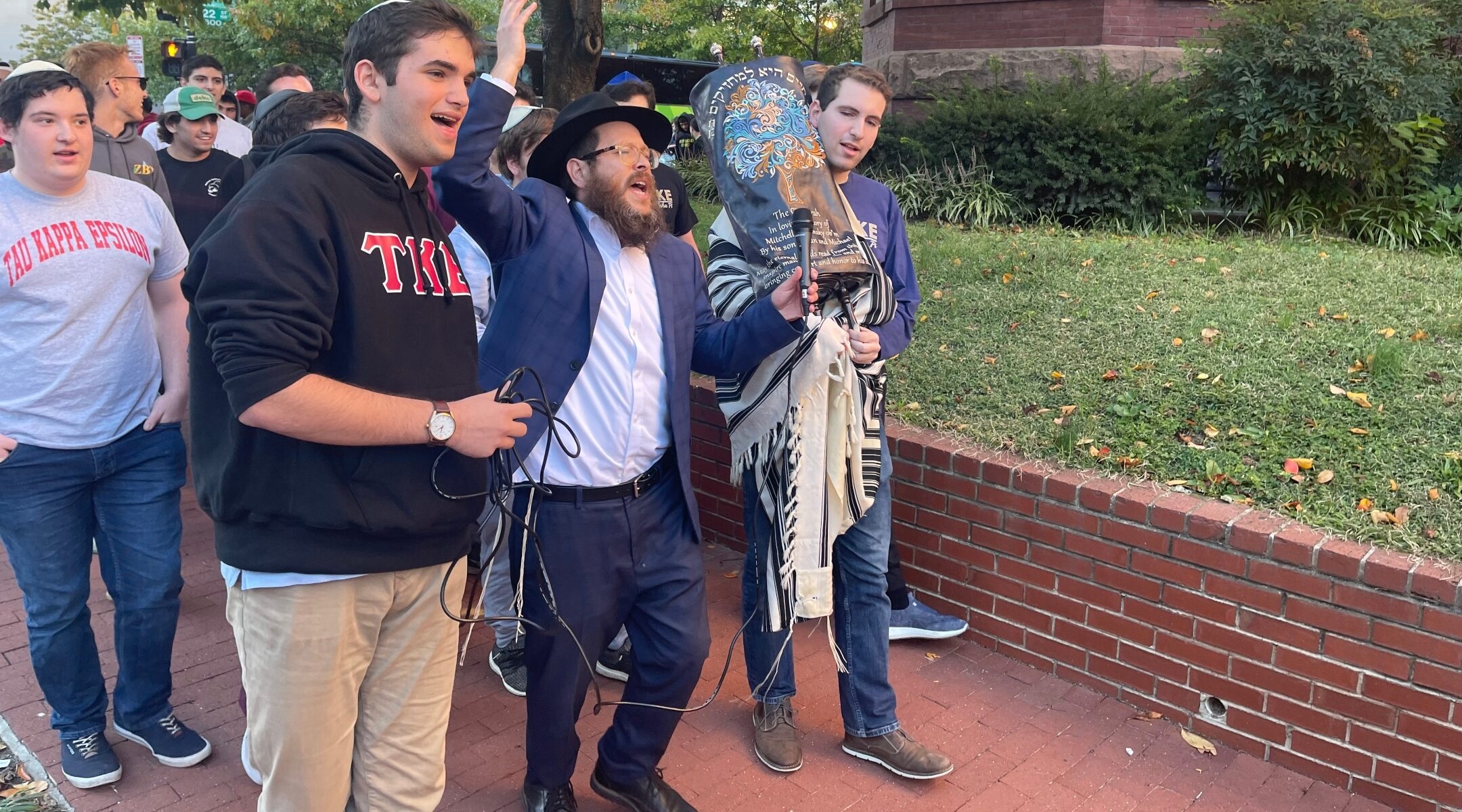 Rabbi Yudi Steiner leads George Washington University students in song and dance as they mark the destruction of an imitation Torah in a frat house in Washington DC, Nov. 1, 2021. (Ron Kampeas)
Advertisement

Pittel’s brothers in the Tau Kappa Epsilon fraternity strode alongside him through the streets that make up the urban campus of George Washington University on Monday, a couple of them holding real Torahs, the kind that are inscribed by hand and blessed and cost thousands of dollars.

The Torah Pittel gingerly bore in his arms as the light faded in Foggy Bottom from bright blue to burnished red was not the genuine article; it was the kind you get for maybe $20 in a temple gift shop, the kind awarded as a prize in Hebrew school. 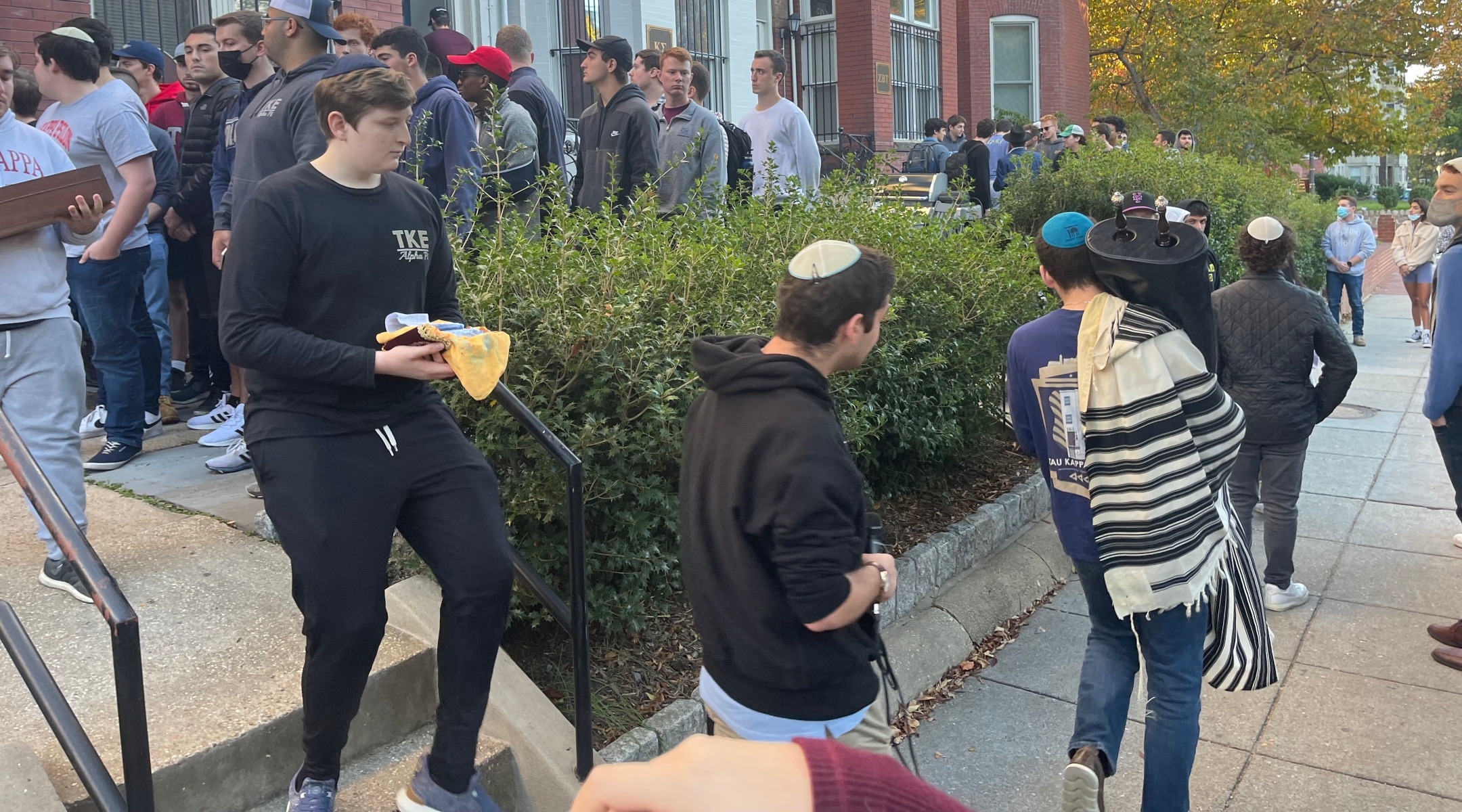 Gag or gift? None of the 40 or so brothers in the TKE (knowns as “Teek”) house could tell you the imitation Torah’s provenance, but they could tell you its importance: It was used in a basement ritual to initiate the 12 brothers who were Jewish.

And they could tell you about its sordid end, sprinkled with detergent in a pre-dawn raid on the basement where pledges are initiated. The walls were splashed with hot sauce and there was an attempt to remove smoke detectors. But it was the Torah’s demise that went viral online and, in person, brought hundreds of students at GWU together to mourn intolerance and to wonder at the rancor that could have spurred such an act.

Police are investigating the incident as a possible hate crime but have made no arrests. There were no signs of forced entry, and it is not yet clear who the vandal was. Still, the fraternity’s leaders and a Chabad rabbi on campus, along with thousands of people who expressed alarm and anger on social media, say they know what happened at TKE.

“Saturday night’s break-in was a direct affront to the safety of my chapter,” said Chris Osborne, the chapter president, who seemed a little overwhelmed at the hundreds of people packing 22nd Street, where the frat house is situated, and which was blocked off by local police.

“It was a blatant act of hate and antisemitism,” said Osborne, who is 22, at the launch of the rally, speaking from the frat house’s steps. “I witnessed the pain this has caused my Jewish brothers and my heart aches for the entire Jewish community at GW who have to endure yet another act of hate. Change needs to happen.”

Rabbi Yudi Steiner, who runs the Rohr Chabad Jewish Student Center on campus, led the crowd in traditional songs of joy and mourning on a parade that included three stops to affix mezuzahs upon townhouses near the Foggy Bottom campus. The parade culminated in a Torah reading at a plaza in front of the George Washington University library.

“We quickly realized that we needed to channel the Jewish tradition of responding to darkness with light,” he said. “When antisemitism rears its ugly head, we respond with Jewish celebration.”

So there was dancing and there was prayer. There were also whispers among the students, about the female student who just reported being sent a swastika, about how triggered some students felt when they heard about what happened at the Teek frat house on 22nd street. Some danced and sang along with the songs that Steiner was singing, broadcast by a portable amplifier, including “Am Yisrael Chai,” “The People of Israel Live,” and “Gesher Tzar Meod,” “A Very Narrow Bridge.”

What happened exactly is not yet clear. Osborne in an interview said he is certain it was an act of antisemitism because the text used to swear in Christians was untouched.

“We had a Bible and a Torah in our original equipment set and the Bible was left alone and the Torah was damaged,” he said.

He also said that while there were no signs of forced entry, he saw evidence that he said pointed to a break-in. “The door was left open to the basement and someone had escaped out of the basement and left the door open,” Osborne said.

In an interview, Steiner said he had questions about why an imitation Torah was used to pledge frat boys, but they were for another time.

“There was a range of emotions, people who were crying, and were really, really hurting,” Steiner said of his first meeting, post-raid, with the frat brothers. “We need more time to speak with them to understand what the Torah was doing there in the first place. It’s a fair question, ‘What are you doing with a mini-Torah in a non-Jewish house?’”

What they were doing — initiating pledges — the frat brothers plan to keep on doing, but this time with a real Torah, donated during the event by the campus Hillel. “We want to show that you know, we’re going to come out of this, and you can hit us but we’ll get back and show strength and unity,” said Osborne.

Osborne wants better security assurances from the campus and the reports of antisemitism to be more seriously addressed. “We need to be more inclusive, we need to make people feel like they can practice their religion on campus,” he said.

About a quarter of GWU’s more than 12,000 students are Jewish, according to Hillel International, which supports and tracks Jewish life on college campuses. Last week, Hillel and the Anti-Defamation League released a report finding that a third of college students said they personally experienced antisemitism in the last year. Like many other campuses, GWU over the years has been the site of Israel-related controversies, as well as antisemitic vandalism and harassment.

“The status quo where Jewish students at this campus fearing for their lives has existed for far too long,” Osborne said during his remarks on the stairs in front of the frat house.

Steiner, who runs a busy campus institution, suggested that describing the university as somewhere Jewish students fear for their lives might be overstating things. “GW is not an antisemitic place,” Steiner said in the interview. “There is antisemitism everywhere, but GW is not antisemitic.”

Steiner asked the women and men to separate ahead of the Torah reading, in the library plaza. A few women moved hesitantly to one side of the plaza; many did not.

The session ended with a song, with lyrics handed out on laminated cards: “The Place Where I Belong,” written in 2010 by an Orthodox singer named Abie Rotenberg about a Torah who sings in the first person about surviving Nazi raids in Kiev only to find its way to a warm shul in America.

Such was not the fate of the little imitation Torah at TKE House.  “It’s going to be put in shaimos,” Steiner said: Wrapped and buried.