‘A new Judaica’: Meet the Israeli entrepreneurs putting the Bible on the blockchain 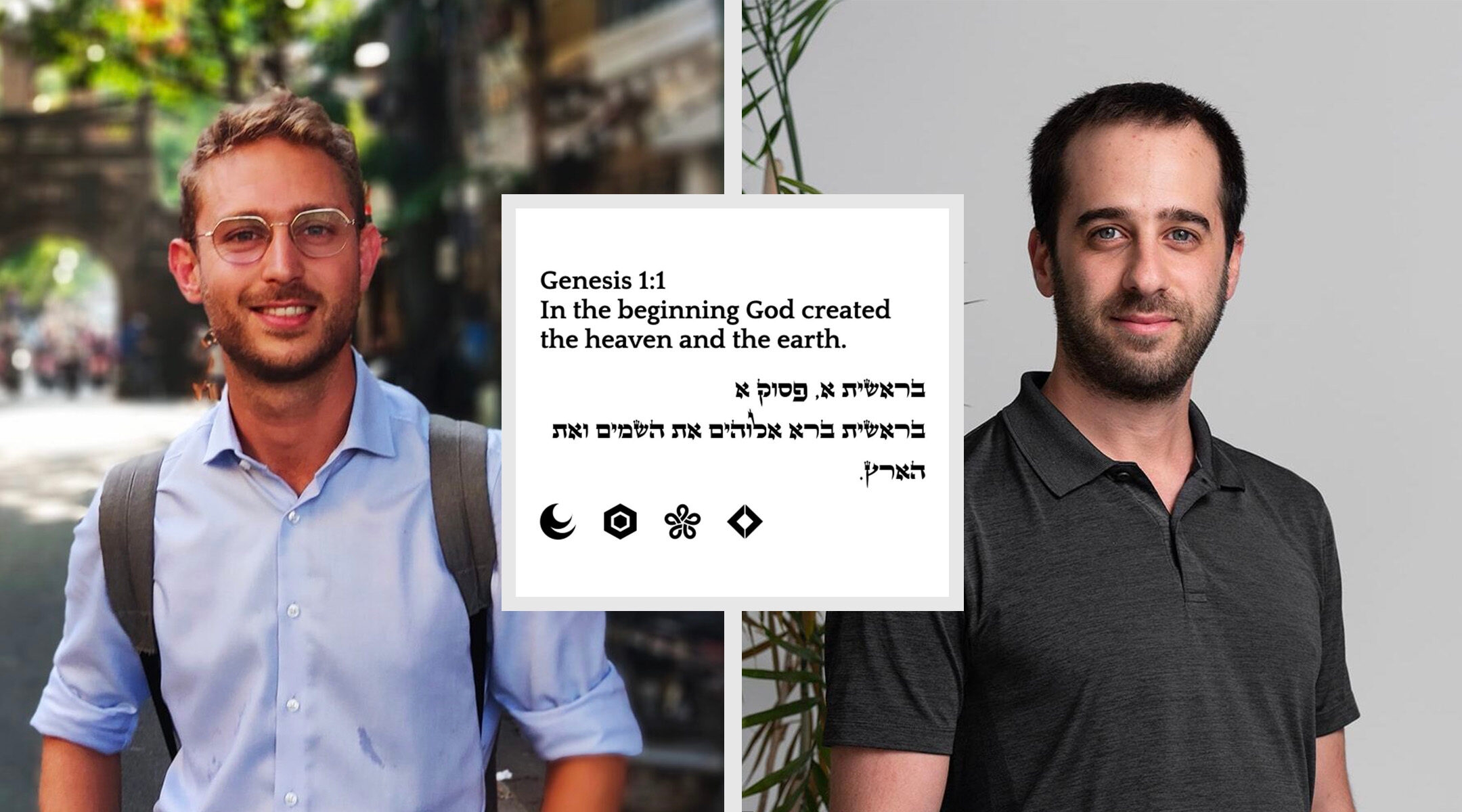 Yonatan Bendahan and Yuval Meyraz are the founders of CryptoVerses, a company selling nonfungible tokens of verses from the Bible. (CryptoVerses)
Advertisement

A Bible on the blockchain: priceless — or at least that’s the hope of two Israeli entrepreneurs who are turning verses from the Torah into NFTs.

Nonfungible tokens, otherwise known as NFTs, have become a hot commodity among art collectors and blockchain enthusiasts in the last year. Everyone from Grimes to The New York Times has gotten in on the game, selling everything from art to a newspaper column to clip-art pet rocks, in a new industry that can sometimes feel like a scam.

Now CryptoVerses, a company founded by two secular Israelis, is hoping to make NFTs composed of verses from the Bible encrypted in Hebrew and English into the next big blockchain collectible.

CryptoVerses organizes its verses into small groups, arranged by story, and has already sold 30 of them for an average price of 0.91 Ethereum, or approximately $4,150. While others have created NFTs of artwork connected to chapters of the Torah, CryptoVerses appears to be the first company to encrypt the actual biblical text.

“It’s like an evolution of the printing press,” Yonatan Bendahan, a software developer and one of the cofounders of CryptoVerses, told the Jewish Telegraphic Agency. He likened the Bible verse NFTs to “a kind of a new Judaica.”

Yuval Meyraz, Bendahan’s cofounder, recalled carrying a Bible with him on hikes as a youth group counselor. He would read stories from the Bible that were relevant to wherever they were hiking in Israel as a way of connecting his campers to the text.

“It was a great way to deliver the story to the next generation, but these days I’m working on a bit more of a technology way to connect young people … with the stories we love and grew up on,” Meyraz said.

JTA spoke to Meyraz and Bendahan about why someone would want to own an encrypted Bible verse and how the idea has been received. This conversation has been edited and condensed.

JTA: First of all, can you explain what an NFT is for those of us who still don’t get it?

So why would someone want to buy an NFT of a Bible verse?

Bendahan: We see it as kind of a new Judaica, some piece of something that you can collect that you have some personal connection to, and you want to give it to yourself or to one of your family members. Our second objective is to encrypt the Bible text on the blockchain. So we want to take the Bible text, which was started from writing on a piece of paper or something which was before even paper, and then transfer into digital copies over the internet. And now the next phase which we are leading is putting in on the blockchain. And what’s so unique about it is that we put this text on a distributed network, and in this way we can make sure that no one can delete it, and it can be available to anyone. So, by owning an NFT that encrypts a Bible verse, you can participate in preserving the text on the blockchain.

How can you even make the Bible into NFTs when no individual person can really own the Bible?

Meyraz: So as you said, no one can own the Torah, it’s totally public domain. And we don’t really claim that anyone is going to own it, of course. But we see it more like a piece of art that we made for the first time. For example, let’s say that I took 5,884 candlesticks from gold, and on each one of them I minted a different verse. And we have each candlestick with a specific verse only once. It’s unique. Now, I’m going out there and selling my art with the specific verse, and it’s not that I’m selling the Bible, but we own the unique canvas, because you have only one. So it’s the same when we created this NFT: It’s a piece of art, we sell the encrypted verse and it’s the first time in history of the Jewish people and it’s what we sell. So the NFT is something that you can own — but no one owns the Bible itself.

Who are the people buying these NFTs? And has there been any backlash?

Meyraz: Religious people, some of them, we were surprised. They found it super interesting. We were afraid that we would get some backlash on the project. We didn’t know how it would be accepted, especially with religious [Jewish] people. And what surprised us was that it was mostly religious people who are more excited about the project. So we have some investors who are religious, studying in yeshiva even now. One of them actually even helps us with the text, with analyzing the text — you’d be surprised how many versions of the Torah there are, so we had to choose which version is the right one. It’s really surprising how our intuition that we hope that everyone will connect to the story to preserve the story, how it really connects to everyone in the real world. This was really surprising, I think it’s very beautiful that people see texts as something precious, especially in the digital age.