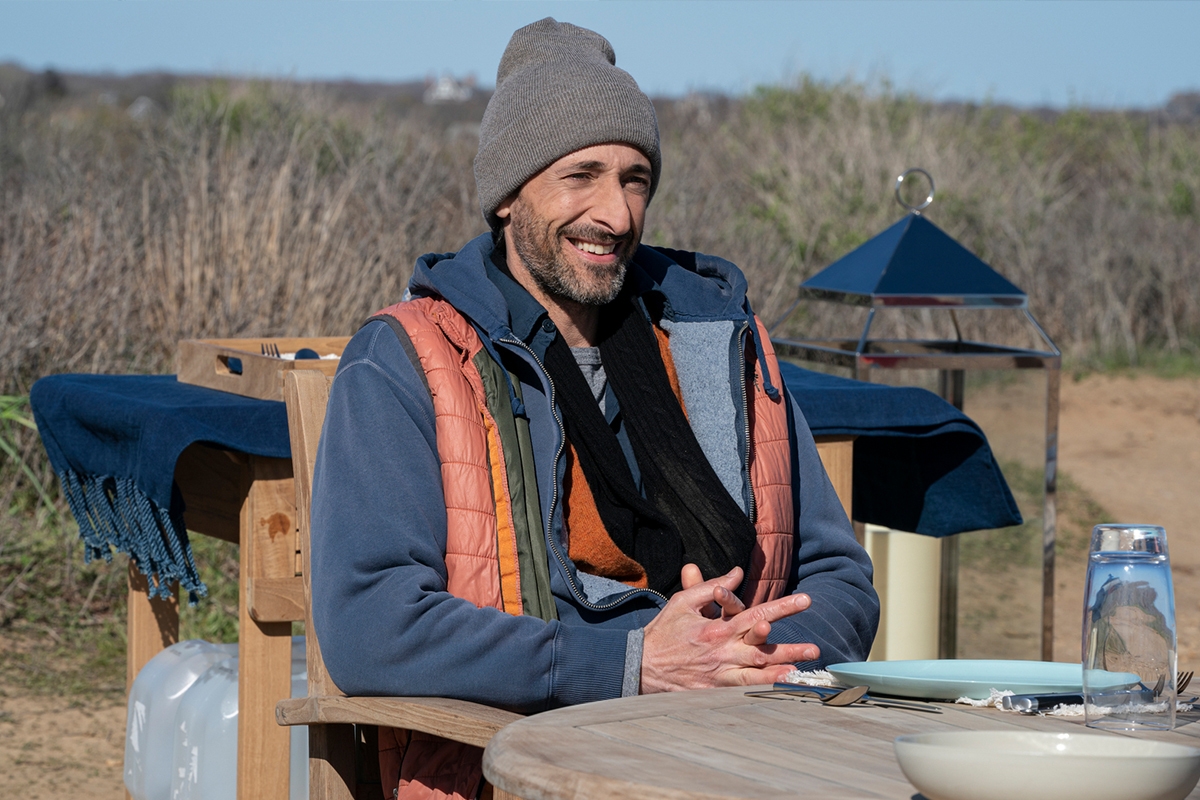 Spoiler alert: This piece contains plot details about HBO’s “Succession,” including extensive details about the Season 3 episode “Lion in the Meadow” that first aired Nov. 7, 2021.

(JTA) — In the very first shot of Kendall Roy walking into the island home of Waystar investor Josh Aaronson on the latest episode of HBO’s hit series “Succession,” a massive mezuzah is visible on the doorframe behind him.

The mezuzah, which looks to be about 8 inches long, is positioned well about Kendall’s head (he’s short) and it sets the tone for the encounter: Aaronson’s Jewish identity is present, and looming.

Kendall and Logan Roy (Jeremy Strong and Brian Cox) are called to Aaronson’s island retreat because the investor is concerned that their feuding — and the FBI investigation it has triggered — will be bad for business.

Aaronson, who has not previously appeared on the show, is played by Adrien Brody, the Jewish actor who won an Oscar for his portrayal of a Holocaust survivor in “The Pianist.” His presence offers a new lens for the viewer to watch the conflict between father and son play out — and for Logan’s antisemitism to once again take front and center.

Logan’s antisemitism has been mentioned briefly on the show before, and his oldest son, Connor, alludes to it again in this week’s episode, when he tells his sister about Waystar, “What was it they used to say around here? No Blacks, no Jews, no women above the fourth floor?”

But “Succession,” a lifestyles-of-the-rich-and-famous psychodrama revolving around the petty squabbles of a family-run media empire, had never fully put its patriarch’s antisemitism on display until the episode where Brody appears.

The first taste of it comes not from Logan but his confidant, Frank Vernon, who tells Kendall while dispatching him to Aaronson’s island, “He wants his pound of flesh, all right?” The line is from Shakespeare’s play “The Merchant of Venice,” considered by many to reflect antisemitism, in which the Jewish moneylender Shylock demands a pound of flesh from a character who cannot repay his debt. 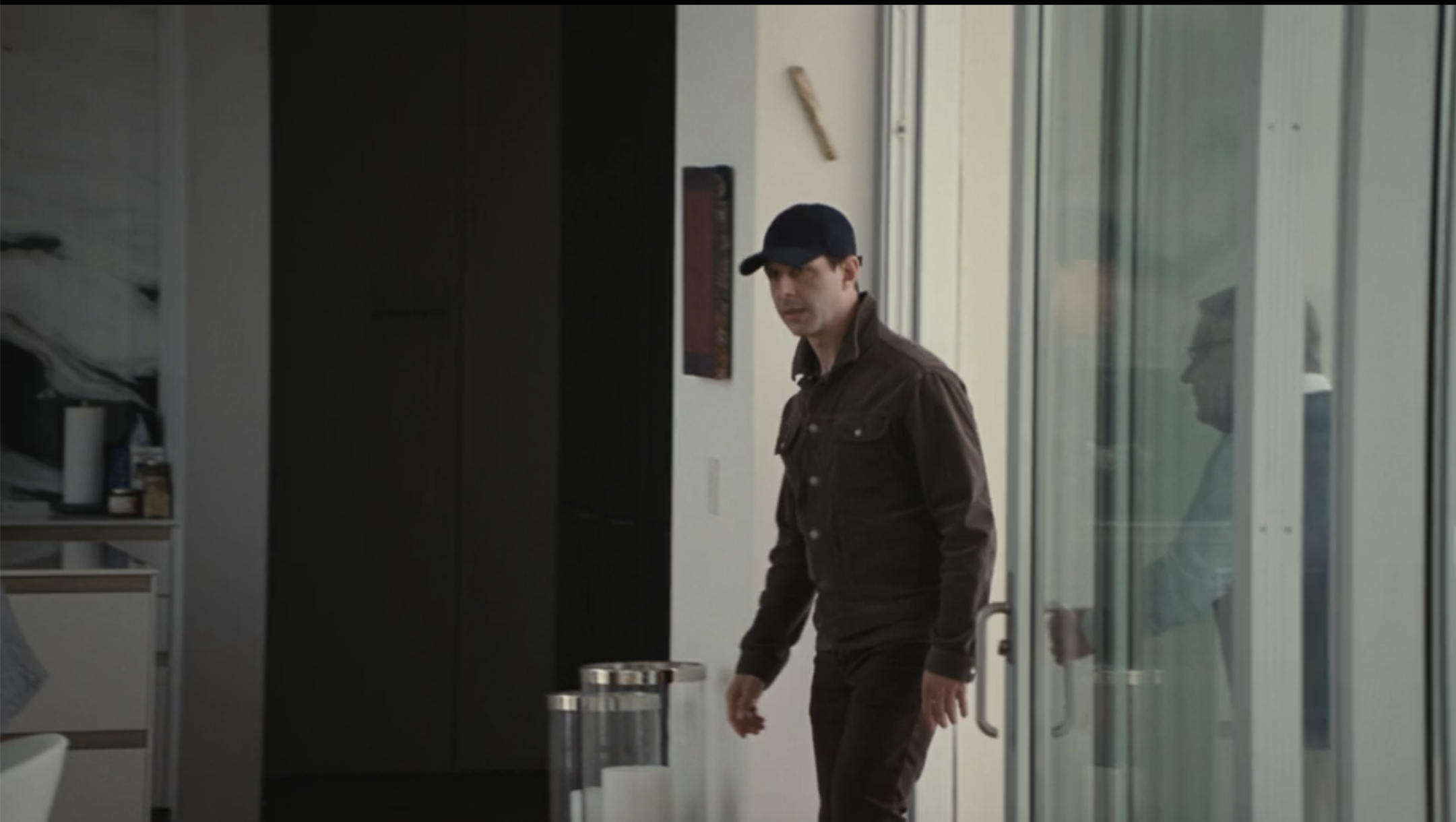 Kendall Roy, one of the scions of the Waystar fortune, enters the home of investor Josh Aaronson on HBO’s “Succession,” with a mezuzah behind him. (Screenshot)

But Logan is the main offender, starting just a few minutes after he arrives at Aaronson’s glass-walled house and tells him not to worry. “Back me, sit tight, count all your gold in your castle right here, and I’ll make you whole,” he says, a look of concern flashing across Kendall’s face. Is he leaning into an antisemitic stereotype about Jews caring only about money, or is he simply being straight with an investor who, well, really only cares about money?

An answer comes just a moment later, when Aaronson rejects the argument and suggests a walk. “Look at this f–king New York wiseacre,” Logan Roy says. He wouldn’t have been the first to use “New York” as an antisemitic dog whistle.

Their walk through the dunes ends at a table where waiters drop off platters of lobster and clams, which Aaronson digs into as his companions squirm. (Aaronson later refers to the menu as “f–king rodents,” a possible allusion to the fact that they are not kosher.) At the end of the meal, after Logan promises to try to get Aaronson what he wants to remain with an investor, Aaronson says he wants the walk back to be easier.

Everyone loves bagels, right? The show makes clear that this, too, was intended as an antisemitic dig when Kendall Roy confronts his father on the walk back. During his tirade, he tells Logan about Aaronson, “He f–king hates you too. Your antisemitic f–king bagel and gold bullshit!”

The moment is intended to offer one more distinction between father and son — that while they are both ruthless actors in the boardroom, Kendall lacks some of the hateful edge that characterizes Logan, and has probably contributed to his success.

Brody won’t say whether he’ll appear again on “Succession,” though he told Variety that he would like to. Fans of the show said on social media Sunday night that they’d like that, too.

The encounter isn’t the only Jewish content on the episode, a rarity for a show that has rarely even alluded to the existence of Jews. (A senator in a past season who is clearly modeled after Bernie Sanders, the Jewish Democrat from Vermont, is not given any particular identity; he’s played by Eric Bogosian, who is not Jewish.)

At one point, Tom Wambsgams (Matthew Macfadyen), the WASPy husband of Siobahn Roy (Sarah Snook) who is poised to take the fall for Waystar’s criminal practices, is seen flipping through a binder of prisons. He tells Siobahn he’s leaning toward Otisville (whether he’ll actually head to jail, or get to choose where, is unclear).

“Otisville is upstate. You know, the Jewish jail?” Tom says. “I just keep hearing a lot of really good things about it. Kosher vending machines and sturdy bunks and …”

Among the Jewish prisoners to spend time at Otisville are Michael Cohen, the associate of Donald Trump; Sholom Rubashkin, the kosher meat executive convicted on fraud charges; and Sheldon Silver, the former New York Assembly leader. A former prisoner there called it “federal Jewish heaven” and said he fondly recalled Shabbat dinners and Passover seders at Otisville.