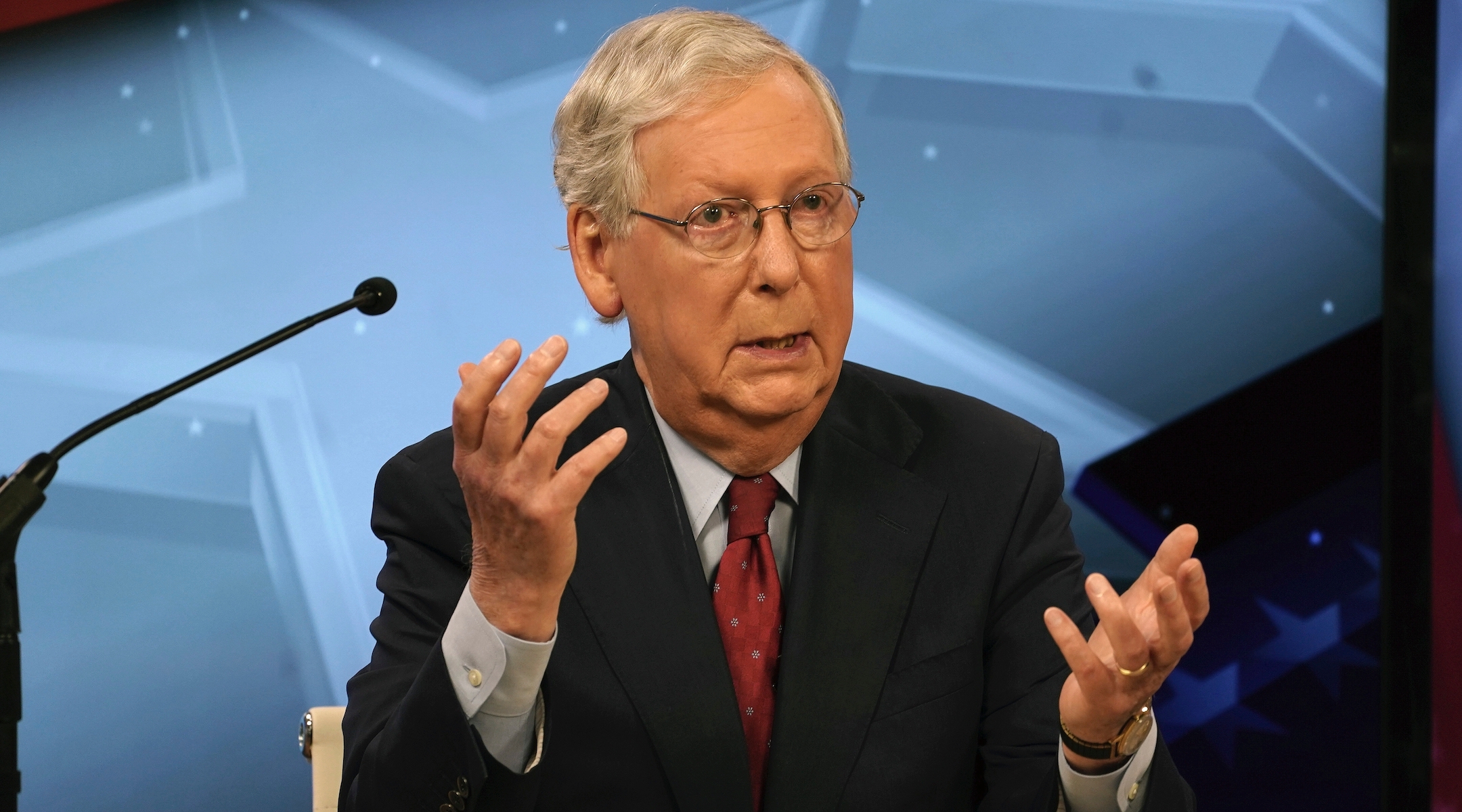 (JTA) — In a debate with his election opponent on Monday night, Mitch McConnell asked voters: “Do you want somebody from New York setting the agenda?”

On the surface, McConnell, the Senate majority leader, was referring to Sen. Chuck Schumer, the longtime Jewish politician from New York who would take McConnell’s title and position if Democrats regain control of the Senate. McConnell is heavily favored to win in his race with Democrat Amy McGrath.

But when Politico reporter Jake Sherman tweeted the “New York” quote, many of McConnell’s critics pointed out that President Donald Trump is also from New York, and McConnell has no problem with Trump setting the agenda for the country.

“‘Wait, Trump is from New Yo– oh, I see what he means by ‘New York,'” tweeted Jonathan Chait, a liberal writer for New York magazine. Matt Boxer, a Jewish studies professor at Brandeis, tweeted, “there’s a long history of ‘New York’ being used in this context to mean ‘Jews.'”

Did McConnell blow an anti-Semitic dog whistle? Or did he just find a way to describe his rival’s liberal political views in a way that happened to raise eyebrows?

It’s true that the term “New York” has often been strongly associated with Jews. New York has long been America’s most Jewish city and home to many of the most prominent American Jews — as well as large visibly Jewish communities. Foods typically associated with New York, like bagels and deli, are Jewish foods. Jewish writers, directors and actors — from Nora Ephron to Jerry Seinfeld to (the now canceled) Woody Allen — have defined New York on screen and in the popular imagination. For 28 of the past 47 years, New York’s mayor has been a Jew.

Notably, the outrage over this particular incident hasn’t yet left Twitter, which is an outrage machine. And, regardless of religion, New York is culturally very different from Kentucky, where McConnell is running. New York City is one of the most liberal areas in the country, and it could reasonably be held up as a symbol of liberal American politics and culture.

But previous politicians have gotten in trouble for making the New York-Jewish connection, whether explicitly or implicitly.

In 2016, Ted Cruz criticized Trump on the presidential debate stage of having “New York values.”

“There are many, many wonderful working men and women in the state of New York. But everyone understands that the values in New York City are socially liberal, pro-abortion, pro-gay marriage and focus on money and the media,” Cruz said.

At the time, some said Cruz’s rhetoric was an anti-Semitic dog whistle. Cruz didn’t help his case when he said that Trump has chutzpah, which he called a “New York term.” Chutzpah is, in fact, a Yiddish (and therefore Jewish) term.

The most famous political association between Jews and New York came in 1984, when Jesse Jackson, who was then running for president, called the city “Hymietown,” an anti-Semitic slur. He apologized, but the backlash helped tank his candidacy.

The term has shown up in fictional politics, too. On the pilot episode of “The West Wing,” a Christian lobbyist snipes at a Jewish official’s “New York sense of humor.” As the room fills with tension, another Jewish colleague shoots back, “She meant Jewish.”

Despite the endless list of reasons why Democrats loathe McConnell, he has never been accused of anti-Semitism over a long career.

While there has been no shortage of coded anti-Semitism in politics this year, from offensive caricatures to QAnon conspiracy theorists to politicians who cozy up to white supremacists, McConnell has never been part of that group. As of Tuesday afternoon, Howtofightantisemitism.com, a progressive website that comprehensively lists recent allegations of right-wing anti-Semitism, returns zero results for Mitch McConnell.

The one possible exception here involves a 2008 ad attacking… Chuck Schumer. The ad, video of which is no longer available, attacks Schumer with a voiceover using a stereotypically New York accent, and does not mention McConnell’s then-opponent at all. At the time, Schumer was not the Democratic Party’s leader in the Senate. Observers noted that it might have played off Jewish stereotypes, though others thought the accent was less Mel Brooks than Tony Soprano.

Soprano, for the record, is from New Jersey.