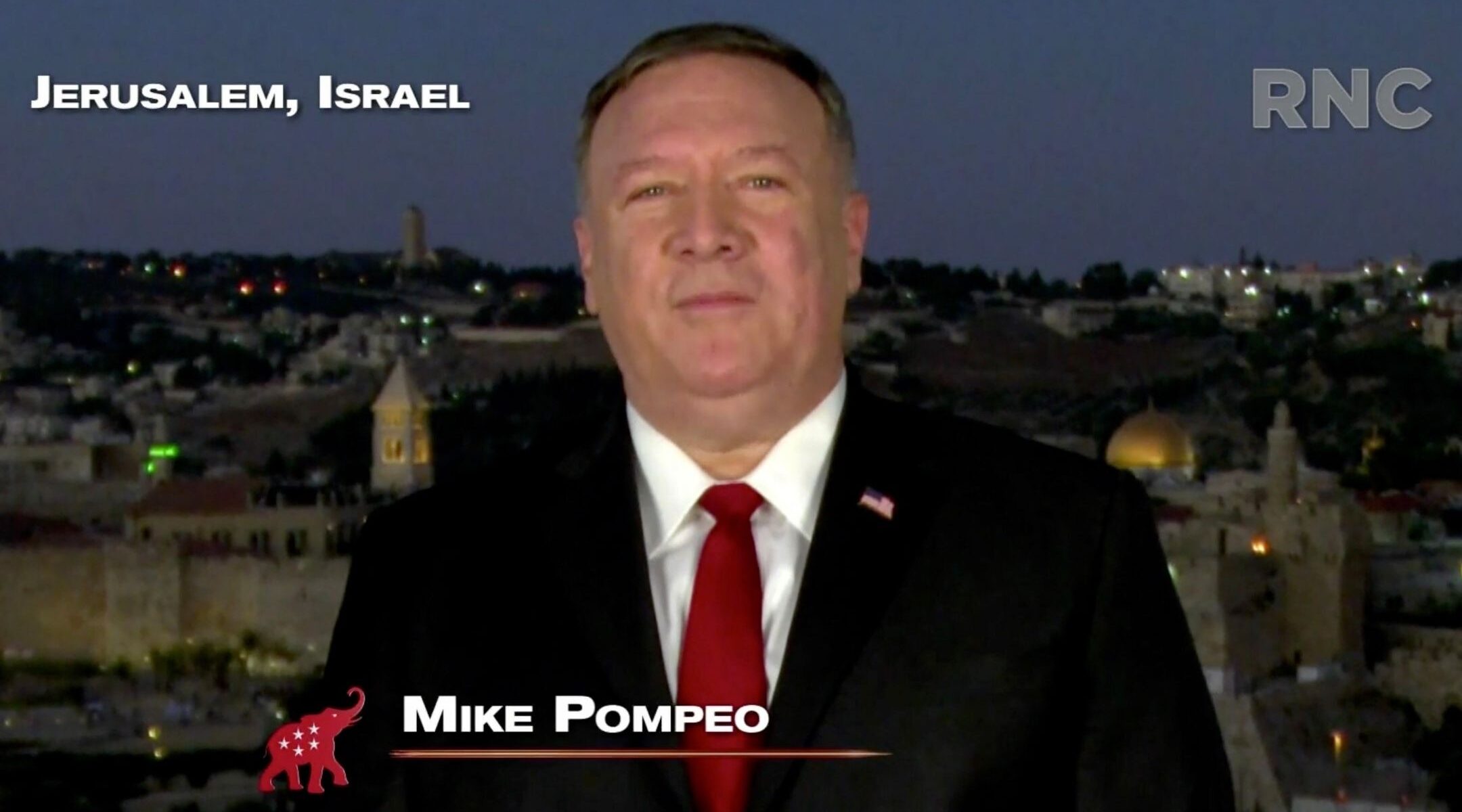 WASHINGTON (JTA) — A federal investigation said that Mike Pompeo violated the Hatch Act when, as Secretary of State, he addressed the Republican National Convention in 2020 from Jerusalem.

Pompeo’s Jerusalem appearance took up a substantial portion of the report, in part because he initiated a change to State Department policy banning employees from campaigning just days before his speech on Aug. 25 from atop the King David Hotel — a policy he had reaffirmed just months prior to his appearance.

Additionally, the bulk of Pompeo’s four-minute speech was dedicated to lauding Trump, said the report, and Pompeo also gave himself an exemption from a State Department policy banning employees and spouses from engaging in political activity while abroad.

“The ultimate effect was that while all other U.S. citizen State Department employees stationed overseas and their spouses and family members were not allowed to undertake many actions related to the 2020 election, Secretary Pompeo was permitted to record an address to the RNC, while traveling abroad to Israel, for the purpose of supporting President Trump’s reelection,” said the report.

It emphasized that Pompeo appeared to have been pressured by Trump into making the speech, but that did not exonerate him. There were formal requests to investigate Pompeo, including from Congress, almost as soon as the speech was broadcast.

The report named Miller, Friedman and Kushner for making media appearances in their official capacities in which they effectively campaigned for Trump’s reelection.

Friedman spoke on Al Ain, a United Arab Emirates-based news channel on Oct. 4, 2020, a month before the election. “Joe Biden was part of the Obama administration which negotiated and implemented the Iran deal … [which] created a pathway for Iran to gain a nuclear weapon [and] did nothing to restrain Iran from its malign activity,” the report quotes Friedman as saying.

The Office of Special Counsel is the agency designated to investigate Hatch Act violations, but does not itself have the authority to enforce them when violations are committed by Senate-approved officials and certain senior White House staff. The report and its lengthiness seemed aimed at underscoring obstructions to enforcement of the Hatch Act; for senior officials, only the president may initiate enforcement. That becomes a problem when the president (who is exempt from the act) appears to be encouraging his officials to violate the act, as the office alleges Trump was doing with Pompeo and the other named officials.

“The 2020 election cycle raised new and unanticipated challenges to OSC’s Hatch Act enforcement efforts,” it said. “OSC concludes that the Trump administration tacitly or expressly approved of senior officials violating the Hatch Act by campaigning for President Trump’s reelection. This conclusion is based upon the administration’s refusal to hold officials accountable for their violations, the frequency and similarity of the violations, and the fact that some administration officials repeatedly ignored the advice OSC provided to them.”