The latest battleground in the war over whether colleges are safe for Jews: Hunter College in New York City 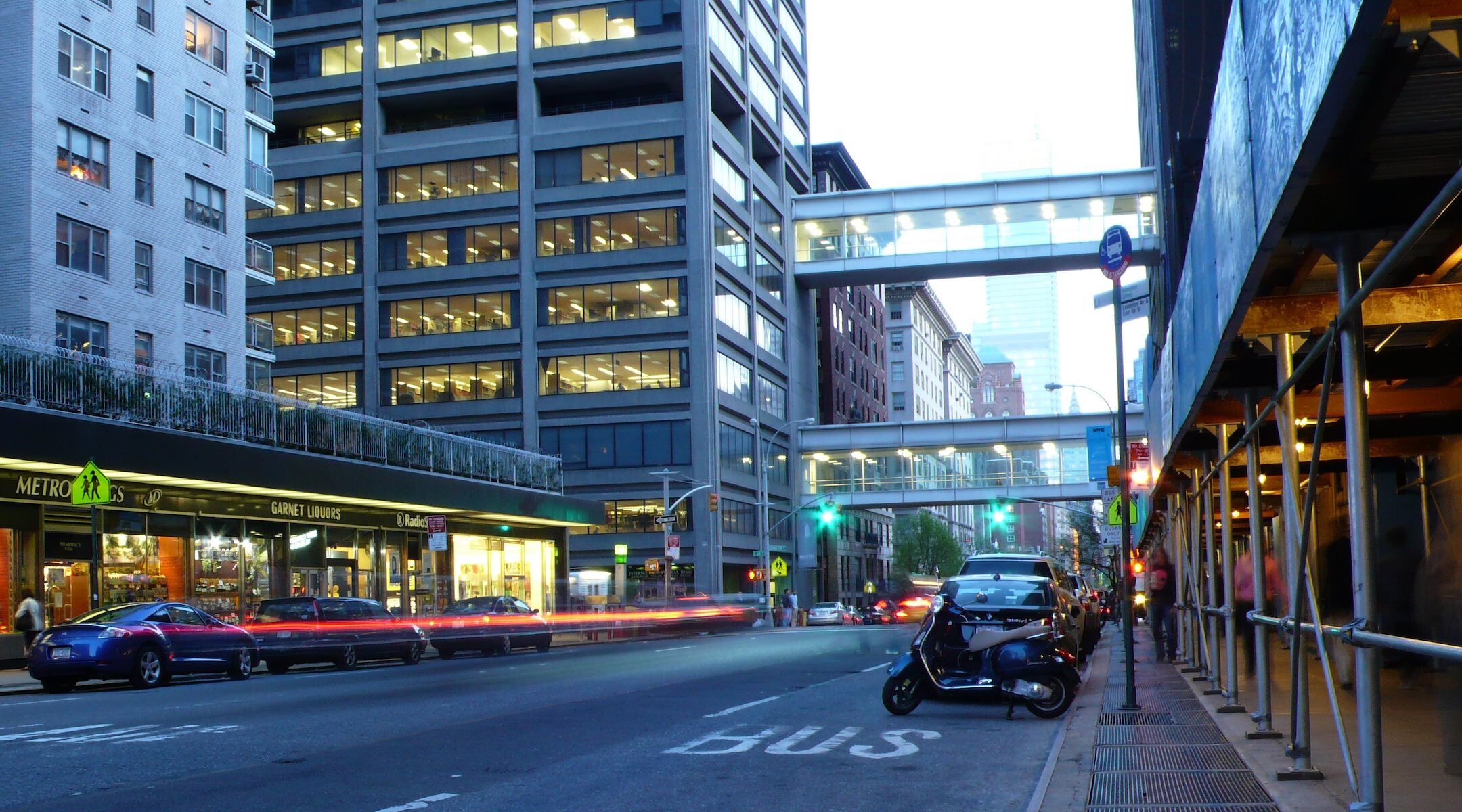 (New York Jewish Week via JTA) — Is the social work school at Hunter College coddling antisemitism, or is it part of an institution that’s deeply committed to protecting Jews from prejudice?

That question has come to the fore after a pro-Israel organization filed a federal complaint alleging a “pervasively hostile campus climate for Jewish students” at the New York City school and its Silberman School of Social Work, in particular.

And, as is often the case, the answer depends on whom you ask.

The complaint made on behalf of students by the California-based StandWithUs, filed last week with the federal Department of Education, was made under Title VI of the Civil Rights Act, which prohibits discrimination in federally funded programs. It paints a dire picture of the way Jewish students are treated at the school.

The StandWithUs complaint lists a series of alleged antisemitic incidents that it says the administration has not responded to adequately, including a disruptive anti-Israel protest during a Zoom class in May. According to the complaint, the alleged incidents have the effect of “leaving Jewish students with the clear impression that they are not equal members of the Silberman/Hunter campus community, and [are] therefore unable to participate fully in campus life.”

The complaint comes during a year when the CUNY system as a whole became embroiled in allegations of antisemitism. In April, the student government engaged in a heated debate over how to define antisemitism. In June, the faculty union passed a resolution calling Israel a “settler-colonial” state, and condemned it exclusively for its conflict with Hamas in Gaza in May. At least 50 professors resigned from the union in protest.

But speaking to The Jewish Week, Jewish stakeholders on campus, including the Hillel, have praised the Hunter administration’s work combating antisemitism — while they acknowledge tension and hostility over the Israeli-Palestinian conflict. A student leader told The Jewish Week that while she doesn’t feel targeted by overt antisemitism on campus, Jewish students often feel uncomfortable sharing their opinions on Israel for fear of drawing backlash, and that, at times, anti-Israel rhetoric does veer into antisemitism.

“As a Jewish person I’m not discriminated against,” said senior Jennie Reich Litzky, the Hillel student president, who is not a student in the social work school, and spoke for herself and not on behalf of Hillel. “I think there is definitely tension with the Israel-Palestine situation that makes it more difficult. But I feel like as a Jew, if I don’t share my political stance, I’m usually OK.”

Hunter, a campus on the Upper East Side of Manhattan that’s one branch of the City University of New York system, has approximately 23,000 students. According to Hillel, approximately 10% of them are Jewish.

Other Jewish organizations dispute StandWithUs’s characterization of Hunter, and say the school has gone above and beyond in defending Jewish students. Both the campus chapter of Hillel, the international Jewish student organization, and Hunter’s Jewish Studies Center, whose director has been a vocal opponent of anti-Israel activism, said they did not know the complaint was coming.

“I have felt profoundly the sense of support from the administration, who really, really understand how important this is on all levels,” said Leah Garrett, a Jewish historian and the Jewish Studies Center’s director. She was one of the professors who resigned from the CUNY union and wrote a column in July explaining that decision.

“I’ve never felt this kind of support from [another] administration in terms of me being a strong public voice, fighting, in every way possible, antisemitism,” she added.

The complaint is the latest in a series of similar filings under Title VI of the Civil Rights Act that pro-Israel groups have submitted to the Education Department. The complaints allege antisemitism at schools nationwide, including at the University of Illinois Urbana-Champaign and University of California, Los Angeles. In 2019, President Donald Trump signed an executive order mandating “robust” enforcement of civil rights protections for Jews on campus.

StandWithUs’s complaint centers on a pro-Palestinian protest during a Zoom class on May 20, the day the most recent fighting in Israel and Gaza ended. According to the complaint and Fox News reporting at the time, during a class in the social work school with around 200 attendees, a group of students changed their on-screen names to “Free Palestine: Decolonize” and took turns reading a 20-minute long manifesto accusing Israel of apartheid, ethnic cleansing and, according to the complaint, genocide.

In the chat accompanying the Zoom class, one protester reportedly wrote, “The Holocaust has been used as a tool. The fear of anti-Semitism as the fear of ‘this could happen again’ is being used preemptively to oppress and kill others.”

At least one professor allegedly participated in the protest. The professor in question was named by an anonymous student in the Fox News article, but not quoted. The professor did not respond to a Jewish Week request for comment.

The students and alumni named in the StandWithUs complaint also declined or did not respond to requests for comment, which were made directly by a reporter and via StandWithUs.

After the protest, according to the complaint, another professor defended the protesters. The complaint also says that while the school said it would investigate the incident, the complaining students were never contacted by the administration.

“This has been an ongoing problem,” said Carly F. Gammill, the director of the StandWithUs Center for Combating Antisemitism. “The continued lack of meaningful response from the administration really was the impetus for why this is happening now, obviously in light of the most recent incident in May.”

The school, as well as the Hillel and the Jewish Studies Center, do not dispute that the May 20 protest occurred, but tell a different story of the administration’s response. Hunter told The Jewish Week in a statement that it did conduct an investigation after the incident, which “resulted in formal reprimands.” But the school would not say who was reprimanded, what those reprimands entailed or whether Jewish students who complained were contacted by the administration.

Following the May conflict between Israel and Gaza, which sparked an uptick in antisemitism across the U.S., members of Hunter’s administration met with Jewish students to make sure they understood how to file formal complaints of antisemitism. Administrators also held a lengthy meeting with the Hillel board and offered to beef up security around the Hillel building.

In a statement to The Jewish Week, Hillel pointed to a condemnation of antisemitism from Hunter’s president, Jennifer Raab, who is Jewish, which was posted to Hunter College’s web site six days after the protest. Raab said the school is “deeply troubled by the recent outbreak of hateful anti-Semitic speech” and later added that “We can and must do our part to dispel hatred, particularly in our own community—online as well as in person.”

“The administration was quite responsive when we explained that our students were feeling unsafe and bullied online,” Merav Fine Braun, the Hillel’s executive director, said regarding reports of campus antisemitism in the wake of the May conflict. “They responded to each of the students’ complaints individually and as a group.”

In a statement to The Jewish Week, the social work school characterized the May 20 incident as an exchange of “strong and, at times, heated opposing viewpoints and sentiments about the recent conflict in the Middle East” that temporarily disrupted the class. The statement also said the school “takes very seriously any allegations of anti-Semitism” and has been examining its “curriculum, programs, and school environment to ensure it is devoid of anti-Semitism in all of its forms.”

The social work school posted Raab’s statement on its own site as well. But the StandWithUs complaint faults the social work school for not putting out its own public statement against antisemitism, as it has regarding anti-Black and anti-Asian racism. And Gammill said that the fact that students told StandWithUs they didn’t know about the school’s investigation “speaks volumes about the lack of transparency of this administration.”

The complaint also lists a series of other alleged incidents, including two allegations in which faculty members suggested to Orthodox students that their being Orthodox would hinder their ability to work with patients. A Hunter spokesperson told The Jewish Week that the school had not been aware of those allegations and would investigate.

Multiple allegations center on Students for Justice in Palestine, an anti-Zionist group. One item in the complaint, which made news at the time, concerns a 2015 rally at Hunter co-organized by SJP that featured chants of “Zionists out of CUNY” and “Long live the Intifada.” A report on antisemitism commissioned by CUNY and published the following year said, “There is evidence that some members of the crowd shouted ‘Jews Out of CUNY’ and ‘Death to Jews.'” Hunter and CUNY leadership condemned the antisemitic remarks at the time.

Students for Justice in Palestine at Hunter did not respond to an email seeking comment.

One section of the complaint alleges that a professor publicly called a student “Rachel,” which is not her name, after the student said she wouldn’t be able to eat non-kosher pizza at an event. The complaint adds that the incident was “eerily reminiscent” of a Nazi policy to rename Jews with the names “Israel” and “Sara.” Gammill said she stands by that comparison as “explanatory information for anyone reading the complaint, certainly anyone who might be investigating the complaint, to understand that background.”

Garrett, the Jewish Studies Center director, said that Hunter has supported her department in public-facing efforts regarding antisemitism, including a monthly speaker series that has often addressed the topic as well as an upcoming program in which student fellows will study antisemitism and create programs to combat it. In December 2020, an adjunct Jewish studies professor spoke to social work faculty about the history of antisemitism.

“I always feel lucky to be at an institution that is so deeply protective of Jewish faculty and Jewish students,” Garrett said. “It’s been a nonstop sense since I’ve been hired, nearly four years ago, that it was really, really important to have a broad approach to antisemitism to make students here feel safe.”

Reich Litzky, the Hillel student president, said that she has seen antisemitic speech from Hunter students on social media. And while she understands that the school is limited in how it can police online spaces, she wants the administration to be more active on the issue and says it should take “some responsibility” to address online antisemitism among its student body.

“I think the administration has been supportive,” she said. “I  definitely think that they’re acknowledging what’s happening. I don’t know if they’re doing something about it.”