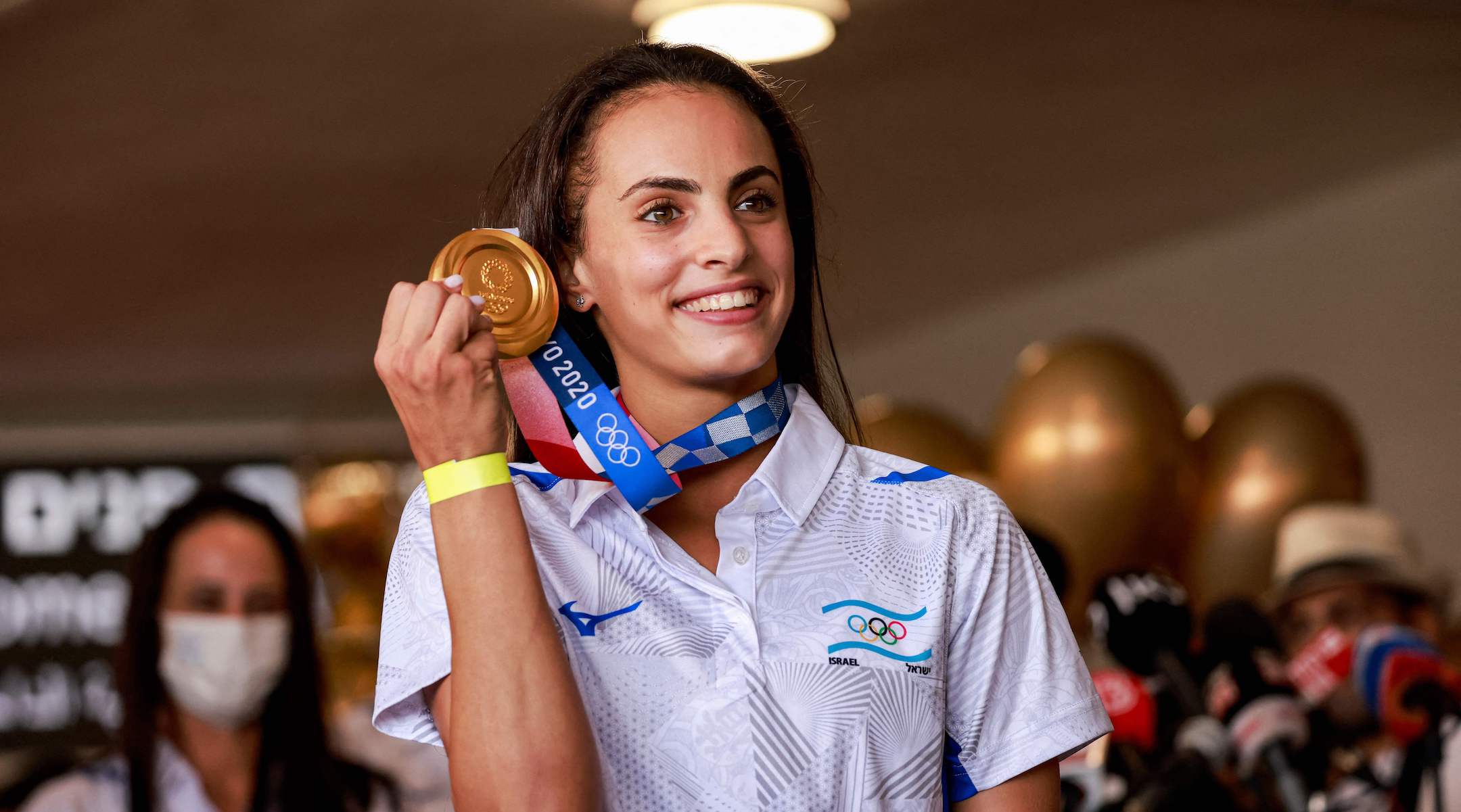 (JTA) — This summer, Linoy Ashram became the first Israeli woman to win an Olympic gold medal, in any sport, when she eked out a victory in individual rhythmic gymnastics.

But that wasn’t the only history she made at the Tokyo games.

She became only Israel’s third-ever Olympic gold medalist, and the first Israeli rhythmic gymnast to win gold. Ashram’s win also broke a streak of Russian gold medalists going back to the 2000 Sydney Olympics. (And before the five Russian wins: 1996 and 1992 were won by Ukrainian women, and 1988 by a Soviet Union gymnast.)

No big deal, right? The 22-year-old looks back on it with humility.

“I didn’t dream of winning the gold,” she told the Jewish Telegraphic Agency. “I would never have expected that I could do it — I was hoping for the bronze.”

For those who hadn’t been following her triumphs in European tournaments for years, Ashram’s accomplishments in Tokyo made her an Israeli sports icon — one who rose from a working class background in the city of Rishon LeZion, where she grew up training “without infrastructure, without backing,” to the new face of Israel’s Olympic success on the global stage.

“It’s true that this sport is dominated by people from Eastern Europe,” Ashram said. “The best athletes are from there. When I was small, I never imagined that it would be possible to reach their level because it [felt like] their sport. But as I went from competition to competition and I got better, I began to realize that it doesn’t really matter where [you’re from] or who dominates the sport I can still win it because of who I am.”

“I’m very proud of my country and I’m proud to represent my country in the best way that I can,” she added. 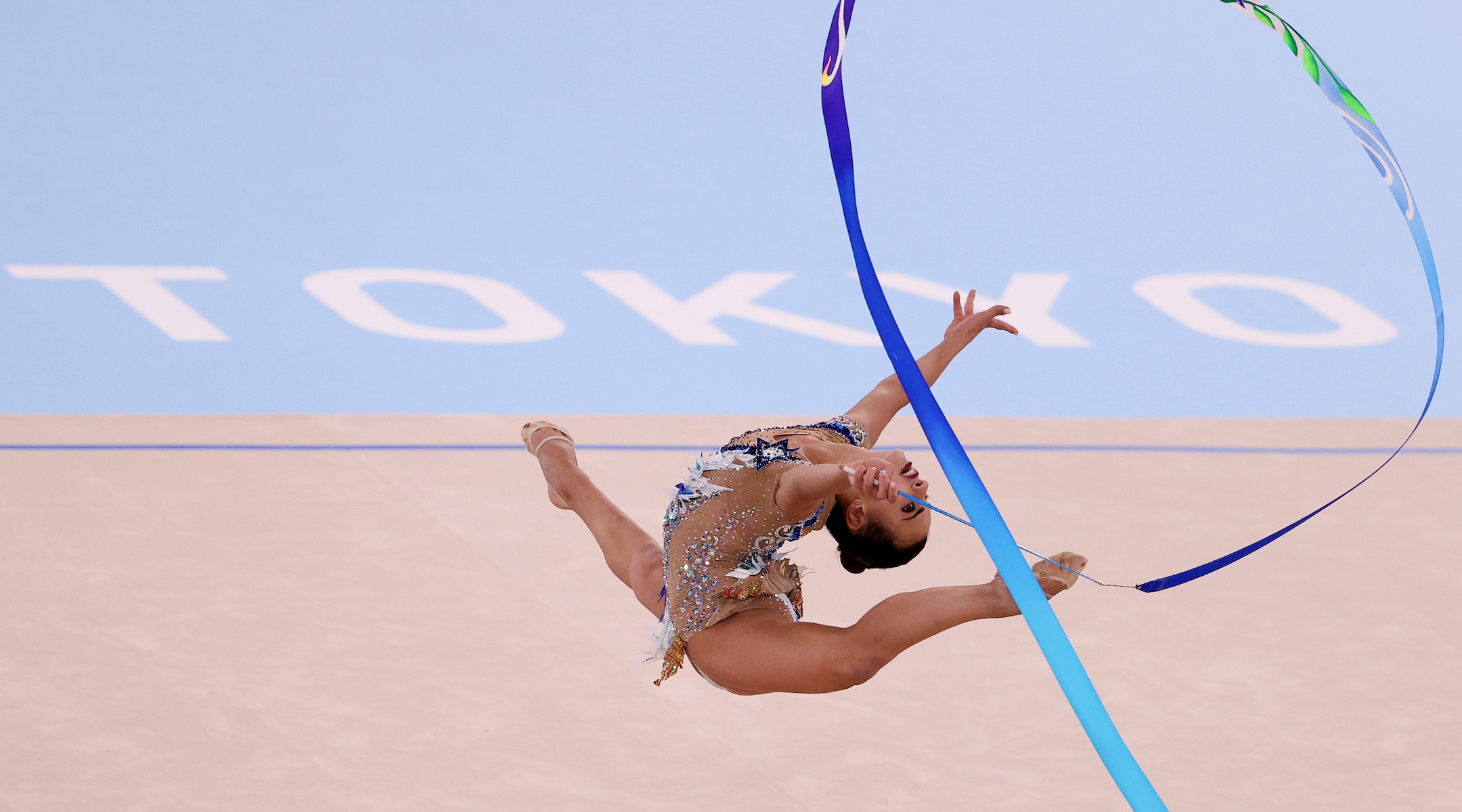 As U.S. gymnastics superstar Simon Biles highlighted with her many mental health-related withdrawals from her contests this year, Olympic competition and stardom is not all fun and lighthearted. Winning, for Ashram, was in reality “a mixture of feelings.” Her family wasn’t allowed to watch her performances because of the COVID-19 restrictions. There was stress along with the happiness —  and relief that the competition had ended.

That is likely in part because her victory came down to the wire, with what her Russian opponents would like to call a controversy.

Ashram narrowly beat out her Russian competitor, scoring just .15 of a point higher than Dina Averina, spurring the Russian Olympic Committee to call the result an “injustice” and submit an official inquiry. The International Gymnastics Federation dismissed any allegations of unfair judging. But the PR damage was done, and Ashram was hit with a wave of online criticism and insults.

She didn’t let the row impact her.

“I really didn’t pay attention to what they were saying — [my coach and I] were completely focused on the win,” she said.

Ashram was born in Rishon LeZion, a city about five miles south of Tel Aviv, to a Yemeni Jewish father and a Greek Sephardi Jewish mother.

“I was especially proud of the fact that I could prove to others that even though this sport [has been] dominated by Eastern Europeans, I could win it and I could bring something new to it. And it’s not a given fact Eastern European athletes [win],” Ashram says.

The sport — or any other in the Olympics, for that matter — is also not usually dominated by a Jew. Ashram showed off her Jewish pride by performing her gold medal routine to “Hava Nagila,” which will of course go down in history next to another iconic Jewish gymnastics moment: Jewish gymnast Aly Raisman’s floor routine at the London 2012 Olympics to “Hava Nagila,” which she also won gold for. Ahead of the 2012 Games, Raisman told JTA she was proud to be using the Jewish song “because there aren’t too many Jewish elite [athletes] out there.”

“We brought in ‘Hava Nagila,’” Ashram said, “because we wanted to bring to the Olympics this year something Israeli, something Jewish. I know that they’ve used it in the past at the Olympics, and it shows how much we’re really connected to the country and we want to bring this Jewish touch to the world.”

Rhythmic gymnastics was introduced to the Olympics in 1984. In the sport, gymnasts compete with four different apparatuses: hoop, ball, clubs and ribbon. Ashram has no favorite among the four; each requires a different style, and different music. She excitedly described how she and her coach pick the music to match each apparatus: the hoop is “dramatic,” the ribbon is “joyous,” the ball is “romantic,” and the clubs are “groovy.”

Ashram’s choice for her clubs routine in Tokyo was a mash-up of Beyoncé and Ciara pop hits, but for the  ribbon routine, “Hava Nagila,” a staple of Jewish celebrations everywhere, checked the “joyous” music box.

Ashram also has praise for Raisman’s former teammate, Simone Biles, and the conversation around athletes and mental health that she turbo-charged this year.

“I’’m glad that she recovered after what happened,” Ashram said. “Athletes also have mental health crises. I’m really happy that she was able to overcome it and go back and train and to be part of the Olympics — she left in the middle, but then she came back for the final exercise, and it shows what a strong character she has.”

Ashram has a quiet personality. On her days off — she hasn’t yet committed to the next Olympics in Paris in 2024, but she is still training as she normally does — she likes eating her family’s chicken schnitzel at home, and going to the beach or the movies. Though Israel is currently in full sufganiyot mode for Hanukkah, she’s not a big fan of the traditional jelly donuts. Still, she looks forward to the holiday and being able to enjoy it with her entire family.

She’s still adjusting to the public facing side of being a star athlete. After Hanukkah, she’s set to visit the United States for the first time, as part of the Israeli American Council’s National Summit 2021 in Florida. It’s the first major Jewish organizational gathering to take place in-person since the start of the pandemic, and Ashram is excited to speak.

“I’m especially excited to be meeting another kind of audience — not [just] Israelis in Israel. It’s exciting to be able to address new audiences,” she said. 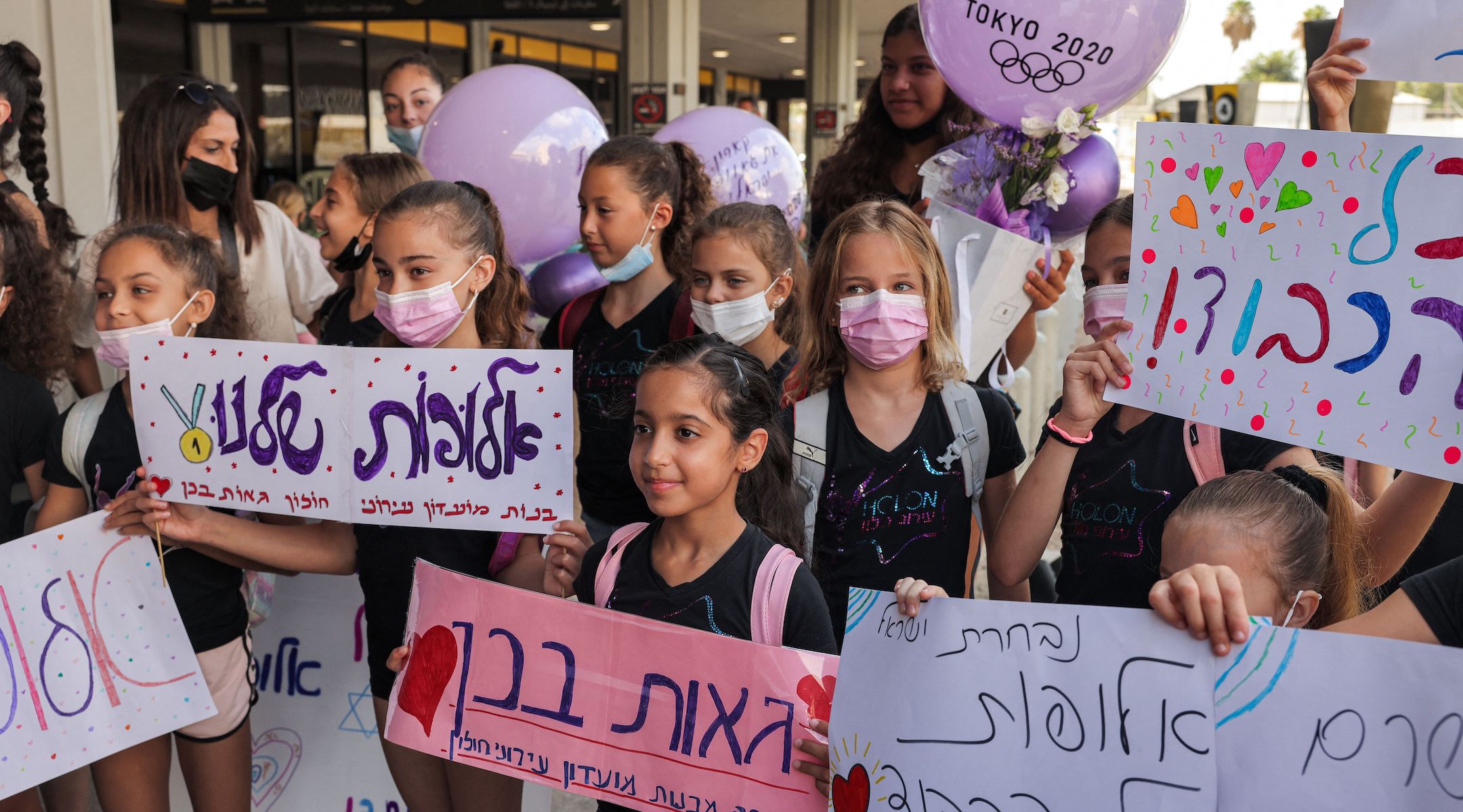 Returning home to Israel and her family after the Tokyo Games hit home the fact — quickly — just how drastically her profile had grown. She received a “hero’s welcome” at Ben Gurion Airport and called it “really amazing and moving.” The excitement over her hasn’t slowed down yet.

“On one hand, it’s really nice because I love receiving all this warmth and love from people, and know that people are happy for me,” she said. “On the other hand, it’s hard for me to walk out in the street [when] people are recognizing me all the time.”

In disbelief, she recalled a moment when she was wearing her face mask and hat — and someone still recognized her.

“My life has certainly changed a bit,” she said.